SOUTHERN UTAH — The Sky Report is presented as a public service by the Stellar Vista Observatory, a nonprofit organization based in Kanab, Utah, which provides opportunities for people to observe, appreciate and comprehend our starry night sky. Additional information is available online. Send questions and comments to [email protected]. 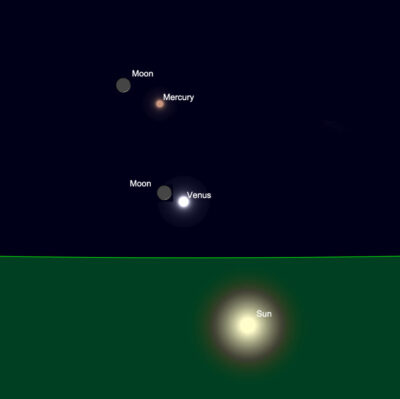 This is the best week of the entire year to see the elusive planet Mercury, as it achieves its greatest angular distance from the sun – 22 degrees – on May 17. You should easily see it without binoculars, but you do need a low northwestern horizon, important to see Mercury but essential to see Venus just below. A half hour after sunset, the sun is only 5 degrees below the horizon while Venus and Mercury are 5 degrees and 14 degrees respectively above the horizon. If you can see clear down to the geometric horizon, you’ll see brighter Venus first and then fainter Mercury above it.

Especially good nights to look are Wednesday, when the very thin crescent moon is a scant 1½ degrees from Venus, the closest they will come this year; and the next night, when the moon is 4 degrees to the upper left of Mercury. Both nights the moon will be the slimmest of crescents and won’t be obvious; use binoculars.

After this week, Mercury rapidly leaves the evening sky – you can watch it descend night by night – but Venus very slowly increases its distance from the sun, sets later and become easier to see. Watch nightly; can you estimate the date when Mercury will pass Venus?

Mars is 30 degrees above and to the left of Mercury, in the middle of Gemini the Twins. The moon joins Mars on Saturday, when it’s less than 2 degrees from Mars in one of the year’s closer conjunctions. The moon approaches Mars as the evening progresses and they’re closest as they set, so you can actually watch the moon approach Mars. The moon is many times brighter than Mars, which is no longer especially bright. Mars is 800 times more distant than the moon.

Put these moon-conjunction dates in your calendar so you don’t forget; they won’t repeat. In all cases, both objects are visible together in binoculars.

Two other planets are visible tonight, making five in total, and they are Jupiter and Saturn in the morning sky. Look low in the southeast between one and two hours before sunrise. Jupiter is brilliant while Saturn to the right, or west, is 1/13th as bright. How late in the morning as the sky brightens in morning twilight can you still see Jupiter? With binoculars you should see it until sunrise.

Written by JOHN MOSLEY. John Mosley was program supervisor of the Griffith Observatory in Los Angeles for 27 years and is the author of “Stargazing for Beginners” and “Stargazing with Binoculars and Telescopes”. He and his wife live in St. George where he continues to stargaze from his retirement home while serving on the advisory committee for Stellar Vista Observatory.

See that bright thing in the sky? Mars is calling