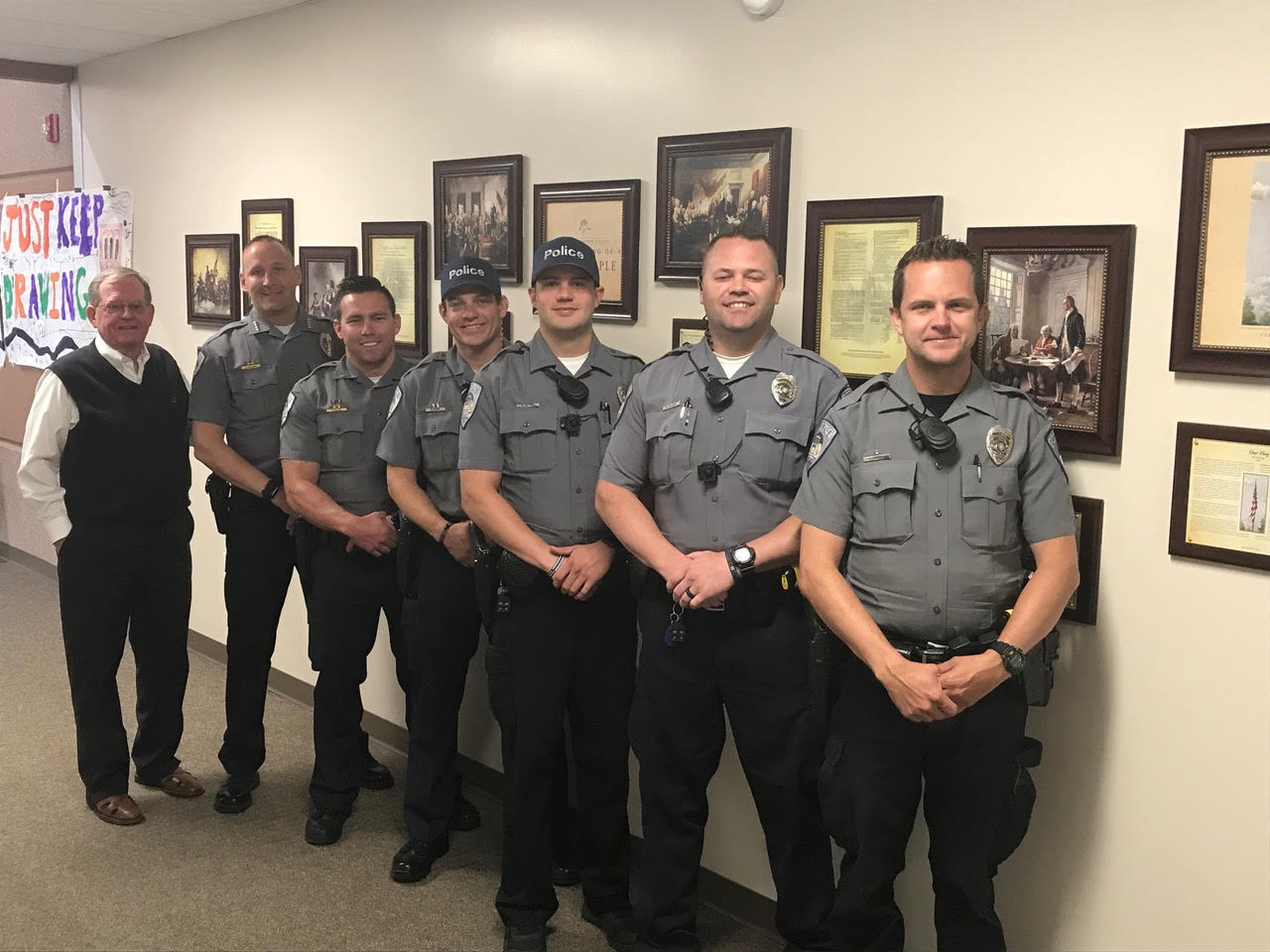 Principal Travis Wilstead was approached earlier this year about the prospect of working together to install an Exchange Club sponsored Freedom Shrine in one of the school’s hallways for display as an educational benefit for the school’s students.

Wilstead was excited about the prospect of having the beautiful display for his students to enjoy now, and for years to come and agreed to have the school pay half of the $1,500 cost and the Exchange Club would pay the other half for the Freedom Gallery chosen.

Loosli ordered the display and delivered it to the school so they could arrange for their staff to install it in a prominent location close to the front office where it would be seen by students, staff, parents and others who might frequent the school. He suggested they might want to consider holding the Freedom Shrine Dedication on the same day as the school’s annual assembly. It was decided that May 17 would be the best time, right before the students left for the summer. 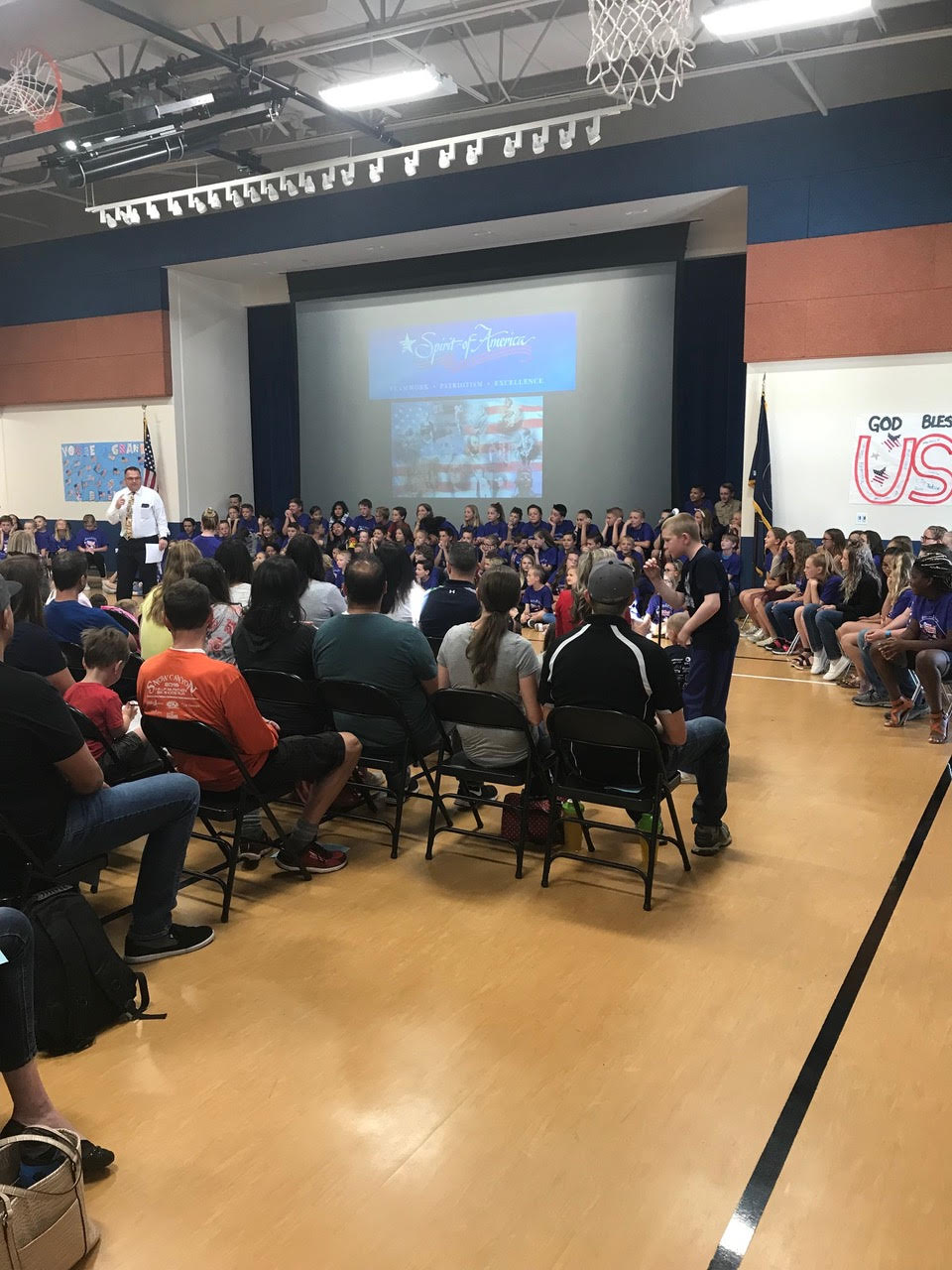 Loosli was asked to invite representatives from the school district, the Washington City Mayor’s office and the local police and fire departments. He was surprised to hear that Majestic Fields Elementary has five fifth grade classes with approximately 135 students.

The assembly started at 9:30 a.m. and all the fifth grade students’ parents were invited to attend. The school’s auditorium was packed and had to set up additional chairs to accommodate all the parents and guests.

The school had conducted a contest where fifth grade students could submit their artwork for consideration as a design for the front of the Give Me Liberty t-shirts the fifth grade students wore to the assembly. They are a bright blue with an eagle and flag on the front. There was a students’ provided flag ceremony, the singing of the National Anthem and recitation of the Pledge of Allegiance.

The assembly was over an hour long with the students singing various songs, including “Spirit of America,” “Leaders of Tomorrow,” “Grand Old Flag,” “Fifty Nifty” which highlighted all fifty states, “American Presidents,” “Proud to be an American” and “Thank You Soldiers.” 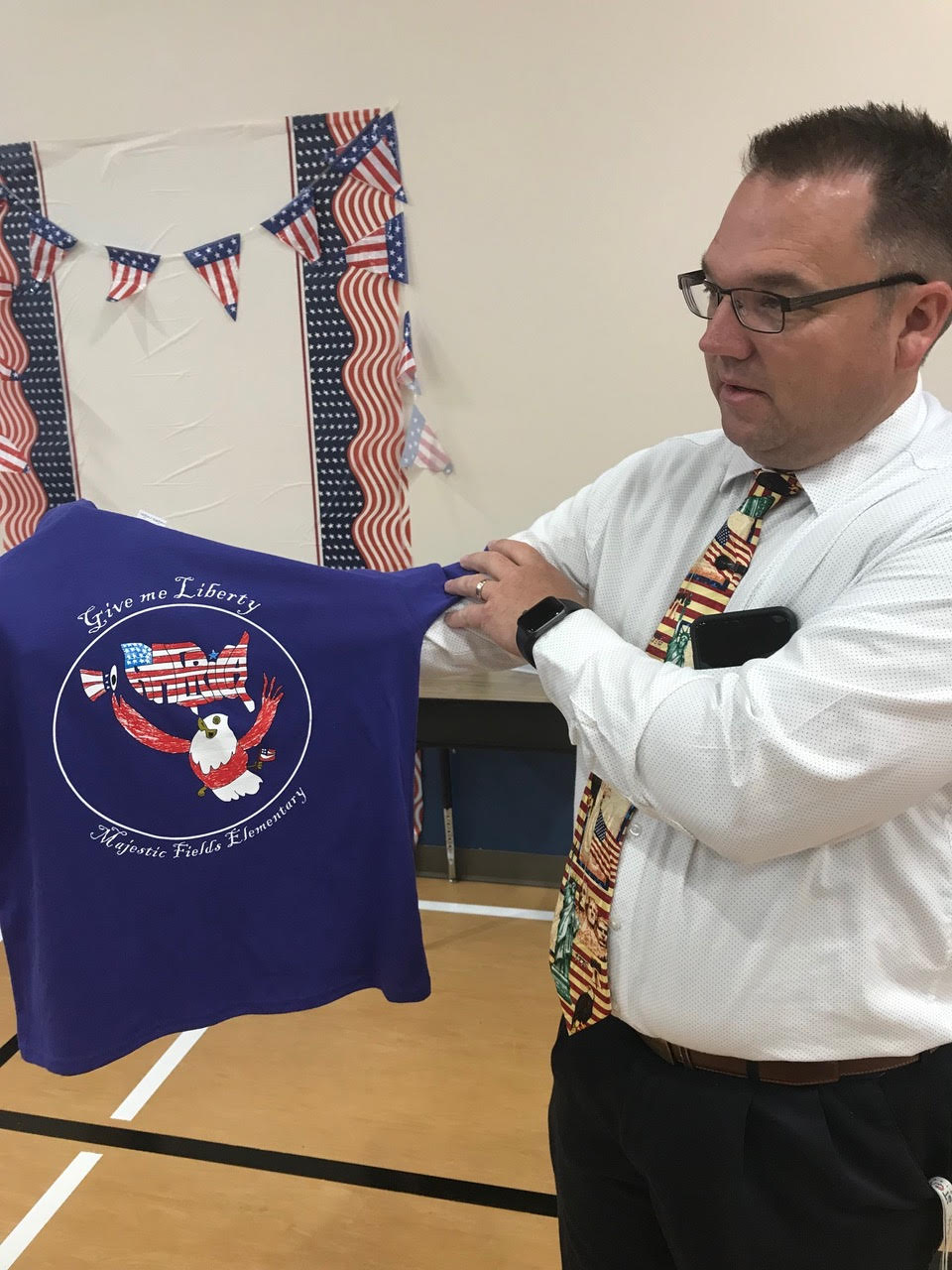 The patriotic program also included a small group of students reciting the Gettysburg Address totally from memory. There were 25 students who had passed off all the requirements as part of the Give Me Liberty Program and they were introduced individually and given a certificate and award medallion.

Loosli was then introduced to the group and allowed to say a few words about the work of the Exchange Club of St. George and their contributions to the community. He presented a $200 check to Wilstead to be used to help offset the cost of the medallions.

The Freedom Gallery display had been installed over the weekend prior to the assembly but then covered so the students couldn’t see it. The students were asked to write their guess in the form of graffiti all over the cover of what was behind the cover. The last step in the assembly was to broadcast the uncovering of the Freedom Gallery on the screen in the front the auditorium for all to see.

Each student was given a participation certificate by class and then had a chance to walk down the hallway back to class and view the display. There were a number of members of the Washington City Police Department out in the hallway saying “hi” and giving the students a high five.

All in all it was a great morning and should have given the kids additional pride to be living in such a great state and nation.