CEDAR CITY — Landslides can cause injuries and death and extensive damage to landscapes, roads and structures, leaving large amounts of debris in their wake.

Millions of years ago, three massive landslides rocked the ancient landscape of southwest Utah, creating enough debris to fill the Grand Canyon nearly to its rim.

Geologists have dubbed the ancient slides the Marysvale gravity slide complex. And it could be the largest such complex on land in the world, encompassing approximately 3,000 square miles, an area “roughly the size of Yellowstone National Park,” according to the Utah Geological Survey booklet, “Utah’s Ancient Mega-Landslides,” written by Robert F. Biek, Peter D. Rowley, and David B. Hacker.

One of these events, the Markagunt Slide, was approximately 60 miles long, 23 miles wide — at least 1,150 square miles — and estimated to be over one mile thick in some areas, according to the publication.

Comparatively, the largest terrestrial landslide in recorded history occurred in connection with the eruption of Mount St. Helens in Washington state in 1980, which traveled about 14 miles and had a maximum depth of 600 feet, according to the U.S. Geological Survey.

A gravity slide is “a special class of extremely large and geologically complex landslides several tens to thousands of square miles in extent,” the booklet says.

“They are larger and far more interesting than geologists could ever have imagined,” the authors state. “Though crisscrossed by highways and dotted with a dozen small towns, including Beaver, Parowan, Panguitch, and Cedar City, the mega-landslides remained hidden in the landscape until the mid-2010s.

“These ancient landslides are home to thousands of Utahns and are traversed by millions of tourists each year traveling to southern Utah’s famous red rock country and national and state parks and monuments. You might ask yourself, ‘How can something so large escape our notice for so long?”‘

According to their research, the remains of the slides are “chopped up by subsequent faulting, are deeply eroded and partly buried by younger deposits,” so there isn’t a single vantage point to view them.

The Markagunt, Sevier and Black Mountains slides, each named for the plateaus where they are best exposed, were discovered between 2014-19, according to the booklet.

Robert “Bob” Biek, a retired senior scientist with the Utah Geological Survey, told Cedar City News that evidence of the ancient landslides was discovered by happenstance.

Biek, who retired in June 2022 after 25 years with the agency, has continued to research “these gigantic landslides” and complete geologic mapping in the St. George basin, Zion National Park, the Cedar City area and Bryce Canyon National Park in Southwestern Utah.

“Because it’s so much fun,” he said. “Utah just has the most tremendous kind of in-your-face geology of anywhere that I know of.”

In the 1970s, a graduate student from Ohio State University was working on a geologic map for his thesis near Brian Head Peak. He was mapping the volcanic rocks in the area when he discovered “little hills,” now called Sydney Peaks, where the rocks were out of sequence, Biek said.

“Imagine just a section — you’re going up from older rocks to younger rocks and then all of a sudden, you get back into older rocks,” he said. “And so they were really puzzled about that.”

More examples of the phenomenon were found but ultimately, research halted in the 1990s. Biek said when he began to map the area, he “stumbled” upon the old discovery from decades prior.

“And then I found some really exciting examples of it that broke the whole case open,” he said.

The first of the three “gigantic landslides” was discovered in 2014. Biek said once his team realized how “big and important and unique” the slides were, they requested involvement from universities across the country with various expertise to study different facets of the slides.

Additionally, a three-year study is being funded by the National Science Foundation to better understand the events, Biek said.

Millions of years ago, it was home to dozens of “very large” volcanoes,” Biek said. He compared the “cascade-style” volcanoes with Mount St. Helens and Mount Shasta, which are both part of a chain of volcanoes in the Pacific Northwest and the Pacific Ring of Fire.

“This volcanic field is a little unusual compared to most of them elsewhere in the world, just because it’s built on a very weak foundation,” he said.

Geologists believe that the crust was deforming under the weight of the growing volcanoes, Biek said, adding that the shallow crust was also inflating due to rising magma. At some point, a “catastrophic collapse” involving multiple volcanoes was triggered. The volcanoes grew and collapsed three times between 25 and 18 million years ago.

“Kind of like Mount St. Helens, but a thousand times bigger,” he said. “Nothing like this has ever been witnessed by humans. These are fortunately very, very old.”

The “ultimate trigger” of the landslides is still unclear but was likely either a volcanic eruption or earthquake, Biek said.

“It was so perilously unstable that anything that happened would trigger it,” he said. “… Maybe it was the proverbial butterfly that landed on the volcano.”

The resulting complex was larger than Washington County and is “virtually unique in the world, being so big,” Biek said. Southern Utah’s slides can be a few acres or square miles in size.

The slides, moving at freeway speeds, would have “totally demolished the landscape” in minutes and would have “created a brand new landscape,” Biek said, adding that it dammed former drainages, creating lakes, the sediments of which can still be found today.

Evidence of the slides, like deformed rock, can be found throughout the region, near Brian Head Peak, in Bryce Canyon National Park and other locations. Much of the booklet is devoted to helping readers seek out about a dozen places, using maps and pictures, where “bits and pieces” of what the slides’ remains can be seen, Biek said.

Importantly, the landscape at the time was “entirely different,” with high plateaus similar to those found in the Peruvian Andes and “studded with volcanic mountains,” Biek said.

The Basin and Range Province, the Beaver basin and Cedar Valley didn’t exist yet. The area that the landslides occurred on was almost flat with a 1-3-degree slope, unlike the steep side of a volcano.

While geologists continue to research the slides’ movement and speed, they were likely due to the slippery base of clay-rich soil present under the volcanic field, among other factors, Biek said.

More than the slides themselves, Biek said that he hopes readers benefit from the “process of discovery” while reading the booklet.

“It’s my co-authors on this book,  Peter Rowley and David Hacker — I’ve worked with them for a dozen years now on these — but there’s just scores of people that have looked at geology in Southwest Utah that have in various ways contributed to our understanding.”

To learn more about the Marysvale gravity slide complex and where to see evidence of these ancient landslides, click here. 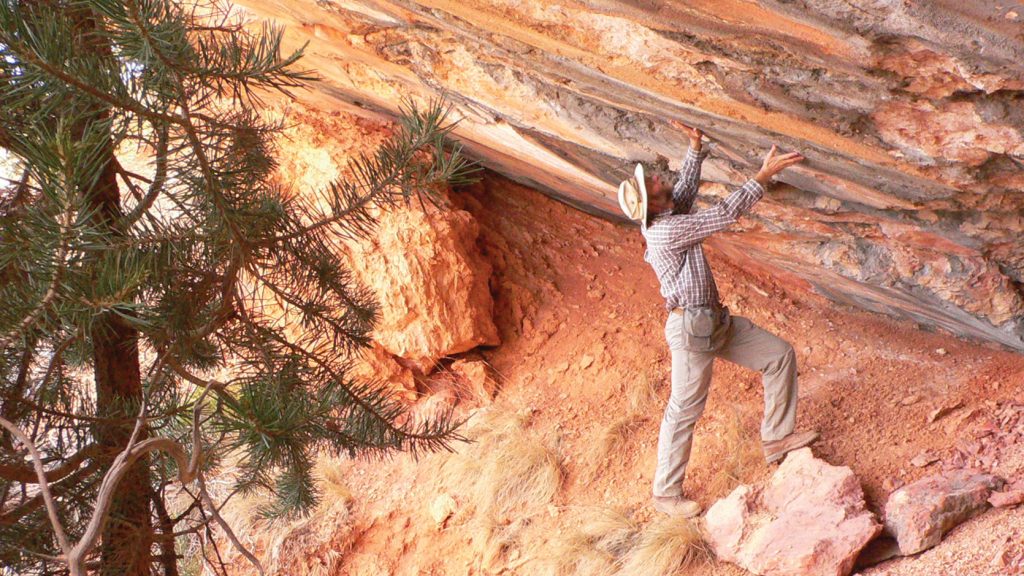 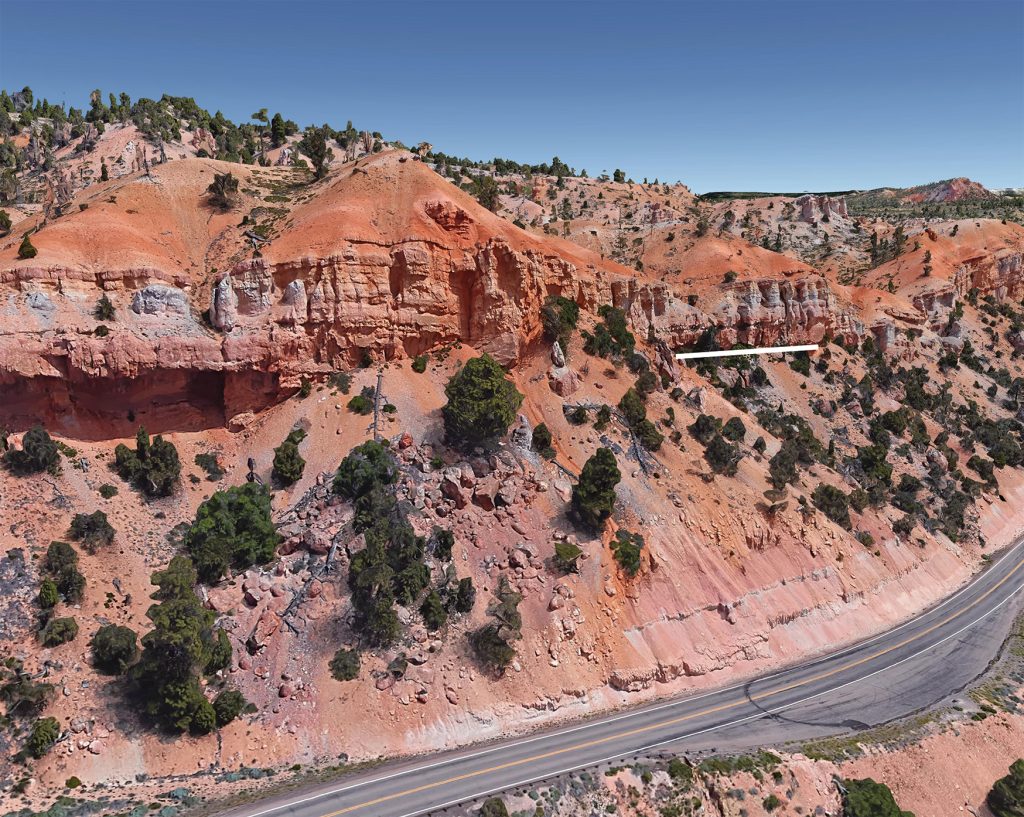 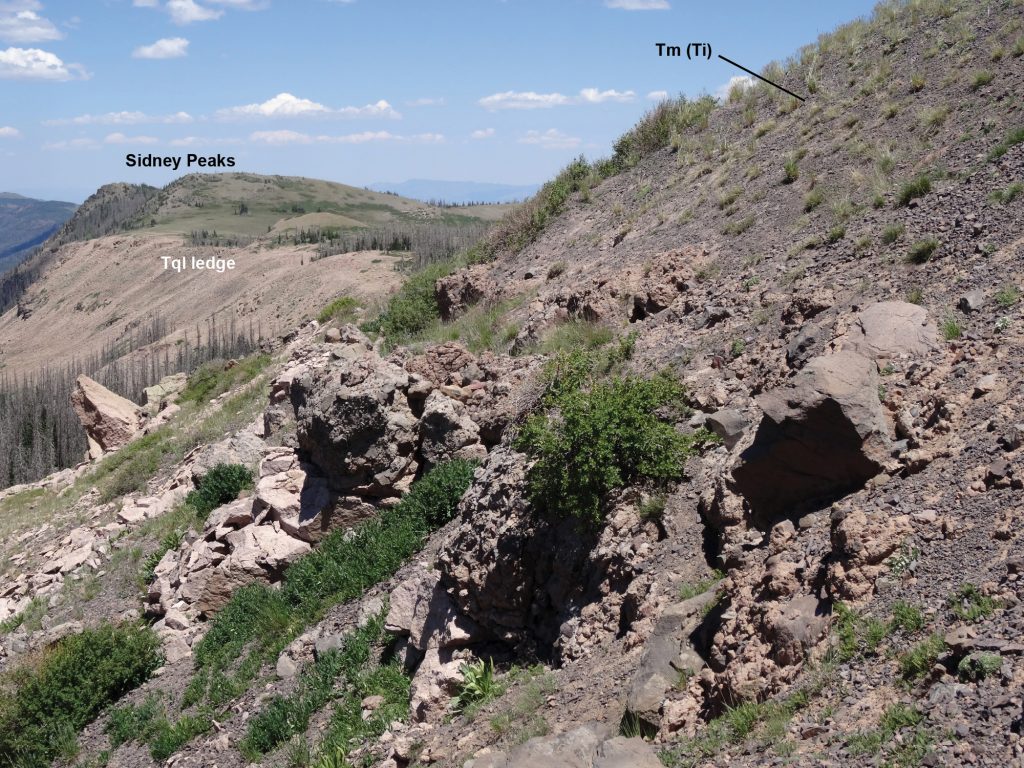 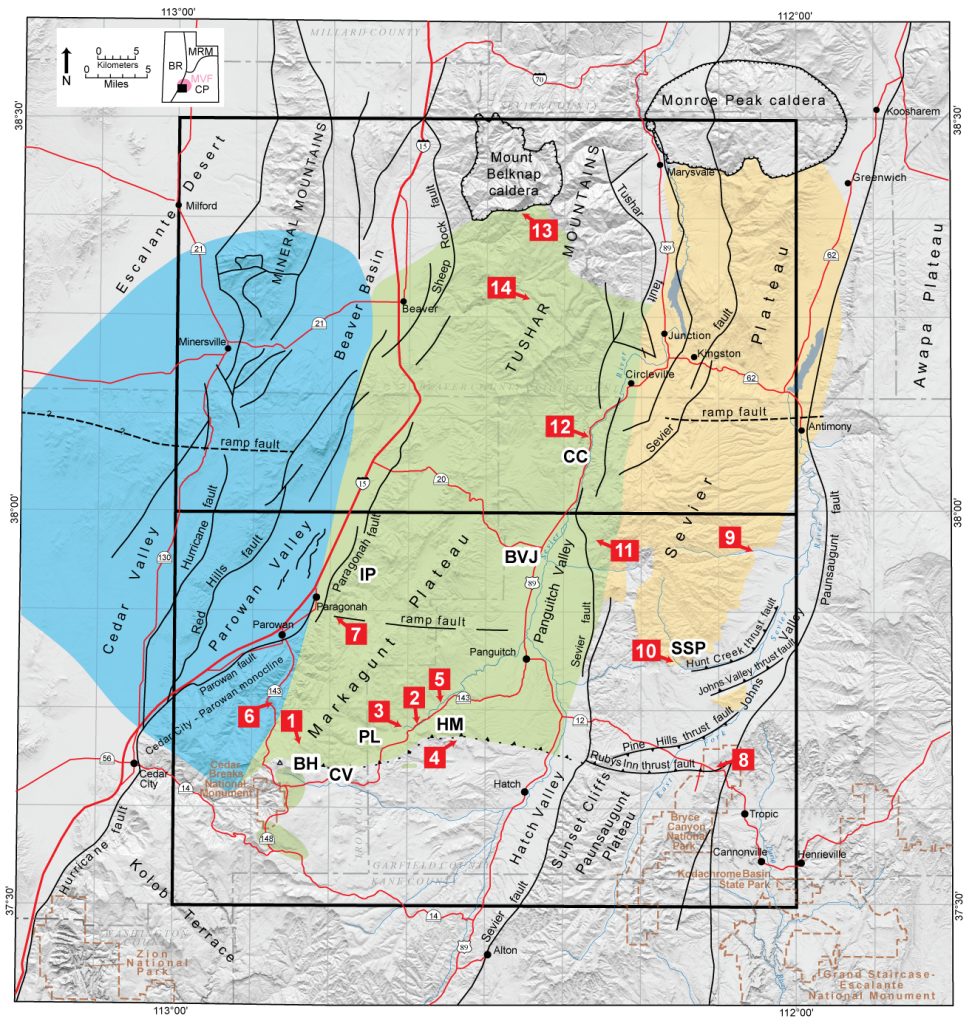 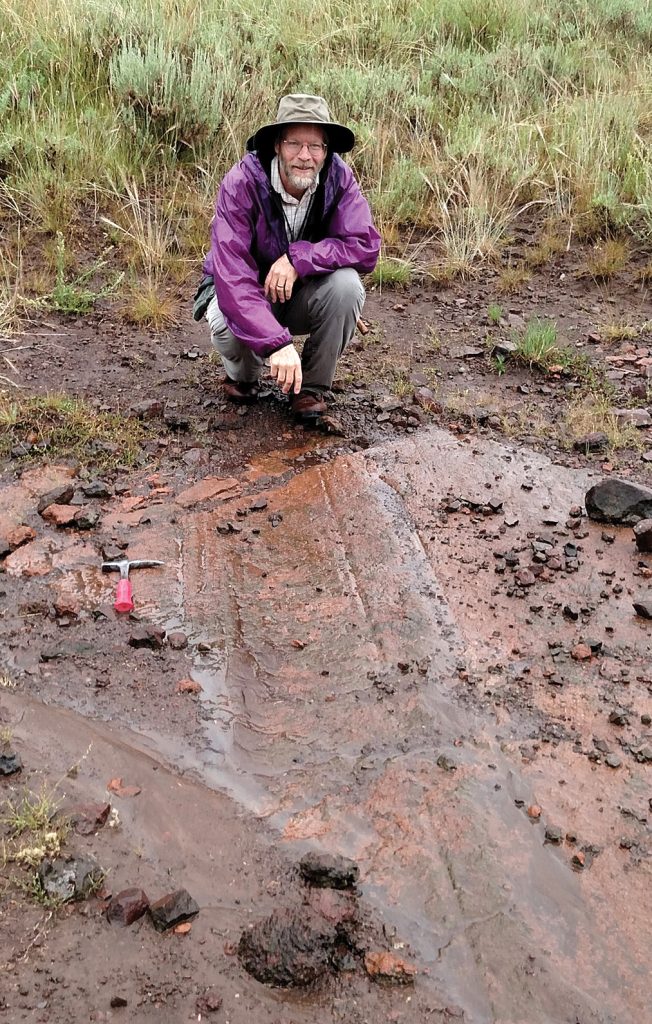 A grooved and striated surface that developed on the Isom Formation due to emplacement of the Markagunt mega-slide, showing that the slide moved nearly due south, toward retired senior scientist Bob Biek, date and location not specified | Photo courtesy of the Utah Geological Survey, Cedar City News 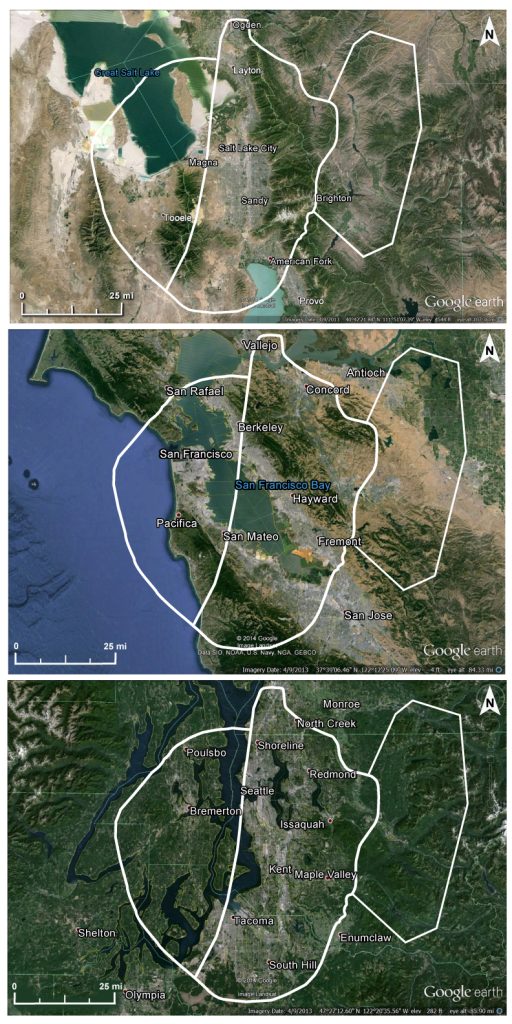 The size of the Marysvale gravity slide complex compared to the Wasatch Front, the San Francisco Bay and the Seattle area to "dramatically show its gigantic scale" | Image courtesy of the Utah Geological Survey, Cedar City News 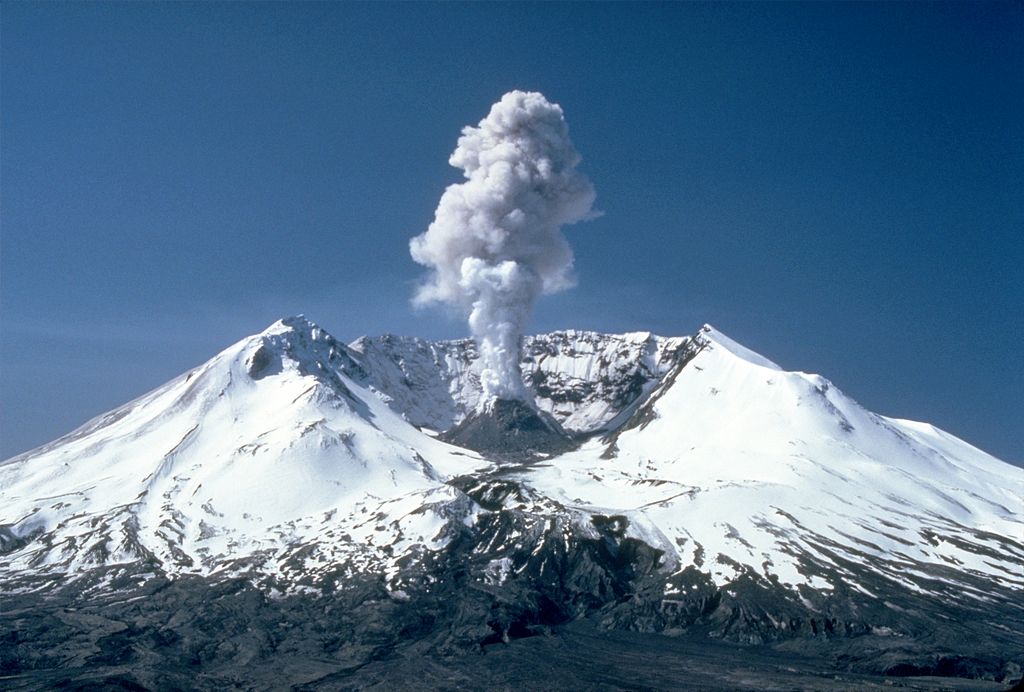 Alysha Lundgren joined the St. George News team in 2022. She began her career as a freelancer, writing resource articles for families of children with disabilities. She's also covered topics such as astronomy, recreation and nature. Originally from Nevada, Alysha fell in love with Utah quickly after moving to Cedar City. In her free time, she enjoys wandering and photographing Utah's gorgeous landscapes or hunkering down in a blanket to play video games or read a good book.

Rockhounding in Southern Utah: What do you need to know?

Small, medium quakes common in Southern Utah; but what about the ‘big one?’

Should Utah school employees under criminal investigation be put on administrative leave?