ST. GEORGE — A T-bone collision involving two vehicles Wednesday afternoon led to both drivers heading to the hospital and, for a time, a missing canine.

When police, firefighters and paramedics arrived on scene, they found a heavily damaged 2022 Ford Maverick pickup and the crumpled remains of a street-legal 2017 Polaris RZR side-by-side.

Mitchell said it was determined that a 76-year-old woman driving the blue Ford had attempted a left turn in front of westbound traffic before being struck on the passenger side by a 61-year-old man driving the black Polaris utility task vehicle.

The male driver sustained a major head injury and possibly broke a leg, while the female driver reported neck pains that led to both receiving transport to the hospital by Gold Cross Ambulance.

“Something interesting is that the UTV had a dog in it, but no one knows where the dog is,” Mitchell said. “There was a report that a bystander took the dog to the vet, but it’s unknown which vet.”

It just so happened that a group of Good Samaritans that included Jim and Chrysa Holdaway saw the aftermath of the crash and rushed to help man and animal alike.

“We were driving east on Mall Drive when we heard a big crash ahead of us,” Jim Holdaway said. “I looked and saw the RZR in the air spinning around, maybe two or three times. I never saw it go inverted, but it definitely spun a couple times and landed down on its wheels which were just destroyed. And then the woman’s car kind of spun around and ended up in the position that you see.”

Parking their own car a short distance away, the Holdaways first checked on the man in the black side-by-side – finding him unconscious with one leg poking through the plastic flooring at the base of his vehicle.

As the man started to regain consciousness, Jim Holdaway said his wife and another eyewitness that had arrived to help found a small, shell-shocked passenger in the side-by-side wreckage.

“There was a dog in the passenger side, and it had been in a seat before the impact threw it against the dashboard and the seat went flying out of the vehicle along with the windshield,” he said. “It couldn’t move: it was just shaking and trying to breathe.”

Chrysa Holdaway and the other helper, who identified himself as Cody, lifted the dog out of the UTV and carried it to Cody’s truck where he promised to take the animal to a veterinarian.

In the meantime, firefighters arrived to use the Jaws of Life tool to pry open the RZR’s door and free the male driver. The owner and police were not notified of the dog’s whereabouts, leading to some short-term confusion.

“The owner went to the hospital with lights and sirens, so he has no idea where the dog is,” Mitchell said. “We appreciate that someone took the dog to the vet, but we just want to know where it’s at so that animal control can get the dog back to the owner.”

Cody left Holdaway with a phone number that turned out to reach the Washington Family Vet Clinic. St. George News contacted the veterinary clinic and confirmed that they had received the dog, Sandy – a female mixed breed with a brindle coat.

Representatives with Washington Family Vet Clinic said that Sandy was in a stable condition but would be kept overnight for monitoring.

Mitchell said Sandy’s care and return would be coordinated with St. George Animal Services, which regularly assists police when pet owners are either injured, arrested or otherwise unable to care for animal companions for a short time.

Back at the scene of the crash, the female driver was cited for failing to yield on a left turn. The totaled vehicles blocked traffic along that stretch of Mall Drive, leaving just one lane of travel open for a short time until first responders cleared the scene at 3:08 p.m. 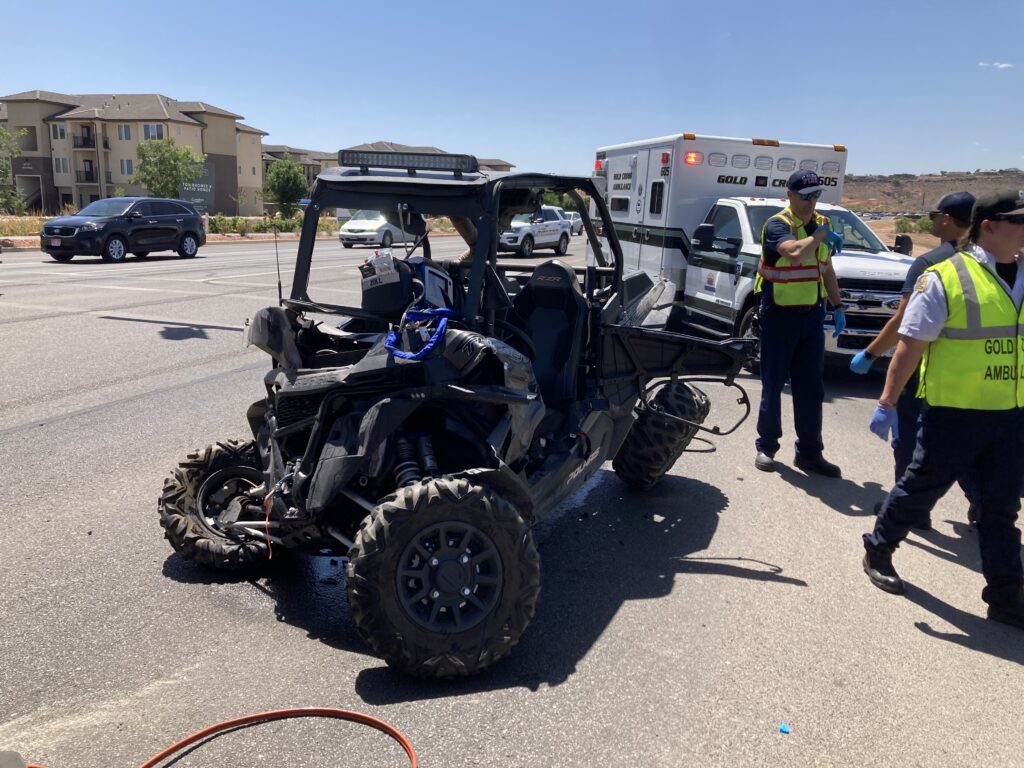 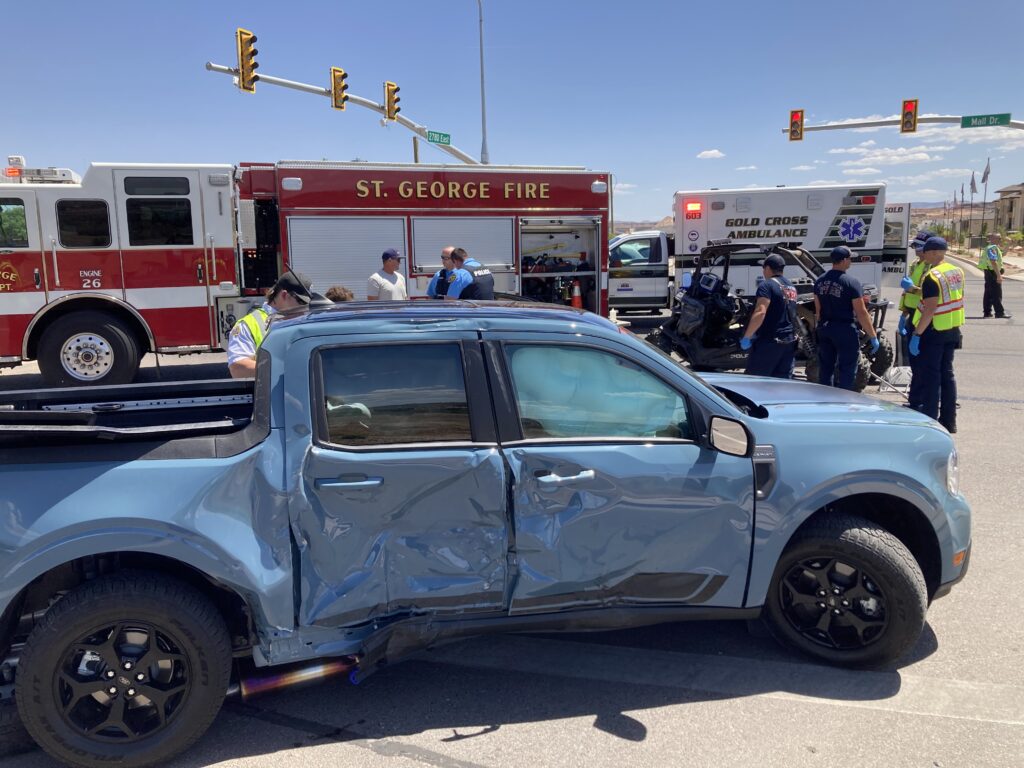 The view of a damaged 2022 Ford Maverick involved in a left-turn crash that injured both drivers and a canine passenger, St. George, Utah, May 18, 2022 | Photo courtesy of James Holdaway, St. George News 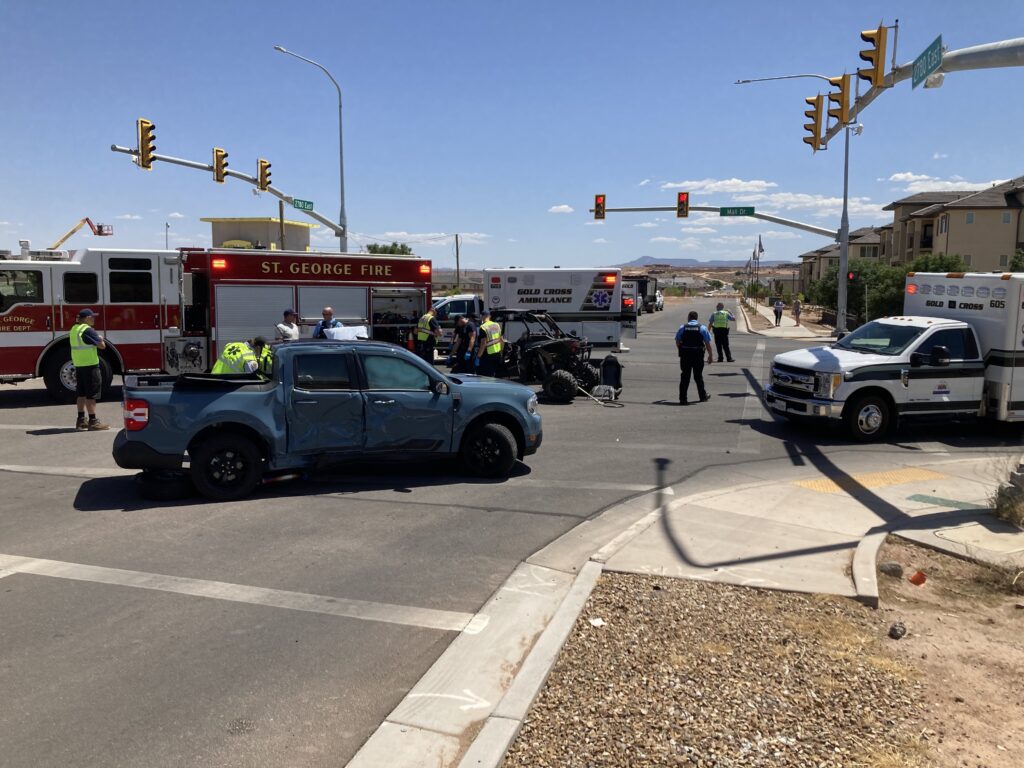 Canine is 'OK but shaken up' after van rear-ends K-9 sheriff's unit in gorge; 2 others injured