Speaking to Cedar City News at his home Monday evening, the 58-year-old Sharp recounted the events of the fateful series of events that transpired on the evening of March 14 at his daughter’s home in Enoch.

“It was eight weeks ago today, almost exactly to the minute,” Sharp said as he began.

“I was out in Enoch, helping my daughter remove a tree,” said Sharp, adding that he is an experienced tree cutter, having done line work for land surveyors.

Everything had gone perfectly up until the point the tree was just about to fall, said Sharp, noting that he had been standing on a ladder about five feet off the ground while making the final cut.

Sharp recalled he thought he needed a ladder to get out of the way of the tree, should it snap back as it fell.

“I felt like, ‘OK, I just need to get off this ladder to get away,’” he recalled. “I wasn’t even that high up on the ladder, you know, maybe only five or six rungs. But I thought I needed to get down just in case this thing snaps back to the ground.”

In that moment, Sharp said he forgot the important intermediary step of turning off the chainsaw, which was still running as he held it with his right hand.

“It was idling as I came down the ladder. I accidentally pulled the trigger and the throttle and drove it into my hand.”

Just as the sharp edges of the cutting chain fell onto the knuckles of Sharp’s left hand, he said he instinctively tried to throw the machine clear.

“It happened so fast, it’s hard to know, but I drove it into my hand, and then as I was throwing the saw off to just get it away from me, it cut my arm,” he said.

The saw tore into the flesh of Sharp’s upper left arm, a few inches above the elbow, slicing through muscles, veins, nerves and tendons but barely missing the main artery. It also didn’t reach the bone, he added.

What happened after that was what Sharp and his wife Mary Ann Sharp described as a series of miracles that was instrumental in his survival and subsequent recovery.

Sharp said his niece Rene Mardis, a nurse who lives across the street from where the accident occurred, had walked over to see how things were going and had witnessed the incident.

“My niece had just barely walked across the street right before this happened,” Sharp said. “My daughter was in the truck with a rope tied around the tree, so she didn’t know what had happened. My niece had to yell at her to come over.”

Together, Mardis and Sharp’s daughter Erin Banz worked quickly to prepare a tourniquet ready to apply to Sharp’s upper arm.

“My daughter ran and grabbed a belt,” he said. “So I kind of did a little tourniquet on the top of my arm. I pulled as tight as I could while they held direct pressure on the wound. It was still bleeding pretty bad.”

Meanwhile, Sharp said his daughter tried to call 911 multiple times on her cell phone without success.

“For whatever reason, her house is kind of in a dead zone for Verizon, and the call failed four or five times,” he said.

Sharp said his daughter then tried to call her husband Zac Banz, a Cedar City Police officer who had just gone into Cedar City to start his scheduled work shift a short time earlier.

“She finally was able to call my son-in-law, her husband, just enough … all he heard on his end was ‘artery’ and the call failed again,” he said. “And so he knew that I was in trouble.”

Sharp said at the time of that call, his son-in-law happened to be at the scene of a traffic collision in Cedar City, to which an ambulance had responded.

“The people that were in the accident didn’t need medical care, so as soon as he heard ‘artery,’ he gave the call over to the other officers that were there,” said Sharp, adding that Officer Banz then activated the emergency lights and sirens on his patrol vehicle and quickly responded back to his own address in Enoch with the Gold Cross Ambulance and its crew following right behind.

“He came out and brought the ambulance with him, which saved precious minutes,” Sharp noted. “I had emergency care within minutes.”

Zac Banz and another responder then replaced the belt on Sharp’s arm with two tourniquets, one above the other.

“They saw that the bleeding was at least under control,” said Sharp, who noted that he remained calm throughout the entire ordeal and still remembers almost every detail vividly.

Sharp was initially transported by ambulance to Cedar City Hospital’s emergency room, but doctors there quickly determined that he needed to be taken to St. George Regional Hospital.

“The doctors took a look at it and said, ‘This is deep enough and bad enough, he needs a vascular surgeon to be able to put this all back together,’” Sharp recalled. “So they decided to leave the tourniquets on and transport me to St. George.”

The ambulance ride down to St. George seemed to take quite a while, Sharp recalled.

“I remember the ride. I remember thinking that I should have been there by now, and looking out the back windows and seeing that we were only at Black Ridge,” he said. “I went, ‘Oh, this is a long ride.’”

Sharp said that he wasn’t in very much pain at that point.

“I’d severed so many nerves that there was really no pain there (in my arm),” he said.

He was, however, starting to wonder about not having any blood flowing into his lower arm and hand.

“I was kind of nervous, as the tourniquet had been on for a long time,” he said. “But they didn’t seem too terribly concerned about it.”

Shortly after he and his wife arrived at the hospital in St. George, Sharp said they were met by Dr. Aaron Klomp, a highly experienced plastic surgeon who just happened to be on call that night.

“He said that he had just enough muscle tissue, just barely a few fibers to start with, and was able to reconstruct everything,” Sharp recalled. “He told me that he felt comfortable that he got all the major nerves reconnected and everything put back together, except for one. He says I wasn’t sure where it went to, but we’ll worry about that later if we have to.”

“Anyway, three hours later, I came out of the anesthesia just fine and we were on our way home,” Sharp said. “We probably got home at around 3:30 in the morning.”

Sharp said his recuperation and rehabilitation over the past several weeks have gone remarkably well and at an accelerated pace.

“I not only beat the odds, but they’re almost having to rewrite the protocol for these kinds of accidents,” he said, adding that he believes the hyperbaric equipment that he and his wife purchased for their home about a month before the accident has also helped boost his recovery.

“I think the hyperbaric chamber has definitely helped and sped things up a bit,” he said, adding that his occupational therapist has been amazed by his progress.

“Yeah, he’s just like, ‘This isn’t standard. You shouldn’t be healing this fast and doing so well,’” Sharp said. “He just can’t believe it.”

Sharp said he attributes his recovery to both the miracles of modern medicine and to the many prayers and expressions of faith that were offered on his behalf.

Sharp said that while he was still in Cedar City Hospital awaiting transport to St. George, he received a priesthood blessing from a close friend.

“He mentioned that I would regain full use of my arm and recover fully,” Sharp recalled. “It just gave me hope.

“And, I felt angels and people on the other side really watching out and protecting me. o I think that has a lot to do with it.”

In mid-April, exactly one month after the accident, Sharp was able to take the stage with a few of his fellow bagpipers and perform with The Piano Guys during their three-night concert series at Tuacahn Amphitheater in Ivins. That same week, he was able to lead the music again, using both arms, during his local church congregation’s worship services.

Sharp said he also was able to go right back to work at his job as education director at Havenwood Academy within a few days of the accident; he previously retired after a 30-year career in public education, including 11 years as an assistant principal at Cedar High School.

As she went through her list of miracles associated with her husband’s accident and recovery, Mary Ann Sharp pointed out that another remarkable thing that happened was that Scott hadn’t taken the correct dosage of his blood thinner medication in the days leading up to the accident, thereby causing his blood to be thicker than it would have been otherwise.

“My niece and my daughter both thought he was going to bleed out because he was bleeding profusely,” Mary Ann Sharp said.

In addition, Scott Sharp had lost so much blood that doctors anticipated that he’d need a transfusion, she said, adding that the medical staff had multiple units lined up and ready to go at the hospital.

However, once the surgery was over, Sharp said the doctors checked his blood and INR coagulation levels and found them to be acceptable, so a blood transfusion wasn’t necessary.

On Monday of this week, earlier in the same day as his interview with Cedar City News, Sharp played his bagpipes at the graveside following a funeral service in Parowan. It was on their way home from that event that he decided to share his story publicly, he said.

As far as lessons to be learned, Sharp said he’s worked past his initial embarrassment and just wants to remind people to be more careful.

“My message is, you know, obviously, accidents can happen quickly,” he said. “And even as much experience as I had with chainsaws, I mean, they can just get away from you.”

“So, I now have full protective gear from head to toe,” he said. “I probably couldn’t cut myself if I tried. My daughter actually purchased most of that for us.”

“You can’t be too careful when it comes to working with dangerous equipment,” he added.

In recent weeks, Sharp said he’s had a few people already tell him they thought about his accident when considering doing their own chainsaw work; they either purchased some protective gear or hired a professional to do the job.

Above all, Sharp and his wife both said they are grateful for the outpouring of love they’ve received and support from friends, family members and people in the community.

“It’s just an amazing chain of events,” he said. “The stars were aligned. Faith and prayers work. Miracles happen. Whatever you want to call it. I’m in good health and have full use of my arm.” 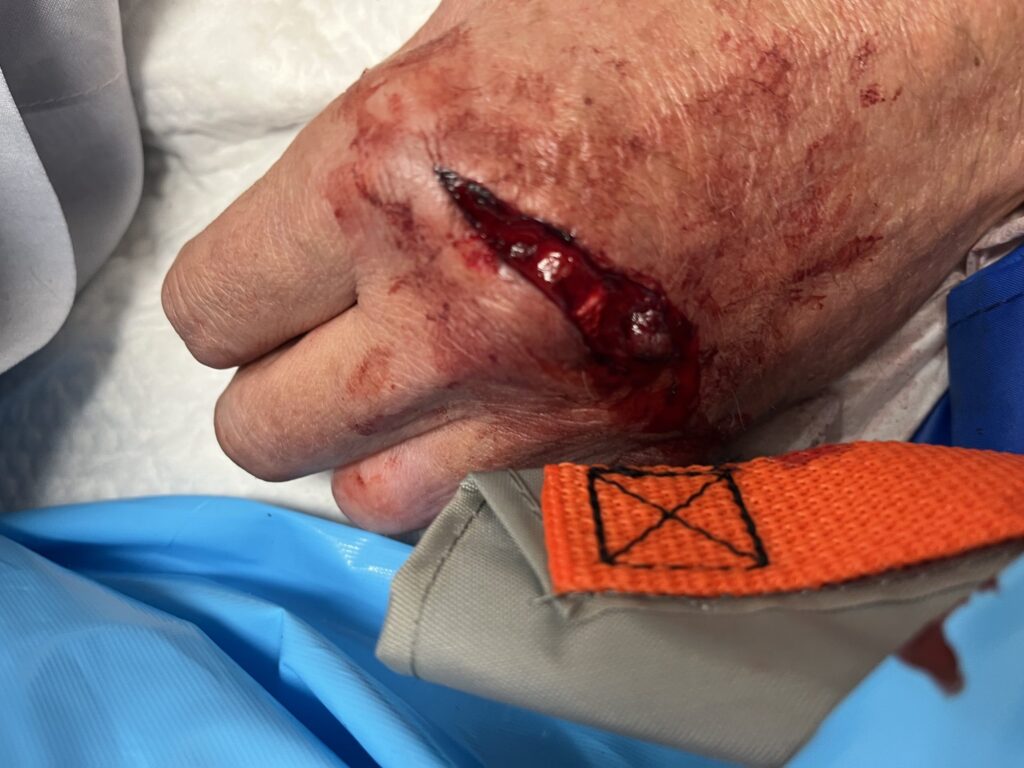 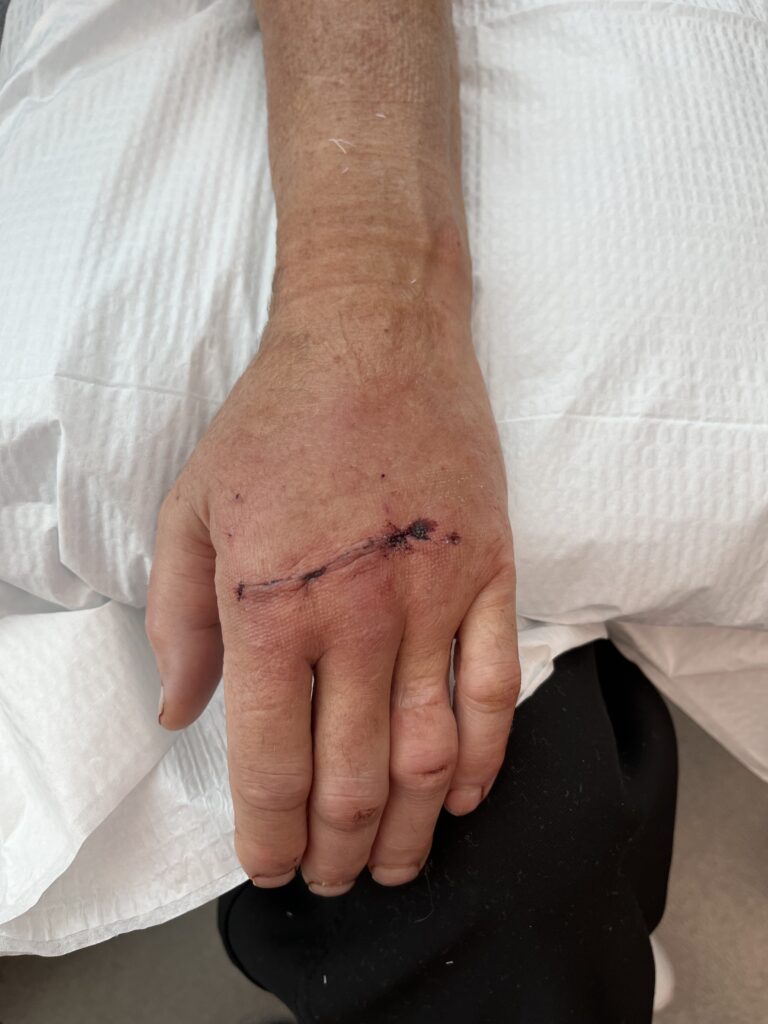 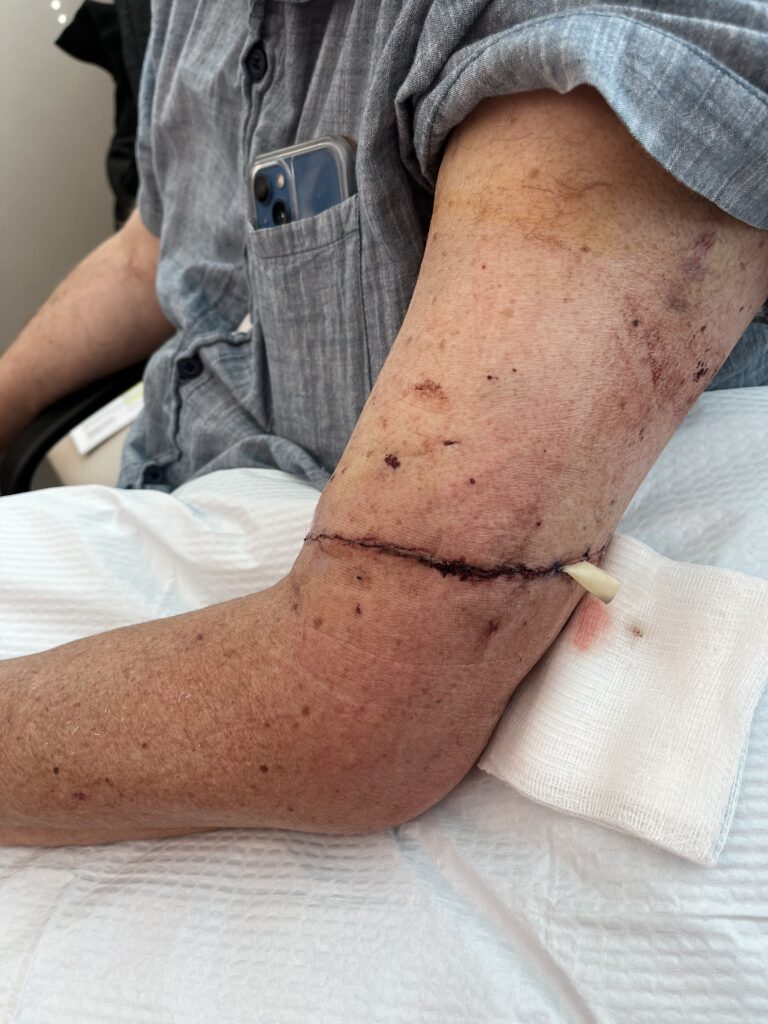 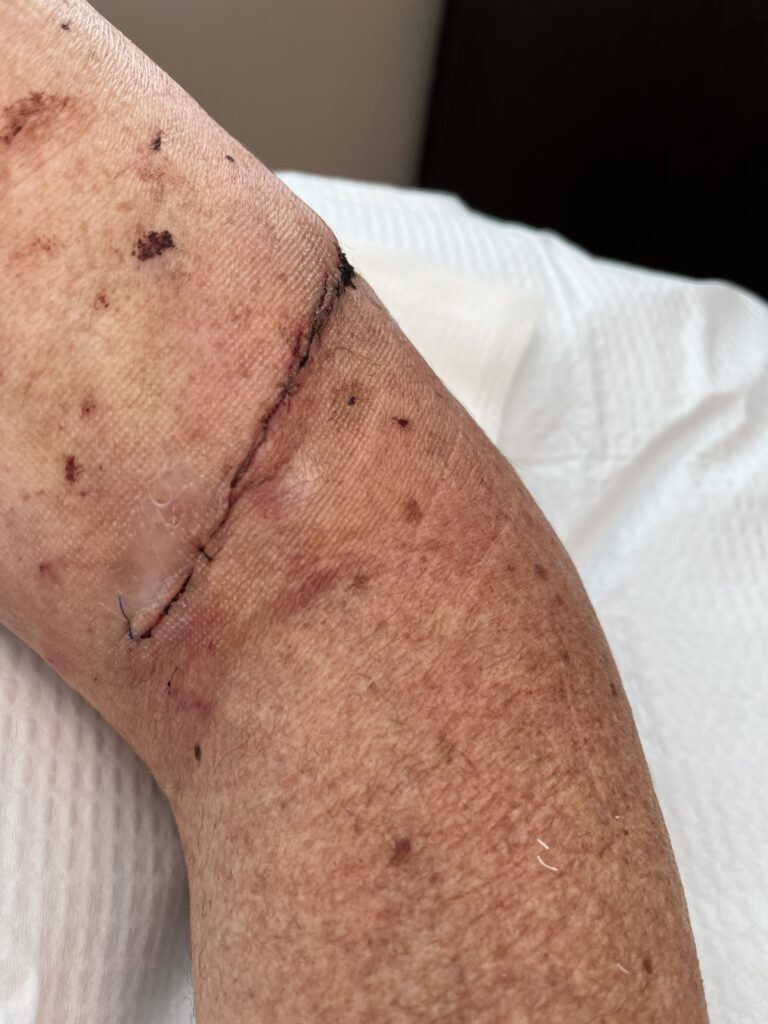 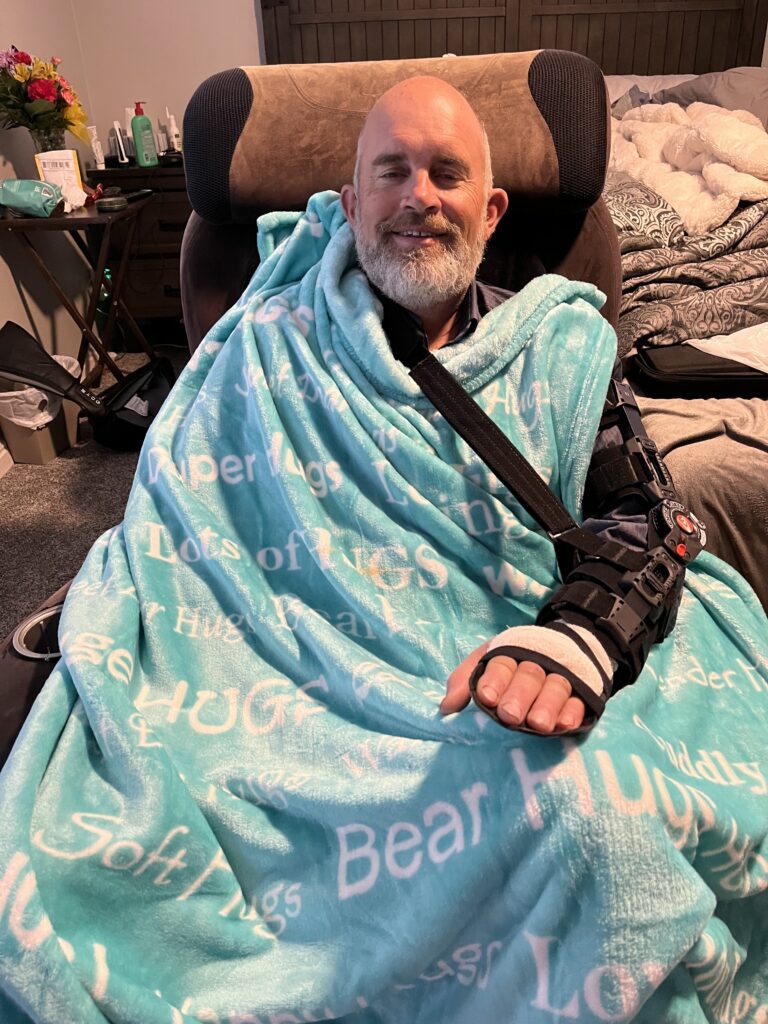 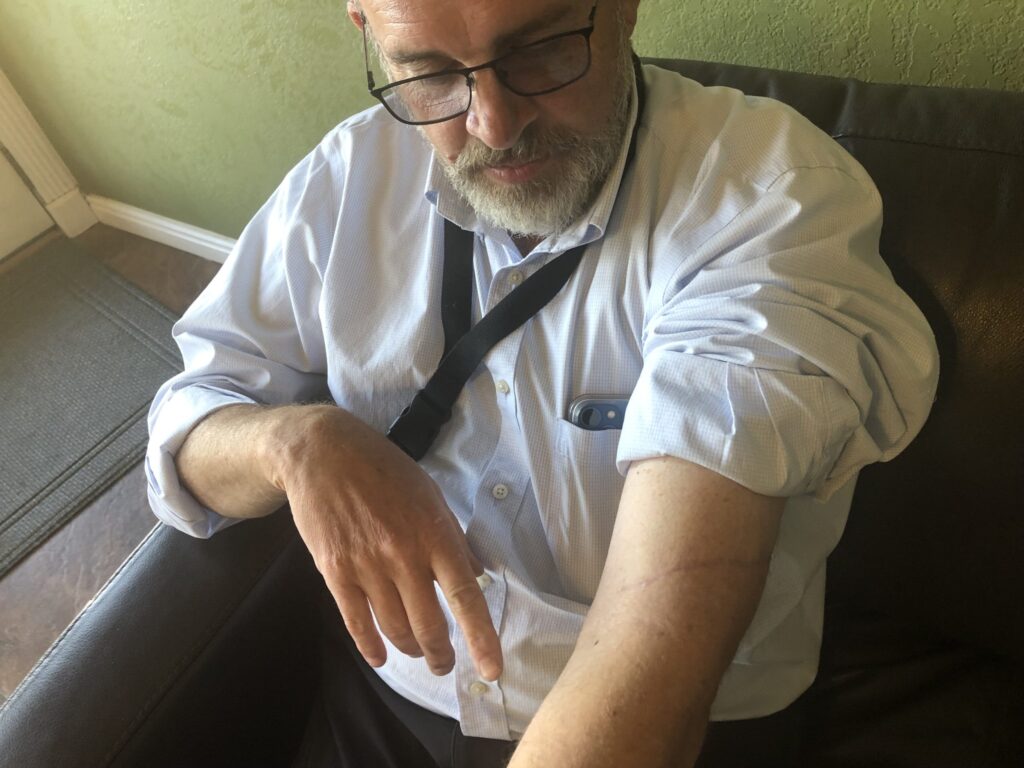 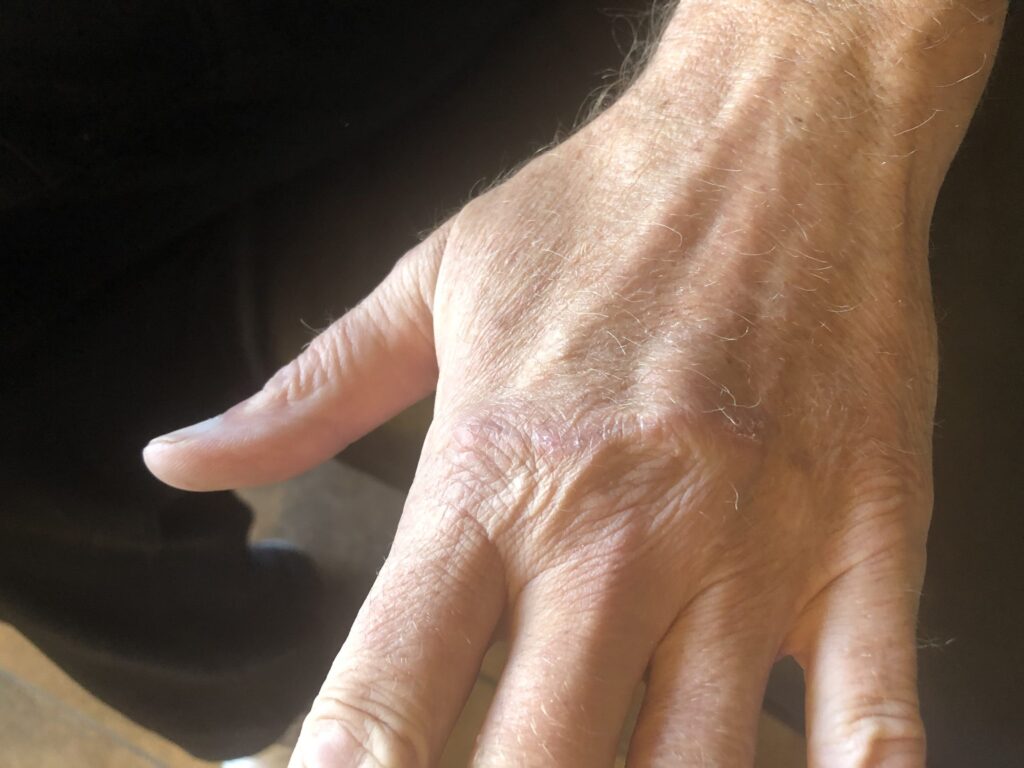 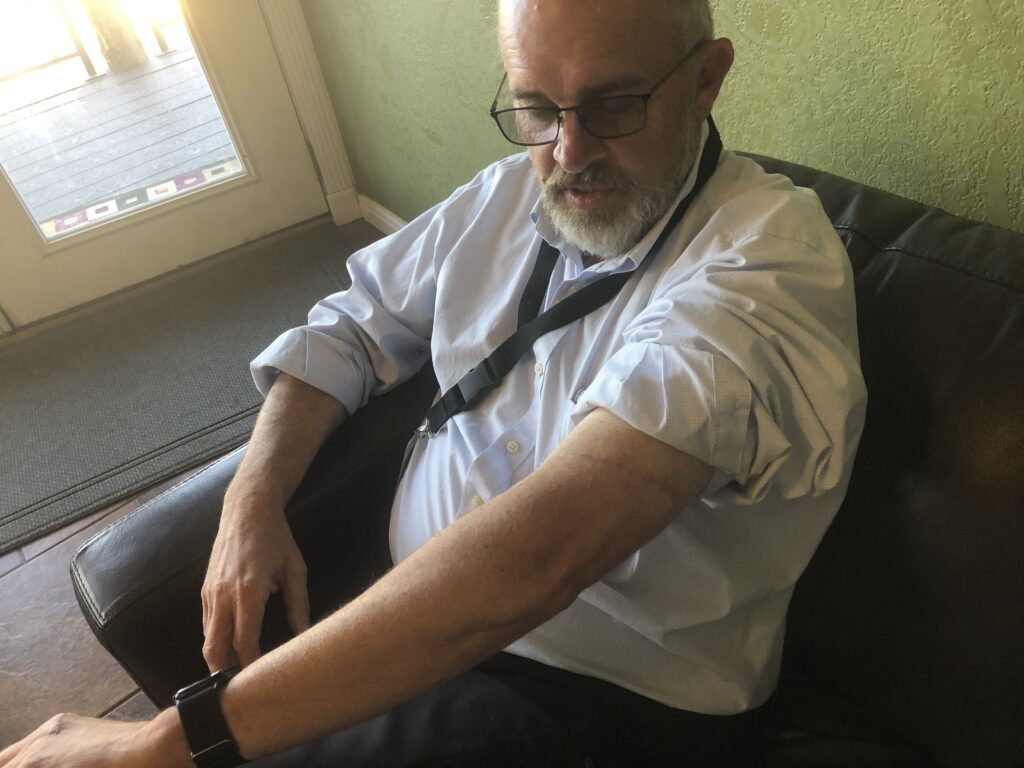 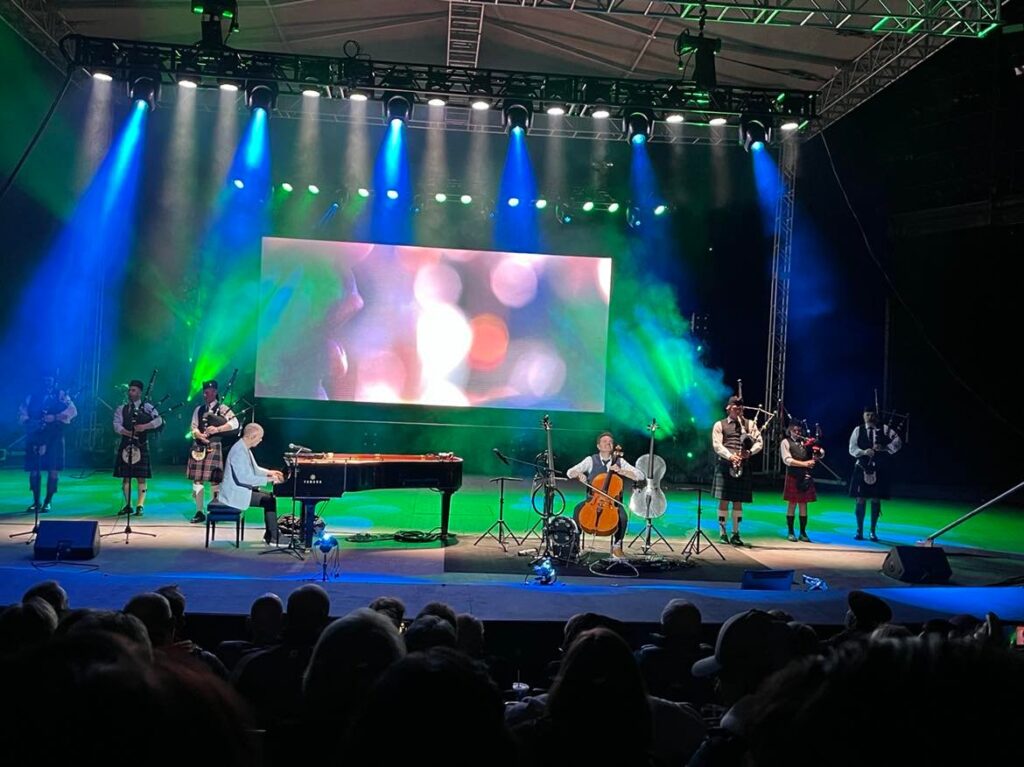 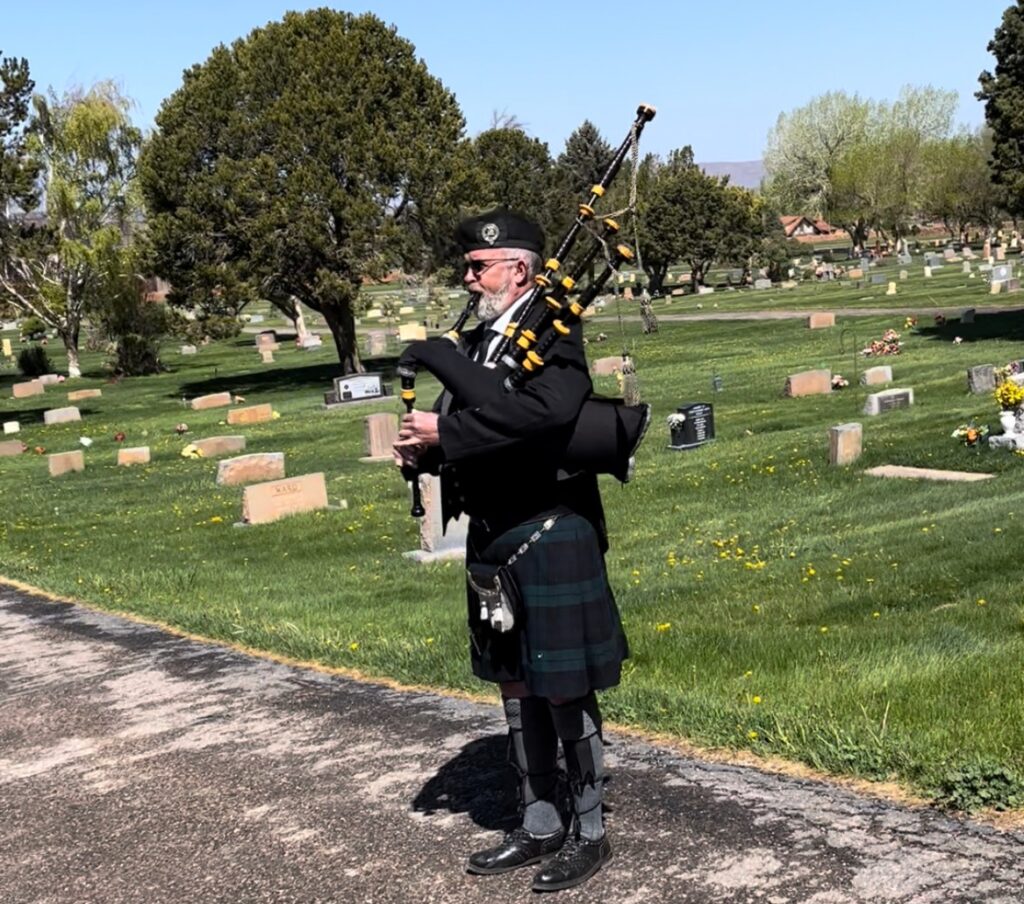 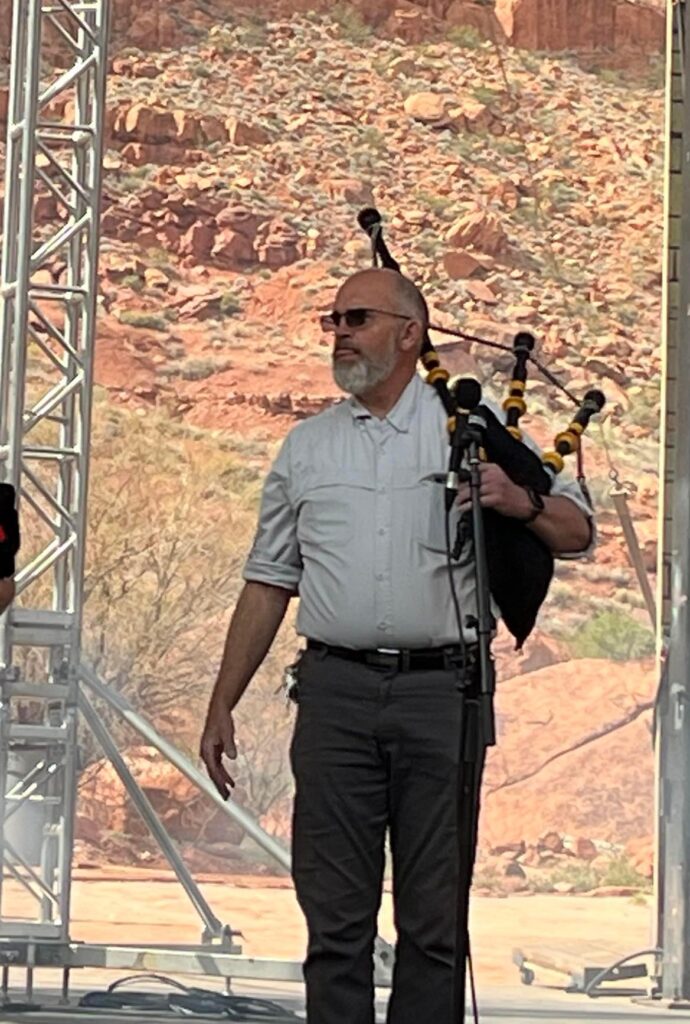 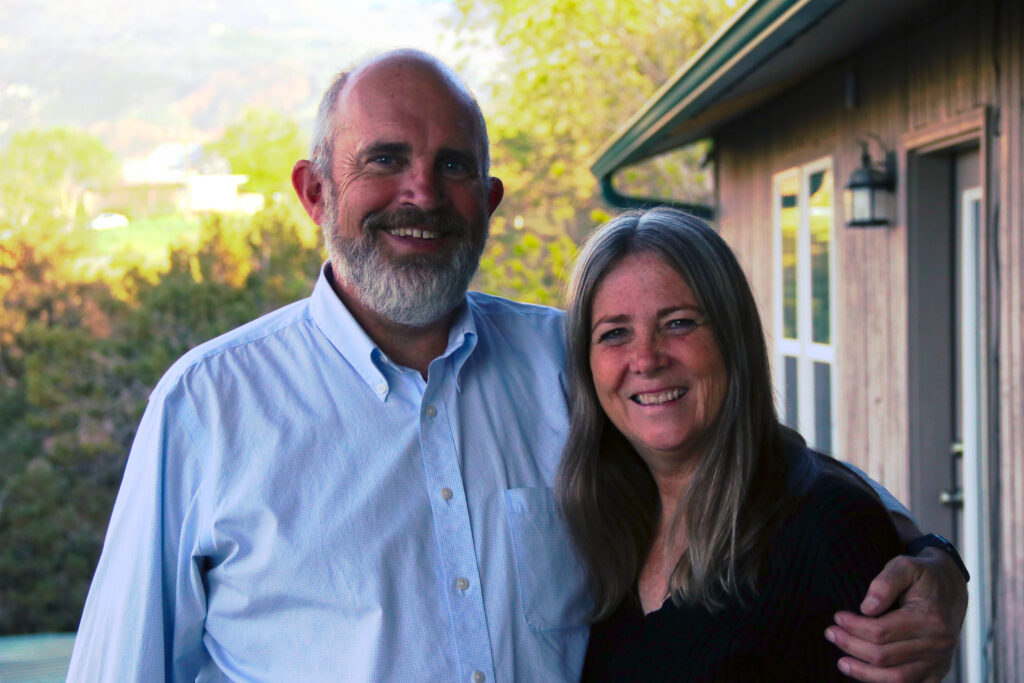 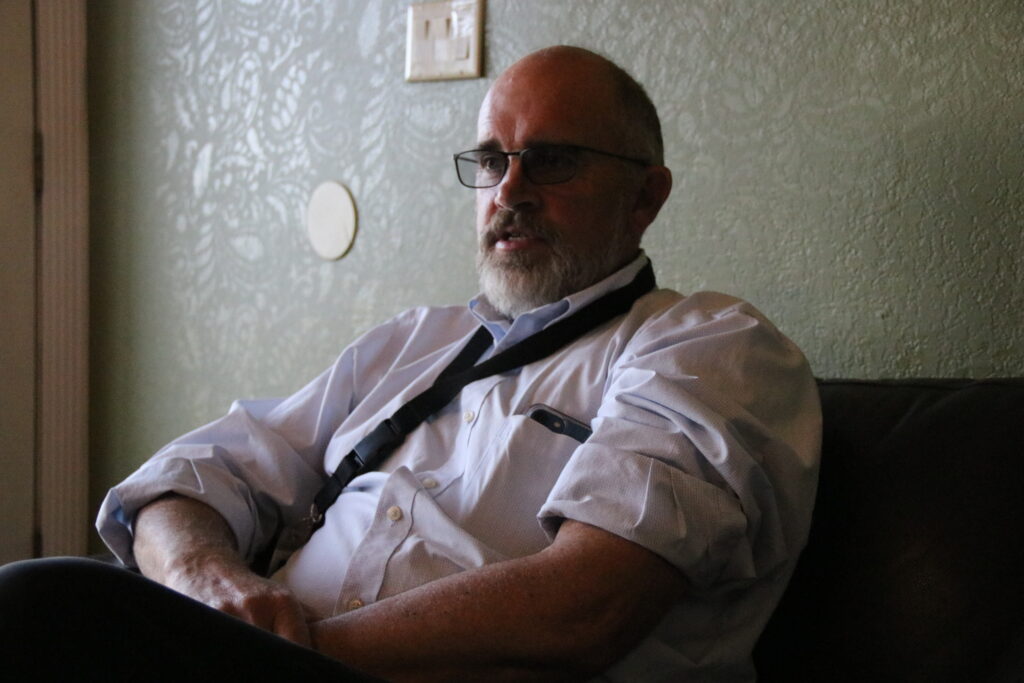