ST. GEORGE — Motorists traveling along Interstate 15 frontage roads near Red Cliffs Mall on Tuesday afternoon had to navigate around two crashes separated by just a few hundred feet and 30 minutes of time.

St. George police and paramedics with Gold Cross Ambulance were called to the first incident at 3:30 p.m., arriving at the intersection of Red Cliffs Drive and Mall Drive to find a silver Honda Civic immobilized in the center of the roadway.

Officer Eric Trombley said the Civic was struck in a T-bone fashion after its driver, an adult woman in her late teens or early 20s, had attempted a left turn when the traffic signal changed to yellow.

“She noticed a couple other cars stopping for that yellow light; however, a white passenger car (Kia Optima) that was going east continued through the intersection,” Trombley said. “She thought it was going to stop, made her left-hand turn and they collided in the intersection.”

The driver of the second car, another adult woman of similar age, was able to move her Optima out of the intersection and park it a short distance away in the mall lot. Both women were uninjured, and the paramedics were dismissed shortly before a tow truck arrived to clear the Civic.

Trombley said the Civic driver was cited for failing to yield on the left turn, adding that crashes like this have become more and more common in recent years.

“Even though vehicles were stopping for her, she still has to make sure that intersection is completely clear before making that turn,” he said. “Especially on yellow lights, people think that they have to clear that intersection no matter what. But if you’re in an intersection and that light changes to red, other people have to wait for you to clear. You don’t have to hurry up: just make sure it’s safe to go ahead and then turn.”

But before the first scene was cleared, police and other first responders were called to a second crash just a block away at the intersection of Red Hills Parkway and Gateway Drive.

The similarities between the two crashes were immediately apparent. Officer Tiffany Mitchell said another driver traveling west – this time an 80-year-old man in a white Nissan Maxima – attempted a left-hand turn in front of eastbound traffic before being struck on the passenger side by an oncoming vehicle he had failed to notice.

“The driver stated they were turning left to enter Gateway (Drive) and did not see Vehicle 2 (a red Toyota 4Runner) hidden behind another vehicle,” Mitchell said. “The driver of the first vehicle was cited for failing to yield on the left turn, and a passenger in his vehicle was transported to St. George Regional with some neck pain.”

Details on the severity of the passenger’s injuries were not available at the time of reporting, though Mitchell said it was likely as a precaution due to his age. Besides the 69-year-old man taken to the hospital, the driver of the Maxima and the two occupants in the 4Runner, a male driver, 18, and his female passenger, 18, were uninjured.

Both vehicles had to be towed from the scene, which caused moderate disruptions to traffic as vehicles funneled beneath the I-15 overpass tried to steer clear of the wreckage.

As police, tow truck operators and a team member with UDOT Incident Management worked to open the roadway, a secondary collision occurred between a FedEx truck and a passenger vehicle, though it only involved minor cosmetic damage to the passenger vehicle’s exterior.

Both scenes were cleared by 4:30 p.m., and traffic resumed as usual on both frontage roads as well as the underpass, Gateway Drive.

In anticipation of a busy weekend fueled by Ironman participants and spectators, Mitchell said all drivers should practice extra caution in the coming days and set aside more time for travel to prevent accidental harm.

“We have 3,000-plus athletes arriving here, more and more every day, to get ready and trained,” she said. “So we have more runners and cyclists out on the road than we normally do, plus we have more visitors, which makes traffic heavier. So you have to just plan ahead, leave earlier and give yourself enough time so that you don’t feel rushed to get to where you’re going.” 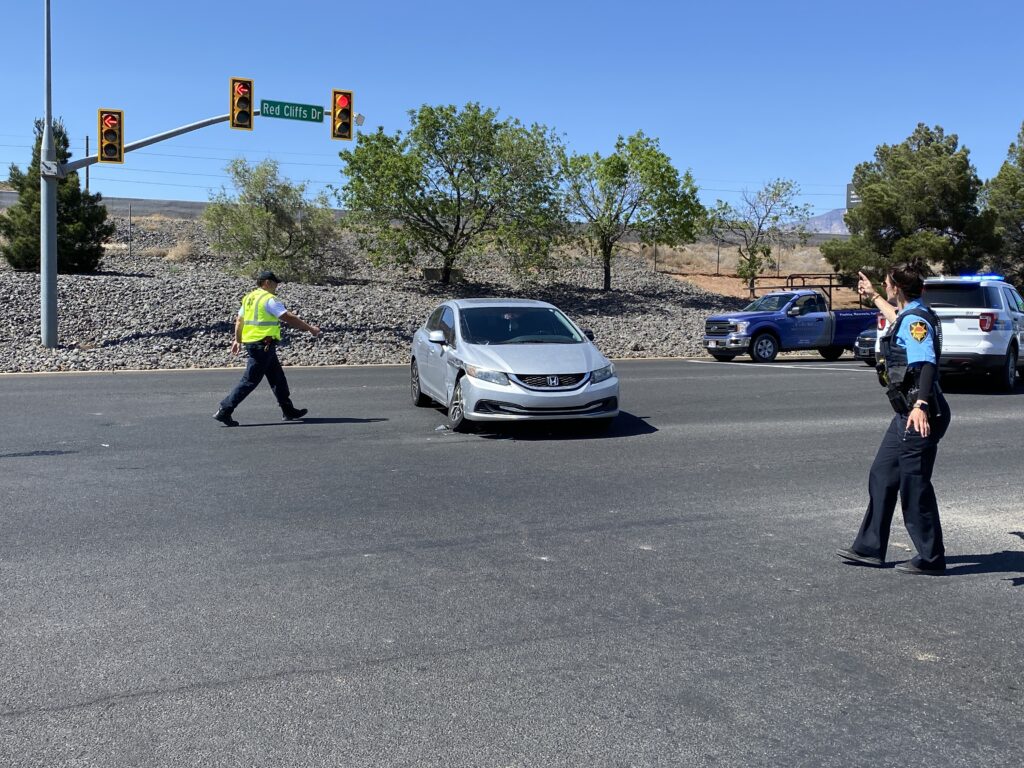 The driver of this silver Honda Civic was cited by St. George Police for failing to yield while attempting to turn left from Red Cliffs Drive onto Mall Drive, St. George, Utah, May 3, 2022 | Photo by Ammon Teare, St. George News 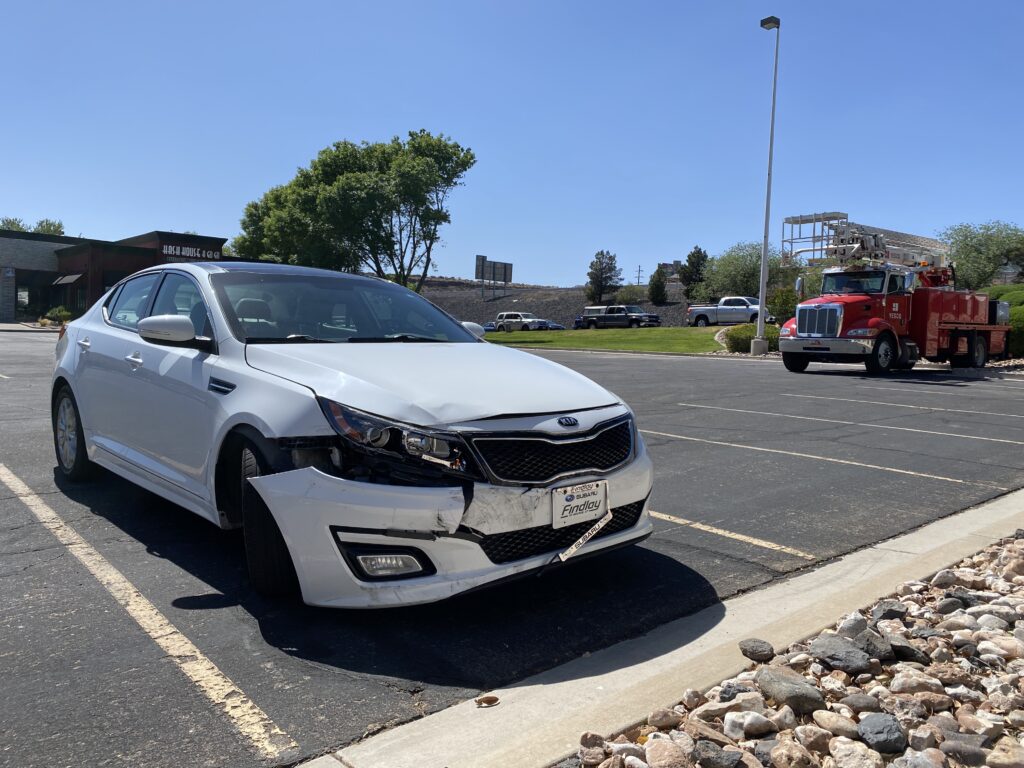 After colliding with the Honda Civic attempting to turn left, the driver of this white Kia Optima escaped injury and was able to drive the car into a nearby parking lot to wait for first responders, St. George, Utah, May 3, 2022 | Photo by Ammon Teare, St. George News 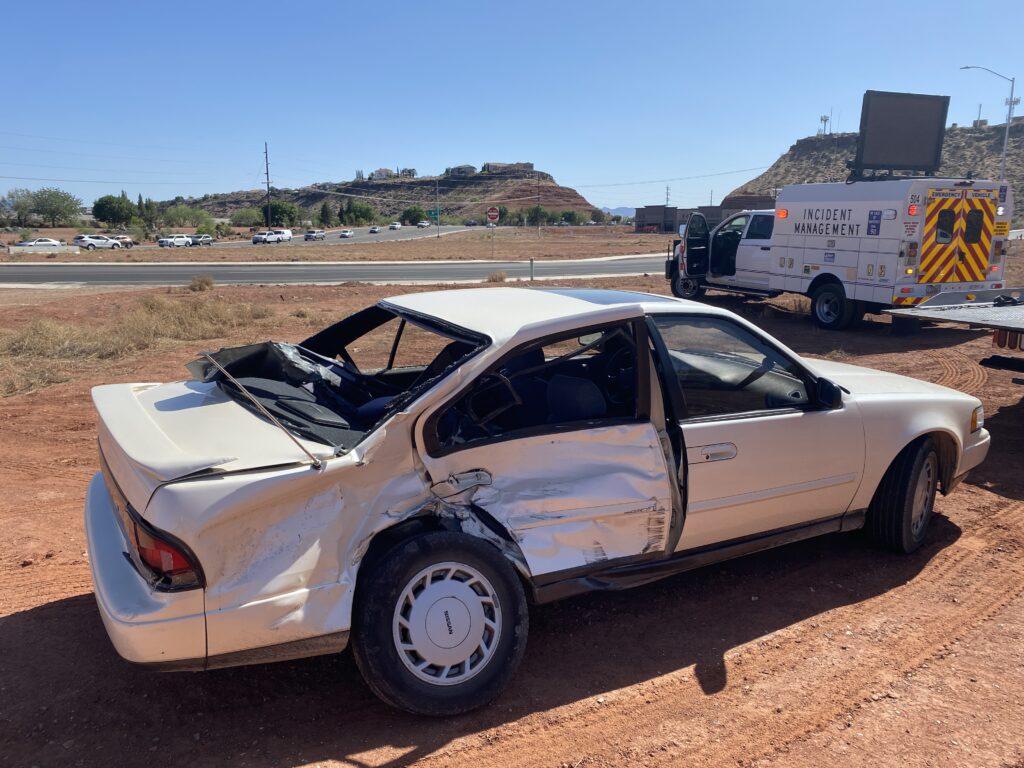 A 69-year-old man traveling as a passenger in this 1989 Nissan Maxima was taken to the hospital in the aftermath of a T-bone collision reportedly caused by the Maxima driver, St. George, Utah, May 3, 2022 | Photo by Ammon Teare, St. George News 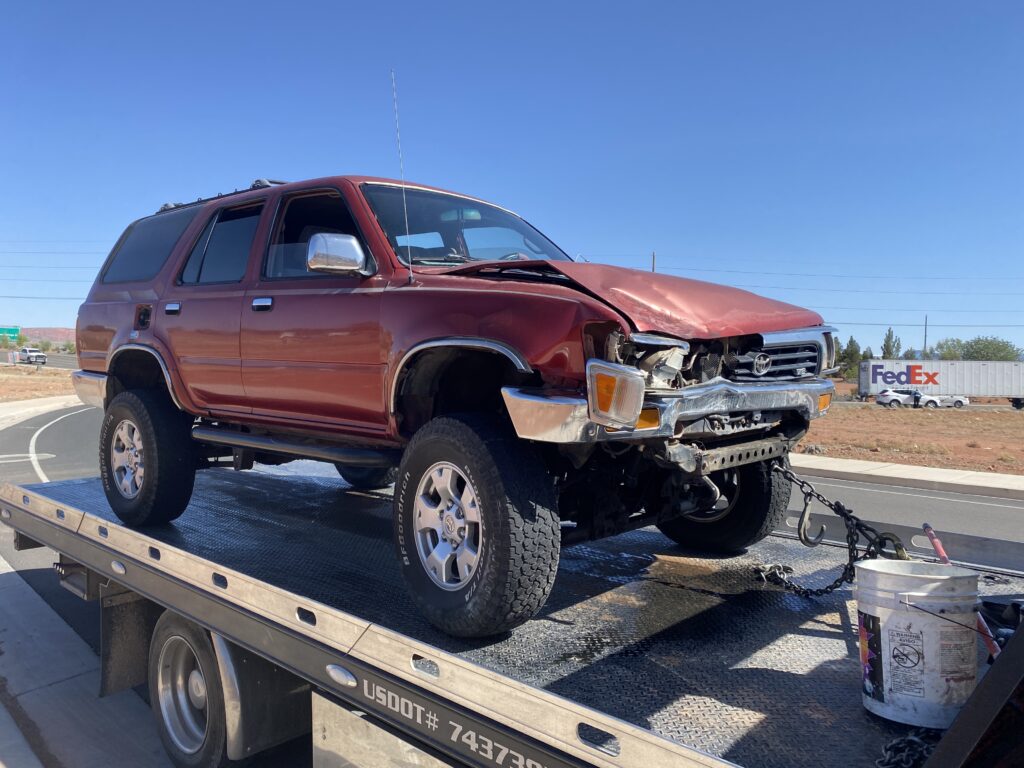 An 18-year-old man driving this 1994 Toyota 4Runner was accompanied by an 18-year-old female passenger when they collided with a Nissan Maxima that turned out in front of them, St. George, Utah, May 3, 2022 | Photo by Ammon Teare, St. George News

‘I don’t know how he got out,’ woman says following rollover on Red Cliffs Drive in St. George