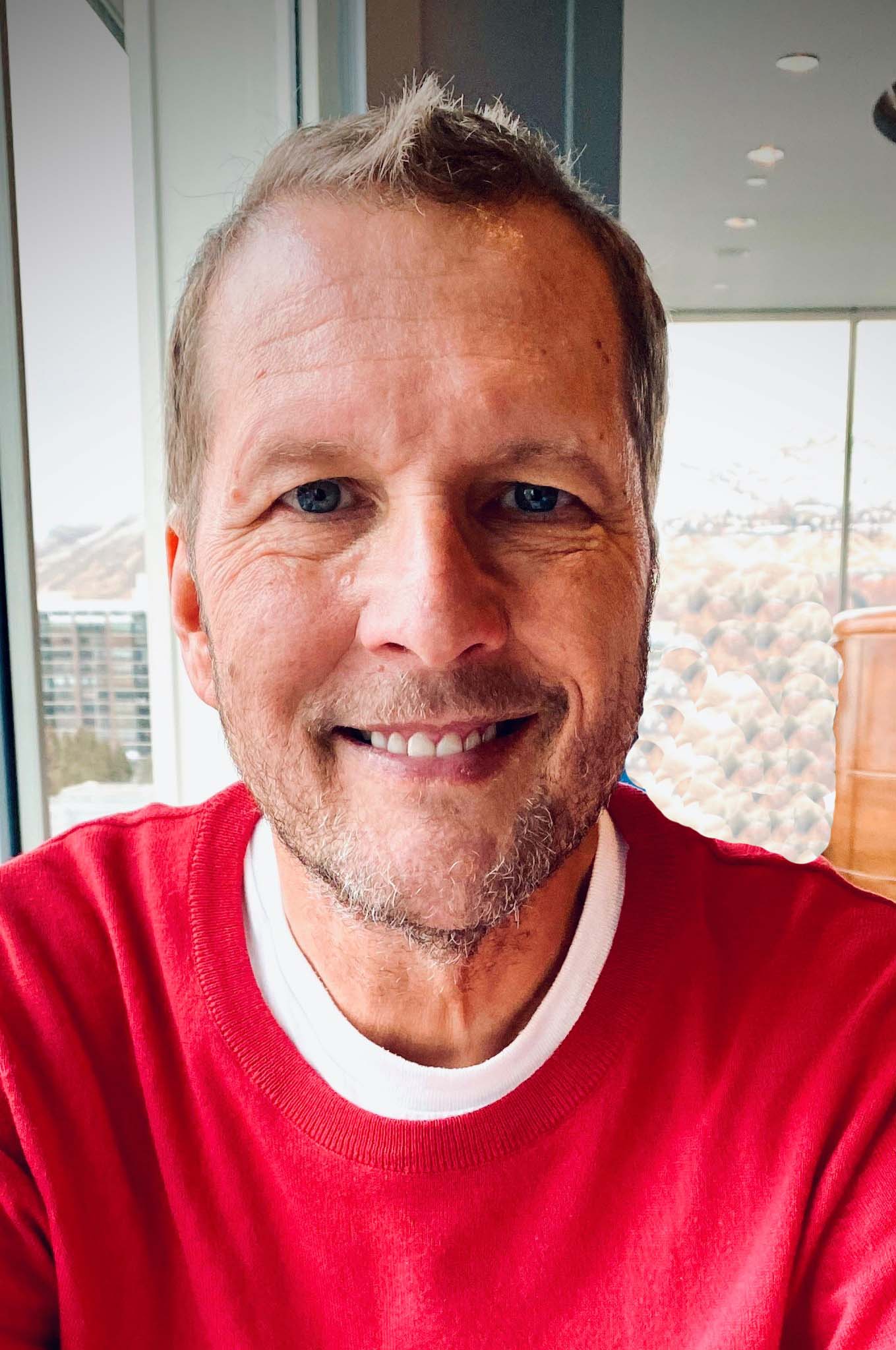 Mark Allen Lewis, husband, father, grandfather, uncle and beloved friend, passed away on Nov. 18, 2021, from sudden cardiac arrest at the age of 62.

Mark was born on May 29, 1959, the first child to Robert and Billie Lewis, in Ashland, Kansas. During his childhood to young adult years, Mark moved frequently and some of his homes included living in Kansas, California, Colorado, Guam, and the Seychelles Islands. In 1966, Mark became a big brother to his sister, Shari Lewis.

Throughout his life, Mark greatly enjoyed both playing and watching sports. He was described by the cousins he grew up with as being incredibly silly, smart and the absolute best friend. Mark had a great love of Disney, even from a young age. He was very skilled at tennis and was on the tennis team at Piedmont Hill High School in San Jose, California. Mark also enjoyed music and was a trumpet player while in school. He always had a love of animals, particularly dogs, and was grateful for the dogs he had growing up and throughout his life.

Shortly after graduating from Piedmont Hill High School in 1977, Mark was baptized and became a member of The Church of Jesus Christ of Latter-day Saints. Mark studied briefly at Rick’s College (now BYU Idaho) and in February 1980, he was called to serve a two-year mission for the Church of Jesus Christ of Latter-day Saints in Germany. Mark loved the German language and culture and spoke of it often. He then went on to study Accounting at Brigham Young University in Provo, Utah, from which he graduated in 1986.

Following his graduation from BYU, Mark met his first wife, Cindy, while attending the Denver Singles Ward. They were sealed for time and all eternity on June 27, 1987, in the Denver Temple. As a couple, Mark and Cindy often attended theater shows and traveled with one another. They shared a deep love of the arts and of other cultures. Mark supported Cindy as she participated in various dance and musical theater productions, which he would always attend. Together, they shared a deep love of Hawaiian culture and music.

They were able to go on many trips to Hawaii, both as a couple, as a family, and with friends. While at home together, they enjoyed watching TV shows and movies. One of their favorite shows was the Amazing Race, and Mark was convinced that they could easily win with their combined linguistic abilities. Mark and Cindy moved around Colorado together, eventually settling in Fort Collins. In their time there, they made many friends and touched so many lives.

Mark spent several years working as an Assistant Controller and Business Analyst. While working and supporting his family, Mark completed an MBA program in information systems at Regis University. He began working for Oracle Corporation in 1996 as a Consulting Project Director and dedicated 25 years to the company. As part of his job, Mark was required to travel to various places for projects that lasted anywhere from a few months to several years. These projects were located both within the United States and abroad. Some of the locations he worked included Wyoming, New York, Washington D.C., California, Washington, Canada, the United Kingdom, Brazil, and Japan.

Mark welcomed his first child, Danielle, into the world on Sept. 13, 1990. He thrived as a father and cherished the opportunity to take family trips to Disney World, Hawaii, and Europe. During Disney World vacations, Mark was the designated planner and runner for Fast Passes. He enjoyed family vacations so much that during these trips, he would start planning the next year’s trip. Having to work out of town during the week, Mark made any time with family a priority.

On several occasions, he was able to have his family join him on business trips. During a project in London, Cindy was able to join him for a week and on another project in Brazil, Cindy and Danielle were both able to join him and spend time with him. He became an excellent tour guide of the places that he came to know so well. As a family, they frequently spent time in Grand Lake, Colorado where they enjoyed boating and relaxing. He loved making people laugh, especially his daughter. During his church mission, Mark learned to cook a German pancake (Eierkuchen), which he declared one of his specialties.

On holidays, he would make this dish for his family, using food coloring to match the occasion, much to his daughter’s delight. Mark was a devoted husband and loving father who always put the needs of his family first. After Mark supported her through a long battle with breast cancer, Cindy passed away on Jan. 15, 2015.

Mark met his second wife, Cami, in October 2015. They were sealed for time and all eternity in the Oquirrh Mountain Temple in South Jordan, Utah on March 9, 2016. Mark and Cami moved to southern Utah in 2018. Together, they greatly enjoyed traveling and exploring places with one another. Cami was able to join Mark on several of his work trips, which allowed them to spend time together even while Mark was on a project.

While at home in Southern Utah, Mark and Cami often attended Tuacahn shows together and made it a point to purchase and use season passes, as this one one of their favorite things to do. They made spending time outdoors together a priority and frequently went on hikes and rode their bikes together to explore their new home. They recently purchased e-bikes and spent many hours riding them together. Mark and Cami enjoyed the beauty of southern Utah so much that when their home was being built, having a view of the red landscape was a must.

As a couple and with their family, Mark and Cami often took vacations together. Mark loved spending time at the beach, and he was so grateful to have found someone who equally enjoyed the same thing. Living so close to Las Vegas, Mark and Cami were able to attend multiple concerts and shows together, which is something that they found great joy in.

Through their marriage, Mark gained five more children and their significant others along with grandchildren who he adored and who adored him in return. It was important for Mark to have a close relationship with his family, and he greatly enjoyed time spent with his loved ones. During a recent family trip in June 2021 to Hawaii with his family, many cherished memories were made. Mark was so happy to have the opportunity to watch his family grow closer together and see family bonds strengthened. Mark was so grateful to see his daughter and bonus children become a family that loves and accepts each other and enjoys spending time with one another.

Mark found any excuse to play golf and spent many hours on the golf course with friends and with his father-in-law, Barry Arnold. Mark and Barry had regular tee times during the week and frequently had friendly competitions over who could beat the other’s score. He was a master on the grill and loved using the Traeger. Friends and family were frequently able to enjoy the many things he prepared with his Traeger.

Mark was an avid runner and loved having opportunities to run any type of marathon. He considered it a great success if he was able to convert anyone else to the running life. He was adventurous and always up for trying new things. On Mark’s 60th birthday, he had the opportunity to go skydiving. It was activities like this that Mark loved experiencing and being able to share the stories of later with family and friends. He lived an amazing life of serving and loving others. Mark was a valiant servant of the Lord and had many callings within the gospel.

He was dutiful and compassionate and had a huge impact on the lives of so many. He was a friend to everyone he met and he was quick to welcome others into his life. Throughout his life, no matter the length of time a person had with him, Mark made a great impression on so many people whose lives have been forever changed by knowing him. Mark will be greatly missed by his family and friends.

Mark was preceded in death by his parents, Robert and Billie; father-in law, John; first wife, Cindy; mother in-law, Carolyn; and grandson, Jaxon. He is survived by his wife, Cami; his children: Danielle, Carisa (Alex), Braden (Ashley), Morgan (Ryan), Breanne (Gavin), and Tyson (Bree); his sister, Shari; his nieces and nephew; his uncles; and his cousins. Mark has eight grandchildren (and one more on the way).