LAVERKIN — Stephen Bird used to have neighbors across the street – two houses with longtime residents and views of the surrounding area from the edge of the LaVerkin Bench.

The neighbors, their houses and even the land that once supported it all is gone – lost in a landslide that continues to eat away at the hill and threaten the future of the Overlook subdivision.

“When a person buys, like myself, we buy thinking that all the geological studies have been done in good faith,” Bird said. “Now, 15–16 years later for me, I may lose my home. If they (the city) don’t mitigate the sliding, then it’s kind of in jeopardy. I don’t know. I have a lot of worry.”

The first signs of trouble came in 2005, when the back patio of the home at 275 North 560 West started to shift and the ground beneath it gave way. The homeowner, Bob Harris, used horizontal and vertical stabilizing piers to shore up the ground beneath his home and stop the slide.

It was evident then that an abundance of groundwater was weakening the hillside along that stretch of 560 West, according to Harris’ statements and those of public works employees at a Nov. 2020 public meeting.

After apparently drying up, there were no more problems until March 2020 – shortly after city irrigation resumed for the year. Throughout 2020, the land continued sliding beneath Harris’ home and began collapsing beneath his neighbor’s home at 265 North.

Ultimately, the Harrises and their neighbors, the Hoonakkers, had to demolish their homes as the earth’s shifting was tearing the structures apart. The houses may be gone, but the landslide hasn’t shown any signs of stopping.

“It’s really moved in the last three months, and it’s creeping up to the edge of the road,” Bird said. “As soon as you get a crack in the ground, it’ll shear and then drop. And it’s slowly creeping our way.”

Bird joined the Harrises, Hoonakkers and other concerned residents in the subdivision to petition the city for help. City officials commissioned a geologic survey from Sunrise Engineering to explore the extent of the slide and to investigate possible causes.

According to the report, the Overlook subdivision is in a moderate landslide hazard zone and the root cause for the two houses’ collapse was groundwater from unconsumed irrigation. The effect of irrigation on the groundwater flow was estimated to be four times greater than the effect of natural precipitation.

Since the city published the survey in January, little has been done to either stabilize the land or address the groundwater issue. Earlier this week, workers with the Ash Creek Special Service District shut off utility lines servicing the now-empty and deteriorating lots.

“We’re currently in the fact-finding stage,” LaVerkin city administrator Kyle Gubler said. “We’re taking into consideration the recommendations of engineers and professionals, and we’re looking at multiple options and trying to secure funding to work on this problem.”

For Bird and his fellow Overlook neighbors, the city’s response has been lackluster. David Anderson, who lives next door to Bird and across from the slide, said he hopes to see an effort to address the spreading cracks and collapsing soil.

He said the landslide is a safety hazard for more than just homes and nearby residents, explaining that some visitors hoping to satisfy their curiosity have put themselves and others at risk despite the city’s warning.

“We’ve had people come here that had their kids jumping down off the edge onto the flat spots,” Anderson said. “And it creates quite a bottleneck when people come driving around the corner and others move across the road to look at it.”

Gubler said that’s exactly why the city has put up warning tape, cones and “Keep Out” signs.

“It’s still private property so we’ve got to limit visitors, and we don’t want a hazard,” Gubler said. “With the approval of the landowners, we’ve put that caution tape up to hopefully prevent people from going out, looking off and getting in a bad situation.”

Whether the city or the subdivision’s developers knew about the extent of the groundwater problem beneath the soil remains to be seen, though several longtime area residents have reported the presence of a spring beneath that same hillside for as long as they can recall.

Nonetheless, the geologic survey does provide recommendations for addressing the current situation.

Groundwater flowing on the surface should be redirected away from the slide, and a proper drain system to channel underground flow could be designed with more investigation. The survey also recommends conducting a more in-depth hydrogeologic study to understand the flow of groundwater in that area.

Local homeowners, including Bird and Anderson, just hope the city acts before it’s too late.

“The City Council of the past created these problems, and the City Council of today is dealing with it,” Bird said. “I don’t believe they should have ever issued permits on this area. I hope they can stabilize this and keep it from moving. They’ve got to get rid of the irrigation water that’s coming through and follow what the engineering study tells them to do.” 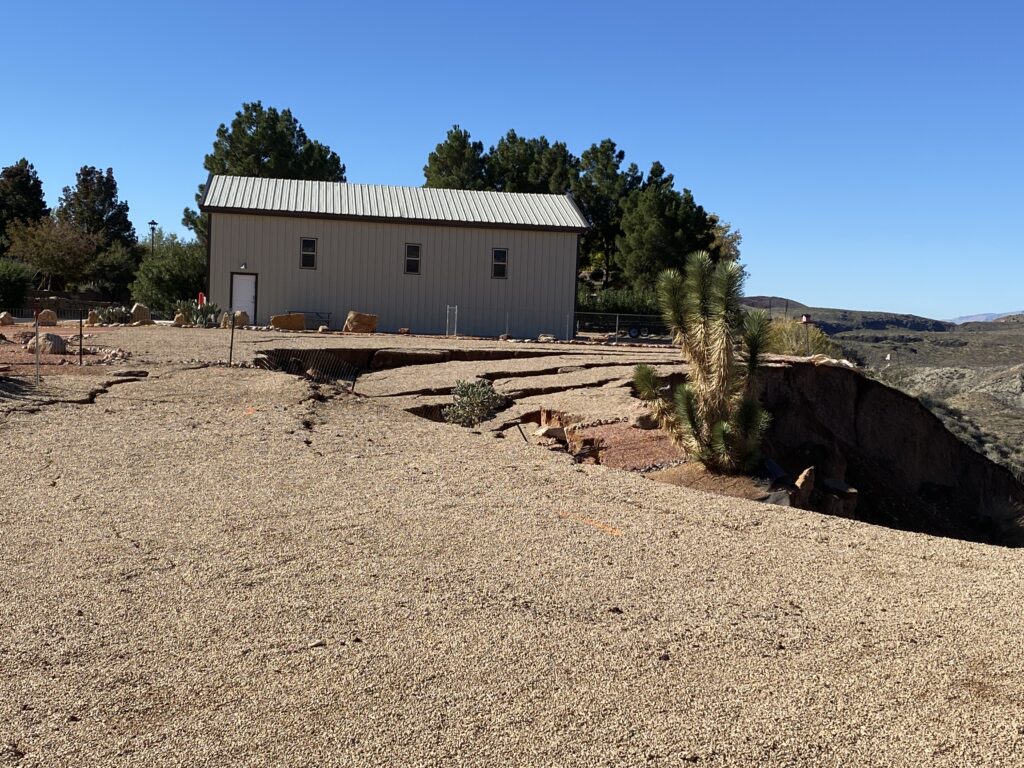 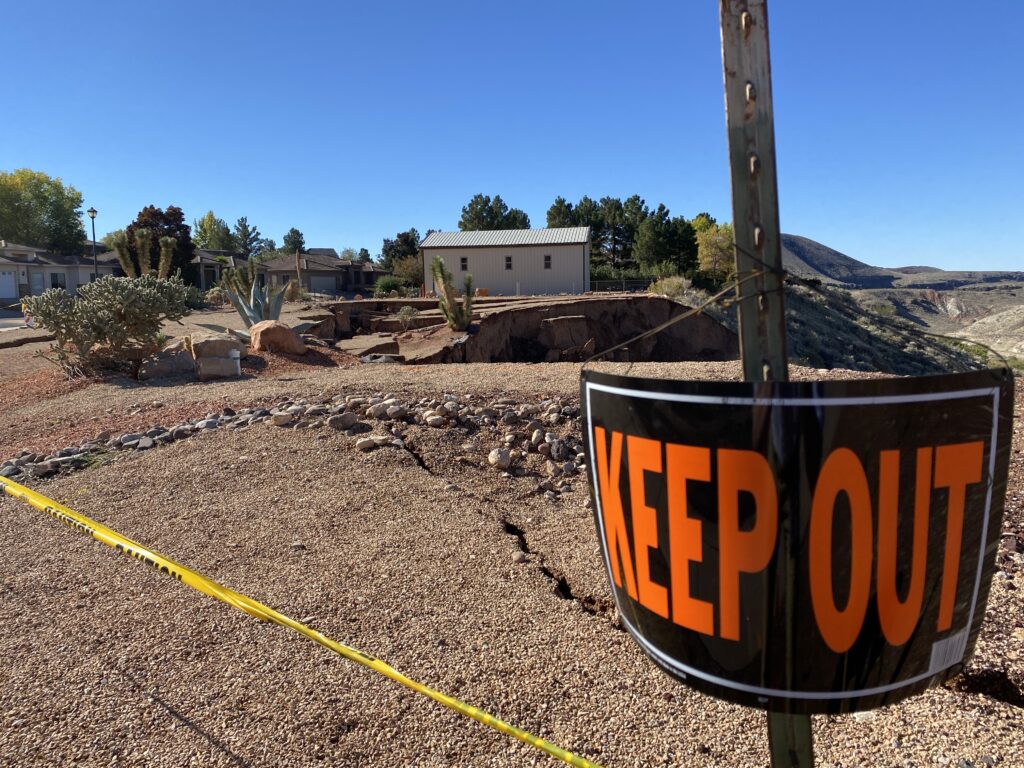 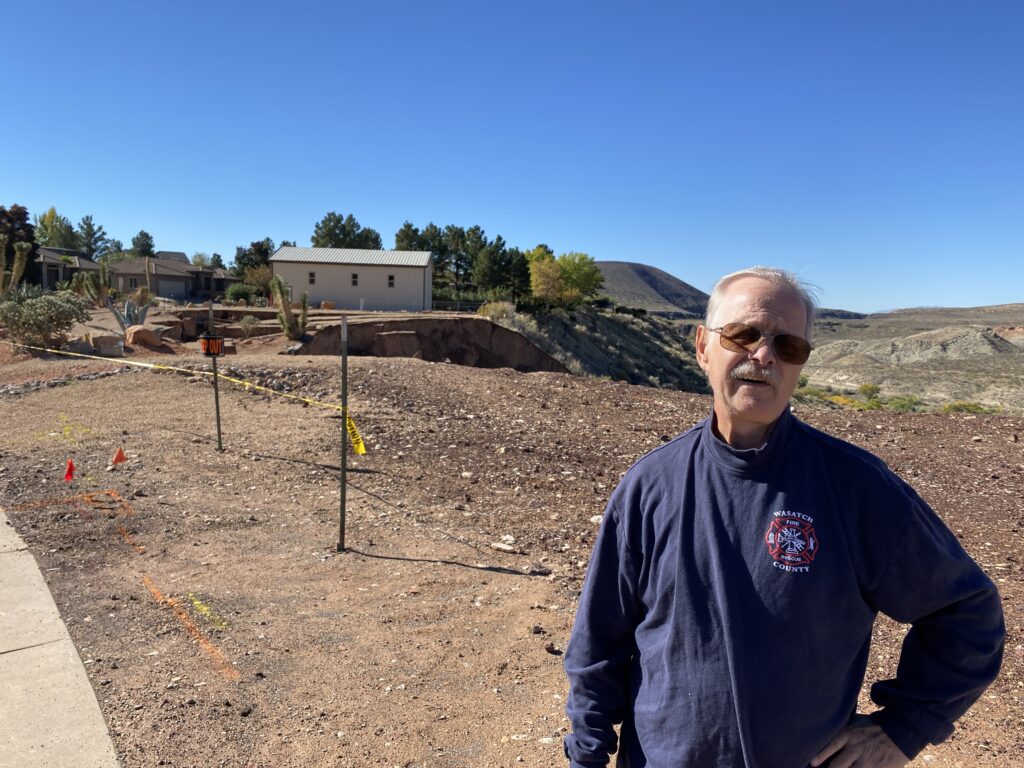 David Anderson lives across the street from sliding hillside, and shared his concerns about the safety of residents and visitors, LaVerkin, Utah, Oct. 27, 2021 | Photo by Ammon Teare, St. George News 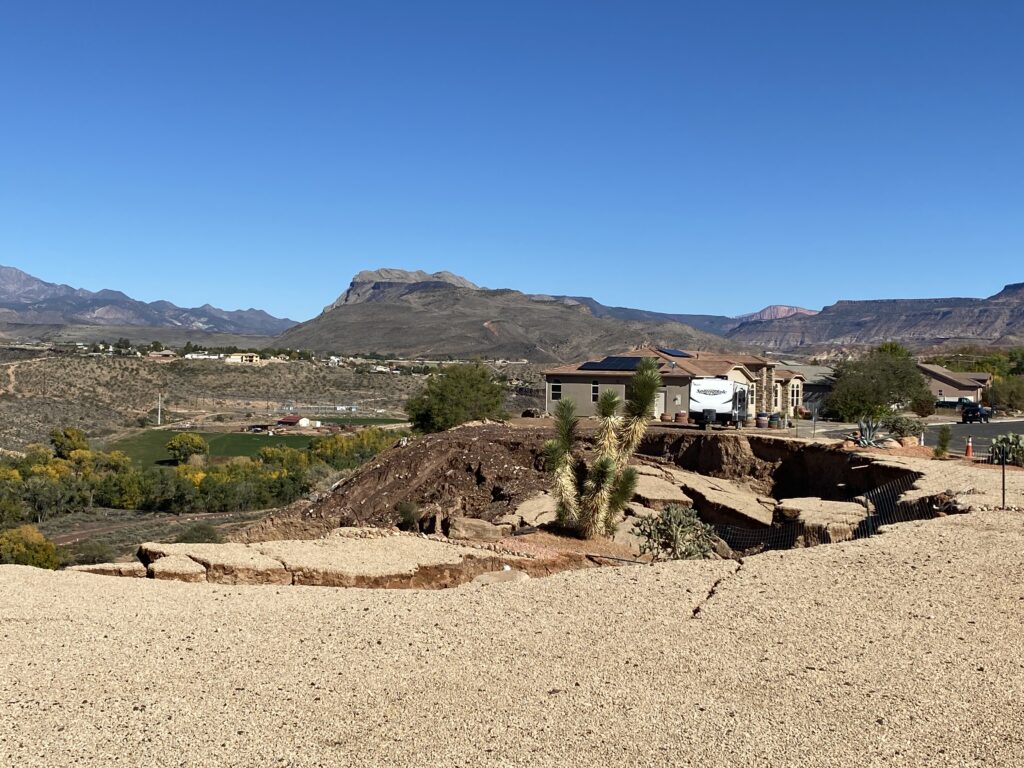 Landscaping and plant life are the last signs of two homes that were lost to an ongoing landslide, LaVerkin, Utah, Oct. 27, 2021 | Photo by Ammon Teare, St. George News 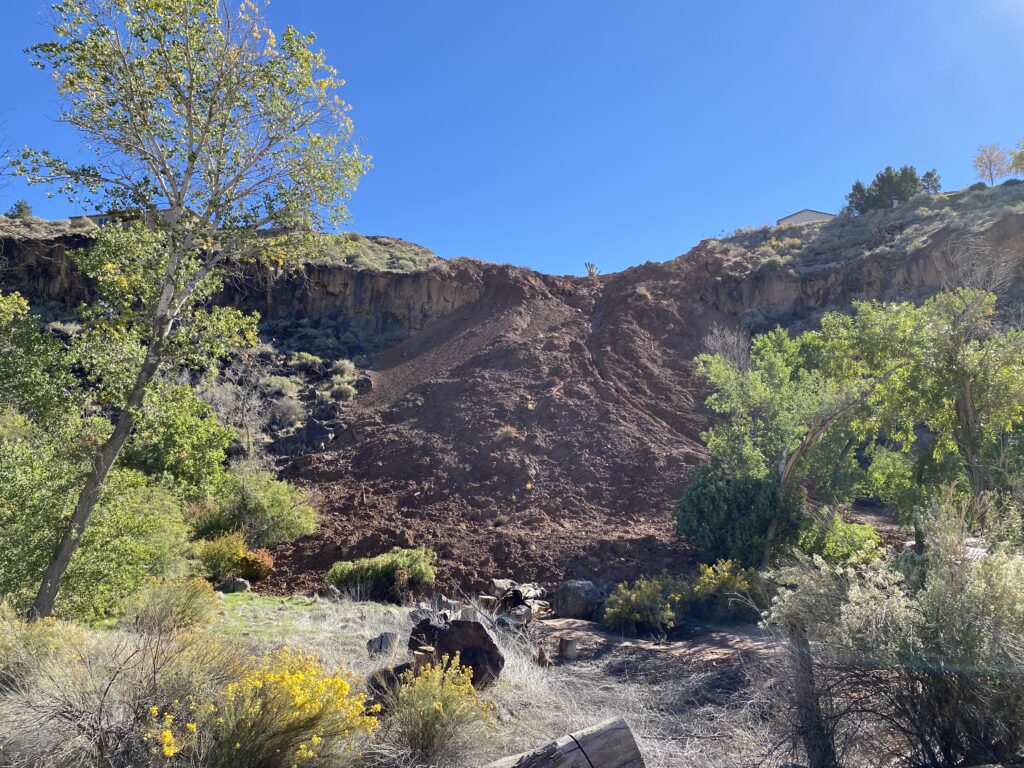 A view of the extent of the landslide looking up from beside the LaVerkin Creek below the Overlook subdivision, LaVerkin, Utah, Oct. 27, 2021 | Photo by Ammon Teare, St. George News 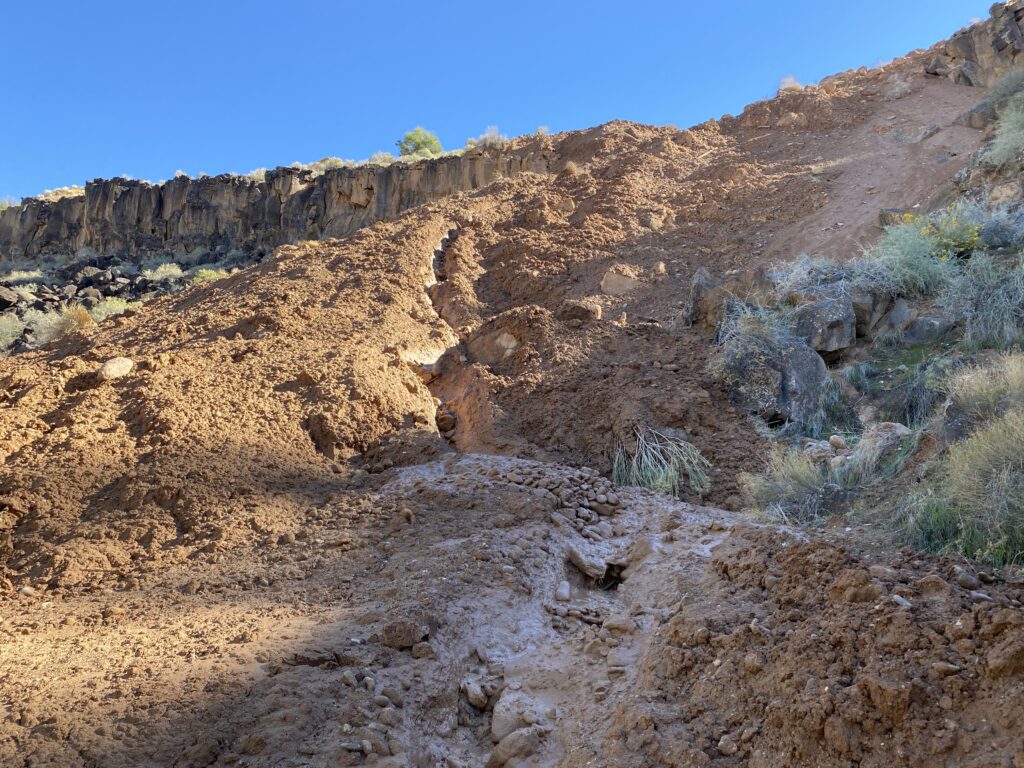 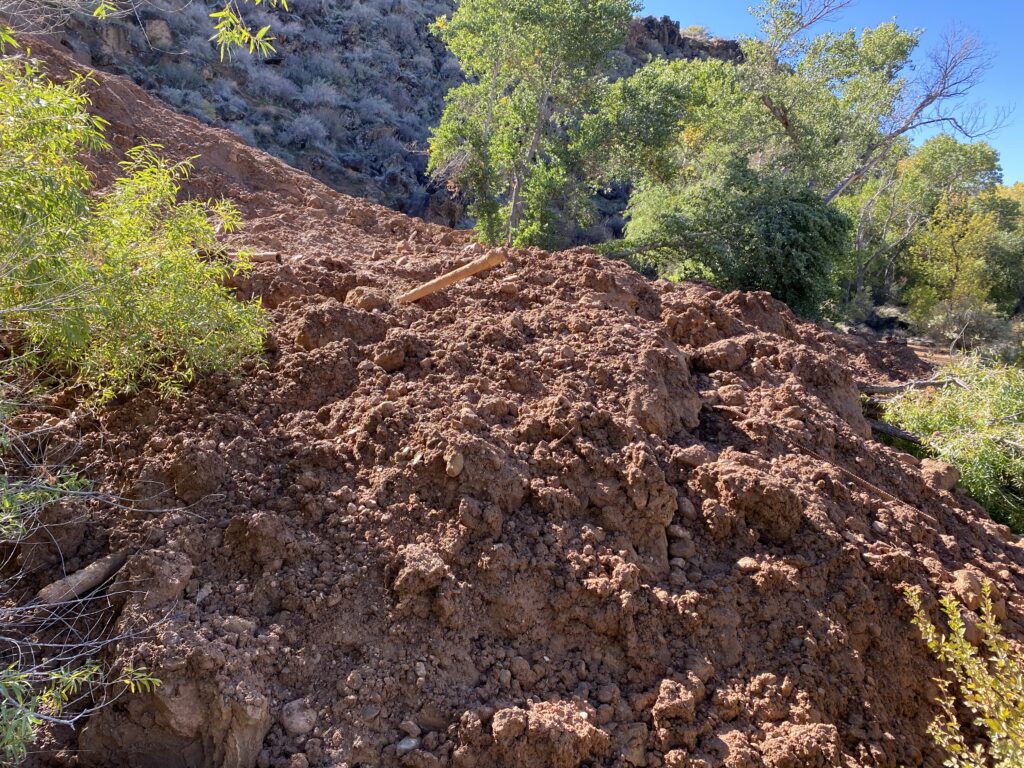 Pipes, rebar and other soil fixtures are scattered throughout the debris of the sliding hill, LaVerkin, Utah, Oct. 27, 2021 | Photo by Ammon Teare, St. George News 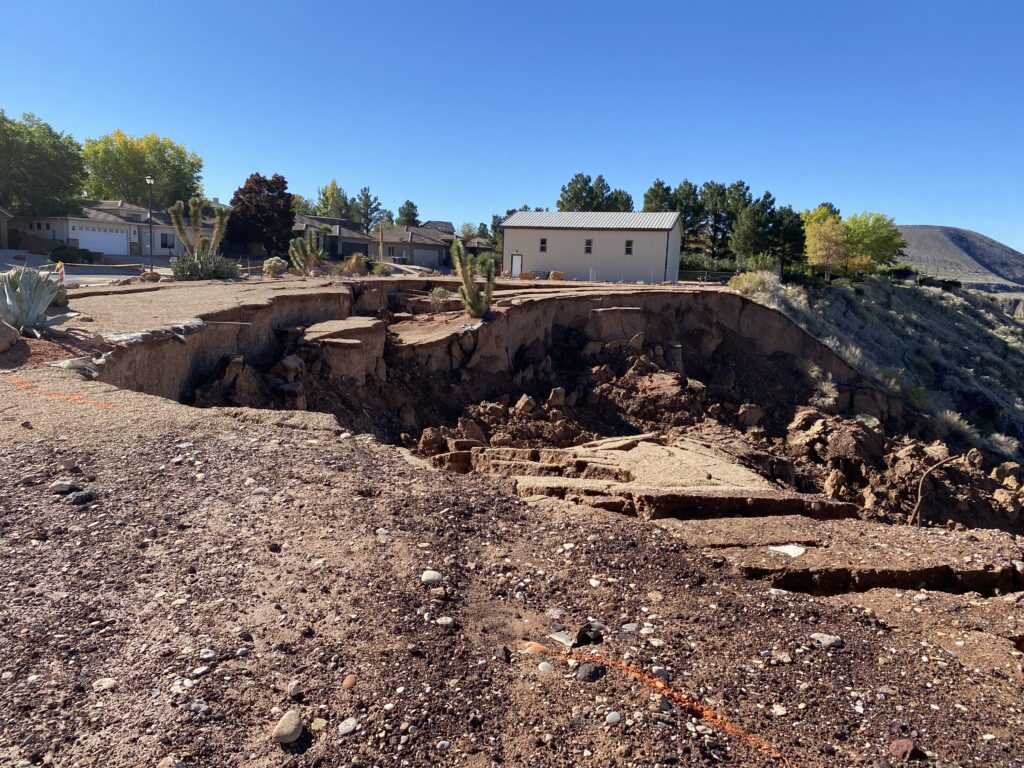 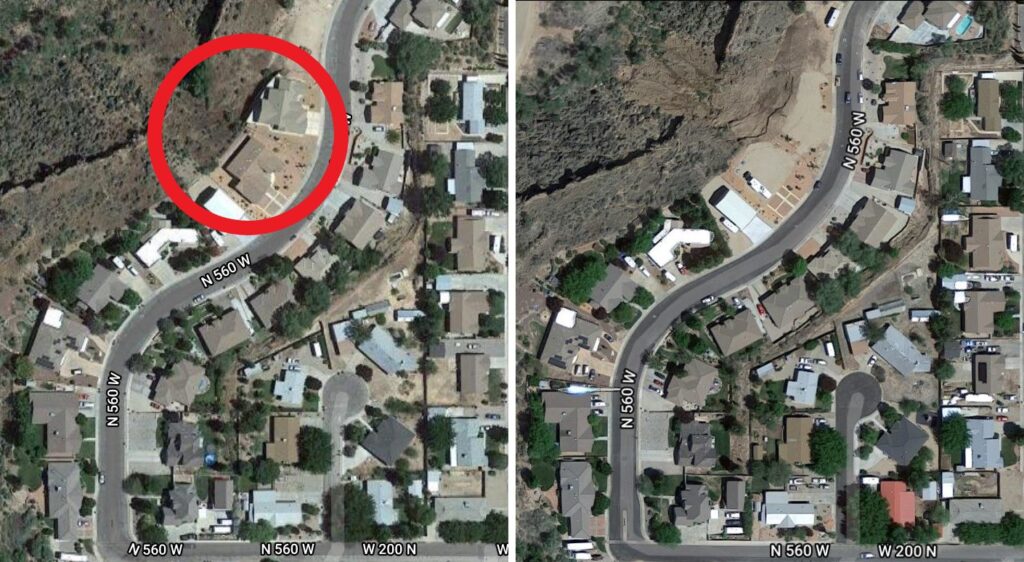 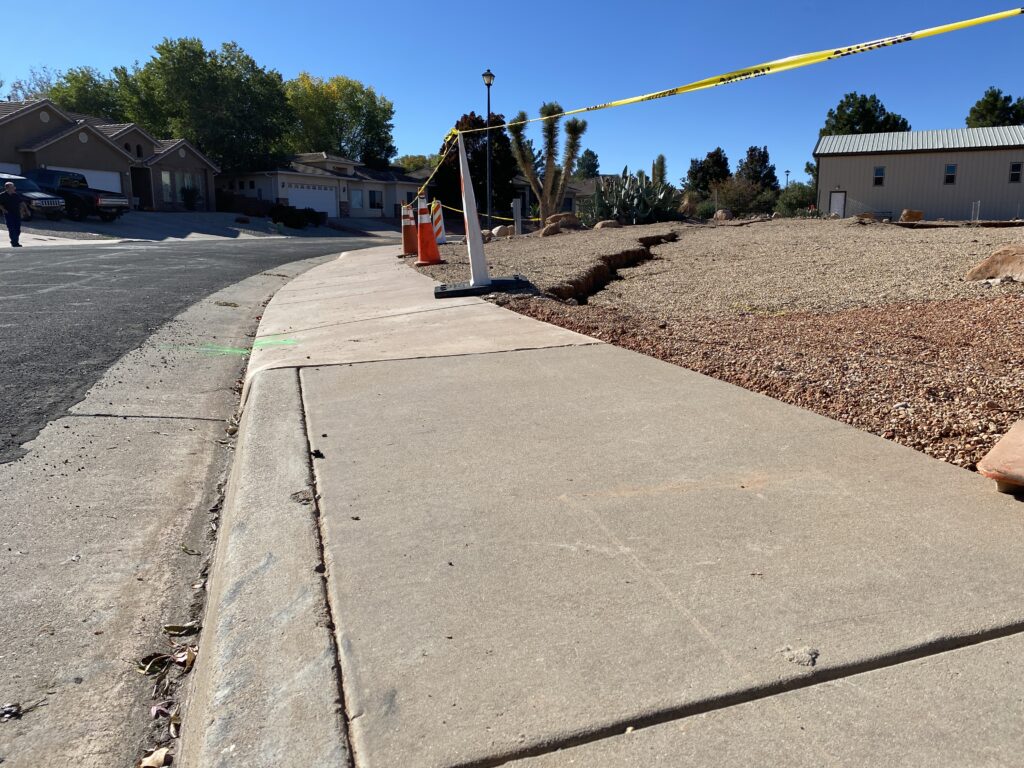 Cracks spread slowly towards the roadway. If the situation worsens, homes on North 560 West in LaVerkin may be stranded, Oct. 27, 2021 | Photo by Ammon Teare, St. George News