CEDAR CITY — Local and state officials say progress is being made in efforts to help the homeless population in Iron County and surrounding areas, but further collaboration and more public support are still needed.

The Iron County Local Homeless Coordinating Committee held its first in-person meeting in more than a year in late May, with more than two dozen committee members and guests in attendance, along with a few others participating online via videoconference.

The Iron County LHCC, which also covers the neighboring counties of Beaver, Garfield and Kane, is chaired by Ron Adams, a member of the Cedar City Council, with Peggy Green, director of Iron County Care and Share, serving as the committee’s co-chair.

Also in attendance at the May 27 meeting was Wayne Niederhauser, who was recently named by Gov. Spencer Cox as the state’s first homeless services coordinator and chief administrative officer of the Office of Homeless Services. He was accompanied by Tricia Davis, the statewide office’s assistant director.

The newly created office, established by the Utah Legislature through the passage of HB 347, is part of a restructuring effort to consolidate and centralize the state’s homeless services.

Niederhauser said that as he and Davis have traveled throughout the state since being appointed, they’ve been impressed by the collaboration they’ve seen happening among various agencies, government entities and organizations. 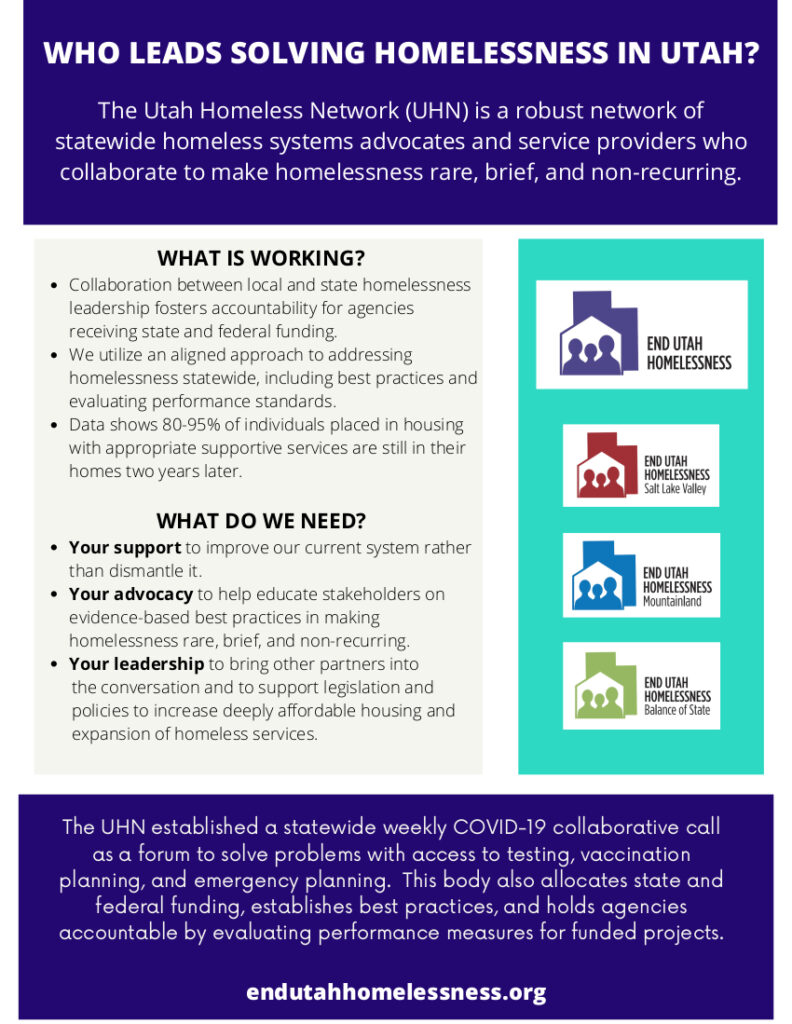 “The successful models I’m seeing are people really working together,” Niederhauser said during the meeting.

Green said she and other local committee members have endeavored to bring a variety of voices to the table. In addition to various elected officials and service providers, recent meetings have included the participation of representatives from such organizations and agencies as Utah Department of Workforce Services, the U.S. Department of Veterans Affairs, Adult Probation and Parole, local law enforcement agencies and the Cedar City Bike Works collaborative.

Green, who called the group’s monthly meetings “a catalyst for collaboration,” said the committee’s multiple objectives include planning, advocacy, and education.

“The council gets together and we talk about the pieces that each of the service providers offer, and all of the partners in the council, and how we are dealing with what we’ve got going on in hand,” she said. “At the same time, the council is meant to serve as an educational piece and advocate our connection to the state. And so, the council should also be working with the city, working with the county, and putting things in place for the community as a whole.”

Counting the numbers of homeless people

Officials say counting the number of homeless individuals in a given area can be a daunting task, especially within sparsely populated rural counties that span several thousand square miles.

“Just from our own outreach efforts, we estimate that we have upwards of 75 to 100 individuals living in homelessness (in Iron County), ” Green said. “But in all honesty, what changes our confidence in that number, meaning I don’t think we’ve got enough people counted, is that folks living in homelessness are moving further and further out on the edge of our rural areas. So, it’s harder for us to reach those individuals.”

Such people, she said, “are not those who are going to come in daily for showers or lunches or food. So we really miss out on that connection.”

Additionally, Green said that even though annual HUD-approved head counts are typically done in January, the one conducted earlier this year was limited in scope and format due to COVID-19 restrictions.

“We didn’t use a lot of volunteers, we didn’t cover too much ground, and we used a shorter survey,” Green said, adding that the local council is currently discussing plans to conduct a summer head count, even though the data collected won’t be tracked against previous years’ surveys.

“It won’t be anything we can use apples to apples, but I think it’ll help us understand what’s currently happening,” she said.

“We’re building an outreach program with the sheriff’s department, the police department and the BLM. We’re also going to partner up with SUU in their geology department as well, and to really get to those outlying areas of Iron, Beaver, Garfield and Kane.”

Involving and collaborating with the neighboring counties, Green noted, will also help them coordinate their resources and combine multiple funding sources.

The lack of adequate transitional housing

Transitional housing is a key area that local homeless advocates point to as a crucial “missing piece” of the puzzle.

Green explained that transitional housing is a place for people to go in between staying at an emergency homeless shelter and living in a more permanent residence.

Shannon Smith, housing coordinator for Canyon Creek Services, said transitional housing is especially needed for those who have either gotten out of or are in the process of leaving an abusive situation.

“One of the things that happens in transitional housing is you start to feel safe, you get a good rental history, which they often don’t have,” Smith said. “So then, they can go from there to a place that’s long-term.”

Smith’s coworker, Kaleigh Bronson-Cook, who is Canyon Creek’s awareness and prevention director, explained the “housing first” principle by which the service provider operates.

“It’s like, if you walk into a shelter and say, ‘I need help with housing,’ then I’m going to help put you into housing,” she said. “It doesn’t matter if you’re still using drugs. It doesn’t matter if you have 15 felonies, or whatever the situation is, housing is your human basic right, to just have a safe place.”

Green said that while reasons vary, all too often, abuse victims end up staying at the emergency shelter for far longer than the recommended 30 days, with some remaining there for months at a time.

“What ends up happening is we’re keeping individuals and families in homelessness, because of the lack of inventory, and the lack of attainable housing,” Green said. “So when we’re working with individuals that are transitioning from homelessness to a shelter, and then they’re housing-ready, but we can’t find places that are affordable. The only thing we can find are places that are over $1,000 a month. We’re literally keeping those folks homeless.”

Cedar City property manager Derek Morton, who has been striving to help provide solutions to the community’s lack of available transitional housing, talked about his efforts at the May 27 committee meeting.

“I realized you can make a lot of money as a property manager and suck as a human being,” he said. “I try not to do that. Too often, we’re part of the problem.”

Morton, who estimates that thus far he’s helped nearly 200 people in the community with transitional housing needs, spoke of the stabilizing effect that having a place to live can have on a person.

Morton recounted helping move three people into a transitional house that he described as “not amazing,” with its spartan furnishings donated by the local Deseret Industries thrift store.

“They were just ecstatic,” Morton recalled. “All the couches were donated from D.I., and they’re like, “I’ve got a roof over my head!”

“It was awesome,” he added. “So I focused more on, ‘How do I run my business in a way to connect the people to the resources needed to help them maintain housing?’”

That led Morton, who owns and operates NetGain Property Management, to hire a full-time housing advocate to work specifically with transitional housing tenants to connect them with what they need.

“What we’ve learned is that the majority of the time, rent isn’t the biggest issue in a tenant’s life,” Morton said. “Realistically, It’s the only one I should be concerned about as a landlord, right? You pay your rent, you stay. You take care of the property, you stay. But if we can’t work to solve the other problems, rent will always be an issue.”

Shaunna Manchester, who recently started working in her new position as NetGain’s housing advocate, said her primary goal is to help tenants know what resources are available. These can include financial literacy classes, mental health counseling and job skills training.

“Number one, we want to make sure they understand all their resources,” Manchester said. “Because the first thing you do when you’re behind on your rent is that you tend to avoid talking to your landlord.”

“It’s embarrassing, you know. Nine times out of 10, if somebody owes money, that’s mortifying for them.”

To counteract this tendency, Manchester said the company strives to maintain a healthy and open communication with tenants.

“No matter what’s going on, we’re talking about it and we’re having conversations,” she added. “They’re trying to find resources versus trying to hide.”

“That transitional piece doesn’t exist in our community right now, other than the units that Derek’s been able to create with his investors,” Green said.

“It’s not just that some things are unaffordable, it’s that almost everything is unaffordable for a majority of our residents, and a majority of folks that are looking for housing. It’s just not there right now, and I think that’s what’s very difficult.”

Looking ahead to future goals and solutions

Green also was recently named to Utah’s newly created state homeless council, which has yet to hold its first official meeting. She said she’s looking forward to continuing to work toward viable solutions at both local and state levels.

“One of the conversations we have to have in our community is poverty,” Green recently told Cedar City News. “It’s directly related to housing and hunger. And if we do not acknowledge and recognize that Iron County is at a 20% poverty level at this point, and make some significant changes, we’re not doing right by our community.”

“I mean, our community is incredible,” she added. “I’m of the belief that if issues can be solved, that they can be solved in our community. I feel very strongly about that. I think we just need a collaborative, honest and frank approach. Because we’ve got to invest in healthy families and healthy community members and we need to acknowledge how connected everything is. If we want a strong economy in our community, we have to make those investments in our human beings and do the right things.”

Green said Iron County Care and Share will be participating in a special day of service and remembrance on Sept. 11 to mark the 20th anniversary of 9/11. Information on volunteering or donating is available at their Facebook page, website or JustServe.org listing.

The next regular monthly meeting of the Iron County Local Homeless Council is scheduled for July 29 at 3 p.m. in the Libertad Community Room, 1044 Hovi Hills Drive in Cedar City. The Utah Department of Workforce Services is scheduled to make a presentation on increasing employment earnings.

“We don’t have to have homelessness in our community,” Green said. “And I do understand that it’s not always recognizable, and that’s part of our issue.”

Green is optimistic about the situation.