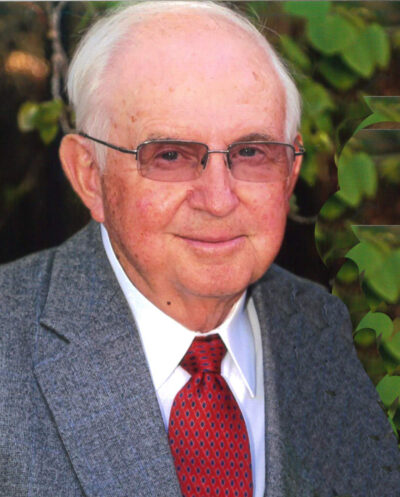 Garn Miller Huskinson, our kind husband, father, grandfather, great grandfather, and brother, died peacefully July 7, 2021, due to complications of kidney and heart failure. Garn was born July 5, 1932, in Rexburg, Idaho, the third child of Leo James and Gladys Miller Huskinson. He was raised on a farm in Rexburg and graduated from Madison High school. Having only one kidney at the time, Garn could not serve in the Korean War with his classmates. Yet, that lone kidney worked hard for over eighty years.

Garn served in the LDS Billings, Montana mission, and then graduated from Ricks College where he met his sweetheart, Shirley Loveland. Garn and Shirley were married in the Idaho Falls Temple on Nov. 10, 1954. They lived on the family farm in Rexburg for several years before moving to Provo, Utah, where Garn graduated from BYU with a degree in accounting. A few years later he returned to BYU to complete a master’s degree in accounting. In 1967, after passing the CPA exam on the first attempt, he was hired by the firm of Peat, Marwick, and Mitchell, Co. and the family moved to Arizona.

Garn’s family often teased him that he has the “seven-year itch,” because it seemed he started a new business venture every seven years. These included Vice President of Fidelity Savings & Loan in Douglas, Arizona, professor of accounting at Southern Utah State College (now SUU), co-owner of an accounting firm in Cedar City, Utah, and then establishing a new branch office in St. George, Utah. He later worked as a stockbroker at Zion’s National Bank before retiring to the golf course.

As a devout member of the Church of Jesus Christ of Latter-day Saints, Garn had a strong testimony of the divinity of Jesus Christ. He held leadership positions throughout his life as he served family, church, and community. While living in Cedar City, Utah, he was elected as a City Councilman. Once in St. George he served as the Washington County Republican Chairman. He enjoyed his time serving in the Rotary Club, and as a board member of Dixie Regional Hospital. Garn especially enjoyed being part of the Dixie State University Colonels Club.

After his sweet wife, Shirley passed away in 2008, Garn was blessed with a second marriage to Colleen Poulsen of St. George and Salt Lake City. Her love and support have sustained Garn for over 12 years. Colleen has been warmly welcomed into the family, and his children affectionately consider her their “bonus mom.”

Garn will be sorely missed by all that knew him. He leaves a legacy of love and service. He is survived by his wife, Colleen Poulsen Huskinson, his children David (Tina) Huskinson and Gaye (Bruce) Sullivan of St. George, Utah, Jodie (Richard) Jones, of Salt Lake City, and Julie (Randy) Bleazard of American Fork, Utah; and one brother, Morris (Linda) Huskinson of Weimar, California. He will also be missed by 14 grandchildren, and 26 greatgrandchildren. He is preceded in death by his first wife, Shirley Loveland, his parents, brother Sherman, and sisters Ruth Huskinson, Karen Gummow, and Ila Jean Moore.

The family would like to express their appreciation to Zion’s Way Home Health & Hospice, and particularly to Michelle Mumford Smith. Their kind and professional service provided peace and comfort during dad’s final journey.

Live streaming webcast is available at www.metcalfmortuary.com by clicking on the obituary, then click on broadcast at the bottom. Webcast will remain on-line for 90 days.

Arrangements entrusted to the care of Metcalf Mortuary, (435) 673-4221. For condolences, obituary and funeral listing, please visit our website at www.metcalfmortuary.com.