ST. GEORGE — Firefighters and police have temporarily closed the building that houses Dixie Nutrition and Gunn Chiropractic after a series of unusual sounds revealed damage to the structure’s roof.

Dixie Nutrition Owner Greg Gillespie was inside his store when he and the other occupants began hearing the noises.

“We started hearing some cracks and some strange noises, so we thought somebody was on the roof,” Gillespie said. “I don’t think we saw anything move, but then we realized there was something wrong with the roof so we got everyone out of the store.”

While St. George News was on the scene, an audible “whumph” sound was heard, followed by a small tremor that shook the building and vibrated the windows. The employees and firefighters congregated near the storefront had to back away for a short period of time.

There were about 15 people in the building when the noises were first heard, Gillespie said. Dixie Nutrition employees reported hearing the noises from a number of places around the store, indicating that the roof’s support structures may have been damaged in multiple places.

Sharing the building with Dixie Nutrition, the offices for Gunn Chiropractic were closed for the holiday, though Gillespie said he notified the owners.

Shortly before 4 p.m. on Monday, the St. George Fire Department was called to investigate problems with the commercial building. Battalion Chief Darren Imlay said the building was already evacuated by the time he arrived, and he congratulated the owner and employees for responding as they did.

“They did well,” Imlay said. “The manager investigated and found that it could be an unsafe situation, so he hurried and moved his employees out, which was absolutely the right thing to do.”

Imlay said the firefighters who investigated the structure indicated that several roof trusses had sustained significant damage, and may have been the cause of an imminent collapse. He said the building isn’t coming down anytime soon as far as he could tell, but the fire department is taking every precaution in the meantime.

“If it continues to move and gets enough pressure on it, you can get the whole thing to fall,” Imlay said. “We’ve shut off power and water in case there’s further damage so it doesn’t create an electrical hazard or a flooding issue. For the time being, they’ll be shut down.”

The businesses’ return depends on an evaluation by a structural engineer. The building’s owner has been notified, Gillespie said, and he hopes that they can fix any damage and resume normal operations as soon as possible.

The St. George Police Department assisted fire personnel with securing the area and responding to the incident. 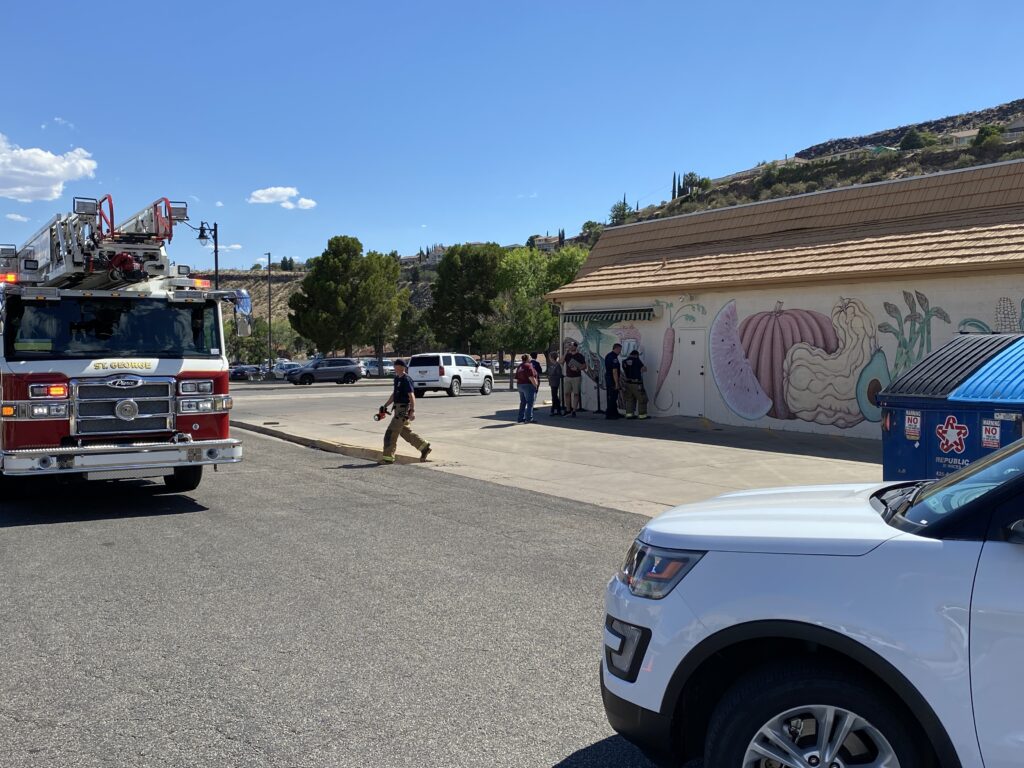 First responders and witnesses gather in the shade and discuss the extent of the damage, St. George, Utah, July 5, 2021 | Photo by Ammon Teare, St. George News 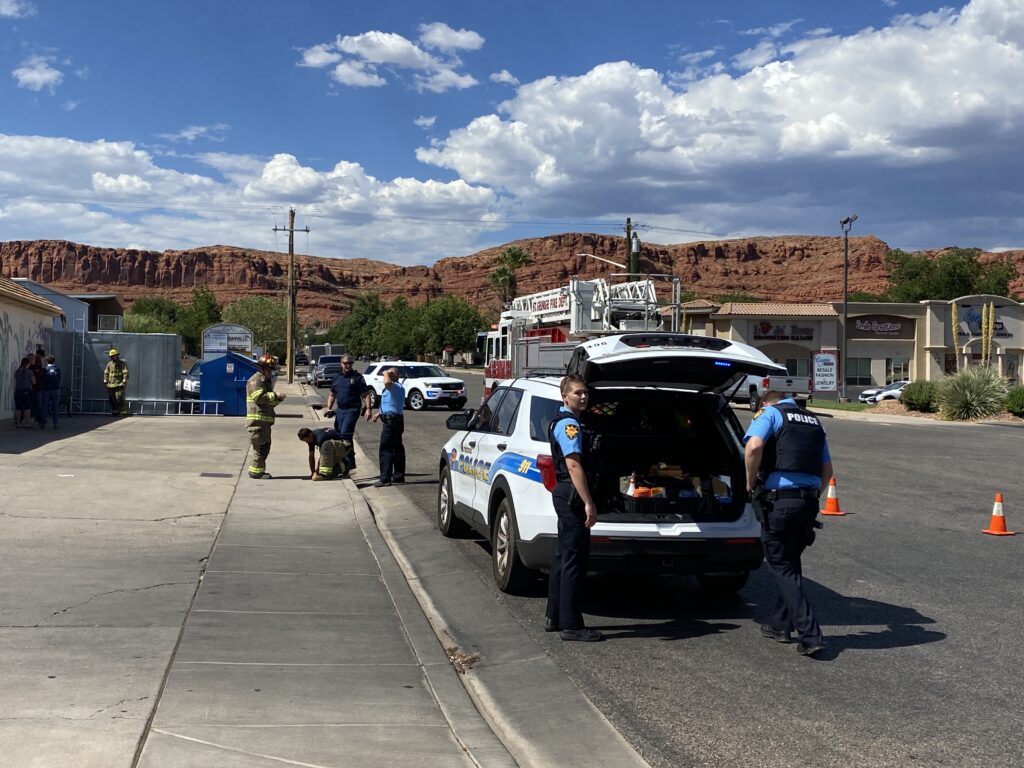 Police and firefighters were on the scene to investigate the source of the crackling noises and assist with securing the area, St. George, Utah, July 5, 2021 | Photo by Ammon Teare, St. George News 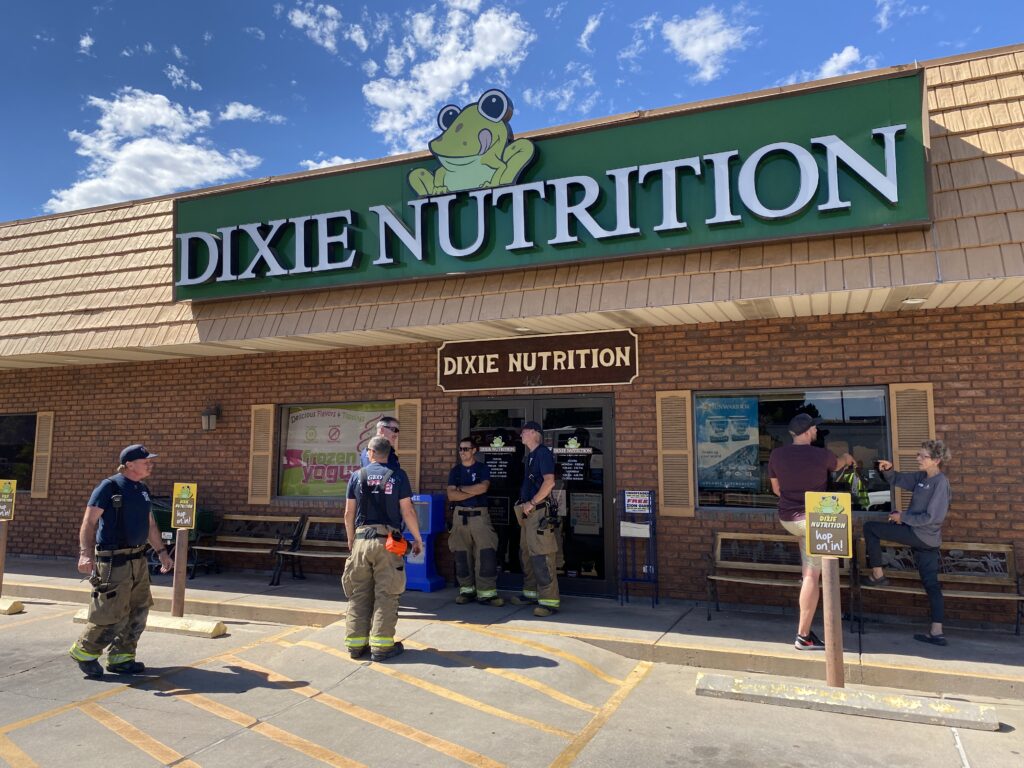 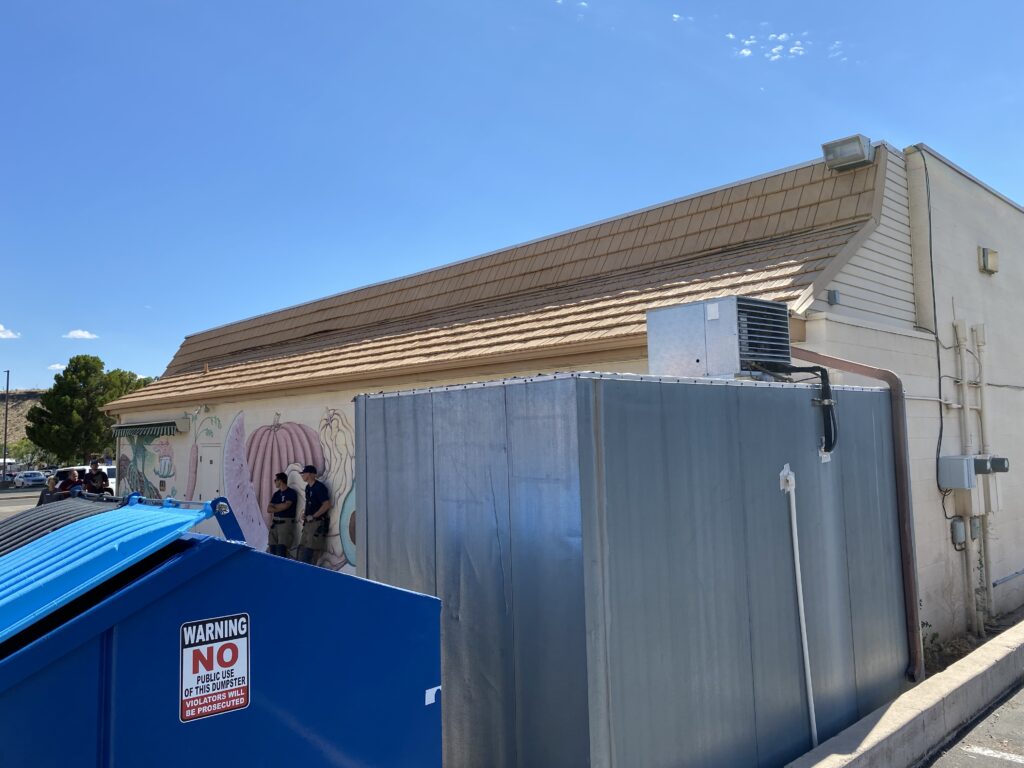 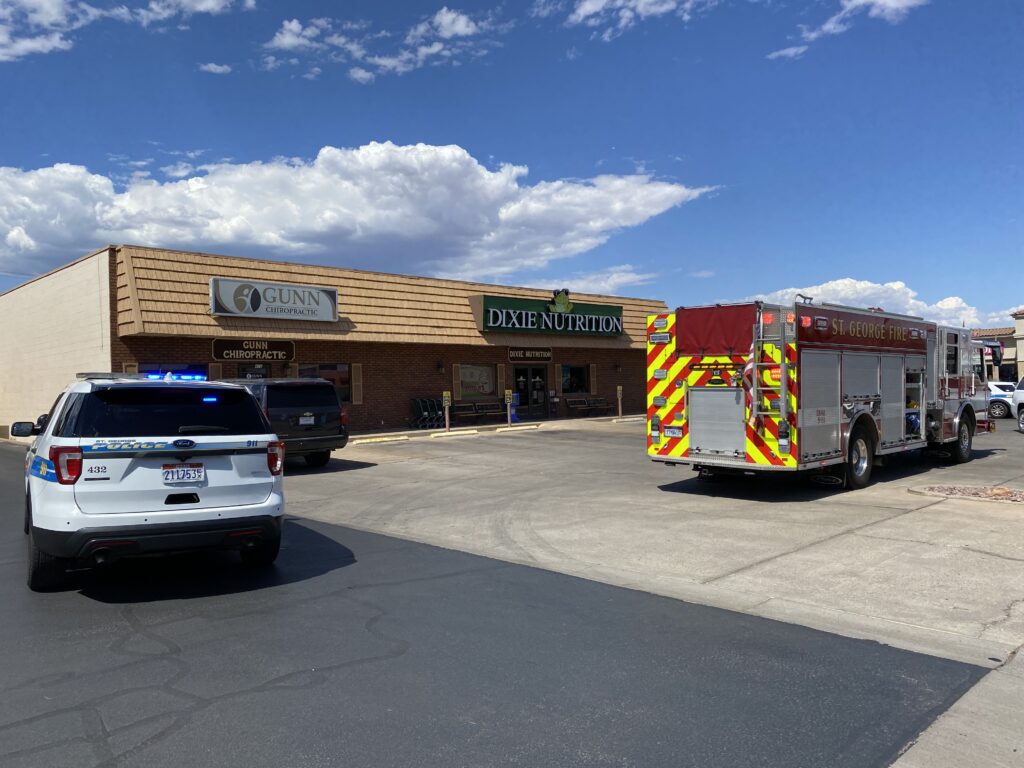