ST. GEORGE — At around 2:30 p.m. on Sunday, a motorist traveling southbound on I-15 through the Virgin River Gorge reportedly sparked a brush fire when he pulled over to inspect his vehicle. As the flames spread down to the dry creek bed below, fire crews from multiple nearby communities converged to address the incident.

With temperatures as high as 115 degrees, the men and women working to stop the fire’s spread had to contend with the heat of the sun and the flames. A firefighter with the Bureau of Land Management suffered heat exhaustion, requiring treatment in an ambulance provided by the Beaver Dam-Littlefield Fire District.

“He didn’t have to be hospitalized,” said Micah Fey, the incident commander with the Arizona Strip District of the BLM. “He got about two bags of IV, maybe two and a half. We usually give them at least the rest of the day, if not the next day, off just to recuperate.”

In addition to the precautions necessary for working along the busy interstate, the firefighters did their best to exercise caution when it came to working out in the heat.

“Anything over about 105 (degrees) is just really difficult in any situation. You can’t stay cool,” Fey said. “We mitigate it by rotating personnel in and out of the truck. We’ll send a couple of guys out, let them work the fire and then slot people out every hour so people get a chance to cool off. That’s about all you can do.”

Luckily, the geography of the gorge helped the firefighters corral the fire’s spread and contain it fairly quickly, Fey said. The burn ultimately spread about 10 acres through the brush, dry grass and litter along the roadside and down the hill.

After crews from the St. George Fire Department, Beaver Dam-Littlefield Fire District and BLM Fire and Aviation out of Utah and Arizona arrived at the scene, it took about three hours to contain the blaze.

To better fight the fire, traffic southbound on I-15 was funneled into one lane right around the point of ignition. This small adjustment slowed traffic to a crawl back at least 4 miles – almost to the Utah border.

Once the fire was contained, the firefighters began to gather their gear and to leave the scene. However, the brush reignited at least twice, always burning inside the previously scorched patch and not spreading beyond initial containment.

“After we were done, a little pocket was ignited inside the lines, so we went back to it to put that out,” Fey said. “We had just gotten back to town and were refilling our trucks with fuel and water and then we got called back down. Same thing: it was just another interior pocket.”

Fey said his team would return around 5:30 a.m. on Monday to check for hot spots and to make sure the fire didn’t reignite again. He said he hoped they’d be finished there at least by 10 a.m. so they could beat the heat. 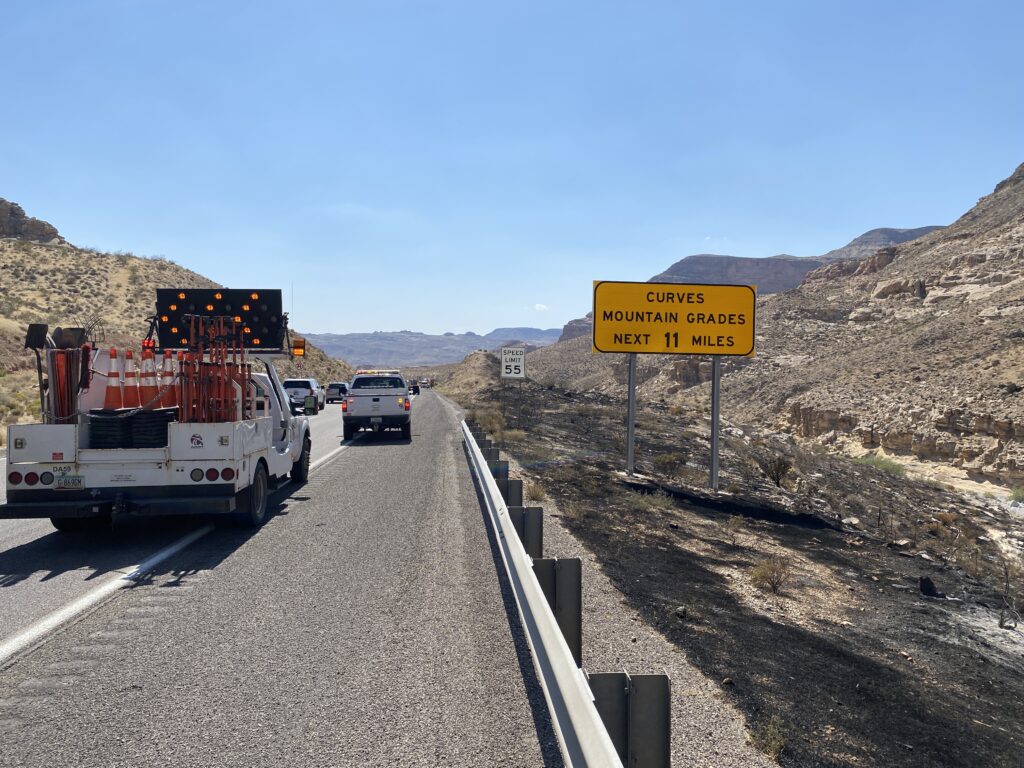 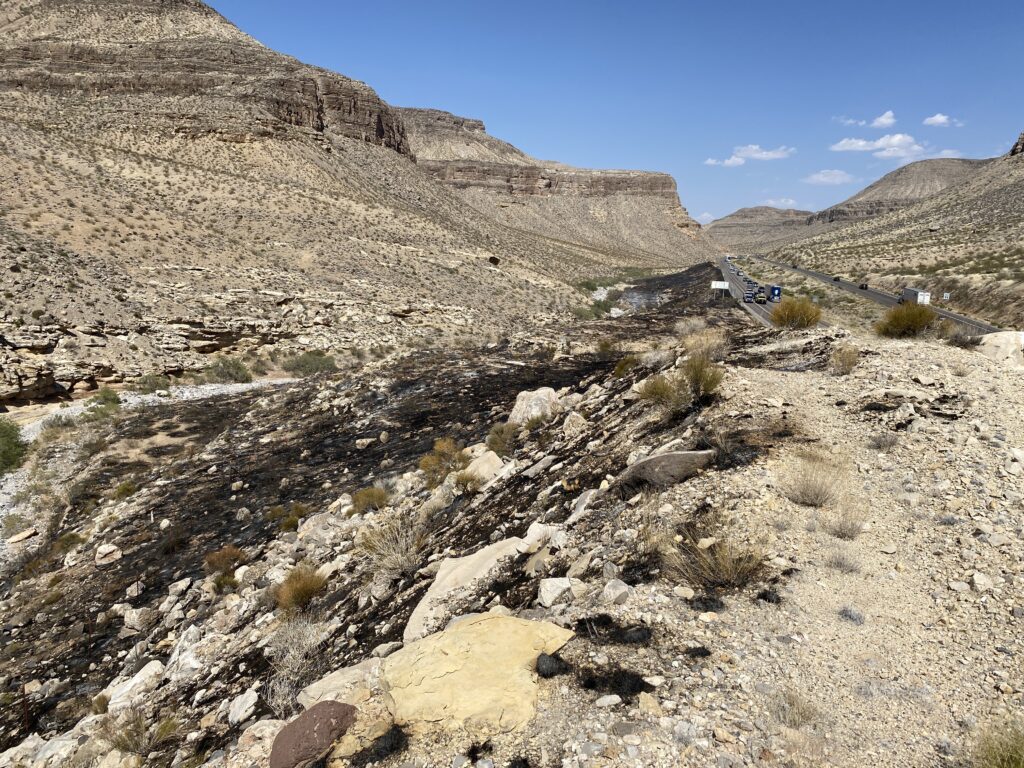 A view from a hill showing the extent of the fire, Virgin River Gorge, Arizona, June 20, 2021 | Photo by Ammon Teare, St. George News 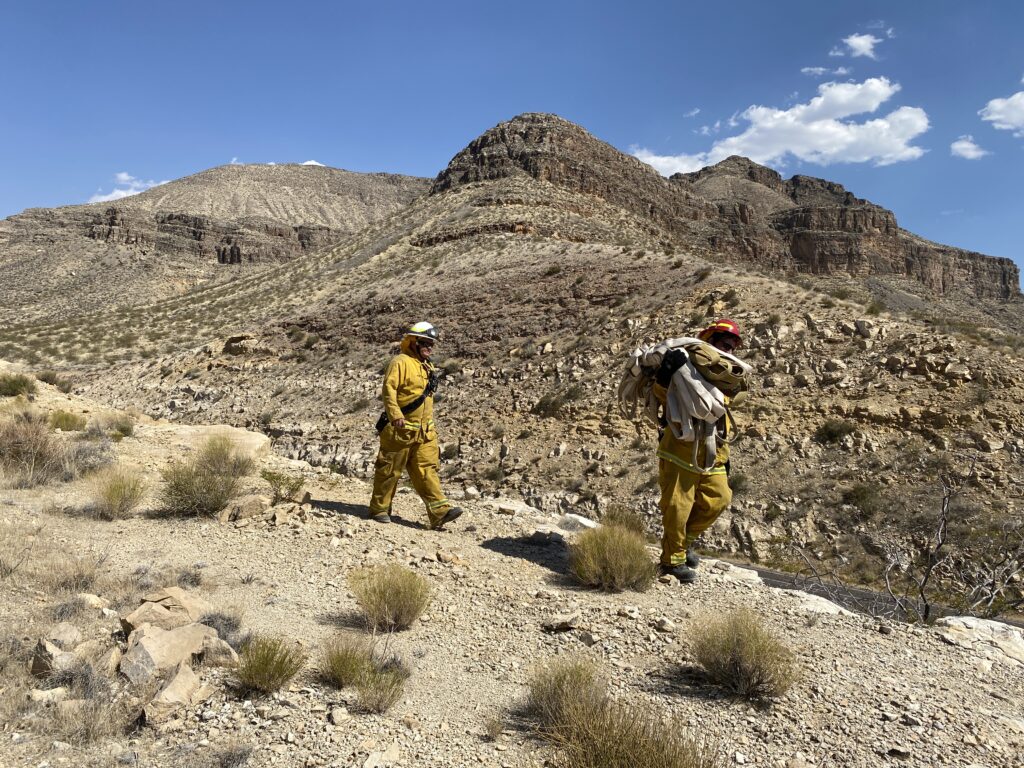 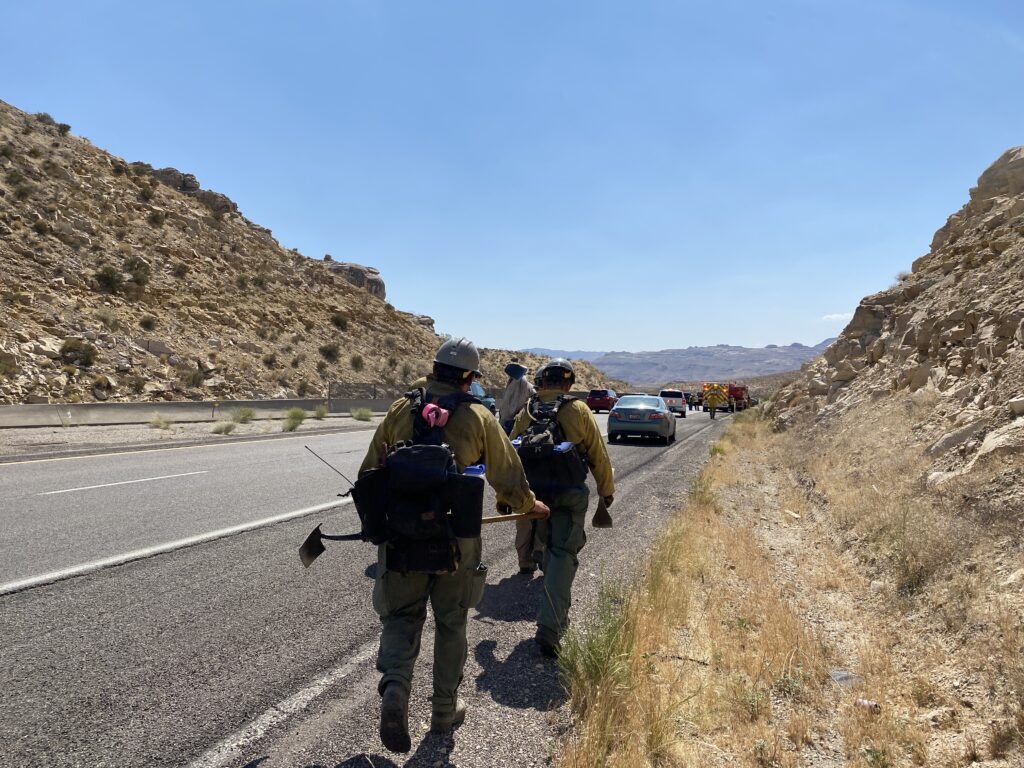 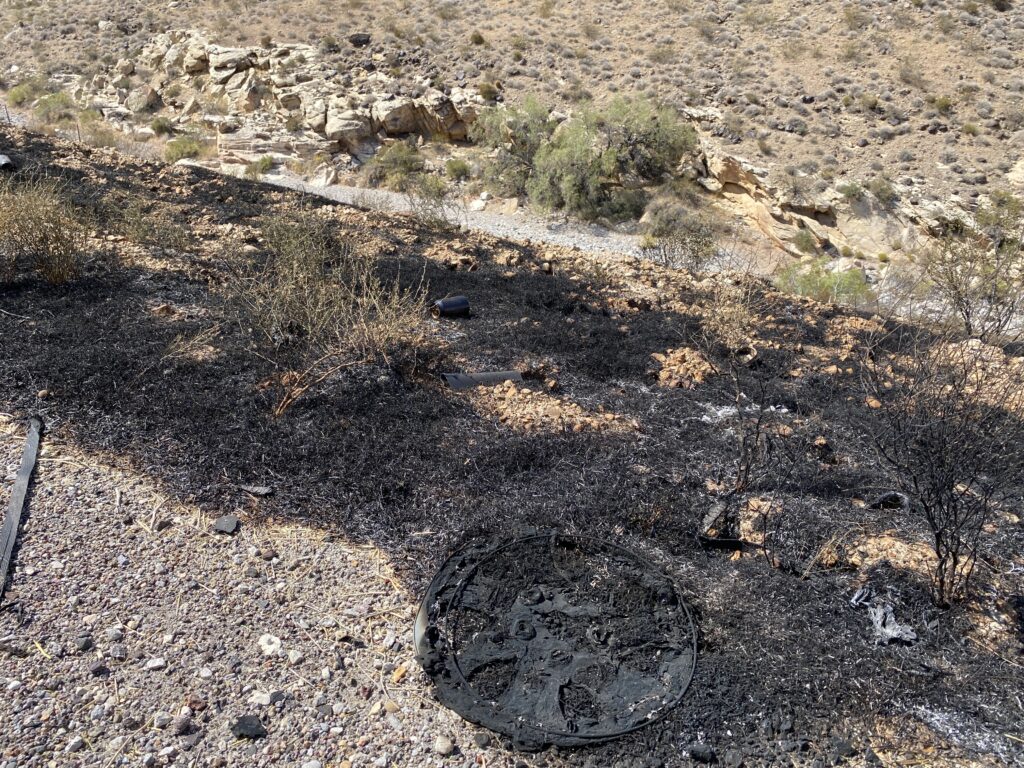 Garbage and other debris along the roadside was ignited along with the natural fuels, Virgin River Gorge, Arizona, June 20, 2021 | Photo by Ammon Teare, St. George News 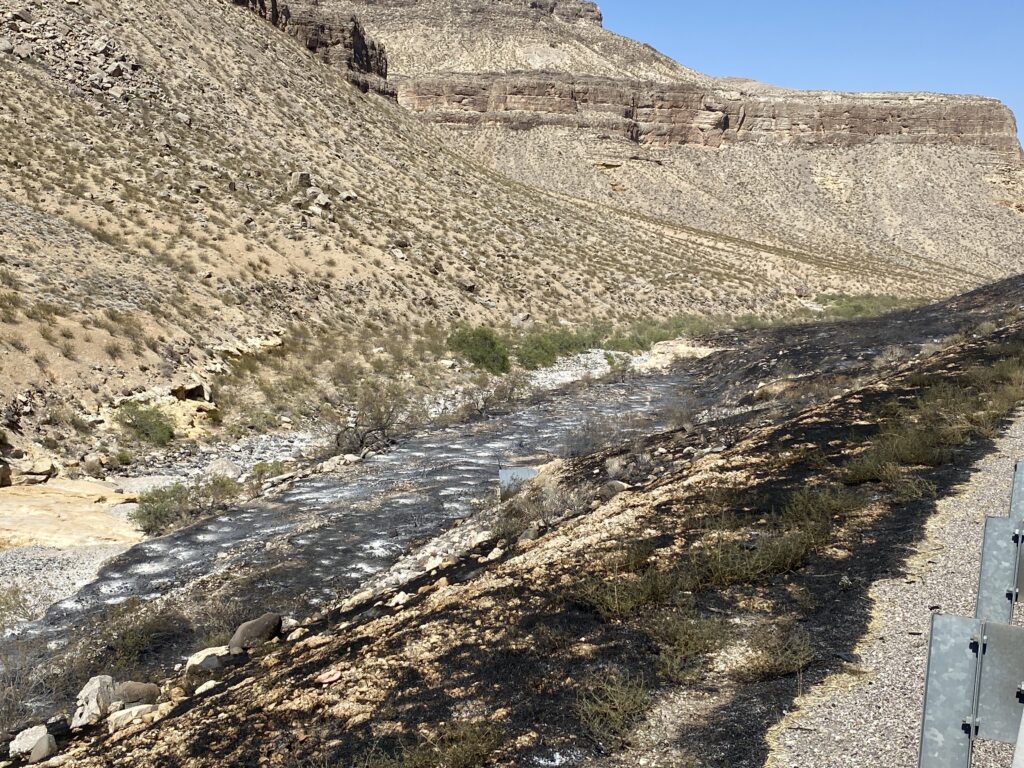 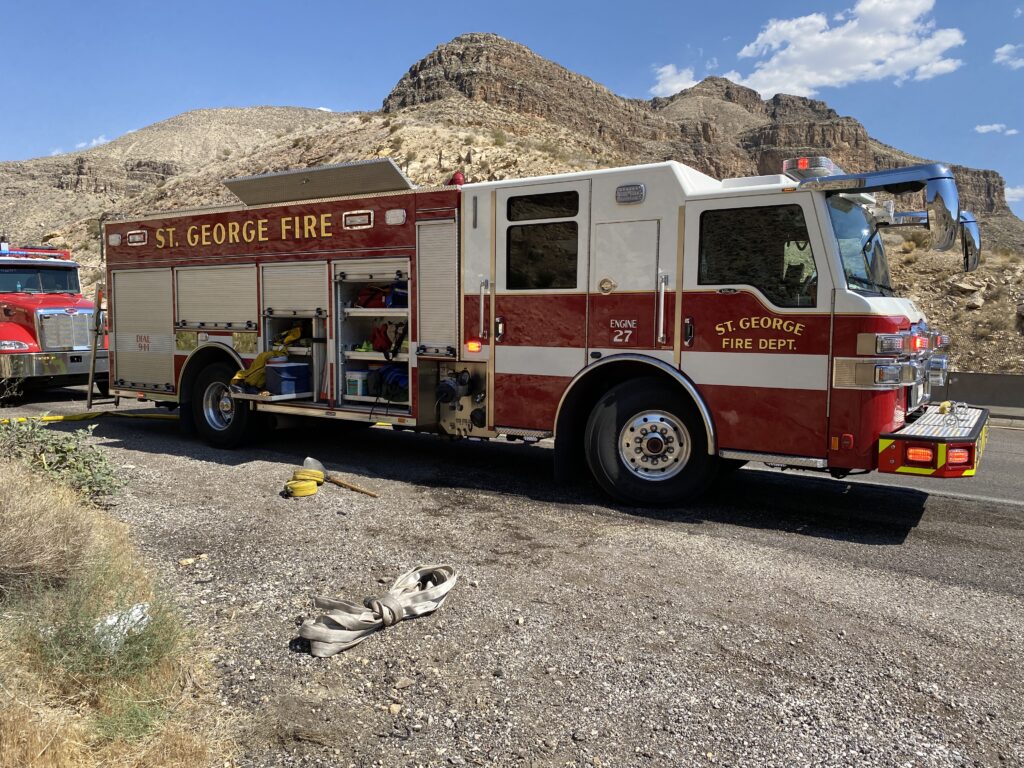