ST. GEORGE — A large workshop located at a mobile home park in Mesquite was destroyed Monday in a fire that created immense heat when pressurized tanks of fuel and other materials began to burn.

On Monday evening firefighters and emergency personnel responded to a structure fire at the Stateline Mobile Home Park on West Mesquite Boulevard shortly before 8:30 p.m. PDT.

Fire crews arrived to find a manufactured home, which had been converted into a workshop, heavily involved in fire that continued spreading and posed a risk to a nearby motel, as well as a second trailer park close by. All occupants had cleared the building prior to the fire department’s arrival, according to a statement released by Mesquite Fire Capt. Spencer Lewis on Tuesday.

The first arriving crew initiated a defensive attack on the blaze, which is where efforts were concentrated to protect the nearby homes and other structures located just a few yards away. Crews were soon joined by Mesquite Fire Chief Jayson Andrus and Deputy Chief Shawn Tobler, who assisted in fire operations.

Multiple officers with the Mesquite Police Department also responded and evacuated all surrounding mobile homes in the area as well as the Mesquite Motel located nearby. Officers then cordoned off the street to prevent traffic from interfering with fire suppression operations that were well underway.

Firefighters continued to tackle the blaze spreading quickly through the workshop, fueled by the large number of tanks full of highly flammable, pressurized gas, as well as other hazardous materials.

As additional fire engines and crews began arriving at the scene, the fire spread to a nearby shed as well as a recreational vehicle parked near the structure.

By 10:30 p.m., the fire was contained to the initial structure where it continued to burn, fed by the vast amount of fuels in various forms littering the workshop. It was finally extinguished before it spread to any other buildings or homes, according to the report.

Crews remained on scene well after midnight conducting an overhaul to ensure that any embers that could smolder and reignite were completely extinguished. The fire is still under investigation and the cause has yet to be determined. No injuries were reported.

There was no one living in the manufactured building, Lewis said, it was only used as a workshop. The total estimated loss has yet to be determined, Lewis said, but there were thousands of dollars in tools and equipment inside of the structure that were destroyed, as well as the structure itself, which does not include the losses associated with the shed or the RV that were destroyed as well.

The costs will be determined as the investigation progresses, he said.

When the initial structure page came though, it was only one of several emergency calls requiring fire department and emergency medical personnel, leaving only two of the eight firefighters that typically man the fire station who were available to respond to the blaze.

Additionally, the fire at the mobile home park was only one of 22 calls the department responded to over a 24-hour period that began at 8 a.m. Monday morning.

Once crews were released from the structure fire, they responded to nine more calls received throughout the night. 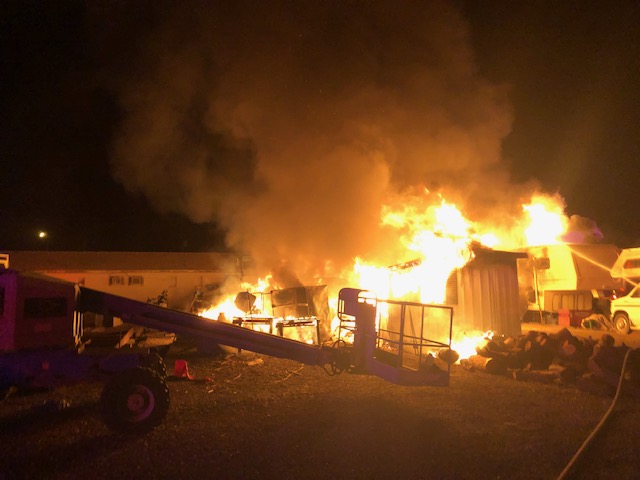 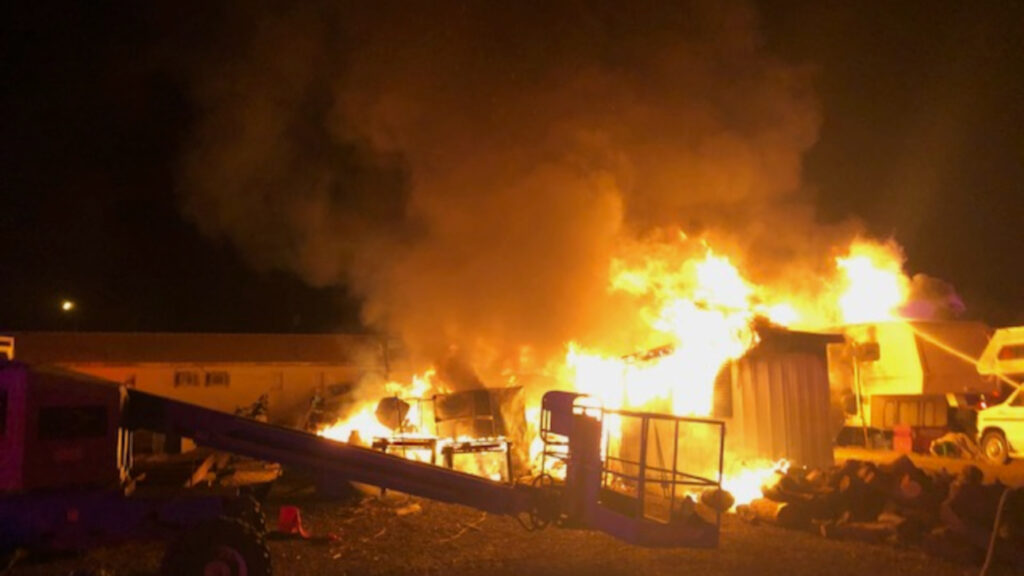 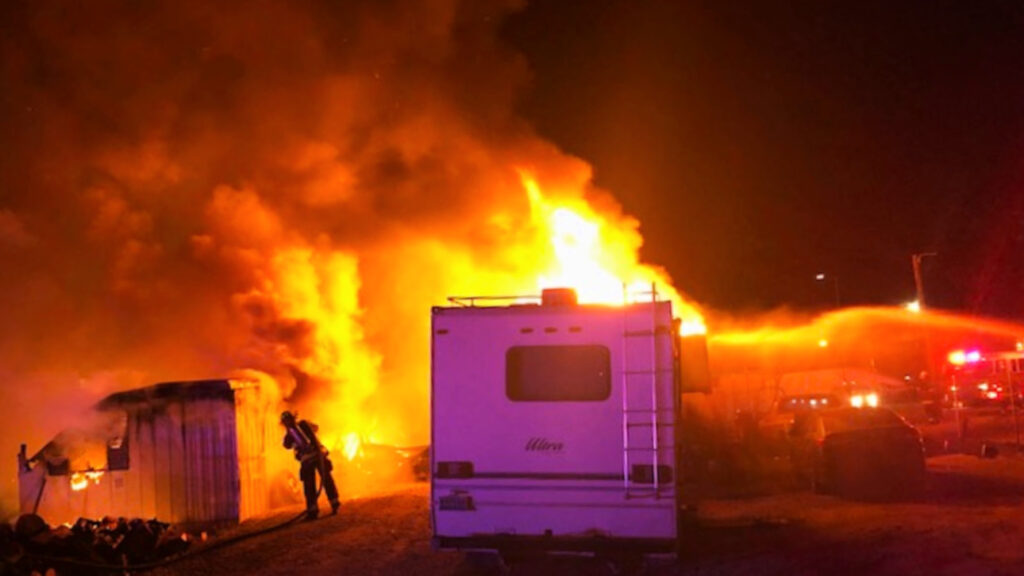 Fire spreads through an RV located near a workshop located at a mobile home park in Mesquite, Nev. April 19, 2021 | Photo courtesy of the Mesquite Fire Department, St. George News 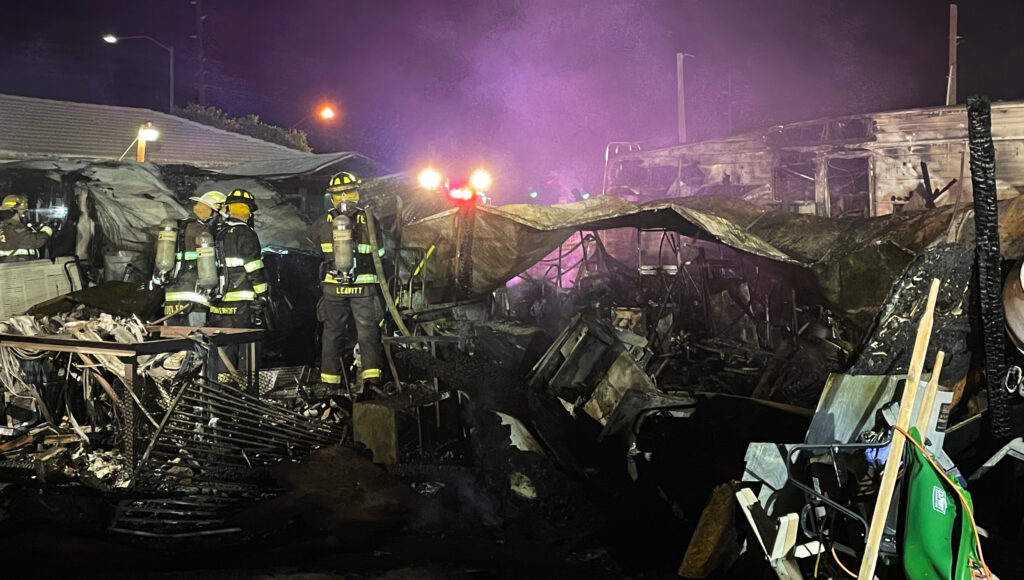 Fire destroys a large workshop, an RV and a shed located at a mobile home park in Mesquite, Nev. April 19, 2021 | Photo courtesy of the Mesquite Fire Department, St. George News 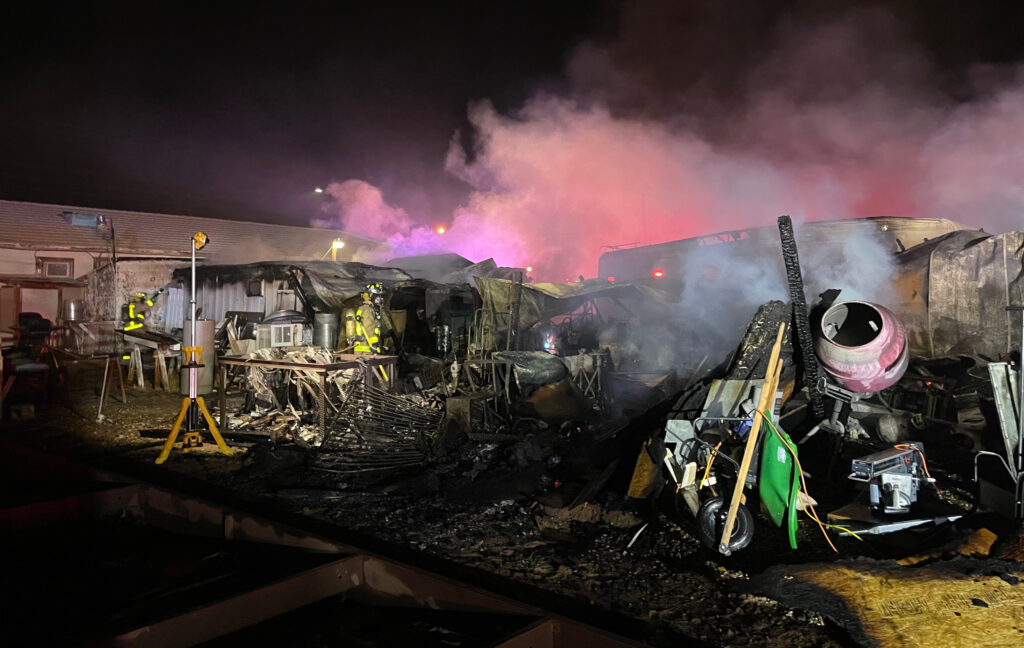 2 found dead in structure fire that destroys home near Littlefield

Back, side or stomach sleeper? Find the right fit for every preference at Best Mattress

Driver flown to hospital after careening down embankment just south of St. George