In this artist's rendering, bodies of dead Teratophoneus lie in the wetland region where they were likely killed by a flood. A Deinosuchus feeds on one carcass in the top right | Illustration by Victor O. Leshyk, St. George News

ST. GEORGE — In popular media like “Jurassic Park,” “The Land Before Time” and “King Kong,” large carnivorous dinosaurs like the Tyrannosaurus rex are always portrayed as solitary and fiercely competitive hunters. As scary as it is to imagine even one of those titanic meat-eaters chasing you down as prey, it’s even more chilling to consider trying to escape many of them at the same time. However, recent research suggests that might have been the case.

In 2014, paleontologists working in Grand Staircase-Escalante National Monument found a trove of fossils that included four tyrannosaur specimens. Over the next seven years, the research team carefully excavated and studied numerous fossils led by Dr. Alan Titus, a paleontologist with the Bureau of Land Management.

In a press conference held Monday morning, Titus and some of his peers studying the Teratophoneus remains announced that at least some of these ancient carnivores were social and may have lived and hunted in groups.

“I have talked to many tyrannosaur researchers, and a couple in particular are quite insistent that these animals simply did not have the brain power to engage in sophisticated social interaction,” Titus said. “With tyrannosaurs, you’re looking at a unique lineage of predatory dinosaurs called the Coelurosauria.”

Titus said one of the key features in the Coelurosauria is an enlarged brain.

“They actually have a larger cranial volume than their opponents or ancestors,” he said. “We interpret that as opening the door for potential increased computing power, if you will, in the brain and the evolution of some social behaviors.”

One might wonder why such a large and powerful predator would need any help in a hunt. One contributing researcher, Dr. Joseph Sertich with the Denver Museum of Nature and Science, said that social behavior may have helped the dinosaurs hunt larger prey and reduce individual risk.

“The same rocks that entomb this Teratophoneus group also entomb amazing horned dinosaurs like Kosmoceratops and Utahceratops and very large hadrosaurs like Gryposaurus and the Crested Parasaurolophus,” Sertich said. “Being in a social unit, these tyrannosaurs might have had a better chance at taking on some of these really large or really dangerous herbivores.”

The project at Grand Staircase-Escalante National Monument became an international research effort, and the research team published its findings in the open-access scientific journal PeerJ.

Fossils from the site were unearthed, cleaned and examined by BLM paleontologists, including Titus and lab manager Katja Knoll. Thorough investigation revealed that the fossils were from many individual tyrannosaurs of varying age and size, as well as other prehistoric fauna such as ancient turtles, fish, and a nearly complete Deinosuchus skeleton.

“One of these things is definitely not like the others, and that would be the tyrannosaurs,” Titus said. “So how did these tyrannosaurs end up in a lake? That became the first mystery we had to solve.”

By analyzing the soil from the dig site and comparing that to the minerals and rocks trapped in the fossils, the researchers concluded that the dinosaurs actually weren’t initially buried at that layer and may have been reburied after environmental changes.

That led researchers to wonder whether the tyrannosaur remains had simply gathered in the riverbed over time, which would not substantiate any theories as to their social behavior, Titus said.

Dr. Celina Suarez of the University of Arkansas, along with Dr. Daigo Yamamura, did a geochemical analysis of all the fossils to compare them to one another and find out whether they differed in key ways.

“We can look at diet, temperature and even the type of water or the isotopic composition of water that different animals were drinking,” Suarez said. “The Teratophoneus, the fish, the turtles, the crocodilians and the carbonate nodules (rock samples from the same soil layer) all have very similar rare earth element patterns, which suggests that they all died and were fossilized together.”

Using these geochemical tools, the fossils were also dated to about 76 million years ago. Now that they knew the fossils belonged together and were not deceptively grouped, the researchers were led to wonder what could have brought them together.

Titus said that the remains and the apparent cause of death – flooding – were remarkably similar to the earliest discovered and perhaps best-known evidence for social tyrannosaurs.

In the late 1990s, Dr. Phil Currie, a Canadian paleontologist, began excavating the Dry Island Buffalo Jump site in the province of Alberta. There he discovered the remains of at least 12 tyrannosaurs of varying ages that seemed to have been killed in another mass event. He theorized that the find represented evidence of social behavior, though it ran directly opposite of popular scientific theory, Titus said.

The discovery at Grand Staircase-Escalante National Monument is the first of its kind in the Southwest United States, but it adds to a growing body of evidence that seems to validate Dr. Currie’s earlier hypothesis. Tyrannosaurs may have been more intelligent and more social than was previously believed.

The fossils were discovered in the Kaiparowits subunit of the national monument, at a site now known as the “Rainbows and Unicorns Quarry.” Titus said that the name came up during a phone conversation between two of his colleagues.

“A former employee of mine … thought I was a little too enthusiastic about every fossil site I’d ever found.”

Titus said colleagues often jokingly accused him of claiming every site, including at Grand Staircase-Escalante National Monument, was “rainbows and unicorns all the time.”

However, in this case, Titus’ colleagues agreed the site at the monument really was as good as it seemed.

“And so the name just stuck out.’”

The researchers even brought a stuffed, rainbow-colored unicorn toy to the dig site as a mascot.

Secretary of the Interior Deb Haaland recently visited Grand-Staircase Escalante National Monument, where she visited with Titus and handled some of the fossil specimens. While no official action has been taken by the Biden administration to restore Utah’s national monuments to their pre-Trump sizes, the president frequently promised as much during his 2020 campaign.

The Rainbows and Unicorns site remains within the boundaries of the shrunken monument, but some conservationists fear that many such sites lie outside the current boundaries and may be vulnerable to exploitation or unwitting destruction.

A map showing the location of the dig site in Grand-Staircase Escalante National Monument | Illustration courtesy of the Paria River District of the Bureau of Land Management, St. George News 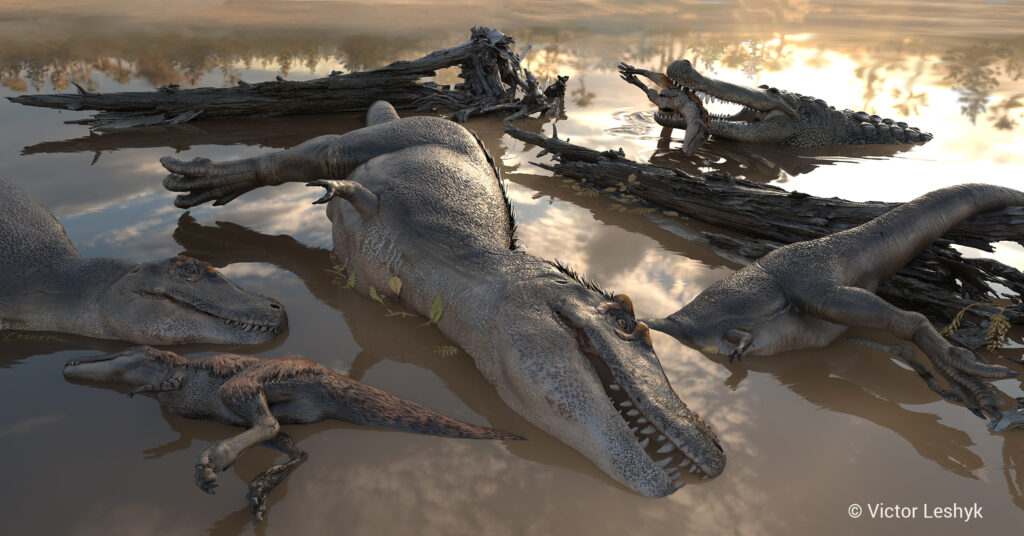 In this artist's rendering, bodies of dead Teratophoneus lie in the wetland region where they were likely killed by a flood. A Deinosuchus feeds on one carcass in the top right | Illustration by Victor O. Leshyk, St. George News 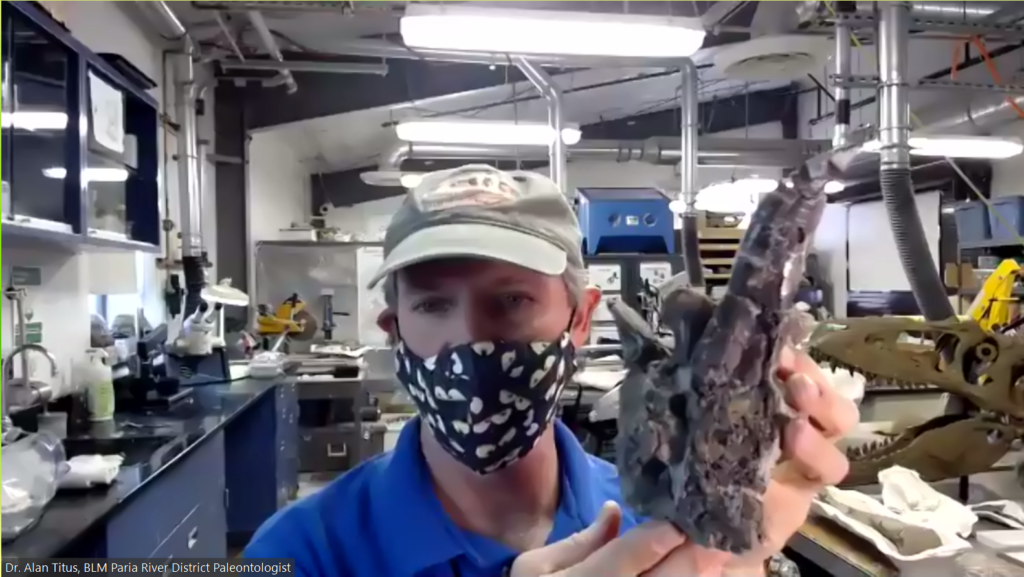 Dr. Alan Titus shows off a fossilized tooth from one of the adult Teratophoneus specimens, April 19, 2021 | Screenshot image courtesy of Paria River District of the Bureau of Land Management via Zoom, St. George News 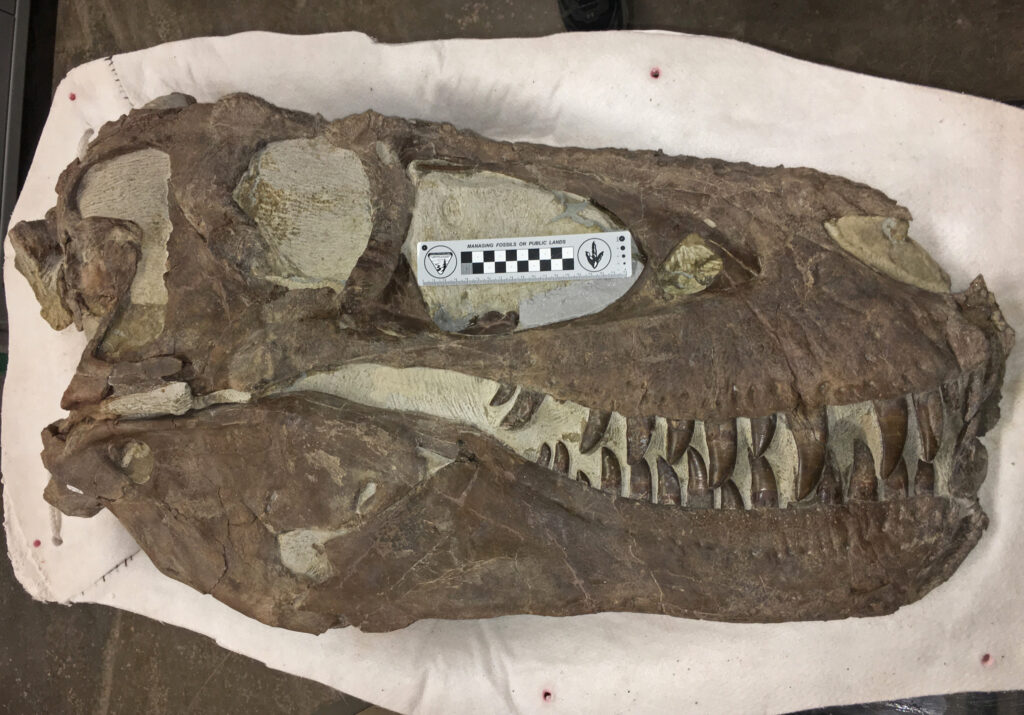 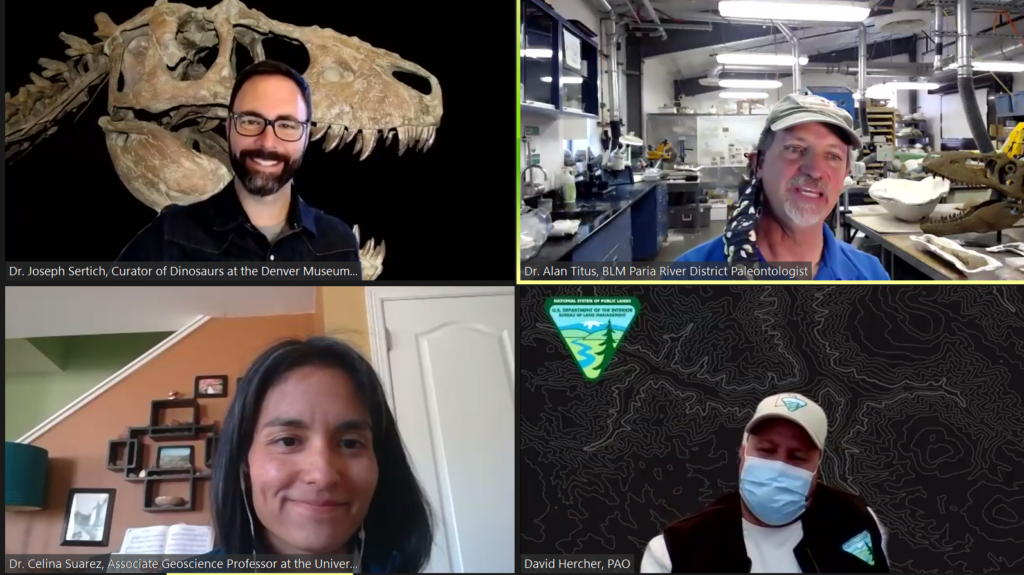 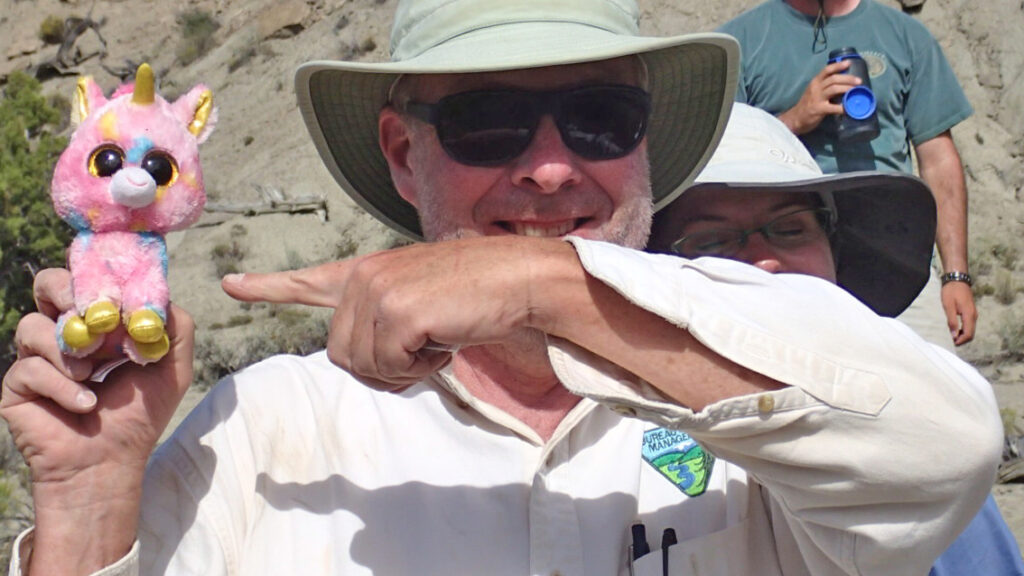 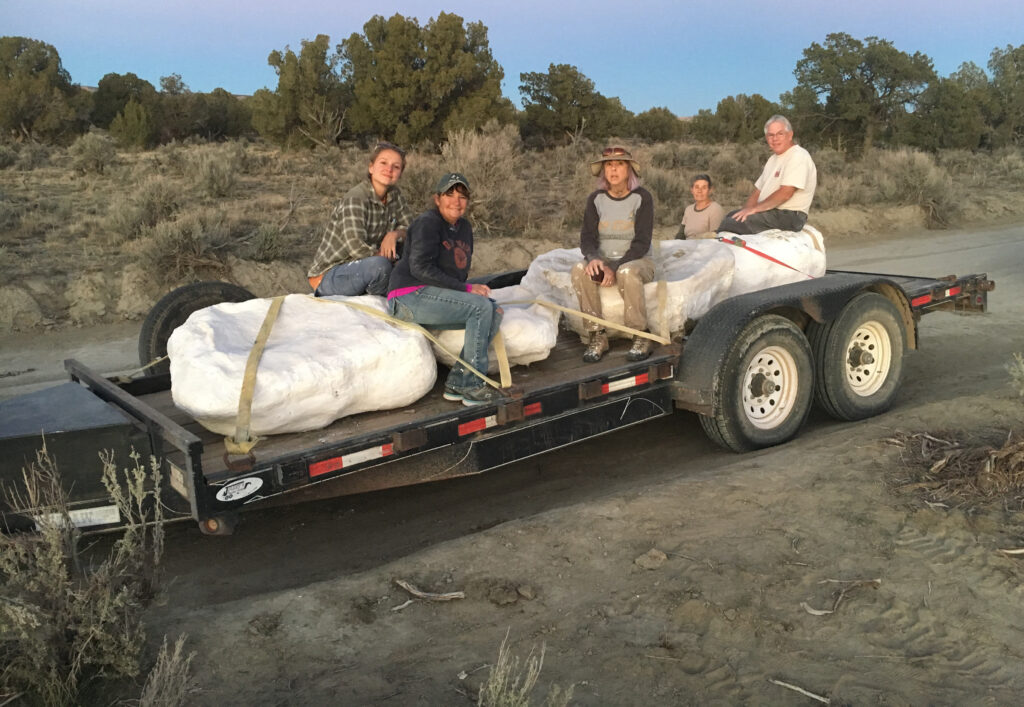 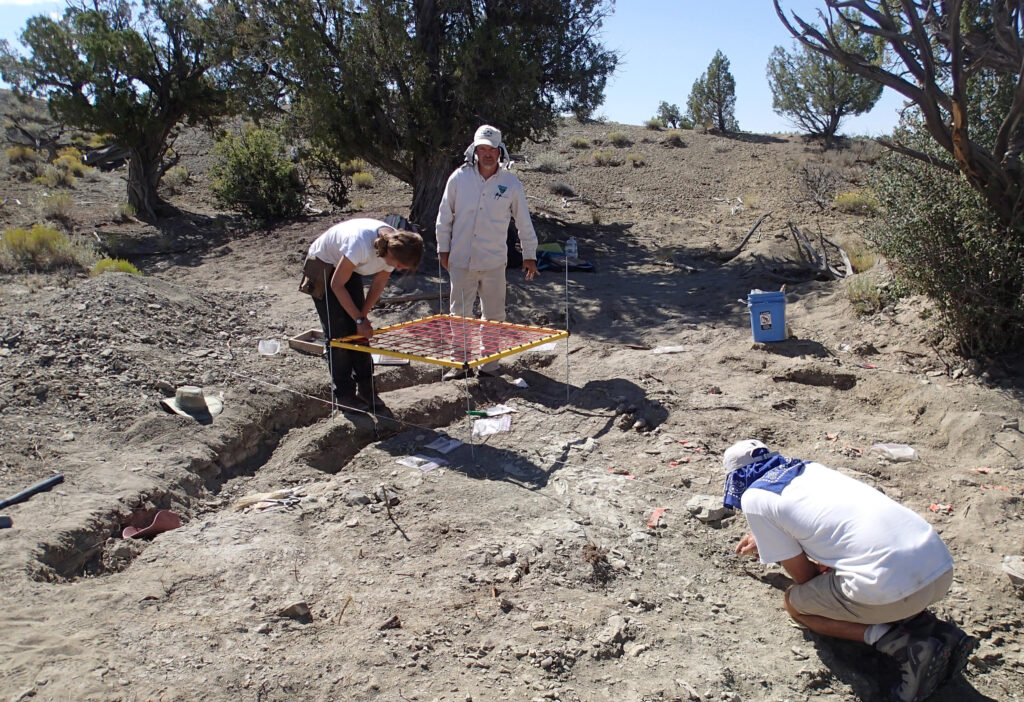 Dr. Alan Titus , the BLM paleontologist who made the discovery of the fossil trove is pictured here (center) working alongside other researchers at the site, Grand Staircase-Escalante National Monument, Utah, July 29, 2014 | Courtesy of Alan Titus, St. George News