ST. GEORGE — As invasive species go, cheatgrass doesn’t seem as threatening as Burmese pythons in Florida or feral hogs in Texas. But what cheatgrass lacks in notoriety, it more than makes up for in numbers.

Cheatgrass is a mere nuisance when it overruns a garden, catches in clothing or becomes embedded in a pet’s paws, but on a national level, cheatgrass has been identified by the USDA as the worst range weed, one that has consistently overrun native plant species while reducing wheat harvests.

Worst of all, cheatgrass vastly accelerates the fire cycle for Utah’s grasslands, threatening long-term species like sagebrush and juniper trees. Corey Ransom, associate professor of weed science at Utah State University, told St. George News that the natural frequency of significant wildfires jumps from one every 30-plus years to one every three to five years, and the presence of cheatgrass is part of the problem.

“Every three to five years, we just have these catastrophic fires,” Ransom said. “We have reductions in habitat for endangered species, including the desert tortoise. You basically remove (native) perennial bunch grasses from the system, and it’s not just perennial grasses, but it’s all the species that you would find in those different environments.”

Cheatgrass – or Bromus tectorum – is a winter annual grass native to Europe, Southwestern Asia and Northern Africa. After being transported across the Atlantic in the 1800s, cheatgrass found an ecological niche in the grasslands of the United States, particularly the Intermountain West.

It spread slowly at first, especially where established plant communities had deep roots and adequate precipitation. However, when livestock were allowed to overgraze or the land was cleared by fire, cheatgrass would quickly overtake the site, preventing native species from returning.

Ransom said invasive annual grasses absorb nutrients in the soil and precipitation long before the native perennial grasses can germinate and grow. He compared the competition to eating dinner as part of a large family.

“I grew up with six siblings, and I was the youngest,” Ransom said. “It’s not like I couldn’t compete at the table with my siblings, but if my siblings get to the table first, it’ll all be gone before I wake up from my nap. It’s the same with a lot of these native species. Their life cycle is different, so they’re not able to get resources.”

Efforts have been made to remove cheatgrass at every level, with local, state and federal agencies heavily invested in restoring healthy grasslands.

“When it comes to the fight against cheatgrass, prevention is the best solution,” said Christian Venhuizen, public affairs specialist for the Bureau of Land Management. “More cheatgrass equals more wildfire, and more wildfire can promote more cheatgrass. Overall, current practices proved effective when restoring and maintaining critical habitat; however, cheatgrass is a difficult invasive species to remove once it takes hold, and some areas remain a focus of rehabilitation.”

Venhuizen said that the BLM uses different methods depending on the site. Some of the most common methods for controlling invasive plant species are controlled burns, mechanical or manual removal and chemical treatments, such as herbicides.

While cheatgrass often returns relatively quickly after a burn or mechanical removal, there is growing evidence that herbicide treatment may be able to remove cheatgrass for several years. Ransom said that he and his team have been researching a new herbicide known as Rejuvra (generic name Indaziflam) since 2015 and that it was recently approved for rangeland use.

Ransom said that the benefit of Rejuvra is that it stays relatively close to the soil’s surface, where annual grasses like cheatgrass germinate, but leaves the deep-rooted perennial grasses unharmed. Nonetheless, the expense of herbicide treatment, coupled with its long-life span, means that removing cheatgrass has to be well planned and carefully executed.

You don’t want to go to the middle of the Great Basin where it’s been cheatgrass for 30 years and start there, because that’s going to be really expensive to try and bring it back. In fact, it may be too late to bring it back. The idea is you go to areas where the invasion is new or fairly new, where you still have existing perennial vegetation, and you use an herbicide like Rejuvra to knock back the annual grasses and allow the perennial vegetation to basically regain its strength. So you start on the fringes and then kind of like wildfire try to push back into the center of the invasion. And again, saving existing vegetation is always going to be cheaper than trying to restore vegetation once it’s gone from the site.

While residual herbicide activity often prevents reseeding, projects to restore native plants in the aftermath of fire or mechanical removal are common. In Southern Utah, an agency like the BLM would typically disperse seeds from an aircraft and then till them into the soil. Given enough rain, the seeds should germinate, with the hope that an established plant will be able to outcompete returning cheatgrass.

Craig Dremann is a California-based gardener who’s worked as a consultant on reseeding projects in Nevada, Arizona and California. He said variable conditions like rain, soil nutrients, competing plants and more make successful reseeding difficult but not impossible.

“Somebody puts together a plan: this seed, at this sowing rate, using this sowing method to produce plants right,” Dremann said. “Every species has its own recipe of sorts. The blue bunch wheatgrass needs a slightly different amount of pounds per acre than the Great Basin wild varieties or the squirrel tail.”

Dremann represents a faction of stakeholders that disagrees with some of the current practices used to combat cheatgrass. Specifically, Dremann said that the use of “exotic seeds” and seed mixes when reseeding will not prove effective and may be nothing more than a waste of effort and money.

However, Ransom and Venhuizen said that seed mixes, which may include some “improved” or “introduced” species, such as nonnative plant seeds that are more fire resistant or palatable for wildlife, remain the primary tool in reseeding and that there is little evidence to suggest that competition among plant species in seed mixes is a contributing factor in project failure.

So far, cheatgrass has outlasted best efforts to remove it. In a 75-year study of the Great Basin region, only 30% of reseeding projects were successful. Ransom said the overall success rate after four to five years may be as low as 20%.

Project success was strongly correlated with rainfall and soil moisture. With the West in the middle of a decades-long drought, the outlook for ongoing or future reseeding projects looks grim.

“While the costs can be significant, the cost to suppress a large wildfire frequently exceeds $1 million per day, only for suppression,” Venhuizen said. “That does not include the use of precious local water resources, damage to communities and infrastructure or rehabilitation of burned areas after a fire, let alone the immeasurable cost of human lives.”

Researchers, public agencies and private citizens agree that restoring rangeland and reducing destructive fires are worth the time and money required. While a consensus on methods has yet to be reached, it seems like cheatgrass is here to stay for the foreseeable future – at least until a solution is found that is cost effective, long lasting and considerate of changing environmental conditions. 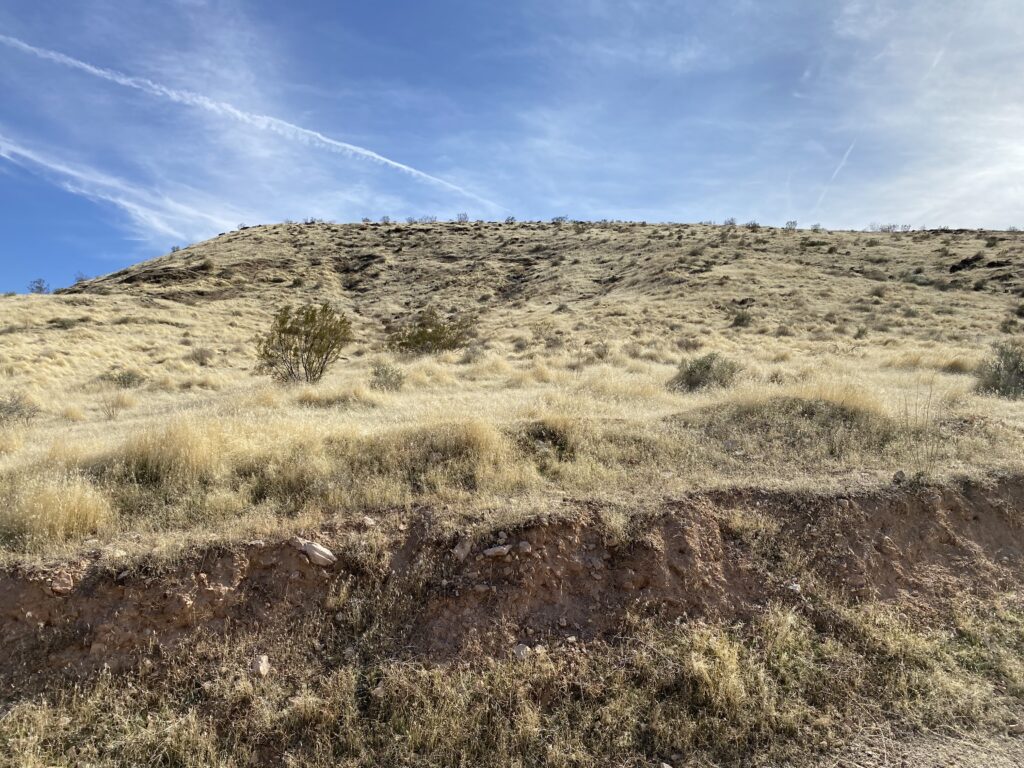 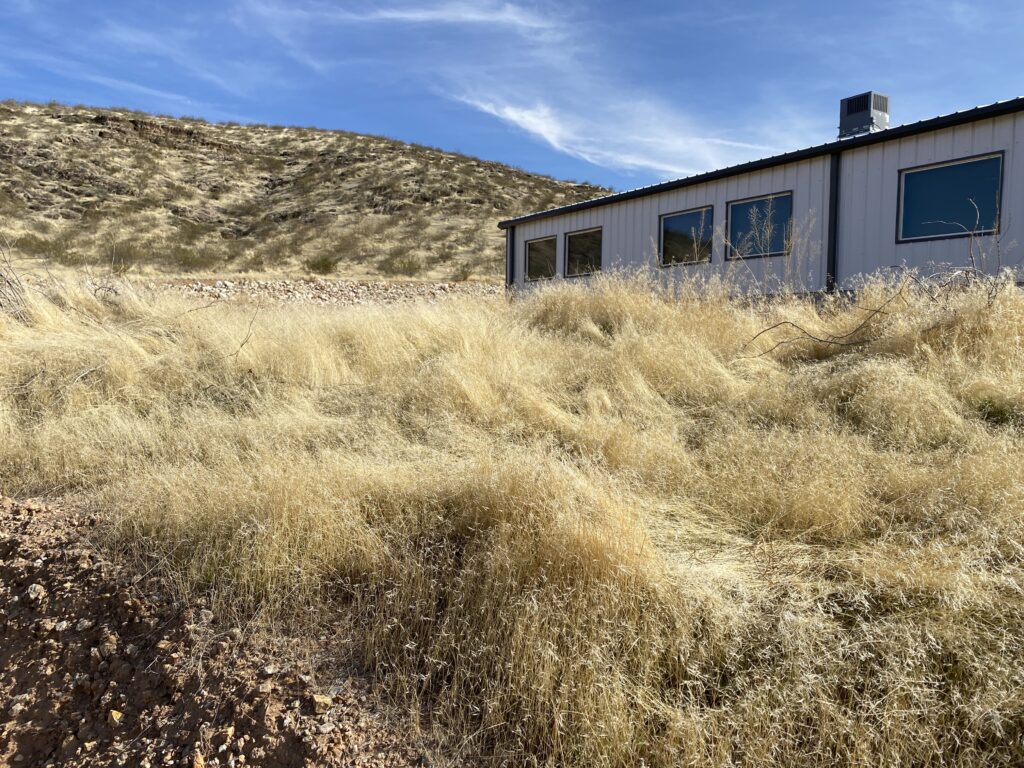 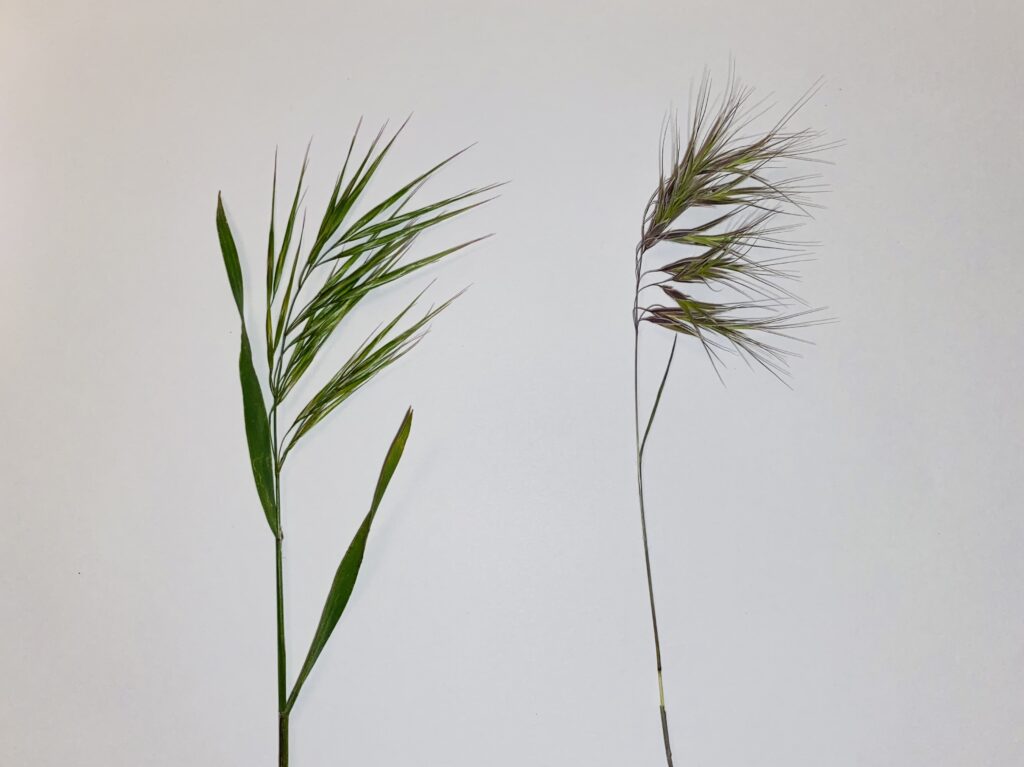 A close-up view of two stalks of cheatgrass. The cheatgrass stalks are green in the spring while still growing (left), and transition into a purple color as they dry out (right), St. George, Utah, March 28, 2021 | Photo by Ammon Teare, St. George News 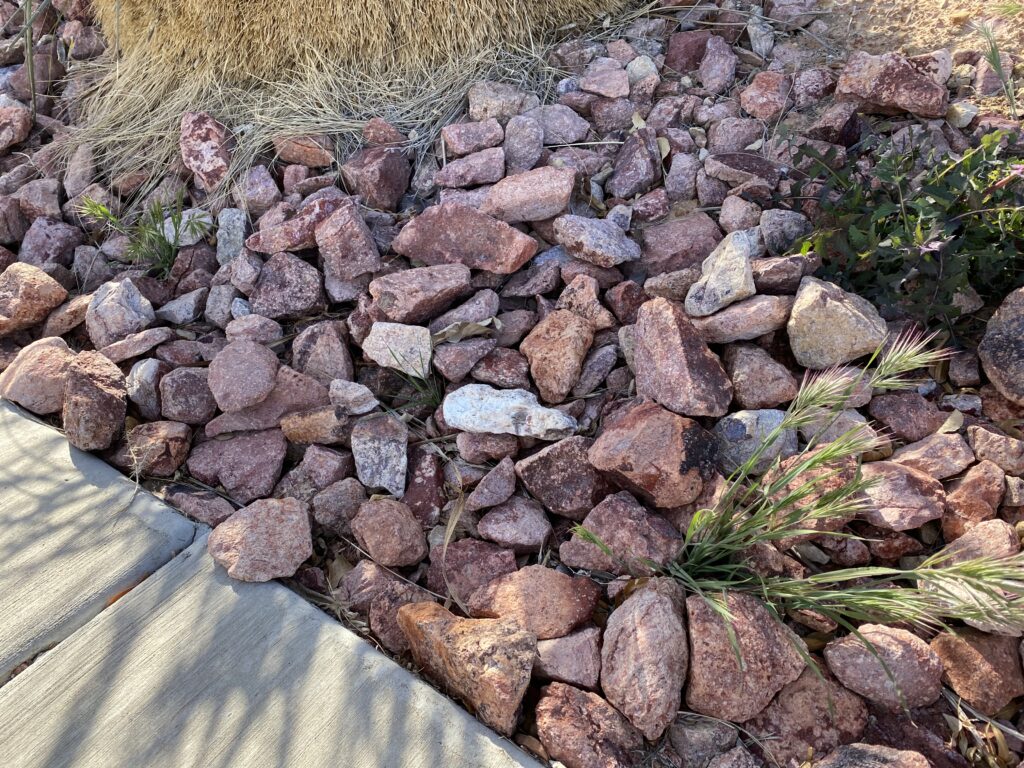 Cheatgrass can grow just about anywhere, including between the rocks of a xeriscape or in gardens, St. George, Utah, March 24, 2021 | Photo by Ammon Teare, St. George News 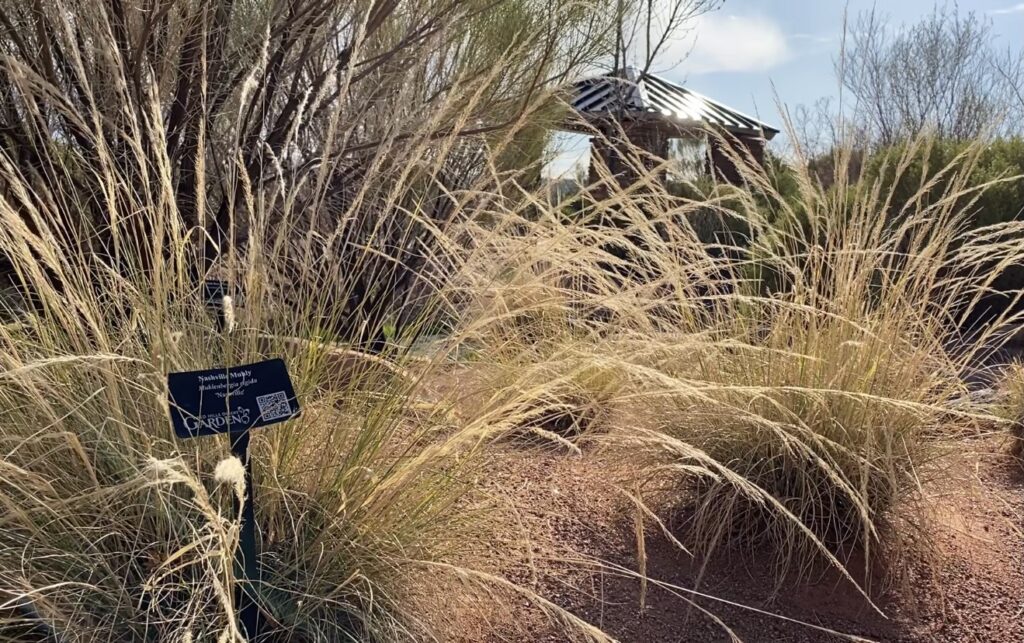 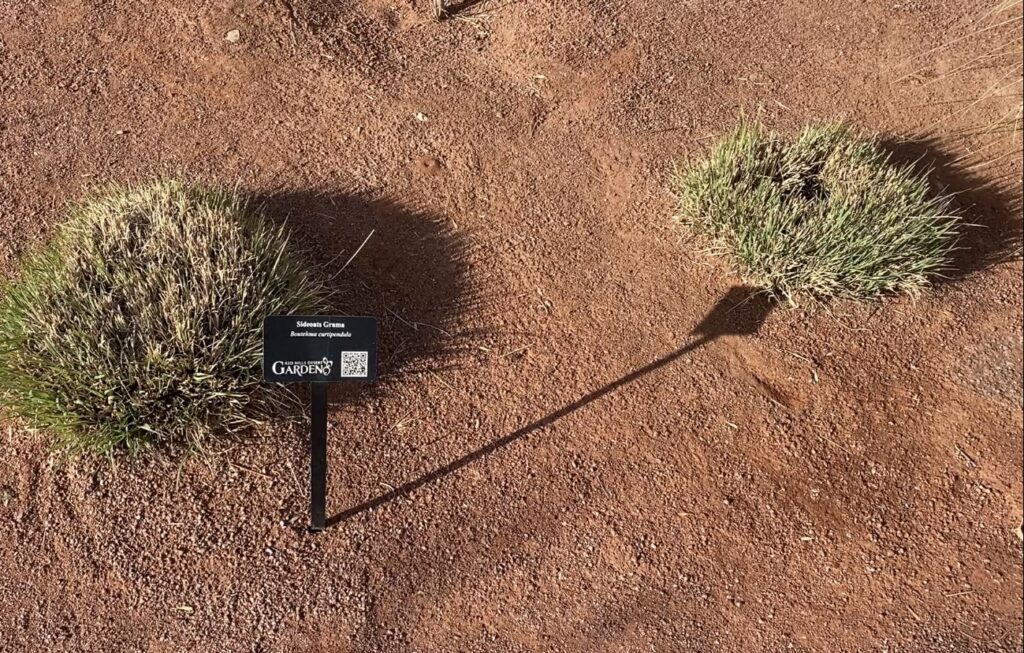