“A perfect marriage,” Utah Youth Soccer Association Region 6 Director Kyle Pasley told St. George News. “It just ended up being a perfect marriage for what they needed, what we needed and it’s a good win for everybody.”

After four years of deliberations, conversations and investigations, the Utah Youth Soccer Association and the Shivwits Band of Paiutes signed a 25-year lease agreement and broke ground for the development of a four-field soccer complex on the Shivwits’ reservation on Thursday called The Legacy Fields Soccer Complex at Shivwits. The complex will be located on the lot adjacent to the Shivwits Convenience Store along Old Highway 91, surrounded by the red mountains and desert vistas.

According to the Utah Youth Soccer Association, the 19-acre complex could host more than 1,800 matches and nine association-sanctioned tournaments a year. There will be potential for adding a fifth field in the future.

The complex achieves goals of both groups: the Utah Youth Soccer Association gets a state-of-the-art facility in an ever-emerging youth soccer market and the Shivwits Band takes a significant step forward in its economic development plan with an emphasis on youth development.

Shivwits chairperson Carmen Clark said there is nothing else like the complex on the reservation.

“Moving forward, we’re going to have a lot more projects in the future but we’re starting out big with the soccer field,” Clark said. “Our children are our future. They are our treasure. We want to keep them on the straight and narrow and we have projects like this where they can belong to. It helps them keep their path in life straight instead of wandering.”

For the Utah Youth Soccer Association, it creates a foothold in an expanding market and an optimal location for competitive and recreational soccer. There are more than 3,300 youth soccer players in the St. George area.

Pasley said the cities in Washington County have done their best to keep up with rapid growth but are still failing to provide enough supply for the demand.

One local club director said they had to turn away more than 100 teams for a tournament they recently hosted. 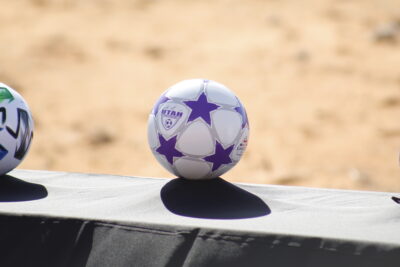 Four additional fields on a new facility alleviates some of that scramble for a place to play and opens up more places for kids to play locally. The new complex also gives the Utah Youth Soccer Association a footprint in Southern Utah, the location and geography of which has made it a hub for many club sports with interstate pull.

“We’re the first place you can play year-round coming from out of the intermountain west. You don’t have to go south to Nevada, Arizona, California,” Pasley said. “This really can become a crossroads of the west for competitive and recreation soccer …. We’re building a reputation now for being a soccer mecca.”

It is the first facility to be built by the Utah Youth Soccer Association’s Legacy Fields Project, an initiative it launched to create more soccer fields to address increasing demand.

The lease agreement gives the Association’s Region 6 priority usage during the spring and fall during peak club seasons and “to utilize the complex for tournaments and other programming,” according to a press release. The Shivwits Band will also have access to the complex for its own functions. Both parties will split revenue generated from rental fees.

Pasley said the organization considered locations for a complex as far away as Cedar City but ultimately decided on the Shivwits plot due to location and other factors.

The hope is matches can start being played next spring.

“This is probably where Utah Youth Soccer is going to plant our flag for the foreseeable future,” Pasley said.

Rich joined St. George News in October 2020. The Colorado native graduated from Metropolitan State University of Denver in December 2018, where he was a sports and managing editor at the student publication, The Metropolitan. He worked as a media relations assistant for the minor league baseball club New Orleans Baby Cakes in 2019.

‘It should have a Paiute name’: Shivwits chime in on state bill proposing name changes of landmarks