Leading the way for Desert Hills was Morgan “Mo” Behymer, who swept her opponent 6-0, 6-0 to capture the win in No. 1 singles. The Thunder also won their No. 2 and No. 3 singles matches in straight sets, with Mackenzie Telford winning the former 6-0, 6-1 and Tia Turley winning the latter, 6-1, 6-1.

The doubles matches proved to be more challenging for the Thunder, as the Panthers had stacked their top four players in their two doubles teams to try to gain points.

After dropping the first set 4-6 against Brielle Callahan and Cameron Miner, Desert Hills’ No. 1 doubles duo of Faith Hess and Cassie Kohler found their stride and won the next two sets 6-1, 6-2, thereby keeping their undefeated streak alive over the last two seasons of region play.

In No. 2 doubles, Pine View picked up its lone win of the day, as Olivia Obray and Katrina Hafen prevailed over Callie Kohler and Anjolie Cummins of Desert Hills in straight sets, 6-3, 6-3.

“Those were two great doubles matches, for sure,” coach Smith said. “Without question, we just saw the four best doubles teams in the state compete against each other.”

Brielle Callahan, a captain for Pine View, lost in the first doubles match but mentioned how nice it was to see some of her teammates take down their top competitor.

“I played first doubles, and our second doubles beat Desert Hills,” Callahan said. “Me and my partner won the first set and lost the next two, so we were really close to beating them, too. Desert Hills has always been our hardest competitor, so it was really cool to see how some of my teammates could actually beat them.”

Prior to their final home match on Sept. 19, Desert Hills’ 11 seniors were recognized.

Despite losing 15 players to the new Crimson Cliffs High School, the Desert Hills squad currently numbers 35 athletes, making them still one of the largest teams in the state.

“Compared to the prior three years, when our team size averaged 50 players, this was a shift for us,” Smith said. “I’m so excited for our future. We have the best freshmen class in terms of depth and playing experience we’ve had since my first year here four years ago.”

Next up for the Region 9 tennis players is the region tournament, scheduled for Sept. 27-28 at the Tonaquint Tennis Center in St. George. The state tournament is scheduled for the following week, on Oct. 4-5 at Salt Lake City’s Liberty Park.

Smith said the Thunder’s main goal this year is to bring home the state title. Last year, Desert Hills tied for second place at state, finishing just one point behind 4A champion Ridgeline.

“We set out four years ago to win the Utah state championships within four years,” Smith said. “The girls were disappointed in their runner-up finish last year, being certainly one of the favorites. It galvanized the team to make their presence known and to take the gold trophy home this year.”

For Pine View, their strength has been in doubles, as Callahan and Miner are the No. 2 team in first doubles and their second doubles team, Olivia Obray and Katrina Hafen, is first in the region.

“Now that we play for individual spots in region, I think that me and my partner (Cameron Miner) could probably beat Desert Hills, and I think that Dixie is also going to be a really hard competitor as well,” Callahan said. “I’m not exactly sure if Desert Hills will get No. 1 in all of them at region.”

Callahan spoke to how the Panthers’ season went.

“I feel like we’ve been doing really good as a team,” Callahan said. “Most of our Varsity is seniors, so it’s just really cool to see how everyone is working really hard this year because it’s our last year. We want to end it really well.”

Beating Desert Hills will be a tall task, but Callahan said that’s the goal for Pine View’s doubles, with the goal for their singles being a state tournament birth.

“My goal for me and my partner is to win region, but it’ll be really hard to beat Desert Hills,” Callahan said. “If we work really hard, we can still win at region. Our singles goal is to try and get to state.”

Pine View will be one to watch at the region tournament, as they have some of the best doubles teams in the state.

Meanwhile, other coaches in the region said their teams also saw success this season, despite not having the stellar winning record of a team like Desert Hills.

“It’s been a good season,” Fuller said as the Lady Falcons wrapped up their home match against Snow Canyon on Tuesday.  “We have a lot of girls that have never played before, but we’ve been seeing progress. They’re having fun, they’re improving, and that’s all you can really hope for.”

Also on Tuesday, Cedar lost at home to Dixie, 4-1. Cedar’s No. 2 doubles team of Remi Nash and Brynlee Hess pilled out a 6-2, 5-7, 6-2 win for the Lady Reds’ only win of the day. Cedar head coach Madi Wallace also shared a few of her thoughts on the season.

“We’re a team currently in the middle of developing a program, and I think that our season has reflected growth, which I’ve been excited to see,” Wallace said. “I’m excited for the region tournament, as I believe we have players with the potential to compete.”

Following are each school’s qualifiers for the region tournament, which starts at 8 a.m. Friday at Tonaquint Tennis Center. The top six finishers in each bracket will qualify for the state tournament. Listed after each competitor’s name and school is the number of region wins they had during the regular season; exact region tournament bracket seedings are still to be determined. 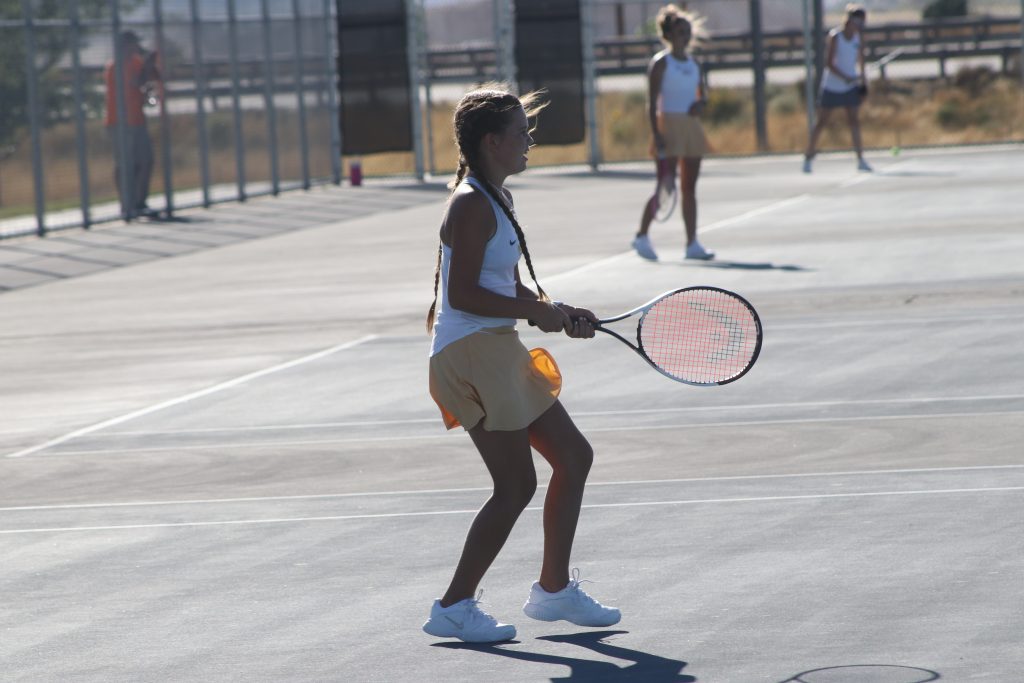 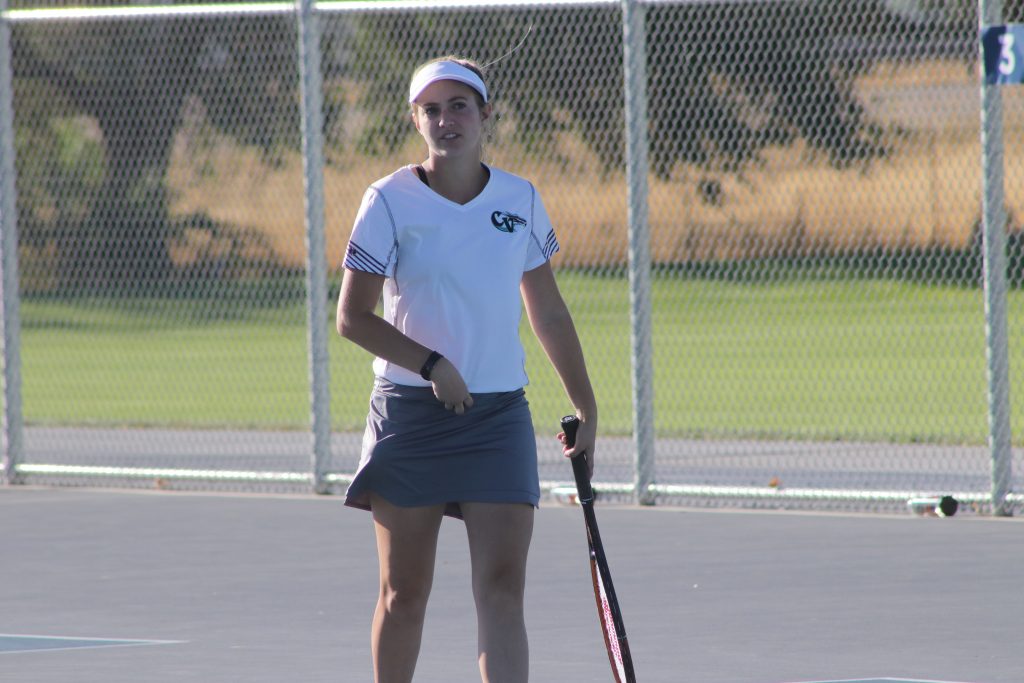 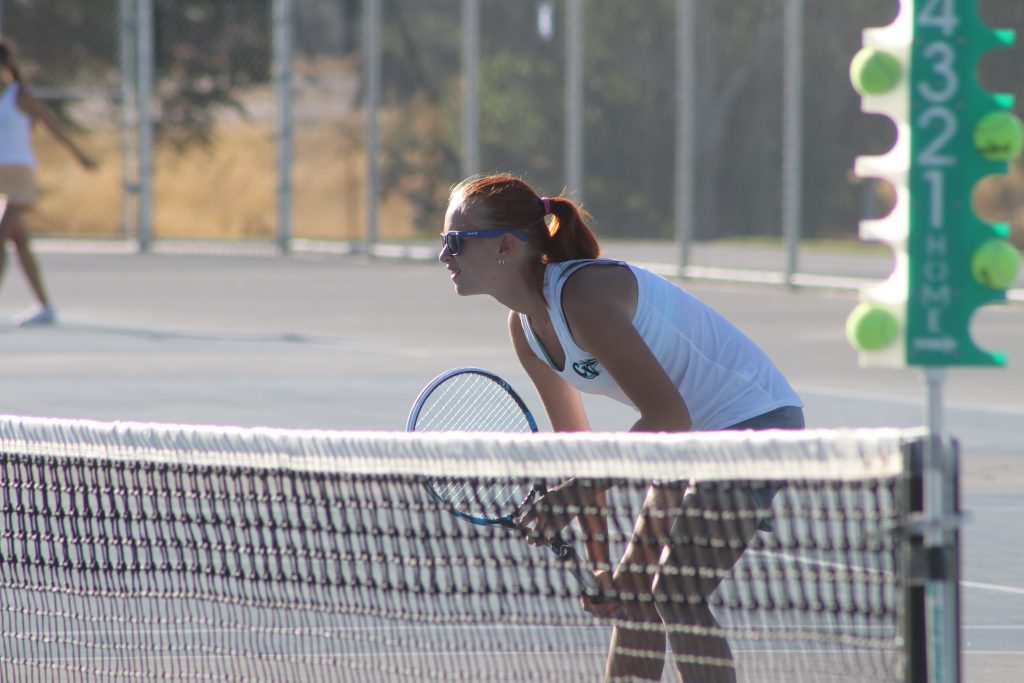 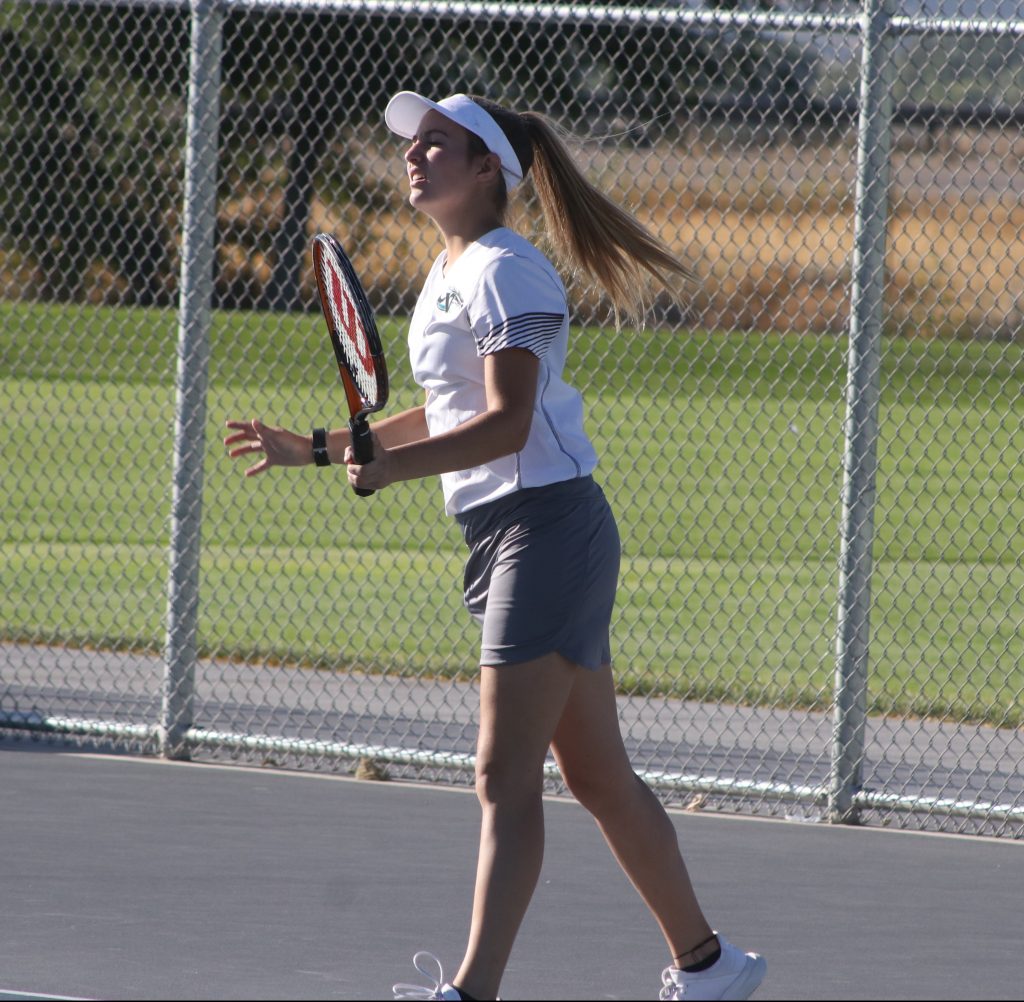 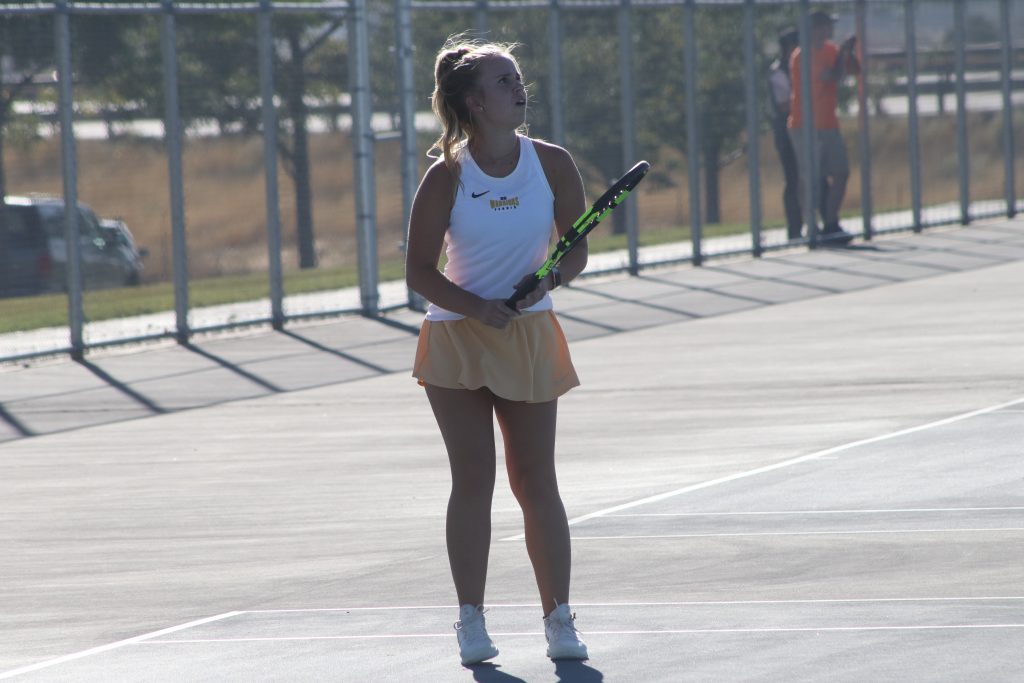 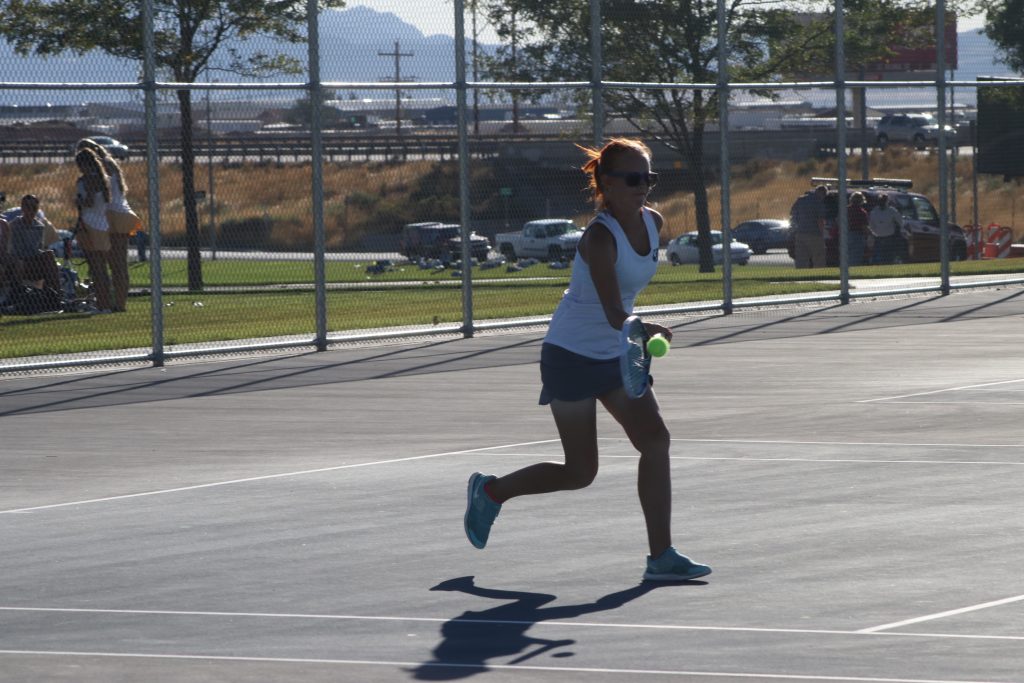 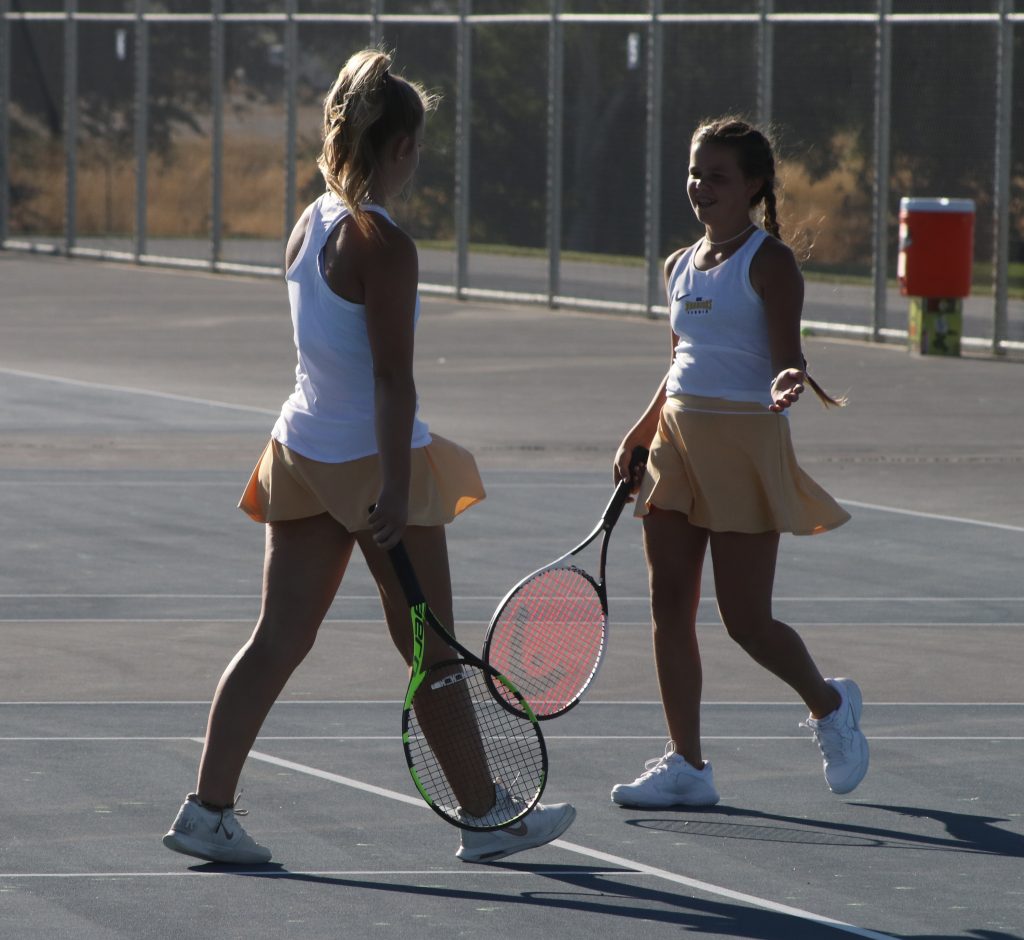 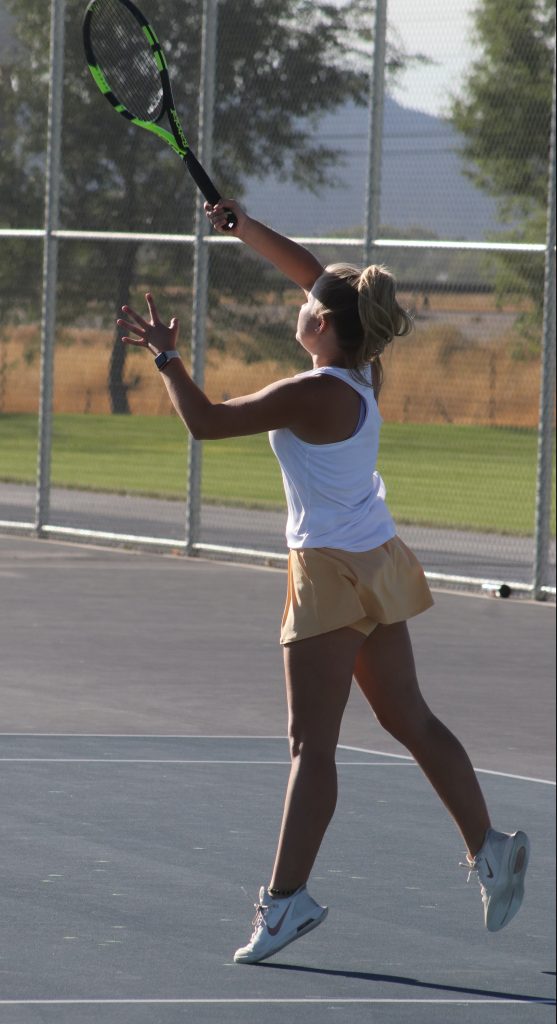