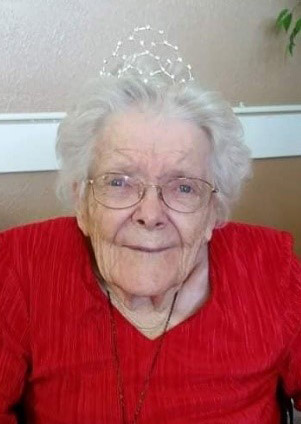 Josephine Robison Walsh passed away peacefully at the age of 103 on May 1, 2019, at her residence at Hurricane Health and Rehabilitation in Hurricane, Utah, where she had lived for the past 11 1/2 years. She was born in Overton, Nevada, April 25, 1916, to Joseph Hancock and Nellie Hinckley Robison. She was the youngest of eight children, all of whom preceded her in death. She was raised on the family farm in Logandale and graduated from Moapa Valley High School in 1934.

In 1937 she was living with her sister, Rose, in Southern California where she became reacquainted with a childhood neighbor from Logandale, Charles Walsh. A romance blossomed and on Dec. 12, 1939, they were married in the St. George Temple.

They settled in California where their first two children were born: Susannah in 1941 and Daniel in 1944. In 1946 they returned to Logandale where Charles built the home that they lived in for the next 30 years. Two more children joined the family there: Wandanell in 1950 and Jack (John Joseph) in 1958. They were both born in the small hospital in Overton.

She and Charles were dedicated to each other, to their family, to the Lord and to helping those around them. In addition to their own children, they helped raise other children who lived with them. Josephine served in the church in Relief Society, Primary and as a Cub Scout leader.

With their family and later as a couple, they loved to explore the deserts and mountains of Nevada, Utah and the surrounding areas. Not only did they share a love of nature, but they also shared a great sense of humor.

She and others attributed her long life to chocolate – not the dark chocolate that is supposed to have so many health benefits, but milk chocolate. Everyone that visited her in her later years knew that she had a nightstand drawer dedicated to Hershey’s Kisses and other delectables.

Arrangements entrusted to the care of Metcalf Hurricane Valley Mortuary, 435-635-9922.

In lieu of flowers, please buy some Hershey’s Kisses for yourself and your family.