LAVERKIN — Facing the highest crime rate among Washington County municipalities, LaVerkin Police Chief Ben Lee has proposed a plan that would add five officers to his department by 2019, nearly doubling its annual budget.

Lee made a presentation at the LaVerkin City Council meeting Wednesday evening to discuss the issue of public safety in the community.

“I hope to provide the scope of our current law enforcement situation, the problems we face and solutions that will move LaVerkin city to a greater future,” Lee said.

LaVerkin is served by three officers – Lee, Sgt. Amber Crouse and Officer Mark Hendry – along with four part-time officers who each work an average of 12 hours per week.

The department’s budget does not allow for support staff, but volunteers support the department by working about 30 hours per week, in addition to assistance provided by the Washington County Sheriff’s Office.

Lee said there has been inadequate police coverage in LaVerkin since he arrived to fill the police chief’s position more than three years ago. He noted that many police departments and government offices are experiencing similar shortages.

Additionally, the police department doesn’t offer a competitive wage when compared to other cities within the county, he said, which can limit the pool of candidates who are willing to work for a wage lower than what they could earn in a city nearby.

In the event of a significant incident, such as a shooting or even an injury crash that involves numerous cars and multiple injuries, LaVerkin is understaffed as it is and would have limited resources to respond to something like that, he said.

“Public safety is not cheap,” Lee said, “it’s probably one of the most expensive, cost-prohibitive issues that the city has to deal with.”

The plan calls for:

That would allow for 24-hour coverage as well, he said.

LaVerkin has a crime rate of 2.7 percent, the highest in Washington County, according to the Crime Index Rate, which tracks the number of crimes reported compared to the number of people living in the area.

Additionally, the number of calls each officer responds to is higher. A LaVerkin officer responded to more than 540 calls in 2016, compared to Washington City, which is second at 356 calls per officer. At the other end of the spectrum is Springdale, staffed with eight full-time officers who handled 940 calls total, which is 87 calls for each officer.

LaVerkin also has the highest number of crimes committed in relation to the population, with nearly 2.5 percent, compared to St. George with just over 1.8 percent.

Statistics show that having fewer officers puts public safety at risk because of the blocks of time with no police coverage, in addition to a delay in response times that can grow longer if the number of calls continues to increase.

Lee went on to say that the lack of police presence draws individuals with unsavory motives to the area under the belief they can engage in criminal activity without getting caught, which is made worse since LaVerkin does not provide 24/7 coverage.

Brooksby and Lt. Brock Bentley, also from the Washington County Sheriff’s Office, attended the council meeting to support Lee’s efforts and to confirm to the council that the crime statistics were accurate.

“We have the utmost respect for Chief Lee, have worked very closely with LaVerkin and have a good relationship with that department and their efforts,” Bentley, a 16-year veteran of the sheriff’s office, said, “and what the chief presented in terms of call numbers is what we are seeing as well, so they are real.”

Bentley went on to say that the Washington County Sheriff’s Office by law must respond to any call within the county if local law enforcement isn’t able to do so. The law was designed to protect everyone living within the county.

If LaVerkin cannot respond or needs backup, or if calls come during a period when there are no officers on duty, then deputies will respond. In 2016, the county responded to nearly 40 percent of the 1,600 calls requesting police assistance in LaVerkin, and the numbers so far this year are similar.

Bentley said that crime doesn’t decrease for no reason, but that there is generally a cause and effect that brings the numbers down, including taking a proactive position.

Police agencies that are insufficiently staffed must take a reactive position to criminal activity, and respond to incidents that have already occurred but does little to deter criminal activity. Being proactive deters crime through a stronger police presence, investigations and other measures that improve public safety.

“We can’t say we stopped this crime or that crime because those crimes didn’t happen, so they never become a statistic that can be counted,” Bentley said, “but that doesn’t change the fact that the more coverage you have, the more opportunities you have for enforcement.”

City council members said there aren’t funds available in the town’s budget to allow for an increase in law enforcement spending, at least not without a tax increase.

“We need to come up with a solution that doesn’t raise taxes, Councilman Randy Reeve said.

Councilman Micah Gubler said that the crime rate may not be reduced, even with additional officers, and the increase in funding may not render the desired result.

City Council agreed that additional officers are needed, but said that is only one area that is experiencing staffing deficiencies in LaVerkin.

They opted to look at the options available to increase the number of officers without a tax hike, including obtaining pricing and other information from nearby departments in the county, and to conduct a cost-feasibility study to determine if its possible to implement Lee’s three-year plan. 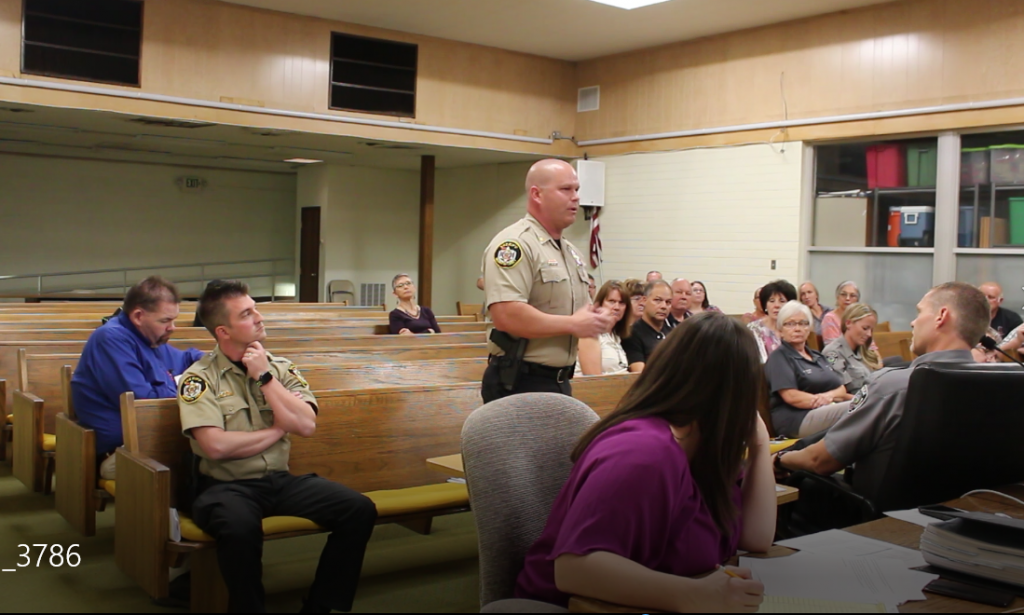 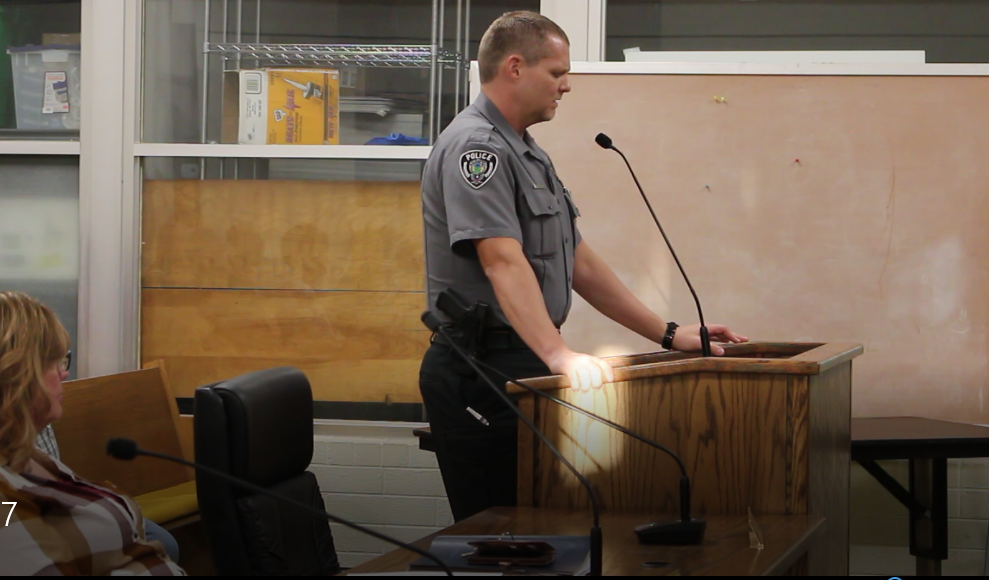 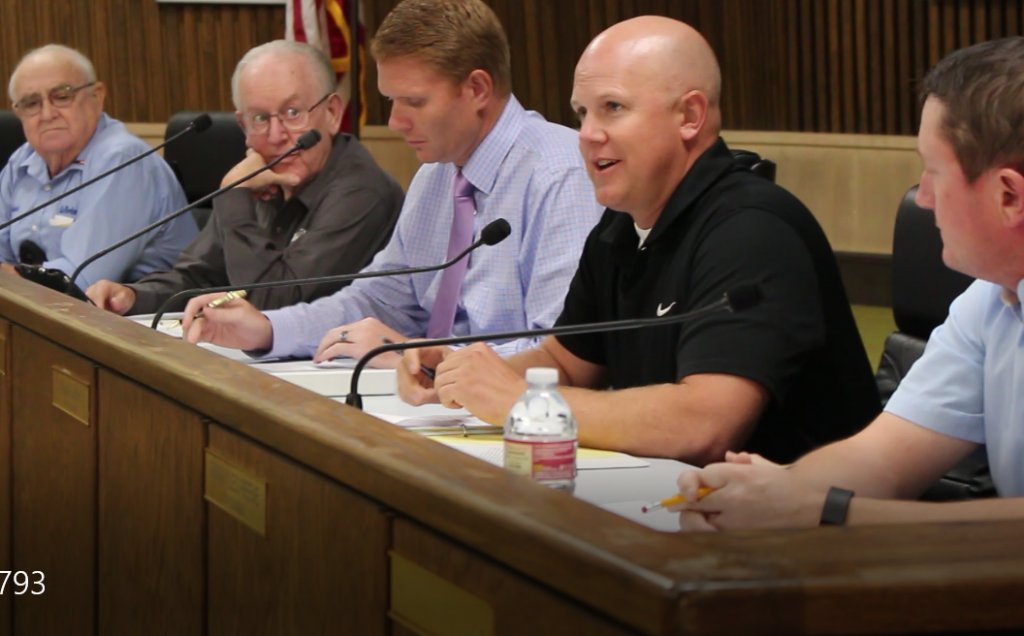 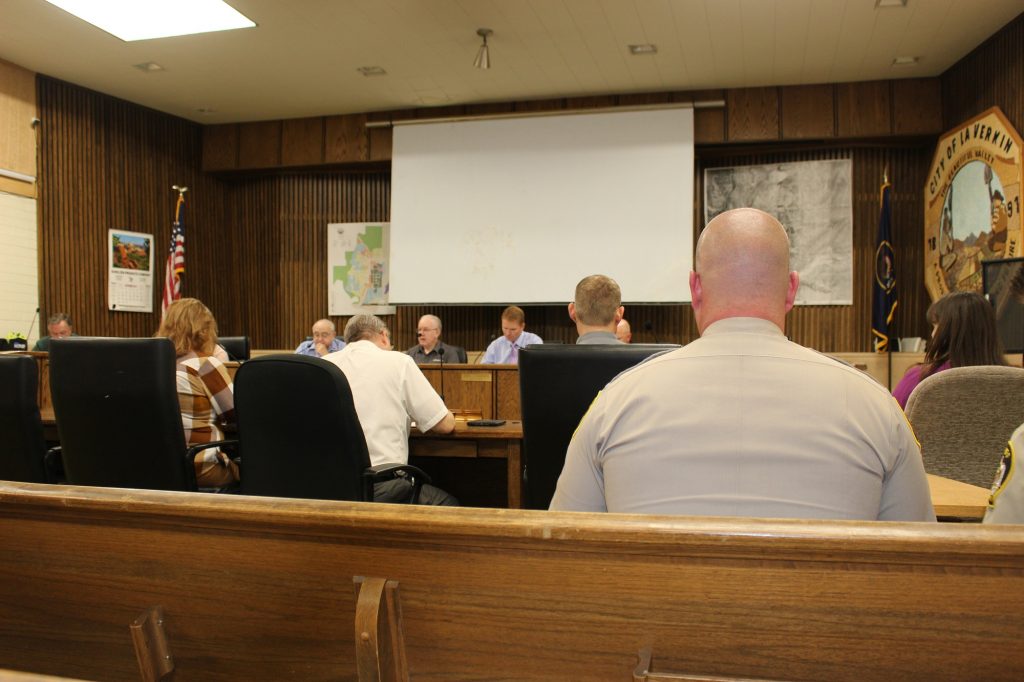 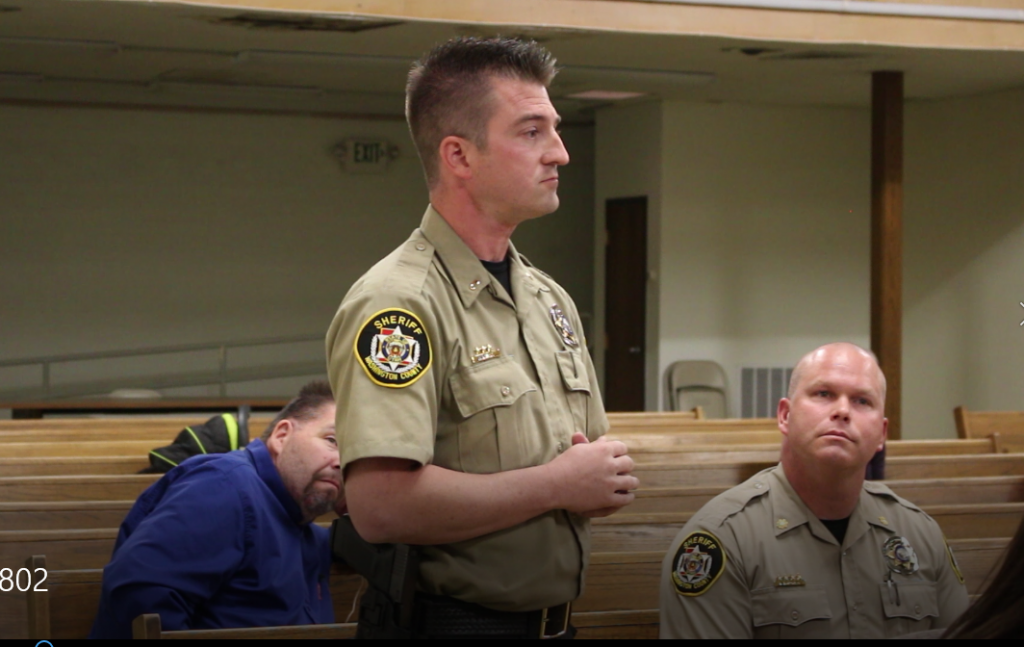 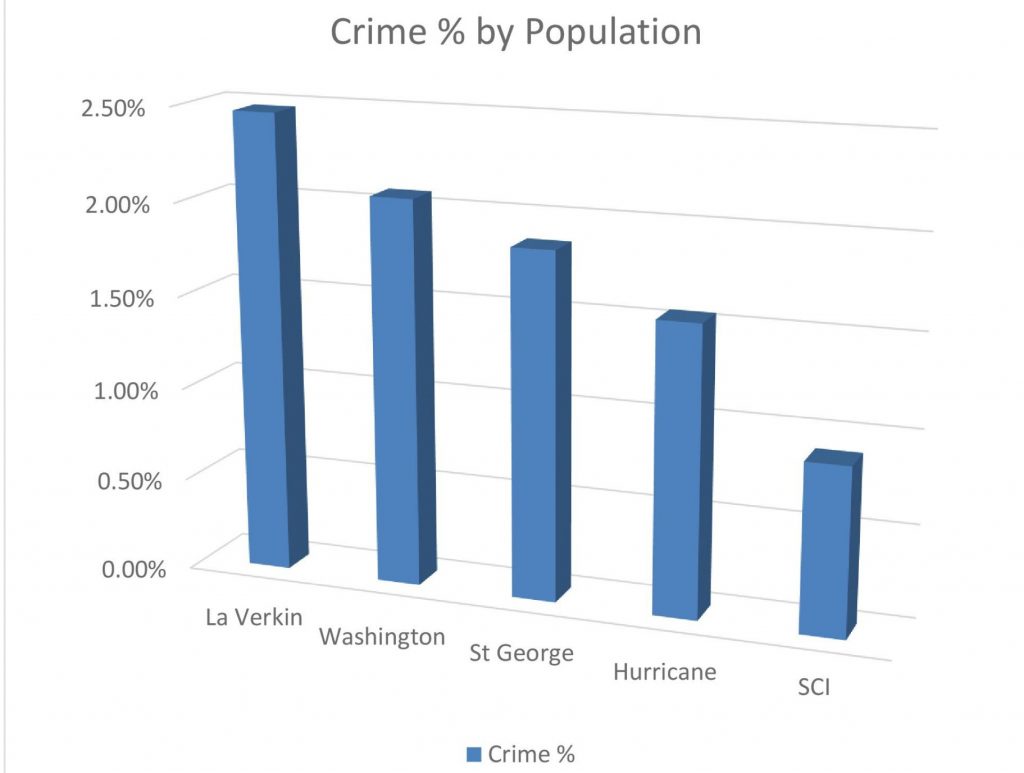 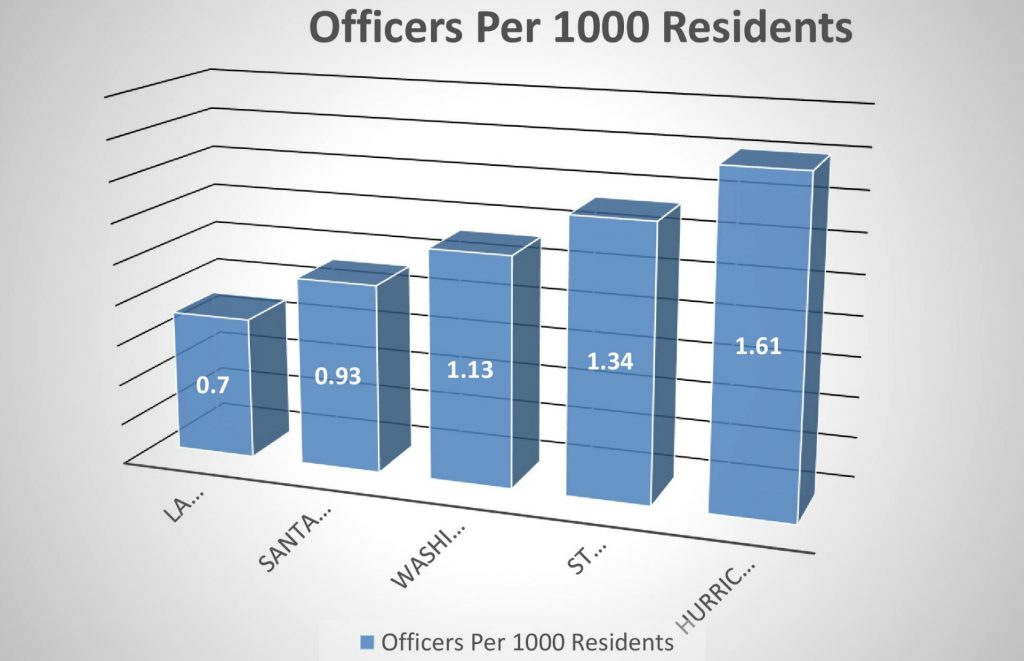 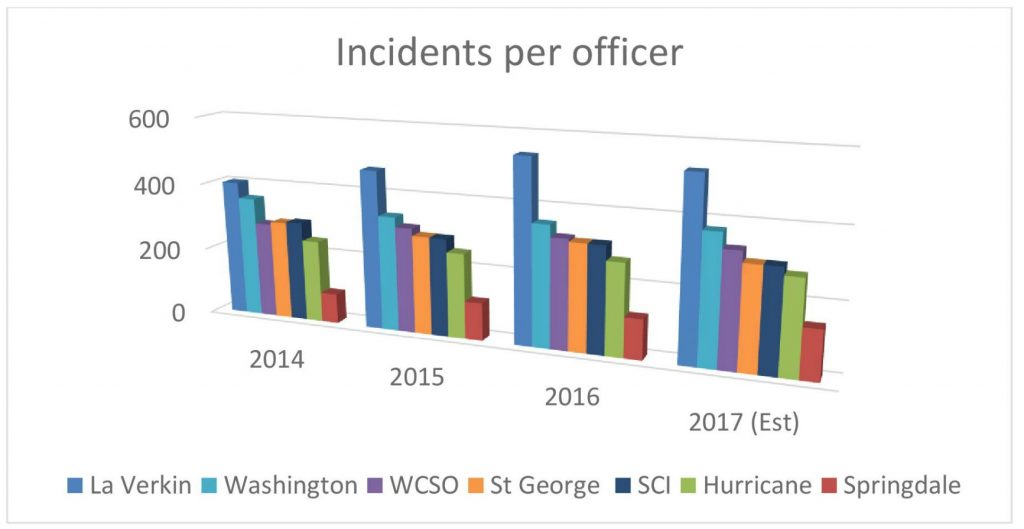