Ranger Scott Lowrey of the BLM St. George Field Office is a part of a group of BLM volunteers who traveled to to the East Coast to render in hurricane recovery, and have since been sent to Puerto Rico to help with the pending aftermath of Hurricane Maria, San Juan, Puerto Rico, Sept. 19, 2017 | Photo courtesy of the Bureau of Land Management, St. George News

ST. GEORGE – Already headed to the East Coast to aid with recovery efforts in the wake of Hurricane Irma, a Bureau of Land Management ranger from St. George has found himself in Puerto Rico in front of Hurricane Maria.

Ranger Scott Lowrey, of the BLM’s St. George Field Office, had been on the island only a few hours when he spoke via a conference call Tuesday afternoon.

“Within the last couple of hours, it went from being a sunny, beach-weather sort of day for the people that have come to visit to having some really threatening weather,” Lowrey said.

Hurricane Maria’s maximum sustained winds have increased to 175 mph. It has been ranked a Category 5 hurricane.

As of 5 p.m. MDT, the National Hurricane Center in Miami said an Air Force Reserve hurricane hunter plane took the reading Tuesday evening  as the storm was about 70 miles  southeast of St. Croix.

Maria is moving west-northwest at 10 mph and is expected to pass near the U.S. Virgin Islands Tuesday night and hit Puerto Rico Wednesday.

Lowrey, along with other BLM rangers and special agents, who also double as law enforcement officers, answered a call to volunteer to provide security and assistance in the aftermath of Hurricane Irma. However, he said, by the time they arrived on the East Coast, many of the assignments they would have helped with had been completed.

“Coming out here and looking like we’re going to go home, and then being told we’re actually going to be in front of a hurricane instead of coming in after it, that’s definitely eye-opening.”

Puerto Rico Gov. Ricardo Rosselló told The Associated Press the storm could be historic and devastating.

“This is going to impact all of Puerto Rico with a force and violence that we haven’t seen for several generations,” the governor said. “We’re going to lose a lot of infrastructure in Puerto Rico. We’re going to have to rebuild.”

While there “definitely is a sense of urgency” as the storm approaches, Lowrey said, people he’s seen are also taking it in stride. Many have boarded up their homes and businesses while others have left. Others are outside watching the incoming storm like tourists.

He’s never seen the scale of emergency preparation taking place as he has on the island, Lowrey said.

“There’s really nothing comparable in Southern Utah for what these people are going through,” he said.

Lowrey admitted to being a bit apprehensive about what lies ahead, but said, “Nervousness is not going to keep me from doing the job I need to do.

“When you see this outside of your window it’s awe-inspiring really. It’s humbling.”

Though he initially volunteered for a two-week stint, Lowrey and other volunteers may likely be in Puerto Rico until there’s some sense of recovery.

For now, in the hours before Hurricane Maria hits, Lowrey and others are on standby.

Lowrey isn’t the only member of the BLM’s St. George Field Office who volunteered to aid in cleanup and recovery efforts, said Christian Venhuizen, a spokesman for the BLM’s Color Country District in Southern Utah.

One of the office’s special agents — whose name was not available at the time this article is published — joined Lowrey on the way to the East Coast along with other volunteers from across the southwestern United States.

They have a desire to serve the community, Venhuizen said, and right now, along with many others, they’re doing it in front of a hurricane.

The Associated Press contributed to this story. 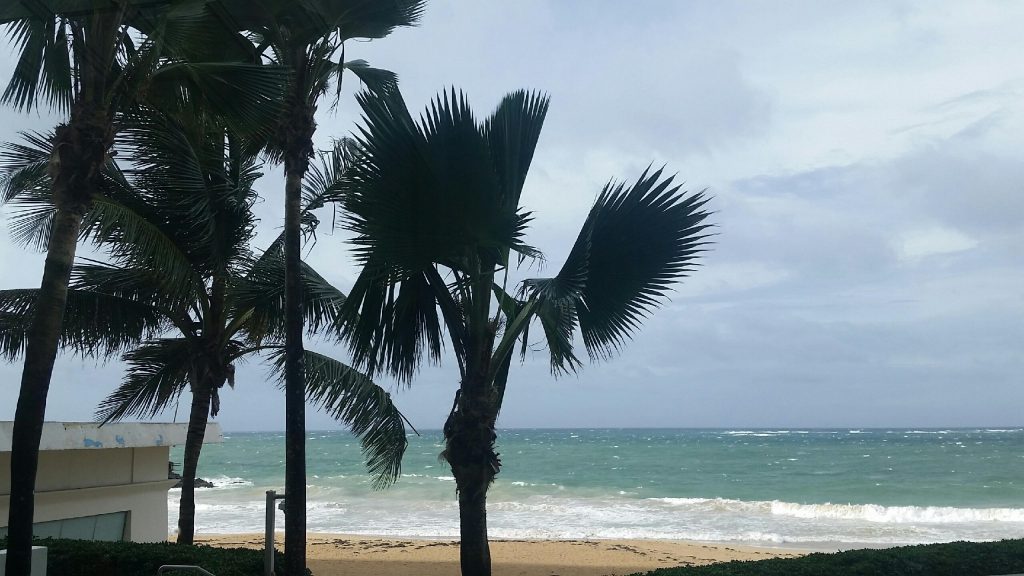 This photo submitted around 2:15 p.m. MDT Tuesday by Bureau of Land Management Ranger Scott Lowrey, who works out of the St. George (Utah) field office, shows gathering storm conditions in Puerto Rico as Hurricane Maria approaches. Lowrey reports the area he is in just lost power and is running off of generators. He is among a group of BLM volunteers who traveled to to the East Coast to render in Hurricane Irma recovery efforts and were redirected to Puerto Rico to help with the expected aftermath of Hurricane Maria, San Juan, Puerto Rico, Sept. 19, 2017 | Photo courtesy of the Bureau of Land Management, St. George News 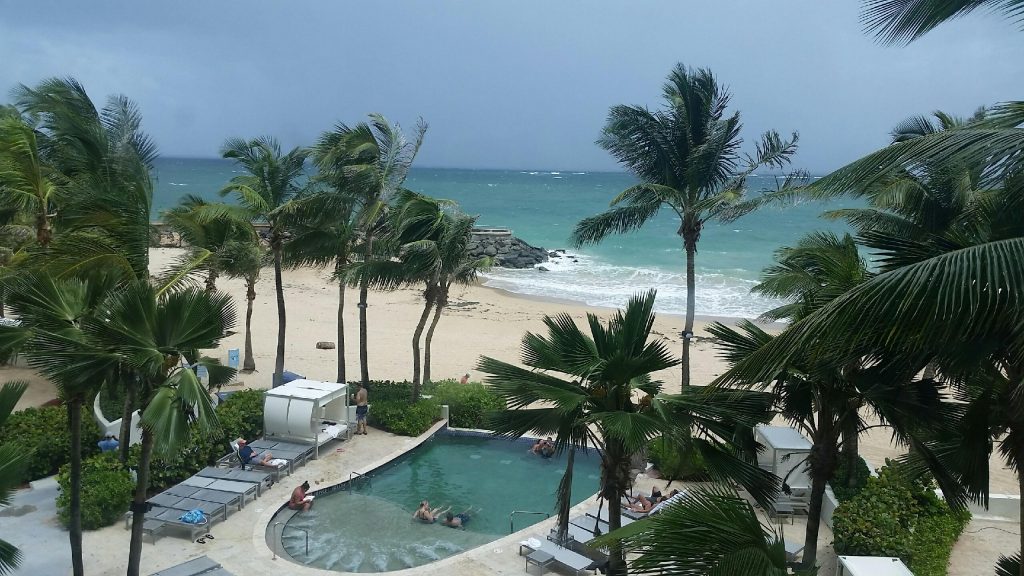 This photo received by the Bureau of Land Management St. George (Utah) Field Office around noon MDT Tuesday from Ranger Scott Lowrey shows gathering storm conditions in Puerto Rico as Hurricane Maria approaches. Lowrey is among a group of BLM volunteers who traveled to to the East Coast to render in Hurricane Irma recovery efforts and were redirected to Puerto Rico to help with the expected aftermath of Hurricane Maria, San Juan, Puerto Rico, Sept. 19, 2017 | Photo courtesy of the Bureau of Land Management, St. George News 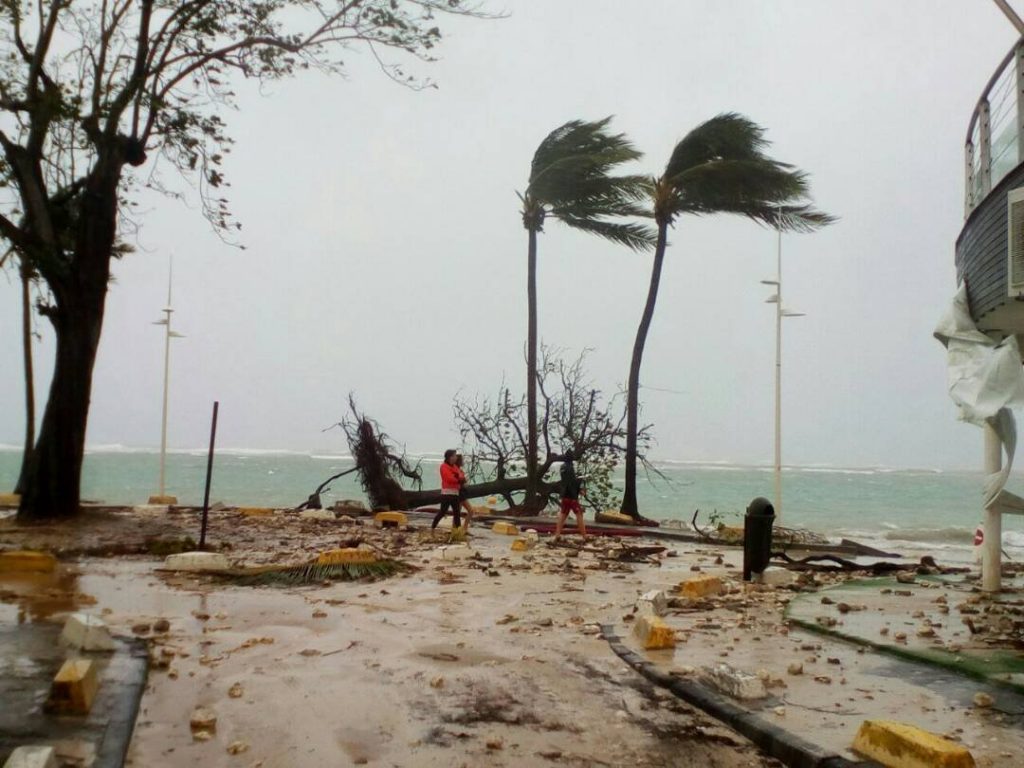 People walk by a fallen tree off the shore of Sainte-Anne on the French Caribbean island of Guadeloupe, early Tuesday, Sept. 19, 2017, after the passing of Hurricane Maria. (AP Photo/Dominique Chomereau-Lamotte) 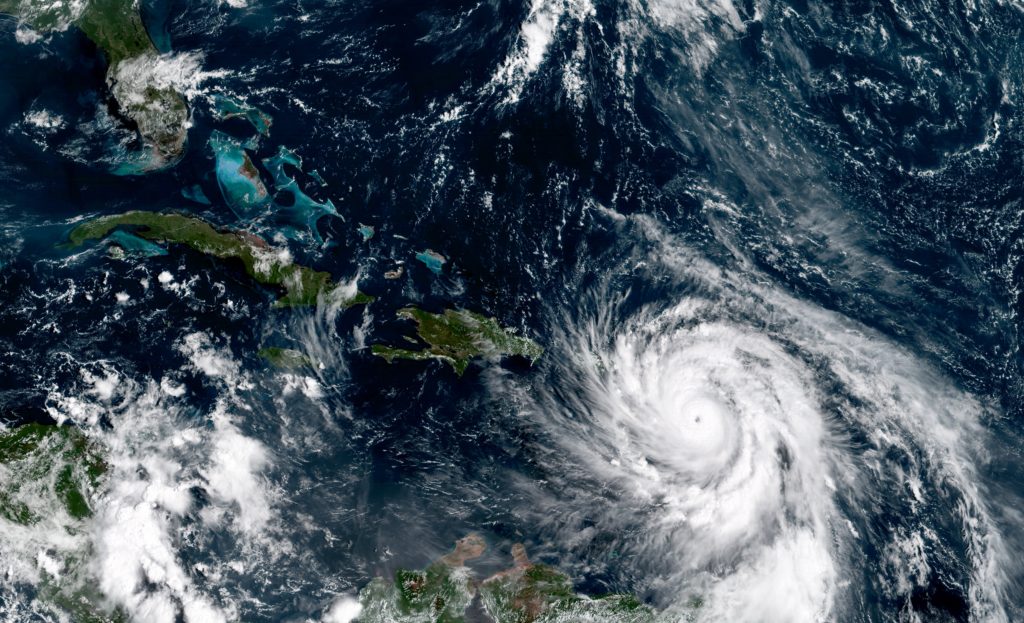 A lady holds her rosary as she takes part in a prayer circle at a makeshift at the Juan Ponce de Leon Elementary School before the arrival of Hurricane Maria, in Humacao, Puerto Rico, Tuesday, Sept. 19, 2017. Puerto Rico is likely to take a direct hit by the category 5 hurricane. Authorities warned people who live in wooden or flimsy homes should find safe shelter before the storm's expected arrival on Wednesday. (AP Photo/Carlos Giusti) 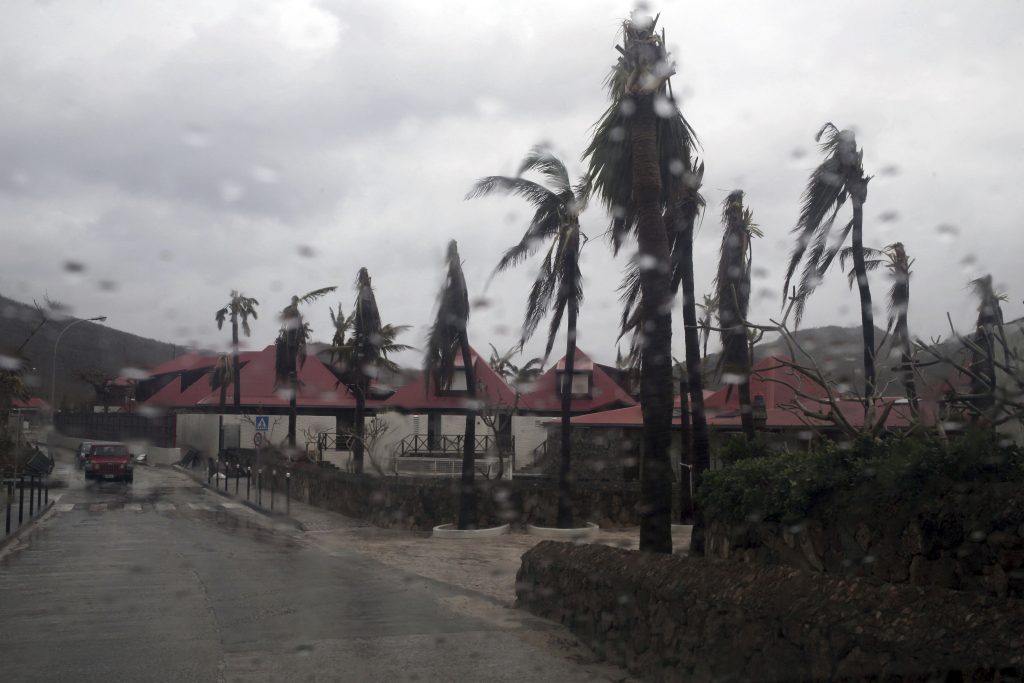 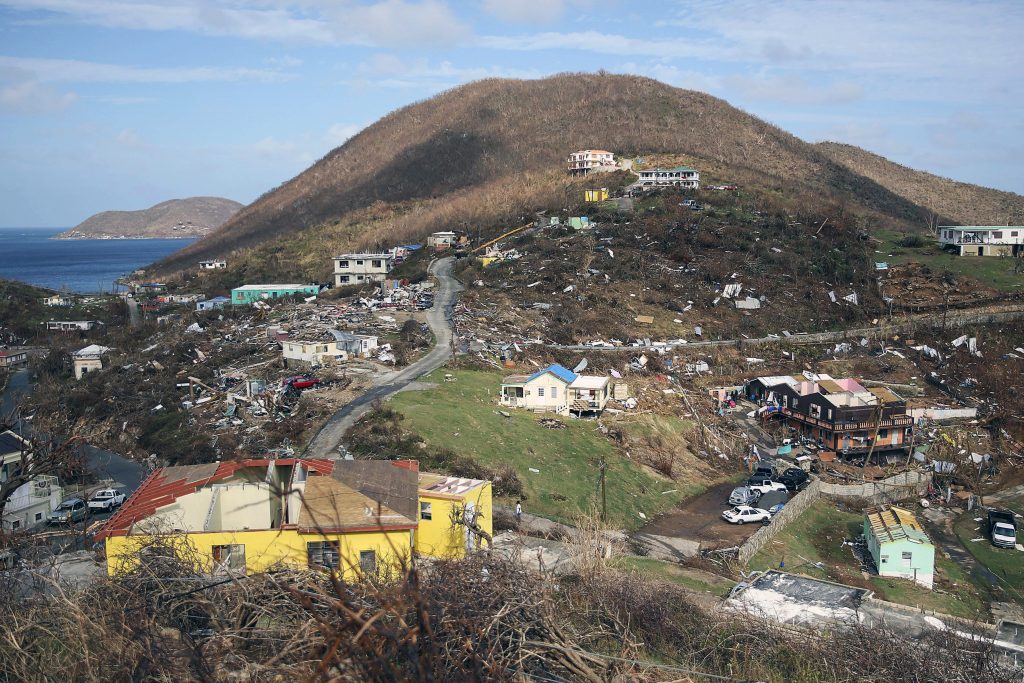 This photo provided by the British Royal Navy shows the destruction after Hurricane Irma, in Virgin Gorda, British Virgin Islands, Tuesday, Sept. 19, 2017. Forecasters warned Hurricane Maria would remain a Category 4 or 5 storm until it moves over the Virgin Islands and Puerto Rico. The storm's hurricane-force winds extended out about 35 miles (45 kilometers) and tropical storm-force winds out as far as 125 miles (205 kilometers). Hurricane warnings were posted for the U.S. and British Virgin Islands, Puerto Rico, Guadeloupe, Dominica, St. Kitts, Nevis and Montserrat. (Joel Rouse/Royal Navy via AP) 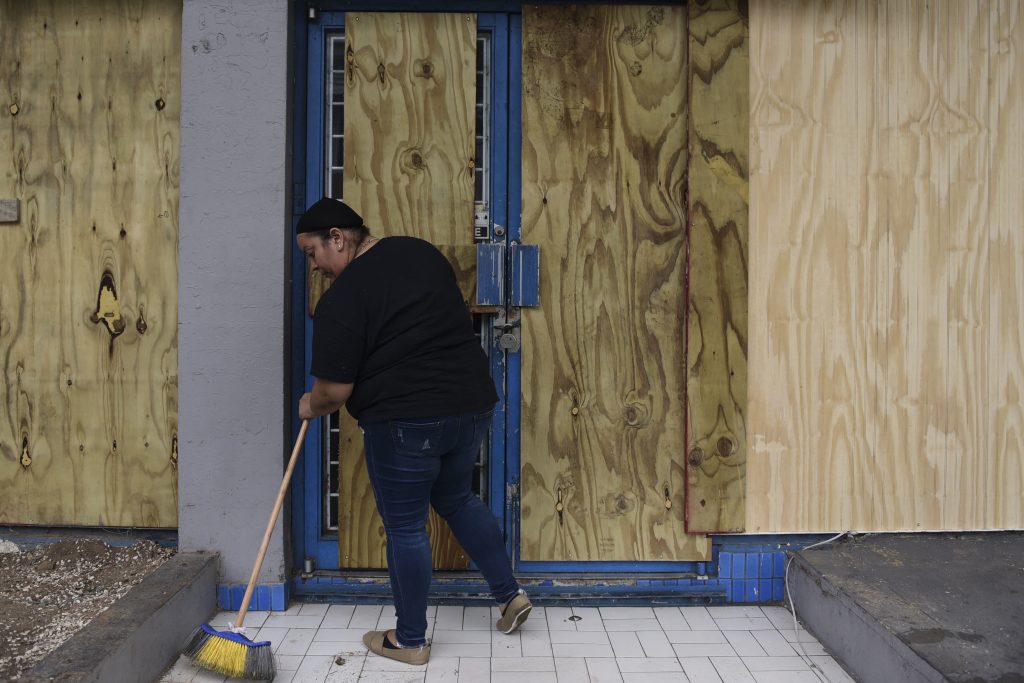 A woman sweeps the front of a storefront boarded up in preparation for Hurricane Maria. Puerto Rico is likely to take a direct hit by the category 5 hurricane. Authorities warned people who live in wooden or flimsy homes should find safe shelter before the storm's expected arrival on Wednesday, Humacao, Puerto Rico, Sept. 19, 2017  | AP Photo/Carlos Giusti, St. George News

Enforcing the law, protecting resources: A day in the life of a BLM ranger

Authorities warn of 'Hurricane Harvey' charity scammers. Which organizations can you trust?