CEDAR CITY — With a large portion of Cedar City sitting in the stands at Canyon View High School on Friday night, each person got to watch the Cedar Redmen score 19 points in the final five minutes of the game to beat rival Canyon View 19-10 to start Region 9 play.

“I was pretty frustrated for three quarters,” Redmen head coach Josh Bennett said. “But something woke them up there in the fourth quarter. We needed a spark, and that long touchdown pass provided that spark.”

The Falcons and Redmen played just how a rivalry should be played. No matter the skill level of each team, it was close throughout and big plays were made on almost every drive.

Neither team was able to score most of the first half, but the Falcons had just taken a punt from their own 45 to the Redmen’s 27 only a minute before the half ended.

Four plays later, Falcons quarterback Colten Shumway found Tyler Nelson open in the back of the end zone and floated the ball up to him. Nelson was able to high point the ball and get his foot down right inside the field of play as the Falcons took a 7-0 lead after the extra point. 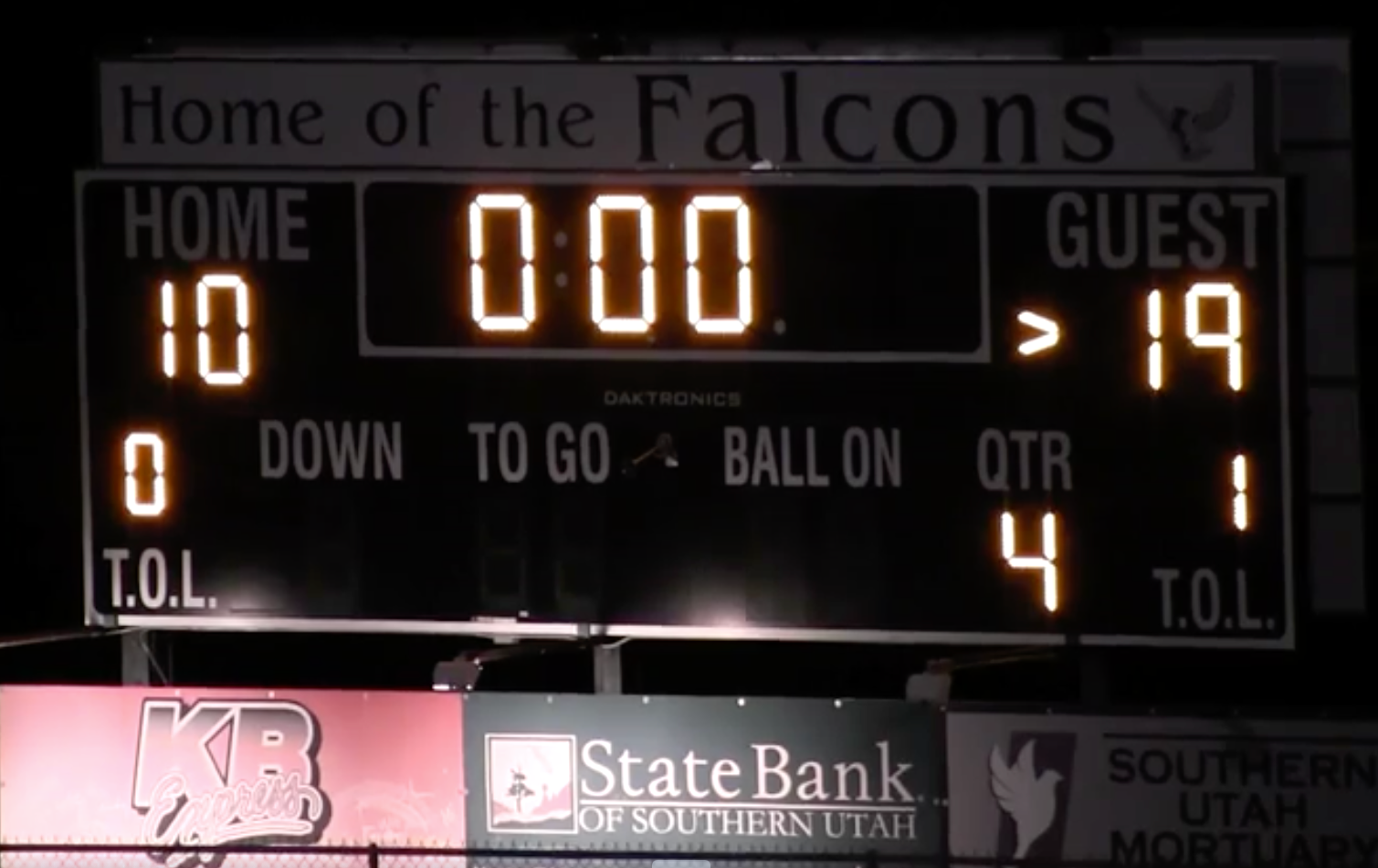 On the next drive, Falcons defensive back Stockton Rigby intercepted a pass to help the Falcons keep the first half a blank for the Redmen.

Kyler Bergener was the go-to guy for the Falcons. He finished the first half with 13 carries for 101 yards for a stellar 7.8 yards per rush average. For the game, Bergener finished with 24 carries for 126 yards.

The Redmen had a drive going near the end of the first half, starting from their own 42-yard line. Trenton Maurer thought he had a 5-yard touchdown run with one minute left, but it was called back after a lineman was called for holding.

On the next play, Falcons linebacker Tyler Haley was able to sack Redmen quarterback Jaxon Garrett back to the 26-yard line with 29 seconds left in the half.

The Redmen lined up for a 42 yard field goal attempt, but Rigby was able to get into the backfield to block the attempt. The Falcons took the 7-0 lead into halftime.

Early in the third quarter, the Falcons Tyson Davis hit a 32-yard field goal and stretched the lead to 10-0.

The Redmen were able to take a punt 44 yards to the Falcons 44-yard line, but threw an interception to the Falcons once again on the ensuing drive with 8:31 left in the game.

On the first play of the next Redmen drive, with just over five minutes left in the game, Garrett called for Luke Maggio to run a curl route. Garrett pump faked twice in Maggio’s direction and got the defense to bite on both as Maggio ran a stop-and-go route instead. Garrett threw the ball up and hit Maggio in stride for a 75-yard touchdown play.

The ensuing point after was pressured by the Falcons, and the Redmen kicker put it off one of his offensive lineman’s backs. This is the second week in a row that the Falcons have forced a missed extra point. The Falcons held on to a 10-6 lead with 5:07 left in the game.

Bennett had a choice to make on the kickoff: Go for the onside kick to get the ball right away, or kick it deep and trust that his defense could hold the run-heavy Falcons offense to a quick three-and-out. Bennett chose the latter, and it worked out for his team.

The defense was able to force a three-and-out, and Maggio took the punt all the way down to the Falcons 11 yard line.

“He’s one of the staples on our team,” Bennett said. “He’s a great leader. If we need a big play, that’s who we go to. (He) was the spark we needed to get back into the game.”

Maggio said he was just trying to help his team.

“All week long we just said in practice, ‘Next play,’” Maggio said. “‘Don’t let our highs be too high or our lows be too low. That’s exactly what we did. I love my brothers and I know we can push through anything. They are one hell of a team.”

Three plays later, Maurer scored on a 2-yard run to put the Redmen up 13-10 after the extra point attempt was good. Maurer finished the game with 15 carries for 82 yards.

The Redmen got some icing on the cake by scoring on the last play of the game when Drake Fakahua ran 9 yards into the end zone to seal the victory for the Cedar.

Despite the loss, Falcons head coach Skyler Miller remained positive on the effort his team gave.

“Both teams played really hard,” he said. “Our kids fought and we are going to just keep progressing and keep coaching and keep pushing our kids. We’re not quitting.

“We are not going to worry about what we just did tonight, because it’s done. It’s over. You can’t worry about it. You have to move on. We are going to focus on tomorrow and get right back to work on Monday. We’re not going to talk about anything else but moving forward.”

Bennett was also very pleased with the way his team battled back in the final minutes.

“I was proud of how we fought and didn’t give up. We could have easily gave up, but we fought hard and came back and won it.”

The Redmen (2-2 overall, 1-0 region) will play next week at home against the Desert Hills Thunder at 7 p.m.

The Falcons (0-4 overall, 0-1 region) will try to turn the momentum from their last two games, where they have been extremely competitive, into a win against the Hurricane Tigers at Falcons Stadium next week at 7 p.m.