ST. GEORGE — It brings tears to Del Bracken’s eyes even today, years later. A husband searching for his wife who never showed up for work is told that she was killed in a traffic accident after officers found the woman’s body inside her vehicle – the same car Bracken would tow from the scene an hour later.

The husband came across the scene of the crash while searching for his wife. After confirming it was her vehicle, he inquired about her condition, which is when he received the devastating news – a scene Bracken would remember years later.

Bracken owned a local gas station and bought his first tow truck in 1978 when he realized there were no towing services available in the area, and decades later is still in the towing business as owner of Bracken’s Auto Tech and Towing.

In the United States there are more than 35,000 tow companies and hundreds of thousands of individuals employed in the towing industry, including tow truck operators, dispatchers, safety advisers and owners. Tow truck operators can be found on the side of more than four million miles of the nation’s roadways and respond to nearly 15 million accidents per year.

Doing their jobs should not be a life-or-death situation, but many times it is. Motorists speeding past emergency vehicles is an everyday occurrence on the nation’s highways, even though every state has enacted a “move over” law that requires drivers to slow down or switch lanes when emergency vehicles are on the scene.

“It’s pretty dangerous out there, and every once in a while have to jump to avoid being hit,” Bracken said.

The Emergency Responder Safety Institute, a national advisory group of public safety and transportation experts, estimates that on average, six to eight fire rescue and EMS workers are killed working in or near moving traffic each year, as are 10 to 12 police officers. The institute says that about 50 tow operators are killed.

“Being hit by a car is the biggest danger, particularly when people don’t move over when passing a crash scene,” Paul Hafen of Zion Motors said, adding, “If we have a trooper behind us at a scene then one in 500 motorists fail to move over, but if we are out there by ourselves then we’ll have one move over out of 500 drivers – it’s that bad.”

Hafen said he grew up in the towing business and spent a great deal of time riding alongside his father as they responded to calls, which ultimately made the transition into owning his own towing business natural.

Will Ban with Freedom Towing was 5 years old when he went to work with his father who drove a tow truck for a local company. “Even at that age I was fascinated with how everything worked,” he said.

Although his father’s health diminished a short time later, Ban stayed close to the field. Then, when he was 23 years old he had the opportunity to rebuild a tow truck and has been in the business ever since.

Ban also said that despite the move-over law, many drivers don’t change lanes unless a UHP trooper is there, and he experienced this firsthand several years ago when he was struck by a motor home while recovering a vehicle on the shoulder of the interstate and was only saved by the design of the bumper.

“People just come flying past you and they’d just as soon run over you than look at you,” Ban said.

Ladd Brindley of Ladd’s Towing in Cedar City started operating a tow truck evenings and weekends in 1992 while working a full-time job, and over time the business grew into a full-time venture. In February, he bought two more trucks from a company going out of business, and “the rest is history,” he said.

Brindley also said that his grown children work in the family-owned business now, and dangers naturally associated with the job have only increased since then. If one of his own is called out late at night to recover a vehicle or provide assistance, he doesn’t go to bed until he receives a text or call for them telling him they are OK, he said.

“I have to hear from them and know they are back safe, and then I can go to sleep,” Brindley said.

Tow truck operators confront death and destruction routinely as they clear away the wreckage scattered in the wake of a collision, and towing a vehicle that someone lost their life in exacts a price, and that price is paid by many operators even when they don’t talk about it.

Referring to the incident where the husband learned that his wife was killed in a traffic accident when she didn’t show up for work, Bracken recounted the lasting effect the experience had on him.

“The husband showed up while I was still on scene and he didn’t realize that his wife was there, in the car dead, and that one still brings tears to my eyes,” Bracken said.

Of the hundreds of crashes Brindley’s responded to over the years one particular accident stands out. Several years ago he responded to a rollover on Interstate 15 and approaching the scene his view was drawn to Christmas presents scattered across the roadway, and he noticed a woman sitting in the median.

The woman was holding a little girl in her arms, and it was obvious the child was dead, he said.

“She was holding her young daughter that didn’t make it, she was just sitting there in the median holding the child, staring straight ahead in shock,” Brindley said. “I think of that every time I drive by that spot; I can’t help it.”

Towing operators are responsible for many roadside services, including accident removal, towing a broken-down vehicle or changing a flat tire on the side of the freeway. More importantly, these operators remove damaged or disabled vehicles from locations where they can cause traffic congestion or even a traffic accident, which is an invaluable service to the community.

Just as there are risks, so there are aspects of the job that drives the four towing operators interviewed by St. George News, and each related what they enjoyed most about the job.

For Bracken it’s getting to know people during long-distance towing that fascinates him. He tows vehicles to Las Vegas fairly often, and gets to know his customers during the ride.

“One of the things I like the most about the business is meeting people, and getting to know a little bit about their lives.”

Hafen said that one misconception he is confronted with when working with the public is the perception that tow truck drivers are mean, and spend their day running from one location to another towing or repossessing vehicles.

His company doesn’t handle repossessions, nor does it tow vehicles from parking lots. He said tow truck drivers are actually nice people, and commented on his favorite part of the job.

“I like helping people when they really need it, and we get to do that every day.”

Ban, who has been fascinated by the wrecking business since childhood, agreed that helping people is important, and offered another element that gets him up in the morning.

“What keeps me going is the variety, and I never know what I’ll be doing at any given time, and every day is different.”

A Utah Department of Transportation official said that everyone at an accident scene is under a heightened sense of alert and are watchful of passing motorists, including tow truck operators.

The official also said that the towing services in Southern Utah do an impeccable job, are professional and thorough even when a travel trailer breaks into pieces. No matter how big the accident scene is, these operators are dumping kitty litter for the fluids, clearing debris and picking up the pieces.

“They are the best, hands down,” the UDOT official said.

In 2015 there were nearly 7 million reported crashes in the United States, including more than 32,000 fatal crashes. Add to that another 174,000 vehicle fires reported in the same year, according to a 2017 National Traffic Incident Management report.

Each of the owners interviewed for this story emphasized the importance of the “move over” law, which can mean the difference between life and death for them, and already has for those killed in the line of duty.

In 2016, the International Towing & Recovery Hall of Fame and Museum added 22 names to the Wall of the Fallen during its 10th annual ceremony honoring towing operators who have died in the line of service. More than 400 names are engraved on the wall.

About the Labor Day job series

Labor Day invites us to give “tribute to the contributions workers have made to the strength, prosperity, and well-being of our country,” according to the Labor Department.

St. George News brings this series of stories on Labor Day to recognize workers whose contributions may go unnoticed, who may be less visible to the general public than others and to unpack some of what goes into everyday jobs performed by everyday people in our communities. 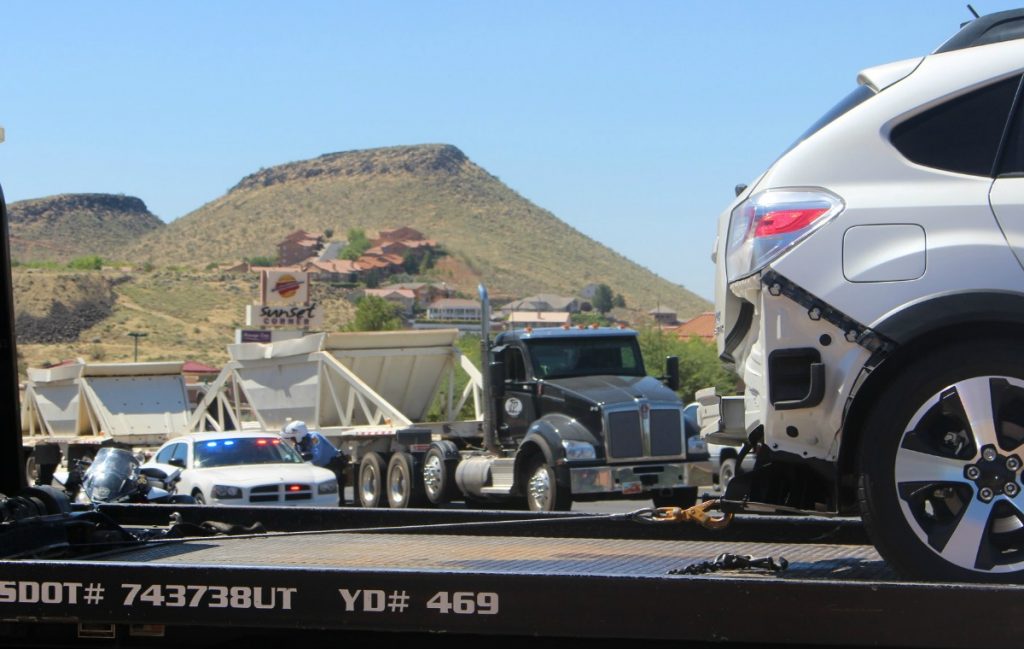 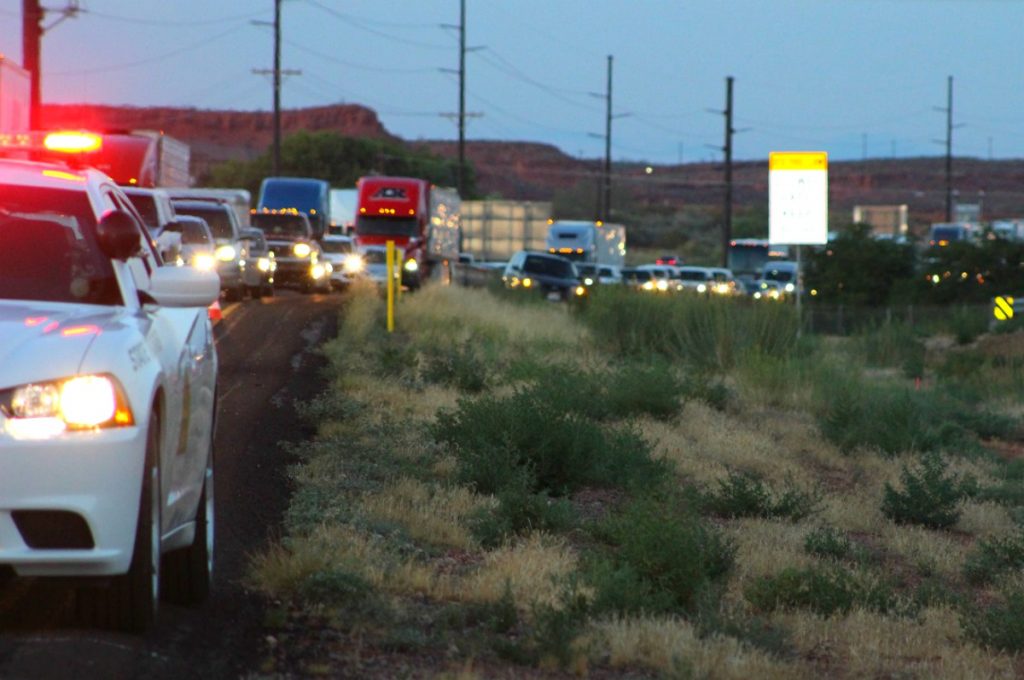 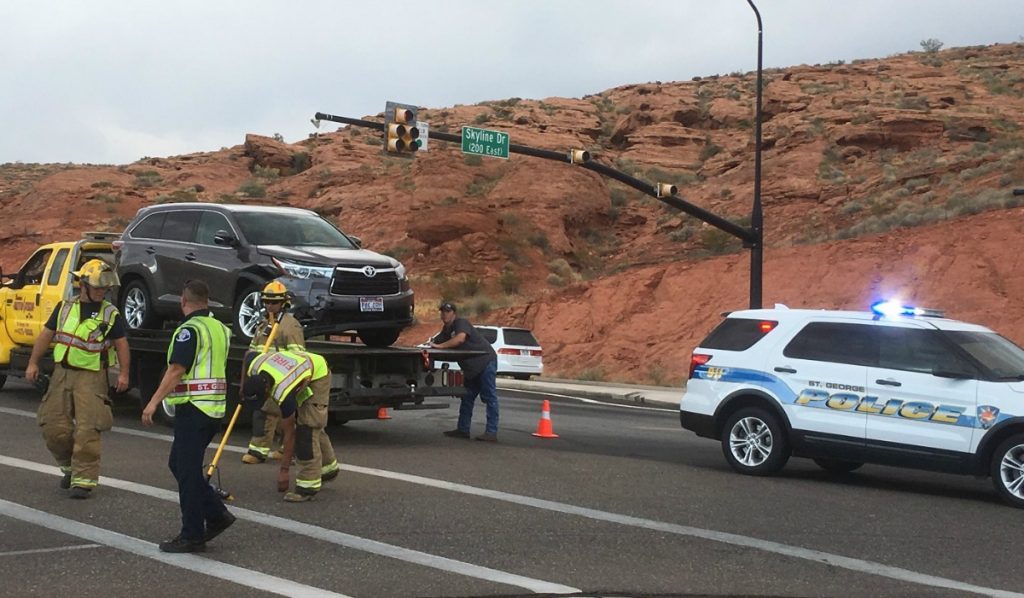 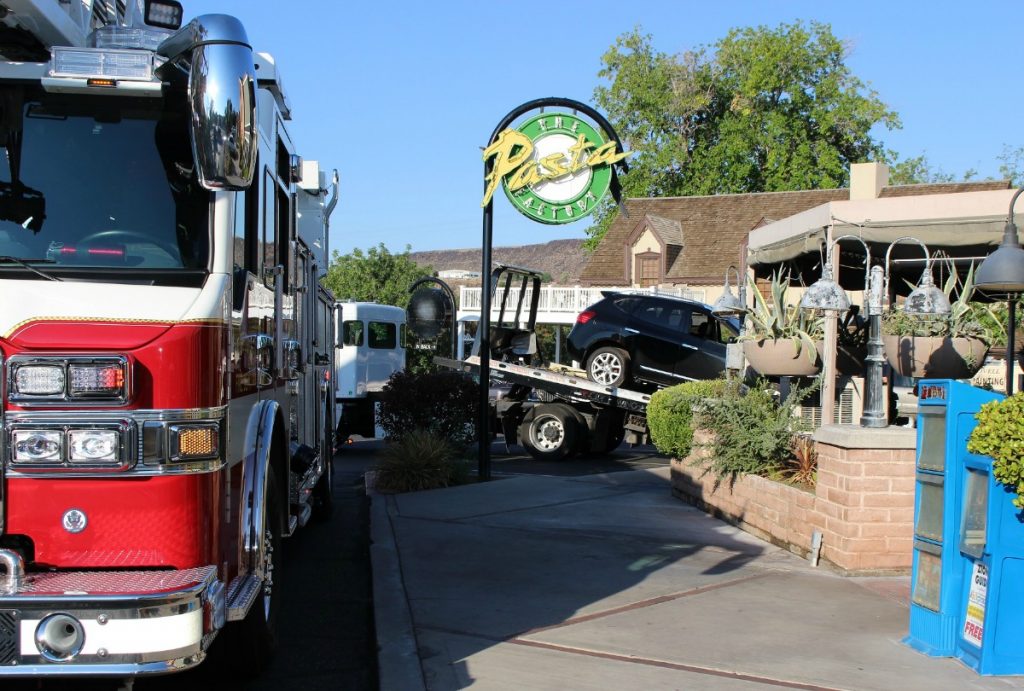 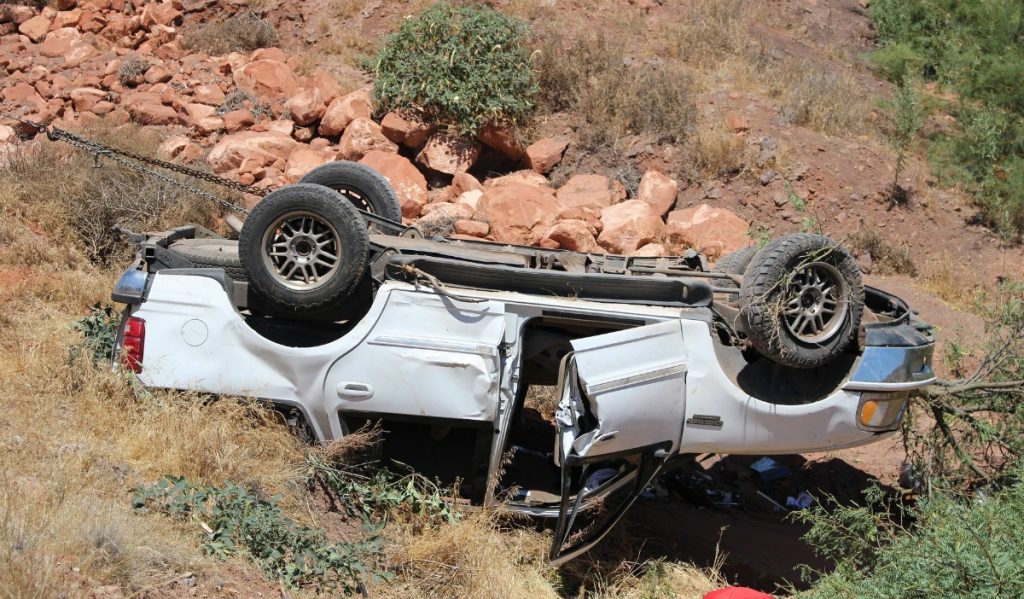 File photo of SUV being winched up from ravine before it is towed from Old Highway 91, Ivins, Utah, July 13, 2017 | Photo by Cody Blowers, St. George News

Driver crashes SUV into outside patio of restaurant

Crashes, deer and DUIs keep responders busy into the night

2 crashes back traffic up for miles on I-15

Pregnancy during a pandemic: The stress of COVID-19 on pregnant women and new mothers is showing