ST. GEORGE – For the second time in the past four years, the Desert Hills Thunder managed to capture lightning in a bottle, winning the 3AA state championship on the last play of the championship game (plus a huge extra point last year). 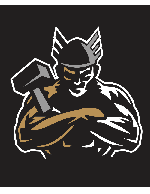 And for the second time in four years, D-Hills heads into a new season as the defending state champs.

But things are a little different this time. Though stacked at many positions (12 returning starters), the Thunder will have to figure out how to replace superstar and state MVP Nephi Sewell and first team all-staters Bundy Sewell, Ty Warner and Ryan Hoppie, plus quarterback Quinn Kiser.

Add to that the intrigue of moving to 4A along with the rest of Region 9, with new statewide rivalries and better competition, and things will not be easy for the Thunder.

“We’ve been working tirelessly to put ourselves in a position to try and make another run,” DH coach Carl Franke said. “(Brock Parry) has always been ready (at running back). Nephi was a little bit stronger, whereas Brock is a little bit more shifty. But Brock’s at top speed after two steps.”

For Parry and Desert Hills’ new quarterback (Noah Sewell or Logan Wilstead) to be successful, they’ll need the massive Thunder offensive line to be successful. It starts with highly-touted (and recruited) Penei Sewell.

“I learned a lot (at various camps) this summer,” Penei Sewell said. “We worked a lot on different techniques, but also to have more confidence in my game. I want to lead this team and have us be successful.”

On that big front line with Sewell will be two other returning starters in center Ryan Warner and tackle Leonides Jacobsen. There’s still a battle for the other two O-line spots between Mason Litim, Enoka Fuailetolo, and Brandon Anderson.

Desert Hills will also look to replace a couple of good receivers in Logan Hokanson and Marco Jordan. Bo Barben and state championship hero Gavin Young will be key contributors.

The Thunder will try and platoon as much as possible this season. That means a different group of players on that side of the ball.

The secondary has cornerback Giovanni Vaifanua back, but will have to break in new players at the other corner (Cooper Kenney) and at both safeties (Dawson Mayfield and Peyton Pace).

Desert Hills opens the season with 6A powerhouse Jordan at Thunder Stadium Friday, then will hit the road for two straight game (at Salem Hills and at Mission Hills, Calif.). Region 9 play starts Sept. 8 with a home game vs. Hurricane.