Shortly after 11 a.m. officers and emergency personnel were dispatched to an incident on North Bluff Street near W. 700 North involving a tire that came off a moving vehicle and struck two other vehicles.

Upon arrival, responders found a small green pickup truck that was missing a rear tire on the driver’s side, along with a damaged dark blue Chevrolet Malibu and green Saturn SUV.

Officers learned that the man driving the pickup was heading north on Bluff Street after having the truck’s brakes serviced at an automobile repair shop, St. George Police Officer Ken Childs said.

While in motion, the driver’s side rear tire came off the truck and rolled forward, veering into the southbound lanes and striking the front grille of the Saturn coming the other direction with enough force to deploy the front airbags and smash the headlight.

The tire bounced off the Saturn and flew back over to the northbound lanes of Bluff Street and nearly struck the Malibu. The driver was able to swerve to avoid the tire, but the Malibu was struck by the hub assembly that detached and came right after the tire, Childs said.

Joe Casella was driving the pickup when the tire came off. He said he felt something metal that he thought was the brake drum rubbing along the ground after the tire went flying off in front of his vehicle.

“Once it hit the Saturn, the tire came flying about 20 feet up in the air over my way and almost hit the Malibu, but he swerved and missed it, but was hit by the drum right after,” Casella said.

No citations were issued in the incident, as it was determined during the investigation that the lug nuts used to attach the tire to the vehicle may have been missing or not applied properly when the brakes were serviced, Childs said.

Minor injuries were reported, Childs said. No other vehicles were involved and no one was transported to the hospital.

“The most important thing is that no one was injured,” the Saturn driver said.

Headlight on green Saturn SUV is destroyed when it is struck by a tire that came off a pickup truck on Bluff Street Friday, St. George, Utah, Aug. 4, 2017 | Photo by Cody Blowers, St. George News 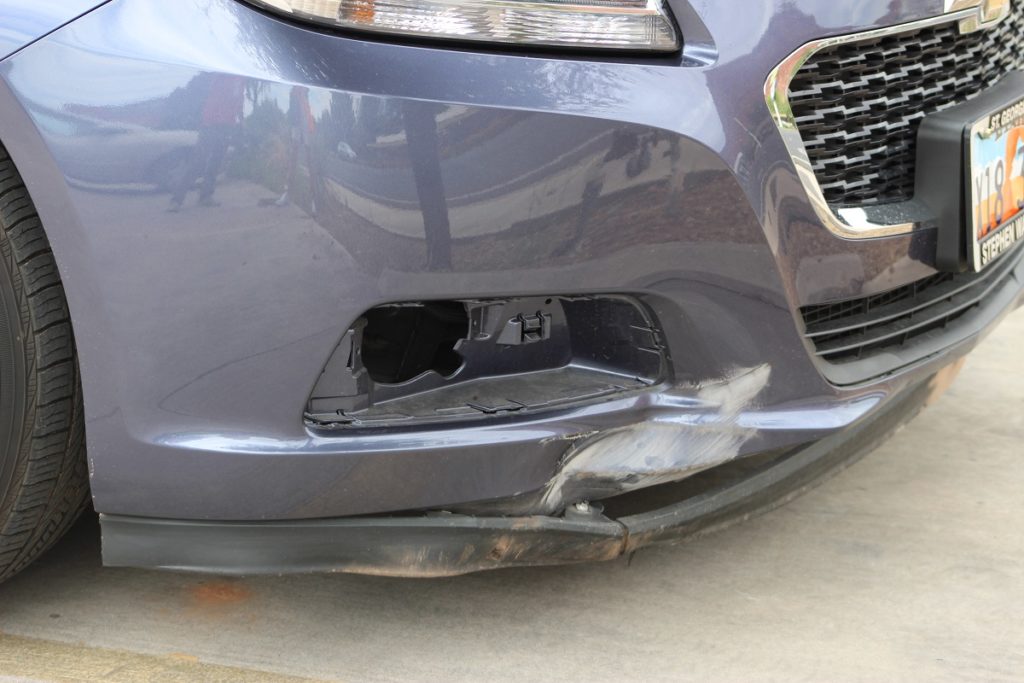 Front bumper, or fairing, is damaged on a Chevy Malibu when struck by a metal hub assembly that came off a pickup truck on Bluff Street Friday, St. George, Utah, Aug. 4, 2017 | Photo by Cody Blowers, St. George News

Semitractor tires roll 1 mile after falling off on I-15