This 2009 file photo shows hikers gathering to rest and take pictures at the Middle Emerald Pool. This portion of the Emerald Pools Trail was closed in 2010 due to rockfall and mudslide damage, Zion National Park, Utah, April 18, 2009 | Photo by Reuben Wadsworth, St. George News

ZION NATIONAL PARK — Following shortly on the heels of a Tuesday announcement from the U.S. Department of the Interior that Zion National Park would be one of 42 parks to receive funding for high-priority maintenance and infrastructure projects, the National Park Foundation announced a $1 million grant from the George S. and Dolores Doré Eccles Foundation.

In addition to the grant, which will be used for park trail restoration and other projects, the Five County Association of Governments has applied for a portion of $100 million approved by the 2017 Utah Legislature for state recreational areas. If approved, the funds would be used for a proposed St. George-to-Springdale transit line.

Emerald Pools Trail and other improvements within Zion

A portion of the $1 million Eccles Foundation grant will be used to match the approximate $346,000 of federal funds from the “Centennial Challenge” program to reduce deferred maintenance on the Lower and Middle Emerald Pools trails. The middle trail has been closed since December 2010 when rockfalls and mudslides damaged it. The lower trail is still open, but it was damaged by extreme rainfall in January of this year.

The grant from the George S. and Dolores Doré Eccles Foundation, a philanthropic organization that has been vital to nonprofit organizations throughout Utah, most notably its universities, represents the largest private contribution ever awarded to the National Park Foundation and is earmarked to specifically benefit Zion as it grapples with a large maintenance backlog.

The park approached the newly formed Zion Natl Park Forever Project for help in funding the trail restructuring, said Mark Preiss, director of the Zion Forever Project, and the organization responded by raising the first $10,000 to get the grant application process off the ground. Completing that first step gave the park confidence that securing the funding was possible.

In the statement from the National Park Foundation, Eccles called the national parks “the most incredible places anywhere in our country.”

“We’re so fortunate to have more than a dozen of them right here in our backyard!” he said. “Our foundation’s directors take special pride in Utah’s national parks, and as we welcome the 101st year of our National Park Service, we remain committed to ensuring its vibrant future in our state.”

The trail restoration and restructure will be done in a way that minimizes future damage, Preiss said.

The work on the Lower and Middle Emerald Pools trails will go on simultaneously as one big project, Zion National Park Road Supervisor Tony Ballard said. While the middle trail will be realigned “to go up and around a re-slide,” the lower trail will not be realigned but will completely replaced.

Though he cannot say for sure yet, Ballard said the trail most likely would be closed during work on the project for safety concerns, especially because the middle trail is directly above the lower trail, and debris could fall.

Work on the trail is anticipated to be completed by December 2019. Ballard said it is a slow process, with design, engineering and compliance processes that must be completed before work can begin, which will most likely be in early to mid-2019.

In addition to the Emerald Pools trail work, the National Park Foundation announcement stated additional funds from the Eccles grant will also benefit 20,000 Utah school children who have never visited a national park participate in engaging, hands-on, in-park experiences through programs such as the foundation’s “Open OutDoors for Kids” initiative and “Concrete to Canyons.”

The grant to fund the trail restoration is a small piece of the Zion Forever Project’s efforts in leveraging money to address the $70 million maintenance backlog Zion is currently experiencing. As part of these efforts, each year the organization will produce a new field guide communicating the immediate needs of the park, said Lyman Hafen, executive director of the Zion Forever Project.

The current field guide available is for 2018 and lists 28 projects and the monetary needs of each project in the three parks.

The Utah Legislature recently directed spending $100 million throughout the state to reduce congestion and economically benefit recreational areas. Now the jockeying among entities to obtain some of that funding has begun.

Zion National Park has been called out as one of the top hot spots to receive the funding in order to help alleviate overcrowding, Curt Hutchings, transportation planning manager for the Five County Association of Governments, said.

Five County AOG has applied for $9 million of those funds specifically for the proposed St. George-to-Springdale transit line, Hutchings said.

The application process for the funds is currently going on. In August and September, Utah Department of Transportation will assess the applications, November will bring the public comment period and by December the list of the entities who have received funding will come out.

Indications are good that the proposed bus line will receive some of the funding, Hutchings said.

Springdale is really pushing for the bus route because it’s being impacted the most, he said, and the proposal is also appealing to other communities along the route, including Hurricane, LaVerkin and Virgin, all of which will have at least one stop. At this point, specific stop details haven’t been worked out. More work needs to be done, Hutchings said, to concretely understand what is needed and he projects other bus lines would feed into it.

According to projections, ridership on the proposed transit line would be approximately 250,000 riders per year, which does not sound like much compared to the 4.3 million visitors Zion received last year, Hutchings said, but anything done to alleviate the pressure will be welcome.

“It’s not going to be a silver bullet, but it’s a fairly sizable piece of the pie,” Hutchings said of the relief the bus line may bring to Zion’s overcrowding.

Springdale Mayor Stan Smith said he’s also optimistic the proposed bus line will become a reality. From the planning meetings he’s attended he gets the impression it is something UDOT is really pushing for, he said, and that even the state Legislature sees the need to help out with congestion.

A St. George-to-Springdale transit will meet three major criteria UDOT wants to see in a project, Smith said. It will reduce traffic, it will bolster tourism and it will provide a positive economic impact.

In Smith’s mind, the transit line will do a lot more than help tourists – it will be a boon to the residents of Springdale and Rockville – especially the elderly, he said. Aging Rockville and Springdale residents who are unable to drive will be able to go into St. George by themselves to shop or to doctor appointments and the like.

By the same token, senior citizens in St. George who have been unable to visit Zion because of transportation barriers will have an opportunity to see the park without having to drive.

As well, Smith said, the transit line would be a boon to employees of Springdale businesses who live elsewhere and could increase the viability of the St. George Regional Airport by giving tourists a direct link to the park without having to rent a car.

“I don’t see a flaw,” Smith said of the proposed bus route. “Studies have shown it’s viable. It’s a no-brainer for the state.”

Some, however, are not as supportive of the proposed bus line. For instance, Richard Madsen, who owns Zion Tow in Springdale, said the proposed bus route would barely make a dent in the traffic coming into town. He said there have been proposals to build parking structures in outlying communities but he thinks building such structures would create animosities between the towns.

Preiss, who said the Zion Forever Project has nothing to do with the proposed bus line, supports it and feels the park should also look at doing something similar at the East Entrance where 20 percent of Zion’s visitors enter. 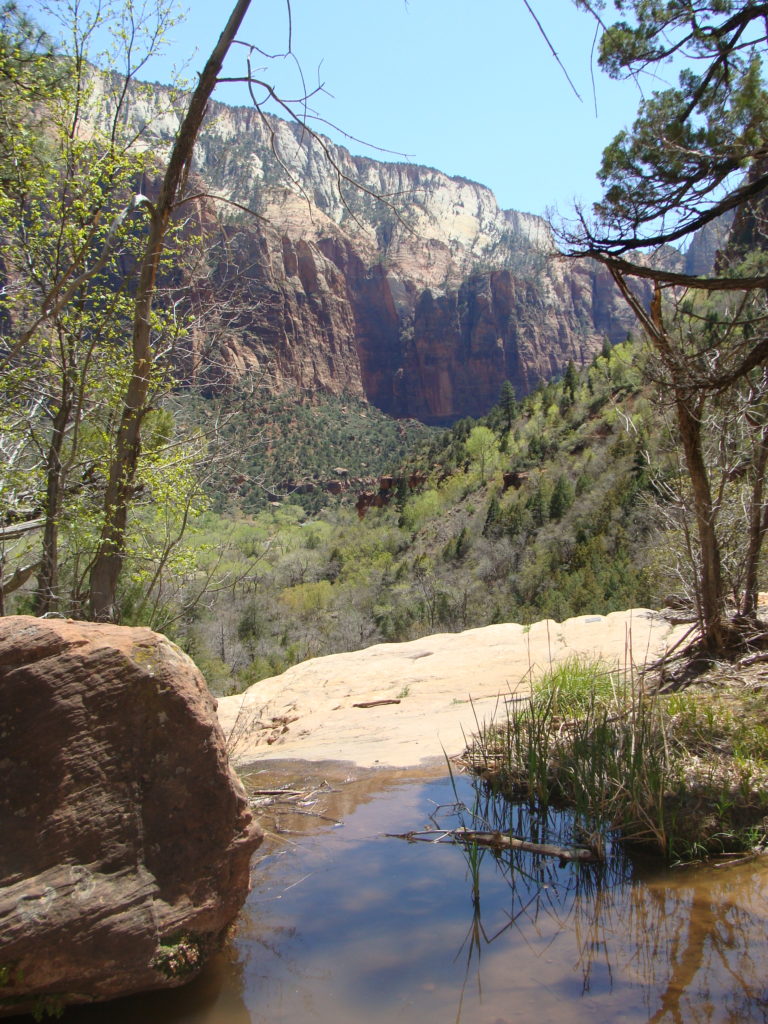 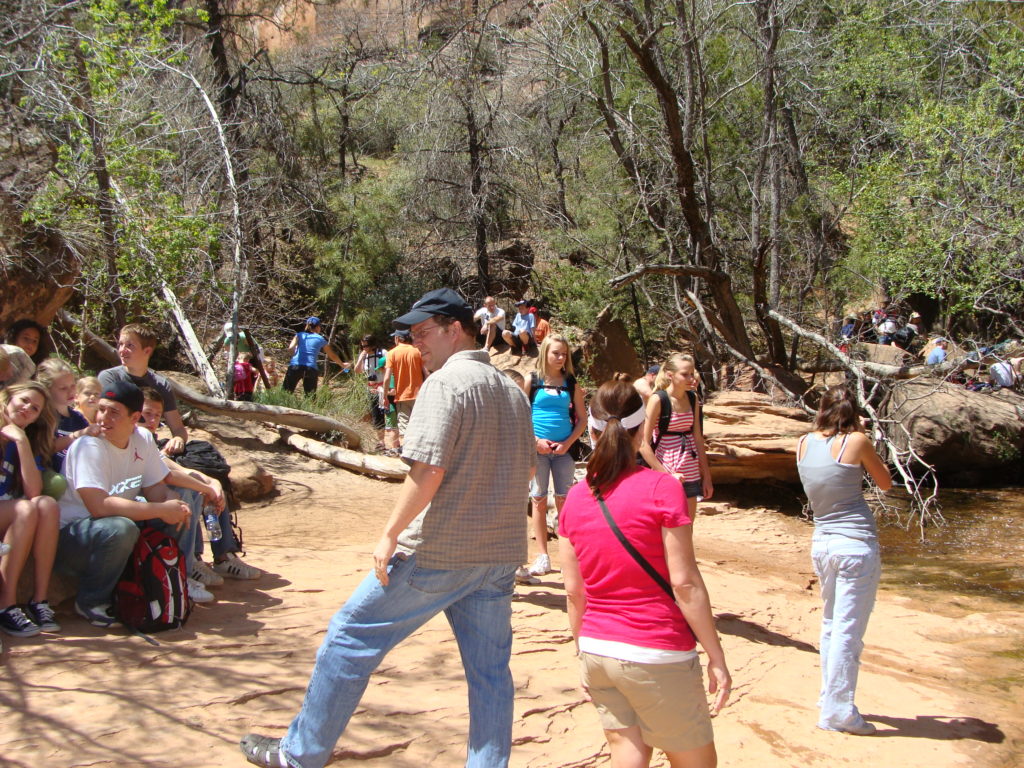 This 2009 file photo shows hikers gathering to rest and take pictures at the Middle Emerald Pool. This portion of the Emerald Pools Trail was closed in 2010 due to rockfall and mudslide damage, Zion National Park, Utah, April 18, 2009 | Photo by Reuben Wadsworth, St. George News 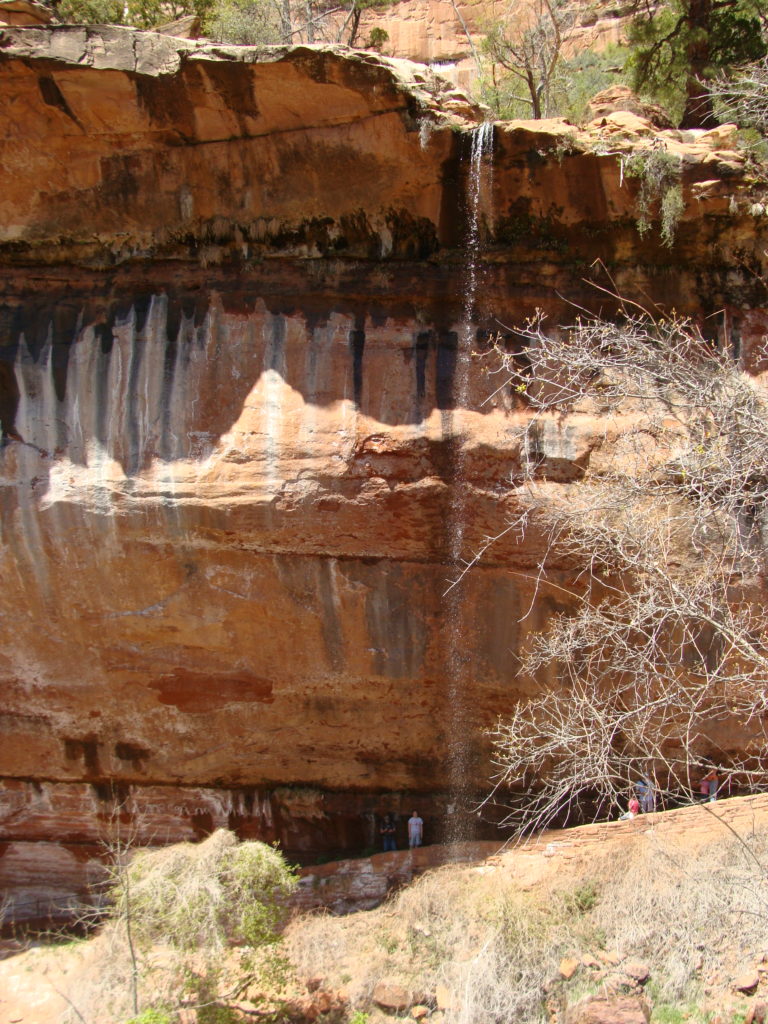 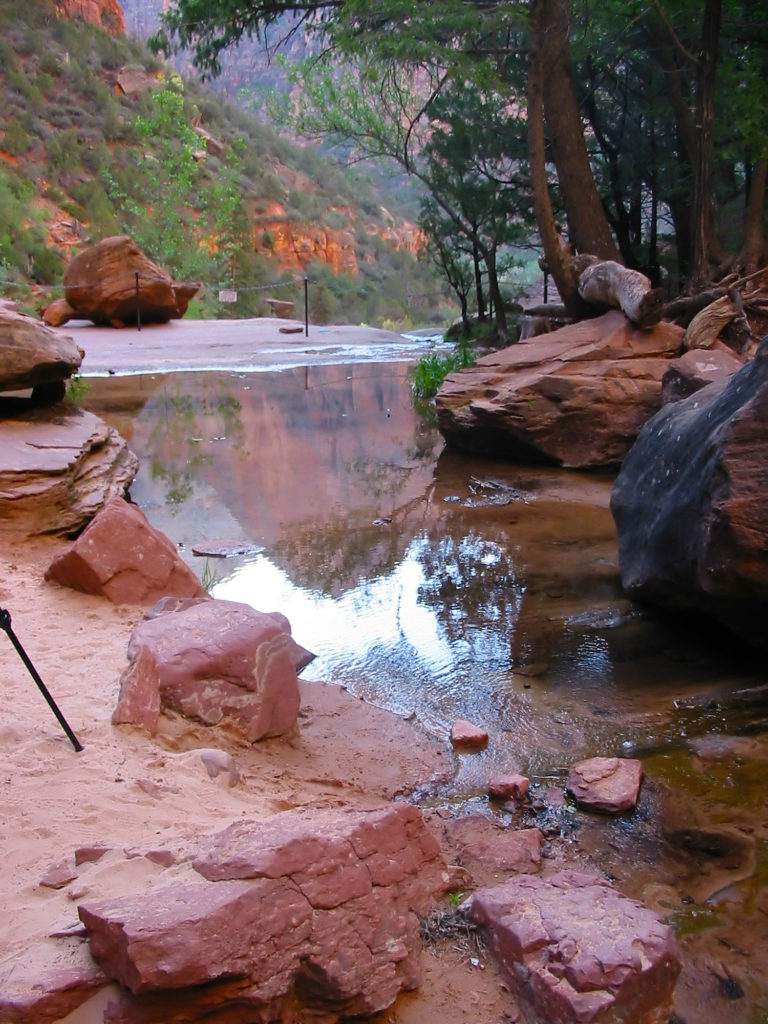 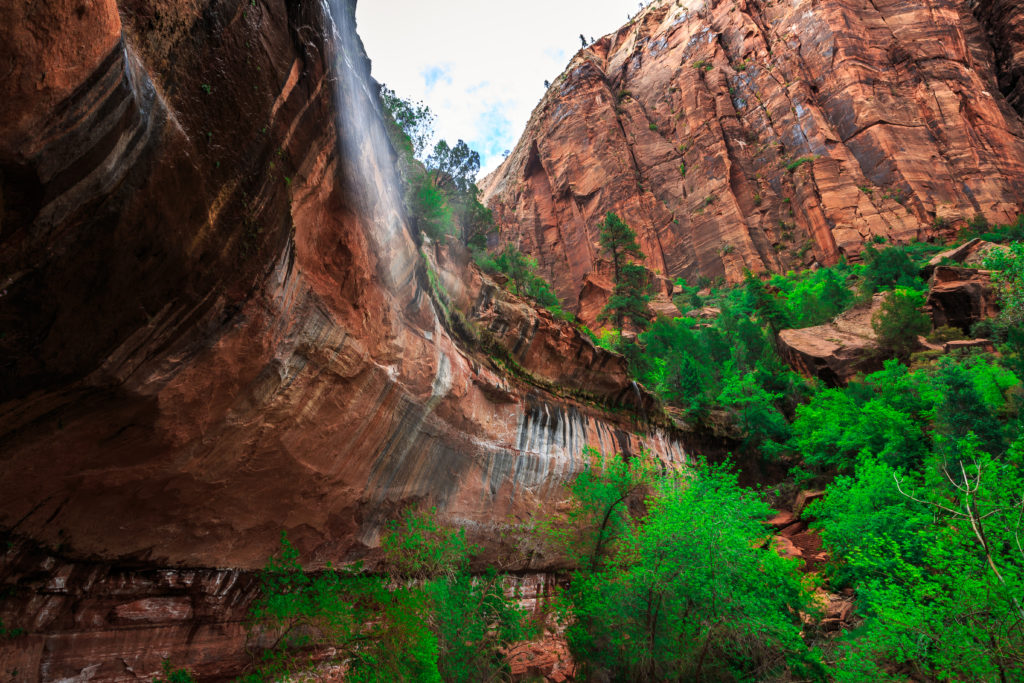 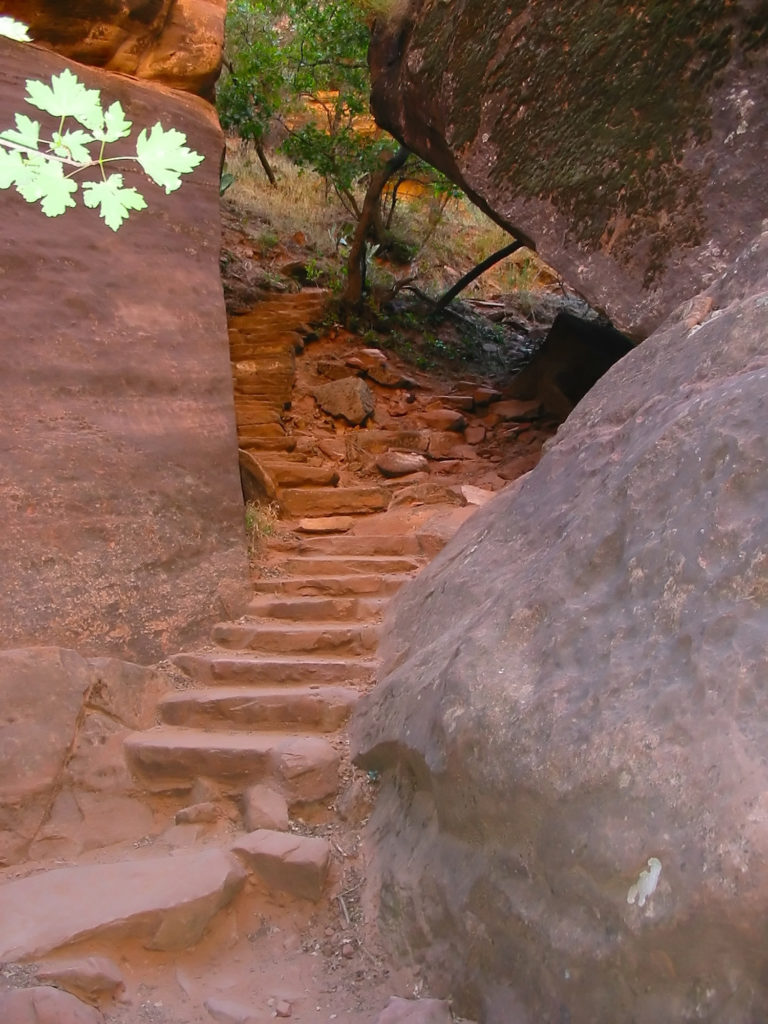