The ceremony was held to celebrate the grand opening of The Puppy Store, 1055 W. Red Cliffs Drive, and was attended by Washington City Mayor Ken Neilson as well as members of the Washington City Council and representatives from the St. George Area Chamber of Commerce.

The store opened its doors two weeks ago and the ribbon-cutting was an opportunity to reach out to the community and mark the store’s official launch, David Salinas, The Puppy Store manager, said.

“We are really excited that we had our ribbon-cutting ceremony today and are happy to be a part of this community,” Salinas said.

The ceremonies were held inside of the building while a protest was being held in the parking lot outside as approximately 10 individuals from several animal rights activist groups gathered.

Demonstrators from the Best Friends Animal Sanctuary in Kanab and the Southern Utah Animal Alliance attended; as well, the Humane Society of the United States was represented by deputy district leader for the organization, Laurie Nelson-Barker.

Supporting local animal shelters was the focus of the demonstration, including the Washington County Animal Shelter currently under construction, which, Barker said, is a “community endeavor.”

The demonstrators said they are concerned that the new store’s dogs may be coming from puppy mills. Buying from a pet store destroys promoted pet adoption from local shelters and thereby adds to the problem.

“We wanted to bring attention to the problem with pet stores first of all, because most people don’t realize that almost every animal and every puppy sold at a pet store comes from a puppy mill,” Barker said.

Barker also said that pet stores in general contribute to the overpopulation of animals in the U.S. and that if everyone bought an animal from a shelter instead of a pet store the problem would be solved.

Additionally, for every animal purchased in a store another is left to die in shelter, she said.

Salinas refuted the claim that his puppies are supplied by puppy mills. He was unable to find any federally licensed breeders in Utah, he said. So he contracted with several out-of-state breeders that are properly licensed and in compliance with the U.S. Department of Agriculture, which administers the licenses.

“I’ve met many breeders, and these people genuinely care for what they are producing, and they are hard working people who are making a living at it,” he said.

Salinas also said that the new store employs veterinarian technicians and qualified help to care for the animals who are all examined by a veterinarian several times before they are sold.

Salinas manages the Washington City store and owns others in California, he said, where three of the stores closed after city ordinances were passed that prohibited the sale of any dog, cat or rabbit that was not obtained from a public animal shelter or humane society organization.

He also said that a bill, designated as AB 485, proposed in the 2017-2018 session of the California Legislature would mandate those same restrictions statewide in California if passed. In part, that proposed legislation states:

This bill would prohibit, on and after July 1, 2018, a pet store operator from selling a live dog, cat, or rabbit in a pet store unless the dog, cat, or rabbit was obtained from a public animal control agency or shelter, society for the prevention of cruelty to animals shelter, humane society shelter, or nonprofit rescue or adoption organization that is in a cooperative agreement with at least one private or public shelter, as specified.

Las Vegas adopted a similar ordinance in January and joins more than 100 other communities across the U.S. that have enacted comparable bans, according to Best Friends Animal Society, which estimates that 10,000 licensed and unlicensed puppy mills are supplying animals to shops.

Salinas said that the city ordinances that are passing in California are closing pet stores, which include reputable businesses that care for animals.

Some individuals prefer to adopt an animal from a shelter while there are others who may want to purchase a puppy from a pet store, he said, but it’s a personal preference and should be the buyer’s choice.

Salinas also supports local shelters, adding that the Humane Society of the United States is trying to shut down all pet stores regardless of whether the store is reputable or not – or at least to make it illegal for any pet store to sell puppies.

There may be some truth to that statement.

According to a 2012 report released by the Humane Society, the organization is working to assist in passing local ordinances in various states to ban the sale of puppies in pet stores.

“Dozens of cities and counties across the country have passed these retail sales bans, further limiting the availability of pet stores to sell puppies,” the report stated.

“The Puppy Mills Campaign for the Humane Society of the United States is the largest, most aggressive, and most successful campaign fighting against the inhumane commercial dog breeding industry,” the organization stated, adding that the “campaign also recruits pet stores to sign a pledge not to sell puppies and encourages these stores to work with local shelters and rescue groups to encourage pet adoption.”

According to the the IRS, an organization does not qualify for nonprofit status “if a substantial part of its activities is attempting to influence legislation,” using an expenditure test that is then analyzed.

A federal court case decided in May determined, as stated in a ruling by Judge John A. Kronstadt, in part: “The HSUS is a lobbying organization. Its success is predicated on its ability to maintain and use relationships with lawmakers.”

“To show our care for animals,” Salinas said, “both the puppies from quality, licensed breeders and our shelter animals here, we donated a check for $1,000 to the local shelter during the ribbon cutting.”

There has been no communication between Salinas and the protesters at the writing of this report. 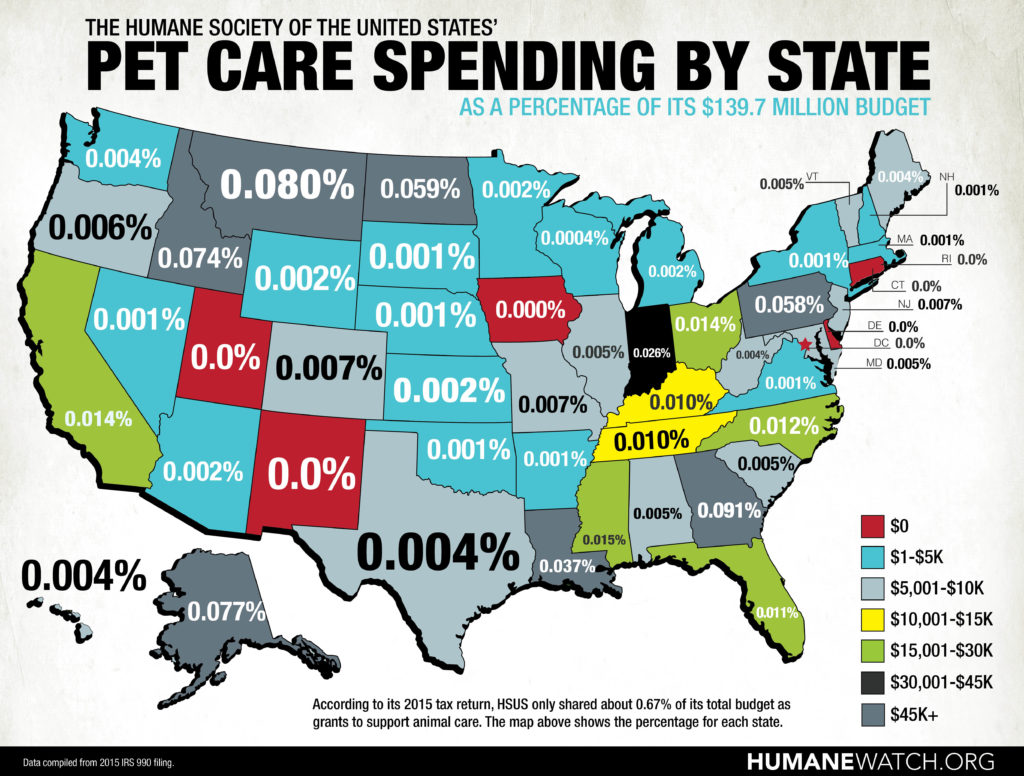 Total percentage of Human Society grants used in each state according to a 2015 IRS form 990 analysis by HumaneWatch, April 12, 2017 | Image courtesy of HumaneWatch.org, St. George News 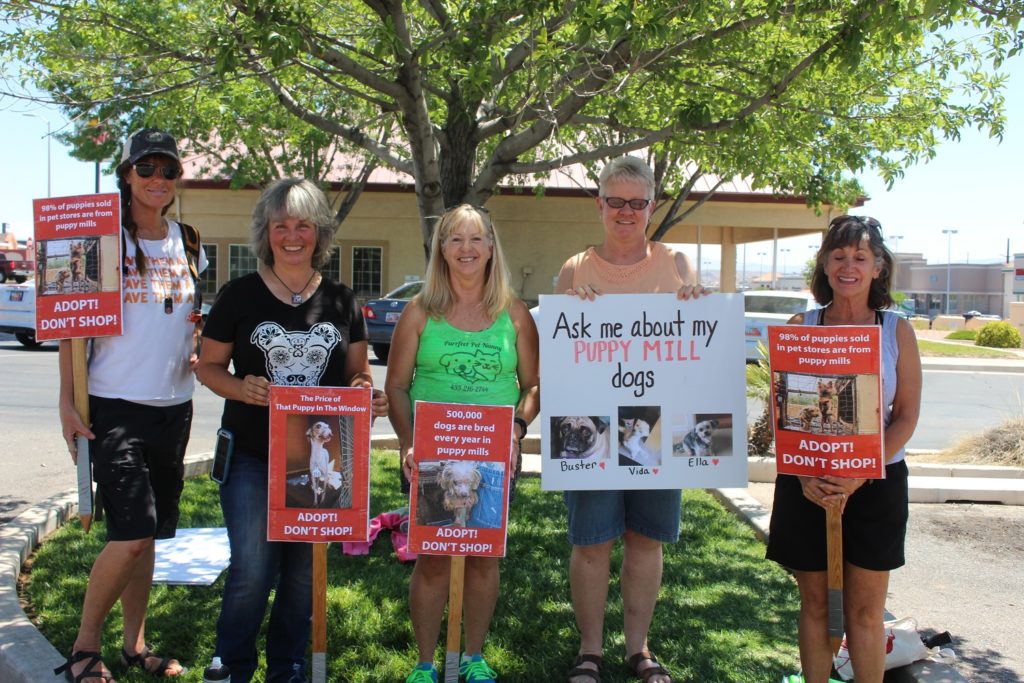 Here & there: Protests here, protests there