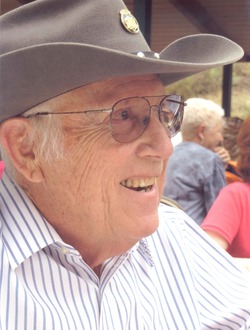 Ed passed away at 80 years old at home in St. George, Utah, on June 11, 2017, surrounded by his very loving wife Jean; sons: Mike,(Lynette) Ron, Rick, (Liz), Scot; and grandsons: Kendal, Tanner, and Step-grandson Tyler. Ed was born August 9, 1936 in View, Idaho, now Burley, Idaho. He graduated American Fork High, and attended BYU, BYU Extension Division, University of Utah Extension Division. He worked in television when he met the love of his life, Jean Hymas. They dated riding on his Harley Davidson Motorcycle, and after she graduated from high school they were married.

He worked for Sperry Rand helping design and build the nose-cone to the Sergeant Missile. After Sperry Rand became Univac he stayed there for a while until he was offered the job setting up an office for Emerson Electric Company in Ogden, Utah. Emerson moved the company back to St. Louis and wanted him to transfer there, however, he decided to raise his family in Utah. He started working for Utah State Dept. of Employment Security as a Systems Software Manager and retired after 27 years of service.

He was a Ham Radio Operator, he flew RC airplanes that he built from scratch, as well as building the control units. He was a private pilot and loved “To Soar Above The Clouds.” He enjoyed taking his boat mostly to Flaming Gorge fishing with buddies and sons.

He was a devoted husband to his wife, (ask anyone how many times he remodeled all the homes they lived in, and all the furniture he moved). During his early married life he took wood working classes and started building furniture for his wife. They would have been married for 60 years on Sept. 6 of this year.

Ed didn’t let the diagnoses of Lewy Body Dementia stop him and he has had a courageous battle with this disease.

He loved his boys dearly and would offer advice only if asked and never butted in to their lives. His sons have said that they know how to do so many things because their dad taught them how to have a good work ethic and how to do home repair and maintenance work themselves, including auto repair.

Ed is survived by his wife; sons; grandsons; adopted granddaughters; great-grandchildren; and his sister, Jeannine Clark, and her two sons, David and Brent. He was preceded in death by his parents, Virgil and Mable Smith; and grandson, Trent Michael Smith.

The family wishes to give their sincere love and thanks for their good neighbors who brought food to them, and the neighbors pulling weeds for them. To Applegate Home Health Care: Bob, his nurse for his very excellent care; Colton and Moira for their tender care bathing him; Taressa for his massage therapy; Laura, his social worker and Sherry, Applegate chaplain, for their support and love. Last but certainly not least, to his private CNA, Veda Steed, who helped above and beyond. Ed made her laugh a lot for the funny things he’d say to her. She has been a rock for his wife.

Please no flowers, instead do something nice for someone who needs it. Thank you to Metcalf Mortuary for helping us in this difficult and sad time.

Arrangements have been entrusted to the care of Metcalf Mortuary, 435-673-4221. For condolences, full obituary, and funeral listings please visit Metcalf Mortuary online.