ST. GEORGE — The St. George Police Department is requesting the public’s help in identifying the suspects caught on surveillance footage in three separate, unrelated crimes that occurred between November 2016 and April of this year.

Detectives are still seeking information that may help identify the individuals involved in the following crimes.

The first incident involves a fraud case from November 2016 where the individual shown in the footage wearing a black sweatshirt and black baseball cap allegedly used a stolen credit card to purchase merchandise.  Authorities are asking anyone with information to call 435-627-4330, and refer to incident No. 16P031245.

The second incident is a case from December 2016 involving a man who is wanted in connection with a vehicle burglary. He is shown wearing a gray hoodie and a baseball cap.

The man later attempted to return the items that were stolen out of a vehicle to Red Rock Bicycle Company on North Bluff Street where he was captured on surveillance footage. Anyone with information can call 435-627-4411 and refer to incident No. 16P032430.

The third suspect is wanted in connection with an incident that occurred April 4 where a customer unintentionally left his wallet at the USA Gasoline station on Sunset Boulevard, St. George Police Officer Lona Trombley said.

The suspect allegedly noticed the wallet lying on the counter and once the cashier became distracted the man was seen on surveillance footage placing the wallet in his pocket before leaving the store.

This report is based on preliminary information provided by law enforcement and may not contain the full scope of findings. 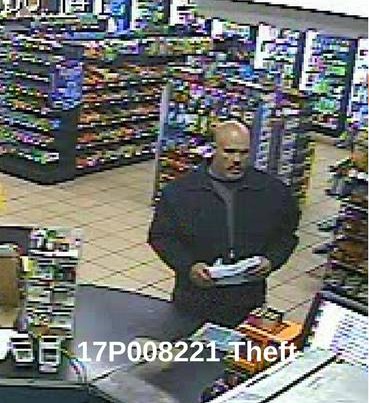 Police are seeking information on the man shown in the surveillance footage for allegedly stealing a wallet April 4, 2017 | Photo courtesy of Lona Trombley, St. George News 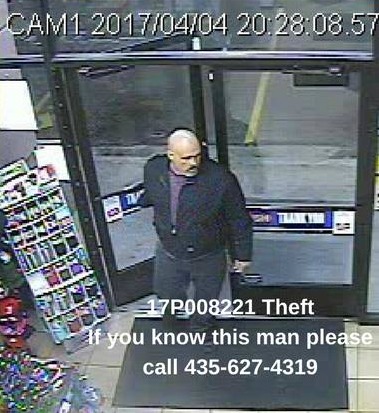 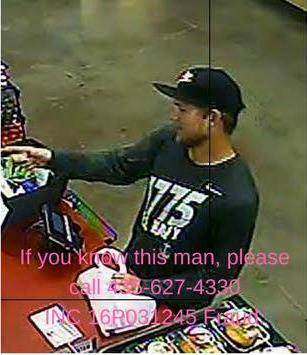 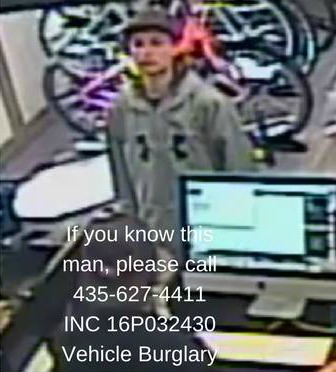 Police are seeking information on the suspect shown in connection with a vehicle burglary that was reported in December 2016 | Photo courtesy of Lona Trombley, St. George News

Do you recognize this person? Police ask public’s help in wallet theft case

Do you recognize this person? Community tips bring suspects to justice