ST. GEORGE — In a span of 24 hours, three Utah Highway Patrol cars were smashed during three separate crashes on Utah highways. Two of those crashes were caught on dashcam video released Monday by the Highway Patrol.

The series of crashes began in Washington County Saturday night when an intoxicated male driver, from Toquerville, crashed the car he was driving into the northbound Interstate 15 guardrail near milepost 13, according to a statement issued by the Utah Highway Patrol.

As a result of that crash, troopers blocked the interstate’s left lane of travel with emergency flares and flashing emergency lights, warning motorists of the collision and directing traffic into the right lane around the crash scene.

As the Toquerville driver was being arrested for suspicion of DUI at approximately 11 p.m., a St. George man driving a gray Ford Focus apparently missed the warnings, flares and emergency lights, drove directly through the lane closure and smashed into the back of a Highway Patrol vehicle, officials said.

Dashcam footage – which can be viewed in the media player above – shows emergency responders scramble as they narrowly escape being hit by the Ford while they were tending to the scene.

The trooper was out of his patrol car when it was struck by the Ford and no injuries were reported, according to UHP officials. The driver of the Ford Focus was arrested on DUI charges.

Later that night, a UHP trooper in Davis County had to use his patrol car to forcibly stop another intoxicated driver who was traveling in the wrong direction on I-15 near mile marker 329.

At approximately 2 a.m. Sunday, it was reported that the vehicle was driving south on I-15 in the northbound lanes of travel, officials said. A trooper, who was positioned south of the reported location, was able to alert northbound motorists of the emergency situation by performing a traffic slowdown.

The wrong-way vehicle was observed colliding with the center barrier on the interstate, but the driver wasn’t deterred. As the trooper was heading to the crash, he noticed the vehicle continuing on in the wrong direction, according to the Highway Patrol.

In response, the trooper slowed his vehicle and, as the wrong-way driver approached, the trooper hit the driver’s vehicle on the driver’s side rear-panel, causing the vehicle to spin around and become disabled. Dashcam video in the media player above shows the trooper’s perspective as he executes the PIT maneuver – a law enforcement precision immobilization or pursuit intervention technique.

Officials said no injuries were reported during the ordeal, and that the wrong-way driver was arrested for suspicion of DUI.

Later Sunday, another UHP trooper was providing traffic control for a fully-engulfed vehicle fire on Interstate 84 near milepost 34 in Box Elder County.

While closing the right lane of travel, a semitractor-trailer entered into the closed lane and right shoulder of the interstate, subsequently crushing the rear of the trooper’s patrol car and narrowly missing a fire truck on scene, UHP officials said.

The trooper, who was outside of his vehicle, was able to move out of the way and was not injured. However, authorities said a Box Elder firefighter was transported to a nearby hospital with a possible broken ankle sustained as a result of the crash.

Two days earlier in a nearby area, a Utah Highway Patrol trooper, assisting on a report of a low-hanging power line, was left in “extremely critical condition” after being struck by a sedan. UHP Trooper Eric Ellsworth had responded to the area at approximately 9:45 p.m. Friday.

Ellsworth was waiting for a power company crew to respond when he stepped out of his patrol car to alert the driver of an approaching semi of the sagging power line. While doing so, the trooper was struck by a 16-year-old girl driving a 2006 Chevy sedan.

Ellsworth was transported to a hospital in Bear River with life-threatening injuries before being flown to Intermountain Medical Center in Murray. Officials said there were no signs of impairment or distraction from the girl driving the sedan. 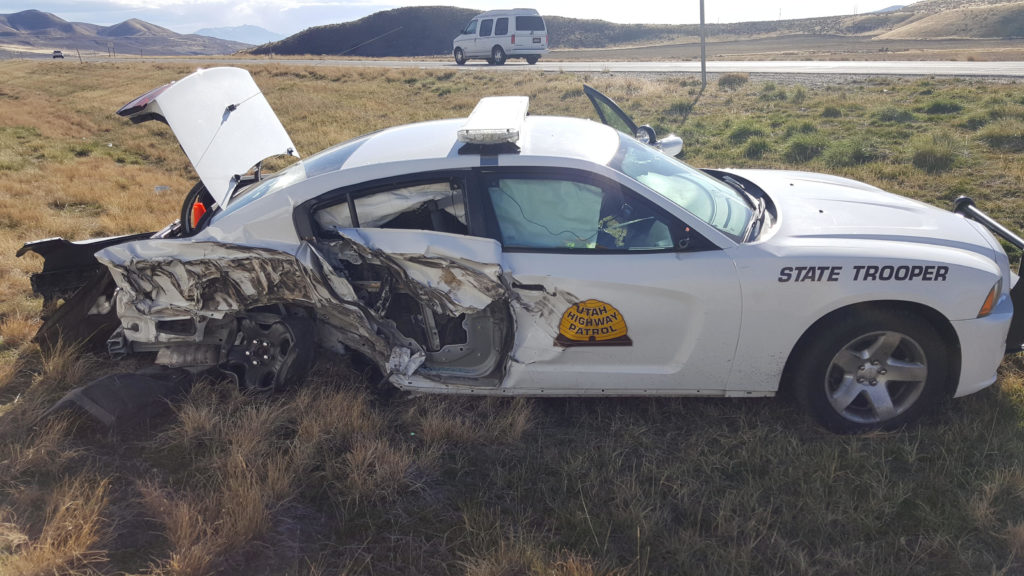 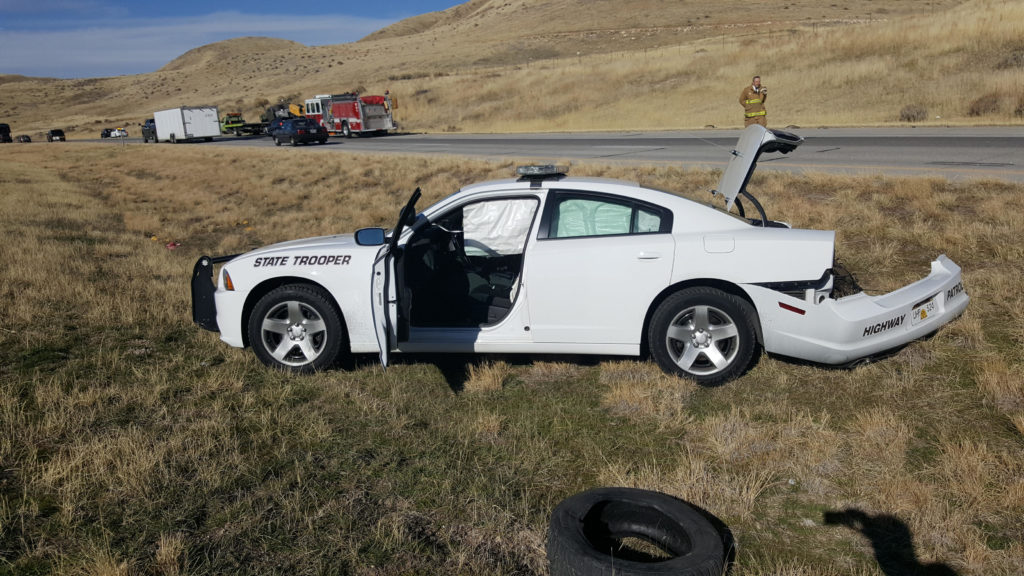 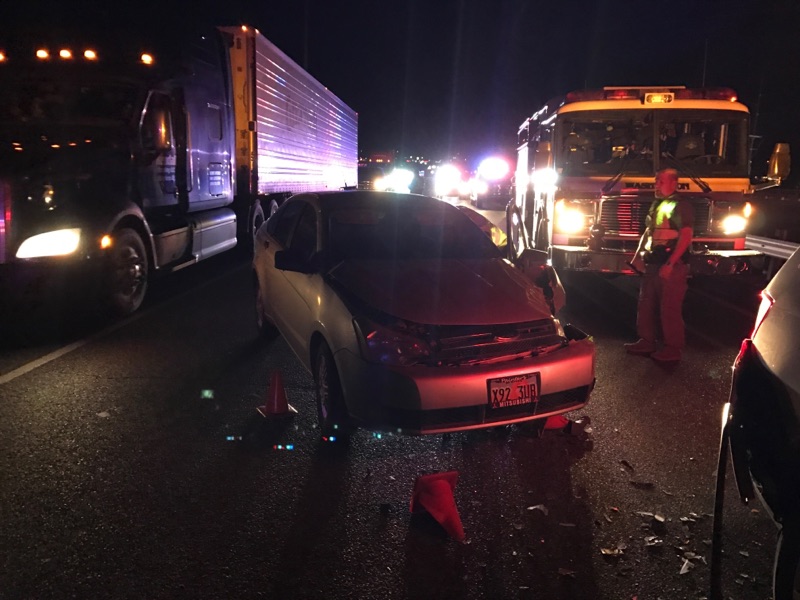 While tending to the scene of a DUI crash, a UHP patrol vehicle is struck by a Ford Focus driven by a St. George man on Interstate 15 near milepost 13, Washington County, Utah, Nov. 20, 2016 | Photo courtesy of the Utah Highway Patrol, St. George News

A UHP trooper in uses his patrol car to forcibly stop an intoxicated driver who was traveling in the wrong direction on Interstate 15 near mile marker 329, Davis County, Utah, Nov. 21, 2016 | Photo courtesy of the Utah Highway Patrol, St. George News 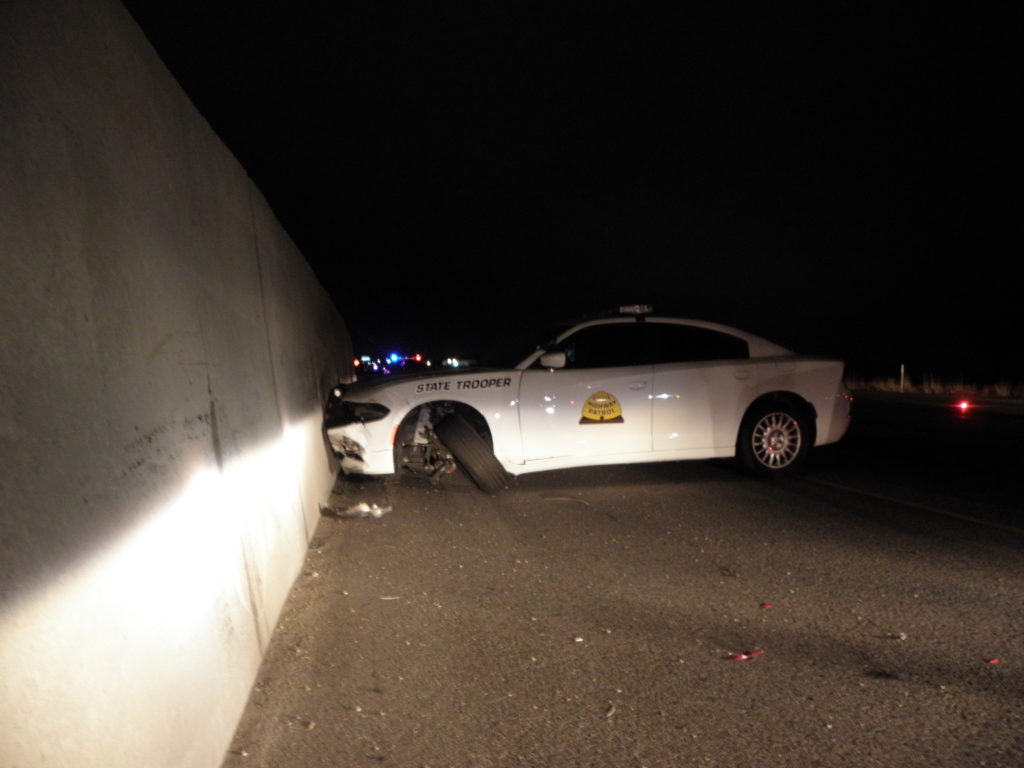 A UHP trooper in uses his patrol car to forcibly stop an intoxicated driver who was traveling in the wrong direction on Interstate 15 near mile marker 329, Davis County, Utah, Nov. 21, 2016 | Photo courtesy of the Utah Highway Patrol, St. George News

Updated: Minnesota man leads police on high-speed chase because he "wanted his freedom"

'I felt real big': Southern Utah man celebrates his 93rd birthday back in the saddle again