HURRICANE – Dairy Queen is usually a popular place to be in Hurricane but it was busier than ever Tuesday. That’s because the restaurant was holding a fundraiser for the family of 15-year-old Pierce Adamson, whose tragic death July 3 rattled the community, but also united it.

Adamson, who would have been a sophomore at Hurricane High School this fall, strived to make others feel special, his mother, Derena, and older sister, Courtney Prince, said at his funeral last Friday. He was the kind of person that made everyone feel like he or she was his best friend, his father, Jeff, a teacher at the high school, said.

At the funeral, Prince told of a time she went shopping with her brother and pointed at some things she said she would like to have. A little while later he bought her those things, with his own money.

His mother told a story of him wanting to give roses to girls at school on Valentine’s Day. What was originally planned as a single rose turned into three dozen. Derena Adamson said her son text messaged her after giving the roses to those lucky young women, saying, “I made six girls cry today – but in a good way.”

The funeral’s first speaker, Wayne Walters, a cousin, said Pierce was the kind of young man all parents hoped their daughter would marry.

Pierce’s selfless actions and the fond remembrances of those actions led to the creation of the hashtags, #livelikepierce and #18livelikepierce. The numeral 18 refers to the number he wore while playing the three sports he loved, football, basketball and baseball.

The hashtag, #18livelikepierce, will be emblazoned on the back of each helmet worn by players participating in youth football sponsored by Hurricane City.

The hashtag “livelikepierce has found its way on wrist bands being sold to raise money to help Pierce’s family. These are only two of many things done throughout the community in honor of Pierce since his passing.

Hurricane High School Principal Jody Rich text messaged students and got many of them together in remembrance of Pierce only hours after his death.

The next day, which happened to be the 4th of July, there was a well-attended balloon launch (all of them red – his favorite color) and vigil held in his honor on the high school field. Those in the Adamson’s neighborhood left their 4th of July flags up and tied red bows to those flagpoles as well as power poles and other spots of high-visibility to honor Pierce.

Mourners and well-wishers from the community flocked to pay their respects to Pierce and his family at a viewing Thursday evening. A line of people snaked through every room in the small mortuary building, reaching 25 feet out the door.

Pierce, a member of The Church of Jesus Christ of Latter-day Saints, was honored Friday morning with handmade posters created by the young women of his LDS Ward. Signs for Pierce greeted neighbors and friends traveling to his funeral along every cross street on 180 West and 650 South in Hurricane.

At the funeral, which was held at the Hurricane LDS Stake Center, it was standing room only as classmates and friends came out in force to honor and celebrate a life well lived. Members of Pierce’s baseball team were wearing their gray and red baseball jerseys over their Sunday best in his honor.

At the funeral, both Derena and Jeff Adamson thanked the community for its outpouring of love and support, saying they were overwhelmed by the kindness shown in their behalf since their son’s passing. A flood of condolences and tributes were posted to their Facebook timelines and a steady stream of concerned visitor’s have messaged the couple since their son’s death.

Both Jeff Adamson and Walters told the funeral audience how much Pierce loved Hurricane as a community and how much he enjoyed being a Hurricane Tiger. Appropriately, the inside of his casket bore the Hurricane Tiger logo and the number 18.

Speaking directly to his son’s teammates, Jeff Adamson said his son would continue to inspire them and that they needed to live so he could inspire them. Derena Adamson echoed her husband’s sentiment, saying the hashtag should perhaps read, “Live to be with Pierce.” Both parents said they know where their son is now and they, themselves, will live so they can be with him again.

The show of support from Pierce’s classmates was evident Tuesday as they helped serve the extra Blizzards and other sweet treats sold by Dairy Queen employees. A dollar from the proceeds of each Blizzard sold was donated by the Hurricane Dairy Queen to the Adamson family.

In addition to the wrist bands and the DQ Blizzard bonanza, community members can also order T-shirts bearing Pierce’s name, the number 18 and the hashtag #livelikepierce, Proceeds will benefit the Adamson family. The T-shirts are $10 and can be ordered Thursday and Friday at Hurricane High School, 345 West Tiger Blvd., from 9 a.m. to noon, or by contacting Sara Hirschi at 435-680-5906 or [email protected]. 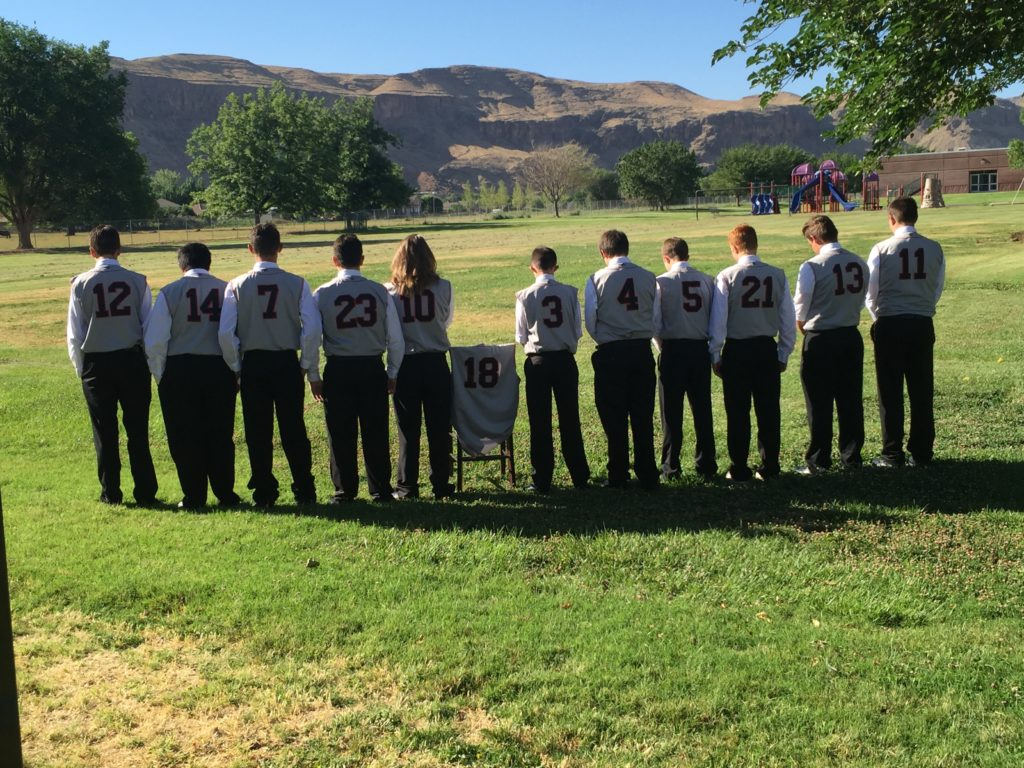 Pierce's baseball teammates honored him at the funeral by wearing their jerseys over their Sunday best, July 8, 2016 | photo courtesy of Brittany Hatch 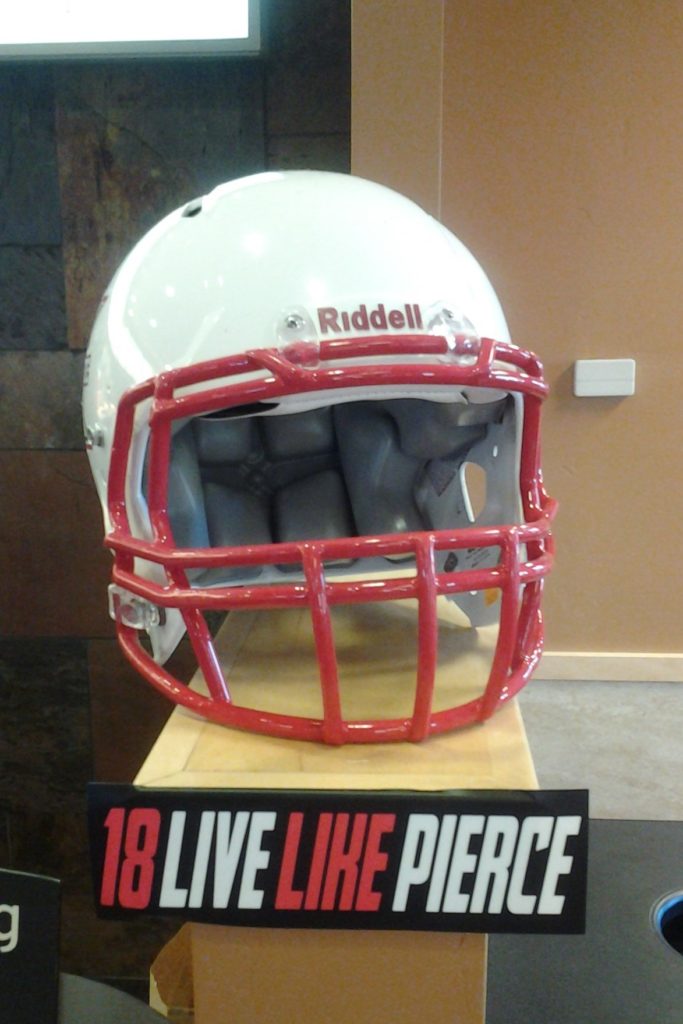 A Hurricane City Recreation football helmet with the hashtag #livelikepierce greeted those purchasing Blizzards at the Hurricane Dairy Queen Tuesday as part of a fundraiser for the Adamson family, July 12, 2016 | Reuben Wadsworth, St. George News 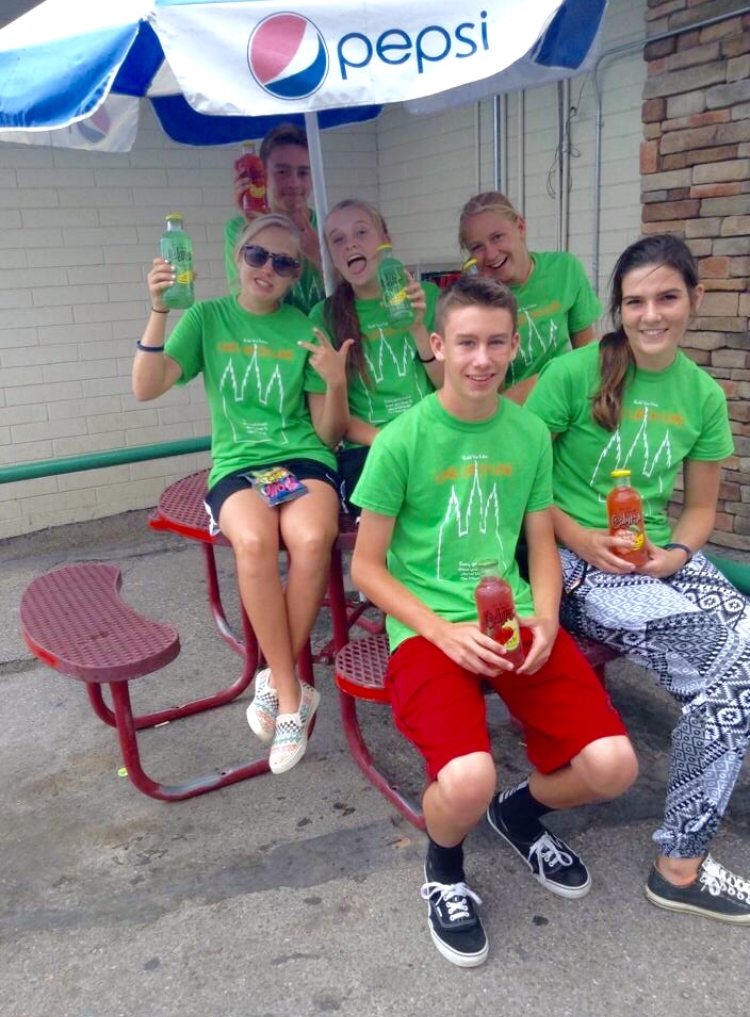 Pierce Adamson poses with other youth from his LDS Ward at Youth Conference, July 2015 | photo courtesy of Kayley Wilson 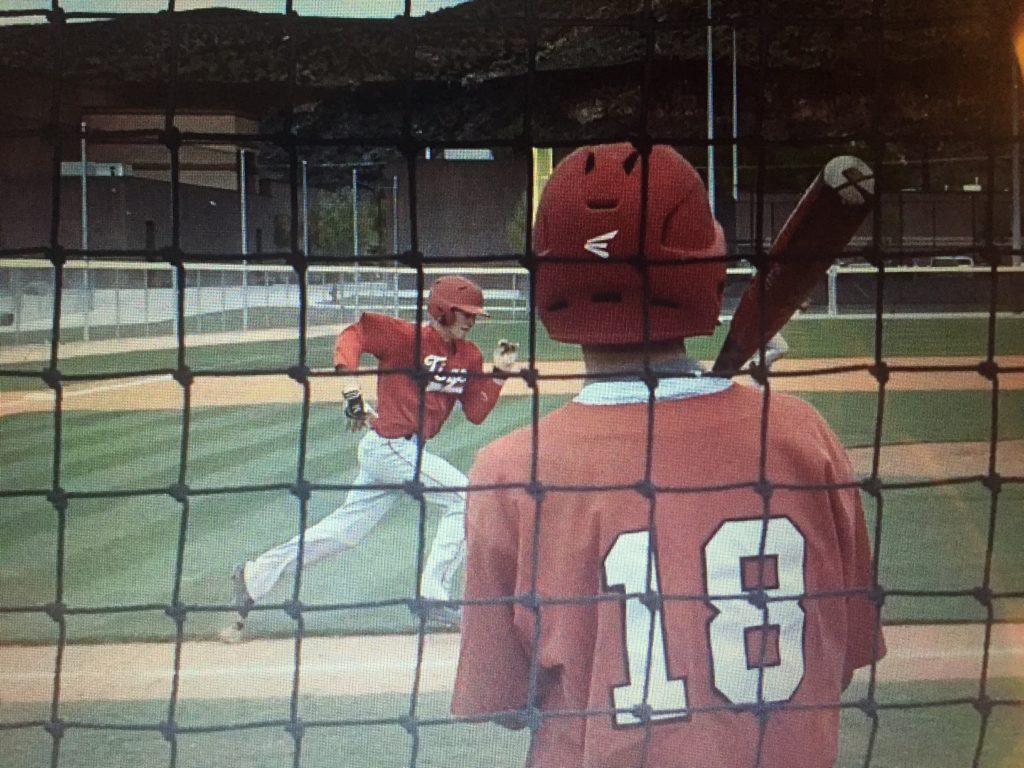 Pierce Adamson sporting number 18 on his baseball jersey. His 16th birthday would have been July 18, date unspecified | photo courtesy of Sara Hirschi 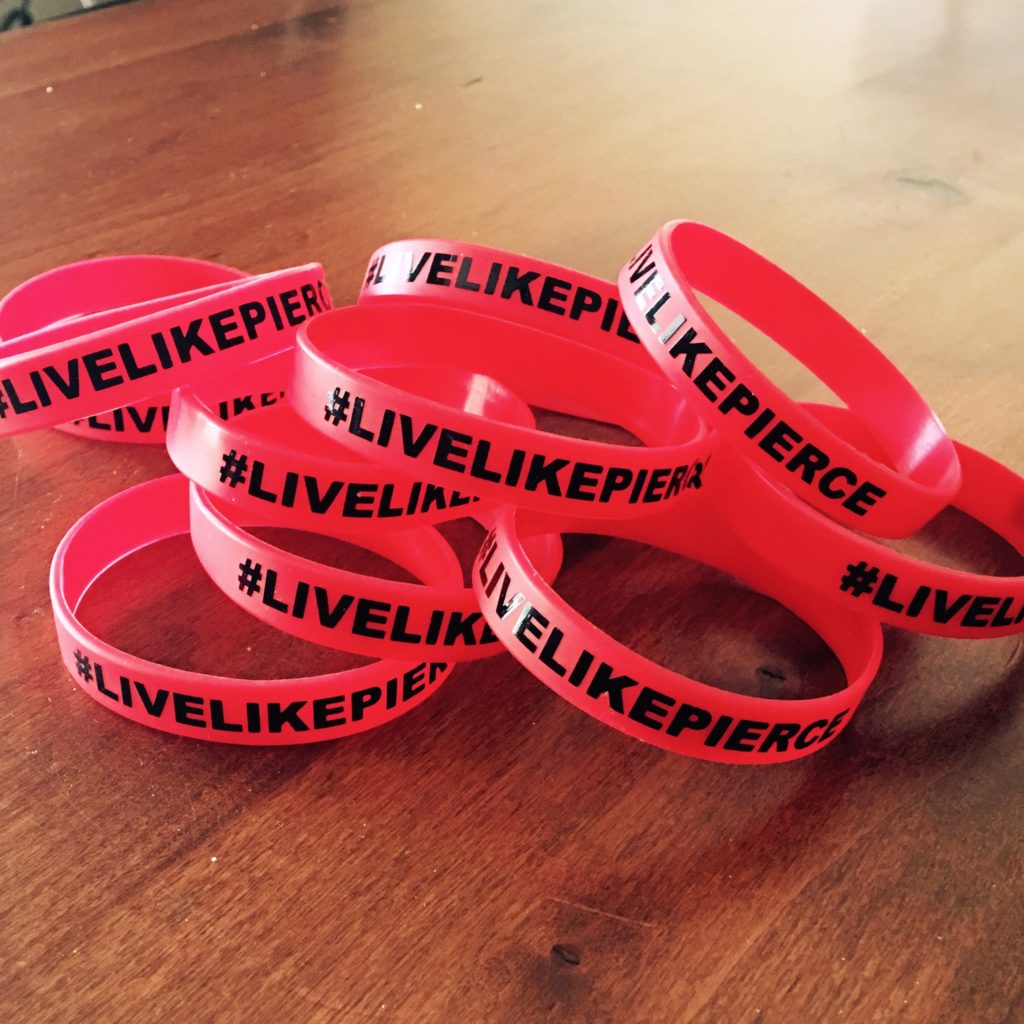 These wrist bands, bearing the hashtag #livelikepierce, have been sold as part of a fundraiser to help his family, date unspecified | photo courtesy of Amy Barney 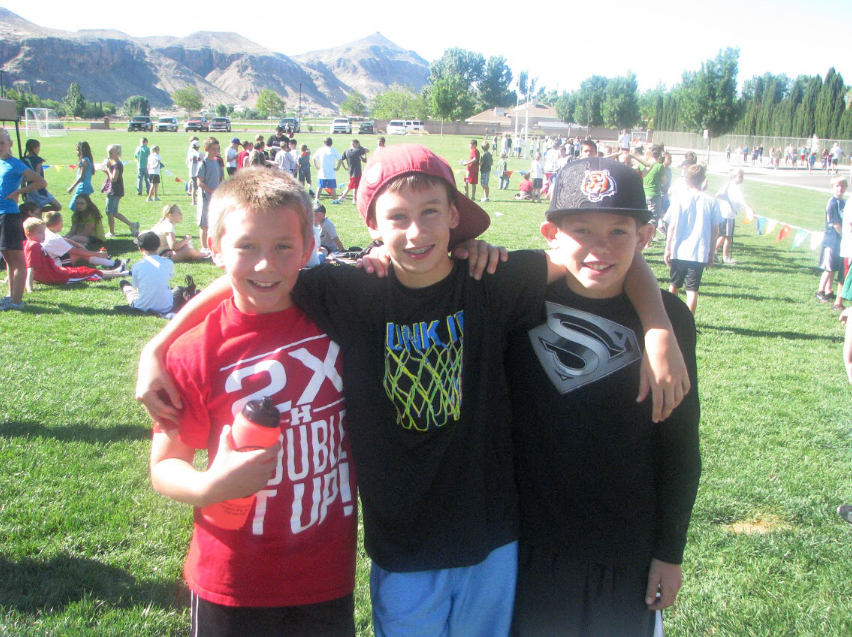 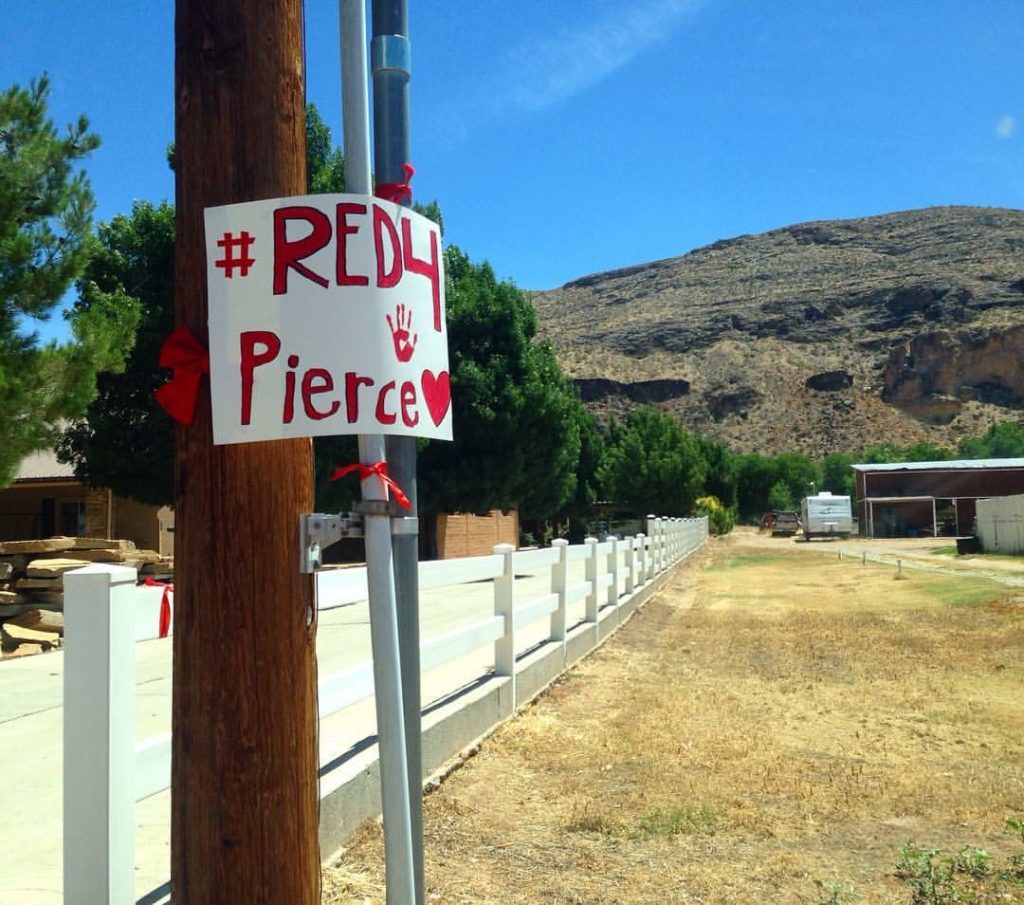 Signs and red ribbons were hung to honor Pierce in the week after his death, especially in his neighborhood along 180 West, July 9, 2016 | Photo courtesy of Amy Barney 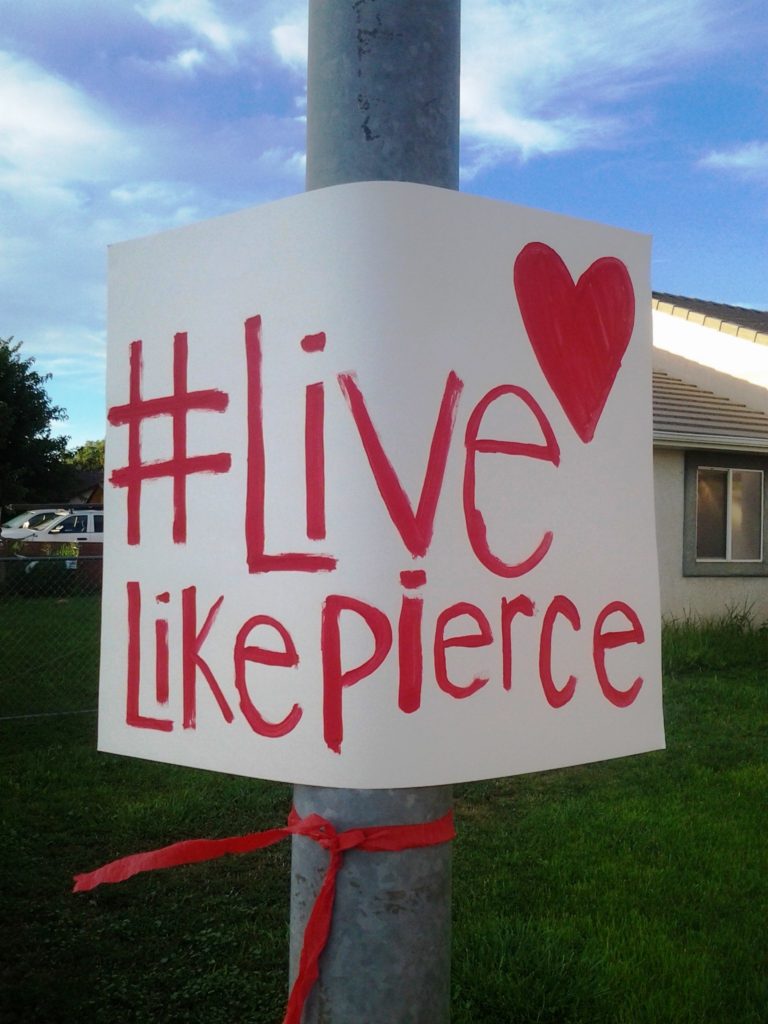 Signs and red ribbons were hung to honor Pierce in the week after his death, especially in his neighborhood along 180 West, July 9, 2016 | Photo by Reuben Wadsworth, St. George News 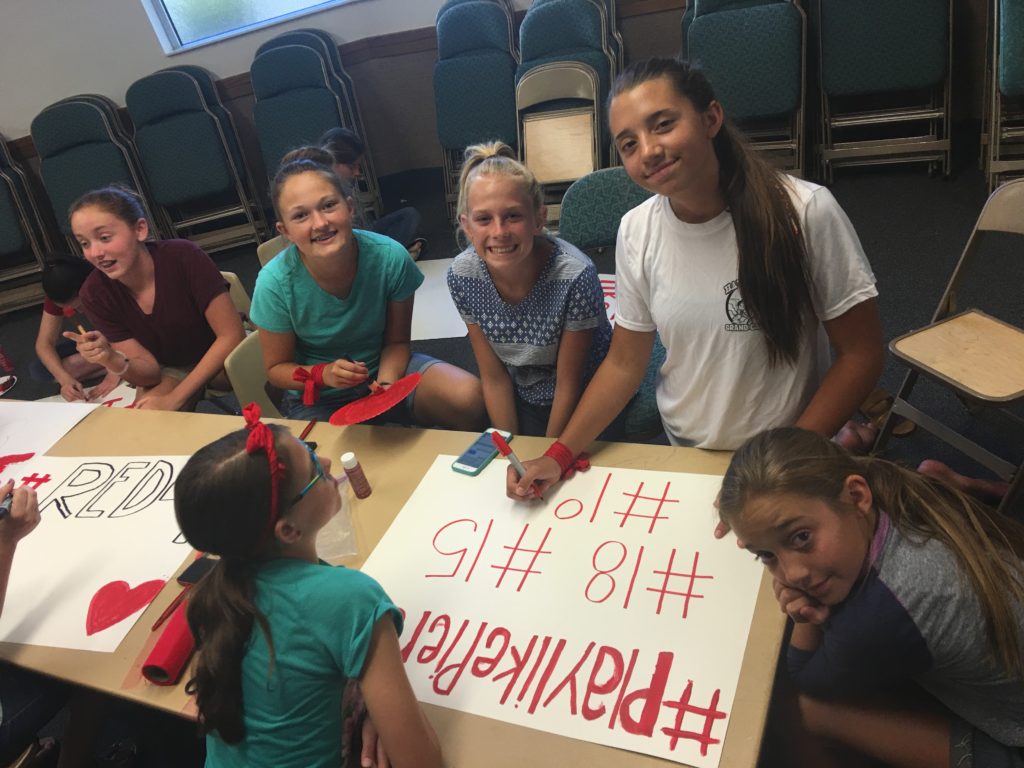 A vigil and balloon launch was held in Pierce's honor on the Hurricane High School football field on July 4, 2016 | Photo courtesy of Brittany Hatch