ST. GEORGE — A solitary figure with a thick beard and wearing a black cowboy hat stands in protest Tuesday in front of the St. George BLM offices on East Riverside Drive. His name is Will Lehman. He began his vigil at midnight and will end it tomorrow at midnight.

Lehman spent the night in his sleeping bag on a lawn chair with a tarp pulled over himself to keep out the dew, in temperatures so cold Monday night, he said his hands were shaking when the sun came up. Multiple thermoses of coffee stand beside his makeshift bed. He has invited no one else to join him.

Lehman is at the BLM offices to protest the death of LaVoy Finicum. While he said he does not condone the seizure of the Malheur Wildlife Refuge, he said the death of Finicum was an injustice he cannot abide.

He made clear that he has no issue with the local BLM or the people who work there, but only wants to make a stand against what he believes is an unnecessary death.

Finicum was shot and killed by the Oregon State Police during an attempt to arrest several members of the armed occupation. The FBI video of the shooting has generated considerable controversy from both those who support the occupiers and those who support the state and federal officials involved.

Lehman has spoken with several BLM employees and found them to be understanding of why he chose to hold a vigil.

“They’ve been courteous and they respect my right to exercise my first amendment right to hold this vigil,” Lehman said. “They understand why I’m upset and what I think needs to be done. I’ve had no problem with them whatsoever.”

“I wanted to make the statement — I am peacefully assembled … here on BLM land,” he said.

Discussing his vigil, Lehman grew quiet and apologized for his obvious emotions. Tears came to his eyes and he took a moment to compose himself.

“You’ll have to excuse me, I’m a little upset,” Lehman said. “I have been for days.”

There needs to be a non-partisan, independent, thorough investigation into the shooting death of LaVoy Finicum, Lehman said.

“I’ve reviewed the tapes from the FBI … they shot a man with his hands up,” Lehman said. “The man (Finicum) wasn’t right — I don’t think his actions were right — but if we allow the government to execute people, to punish them on the side of the road … who’s next?”

While the actions of those who took over the Malheur Wildlife Refuge were misguided, Lehman said, they still had the right to exercise both their first and second amendment rights.

“As far as I can tell, everything I’ve read and everything I’ve seen there were no overt acts that would justify what happened up there … it didn’t need to come to this,” he said. “This is America, we’re not the third world, we’re not the old Soviet Union. LaVoy was in town, several times, talking to the sheriff, unarmed. They were going to a meeting in another town … I believe that if they’d been handed a warrant, they would have surrendered.”

“When law enforcement takes it upon themselves to punish people, we’re in trouble,” he added.

The standoff continues in Oregon, with four remaining protestors approaching day 40 of the occupation. The takeover began in early January when a group of protesters, which included Ammon Bundy, began occupying the Malheur Wildlife Refuge offices near Burns, Oregon. 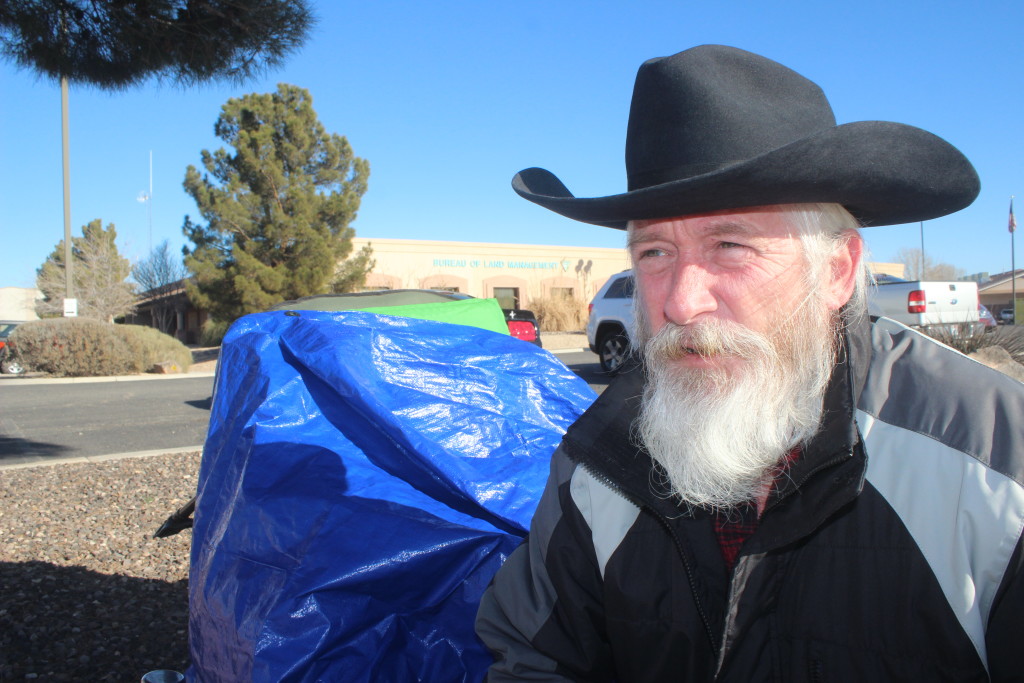 Will Lehman is holding a 24-hour vigil in the memory of LaVoy Finicum in front of the St. George BLM offices on E. Riverside Drive on Feb. 9. 2016 | Photo by Sheldon Demke, St. George News 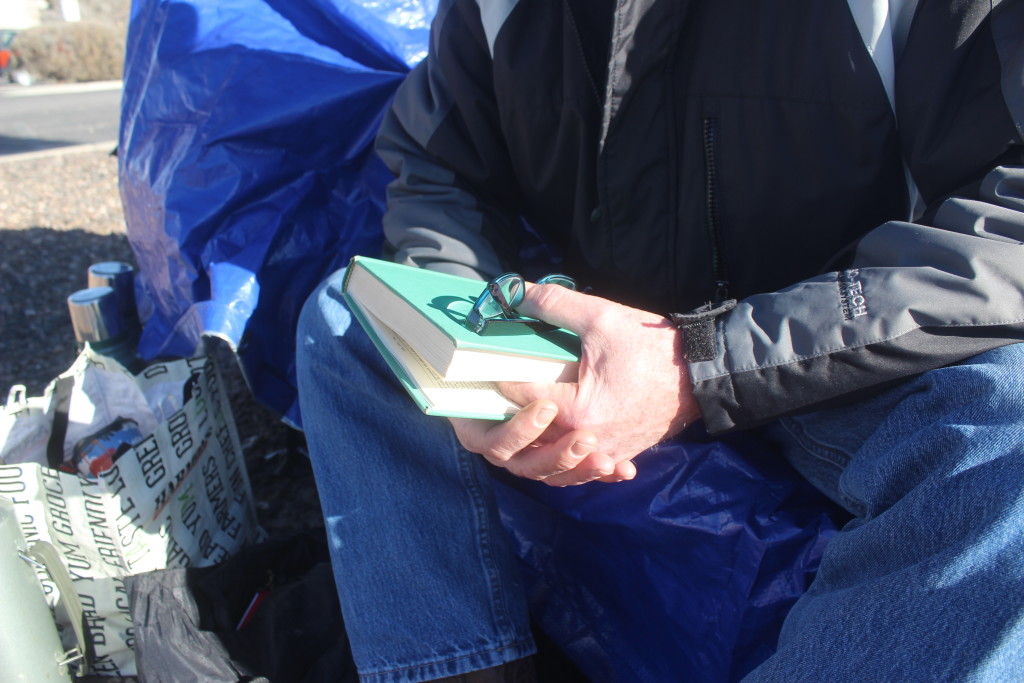 Will Lehman holds a book while discussing his decision to remain in front of the the St. George BLM offices on Feb. 9, 2016 | Photo by Sheldon Demke 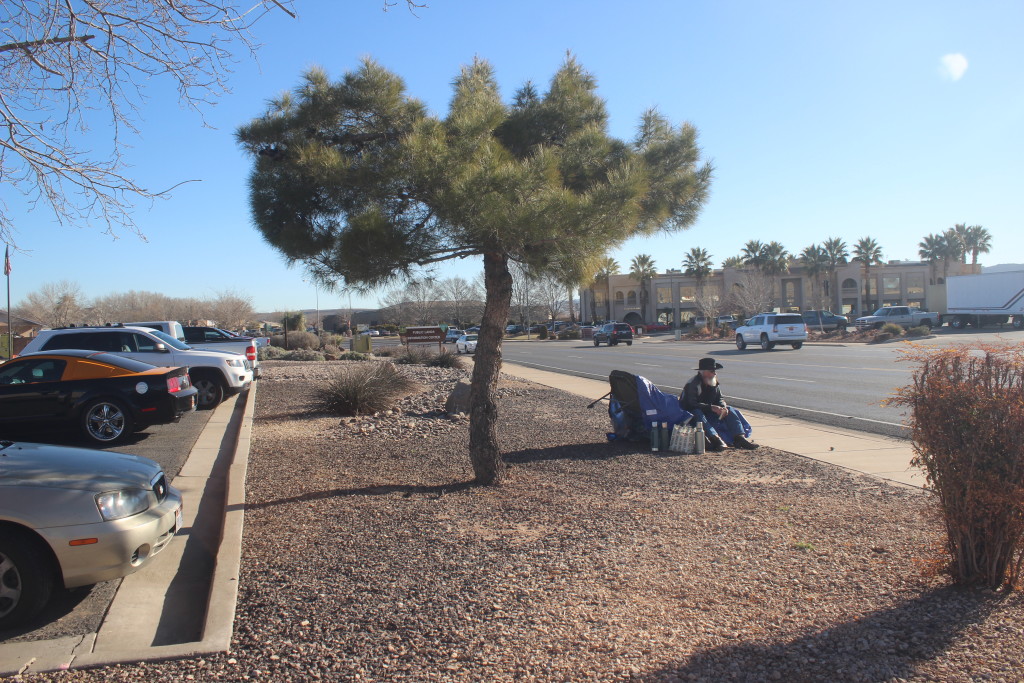 In response to the 'Trump Train,' cars 'Rally for our Future' in support of Biden

Did you get it? State sends first COVID-19 Wireless Emergency Alert