HURRICANE – As far as bounce-back games, this was as good as it gets for the Dixie Flyers.

Dixie rebounded from its sole loss in region to convincingly defeat Hurricane at Tigers Stadium, 48-7.

“We played our most complete game of the season,” said Dixie head coach Andy Stokes. “I challenged our kids to do their assignments for their teammates so that everyone could enjoy success. They rose to the occasion tonight.”

“We wanted to let Zac know that we had confidence in him,” said Stokes. “His passes were more crisp tonight. He had a great game.”

Harrah took the opening drive 61 yards. He found receiver Jaden Harrison for a 21-yard strike to put the Flyers up 7-0 with 8:55 remaining in the first.

After the Tigers turned their first possession over on downs, Harrah drove the Flyers 67 yards on their nest possession. This drive ended at the beginning of the second quarter with a 4-yard TD dive from Tre Miller.

On the Tigers first play on their next possession, quarterback Josh Parker was intercepted by Dixie linebacker Malachi Fakahua. Fakahua returned the ball 35 yards for a score, but a block in the back nullified the touchdown.

“Our coaches told me this week that when we were in man-to-man that their running back liked to slip out of the backfield,” said Fakahua. “I read that and slid under him to get the pass.”

The Flyers had the ball in excellent field position at the Tigers 27-yard line. Four plays later, Harrah faked a handoff to Miller then flew around the right side untouched to the end zone from 8-yards out. With just over 10 minutes remaining in the first half, the Flyers led 21-0.

It only got worse for Hurricane as the Tigers turned the ball over again on their next possession. This time Jaden Harrison jumped up to intercept Parker’s long pass at the Dixie 28-yard line.

On Dixie’s next possession, Harrah had his first miscue. After scrambling to his right, he was intercepted on a great catch from the Tigers Nick McDaniel. The Tigers could not capitalize however. Parker was sacked and lost control of the ball. Dixie defensive end Tyson Fisher scooped up the ball and raced 30 yards the other direction for a defensive touchdown. The PAT attempt was not good, but with 3:28 to go in the first half, the Dixie lead climbed to 27-0.

“Against the Hurricane offense, your defensive front seven has to play great,” said Stokes. “Our front seven not only stopped their running attack, but got great pressure on their quarterback all night.”

The first punt of the night came on Hurricane’s next possession. Dixie took over at the 29-yard line. And with only 22 seconds showing on the clock in the second quarter, Harrah found Hobbs Nyberg for a 38-yard strike to push the Dixie lead to an insurmountable 34-0.

Hurricane finally got on the board in the third quarter. Nick McDaniel scored on a 2-yard burst to pull the Tigers to 34-7. The touchdown was set up on a long pass from Parker to Kirt McDaniel.

In the beginning of the fourth quarter Harrison got his second touchdown reception, this time from 20-yards out at the 11:19 mark. The final score of the game came from backup running back Alex Martinez. The Dixie favorite ran around right end from 2-yards out to score with a minute showing on the clock.

“Alex does not play much, but he is the most vocal supporter on our sideline,” said Harrah. “That is why he got the loudest cheer tonight. We are all happy for him.”

Miller led the Flyers in rushing with 135 yards on 24 carries. Nick McDaniel had 35 yards on six carries for the Tigers.

Kirt McDaniel led all players with five catches for 86 yards for Hurricane. Bret Barben and Jaden Harrison had four and three catches, respectively, for 61 and 51 yards.

Dixie improves to 6-2 overall and remains atop the region standings with Desert Hills at 3-1. The Flyers have a bye next week before hosting Pine View in the season finale on Oct. 23.

Hurricane drops to 4-3 overall, with a 2-2 record in the 3AA South Region. The Tigers will also have next week off before traveling to Snow Canyon on Oct. 23. 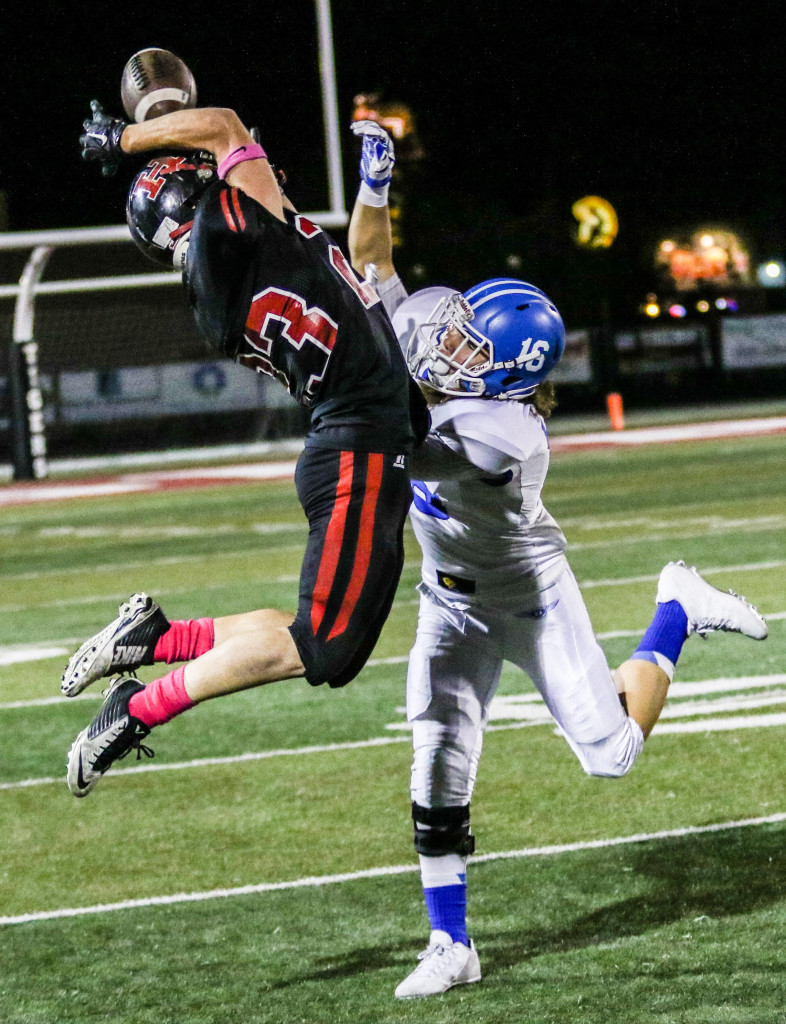 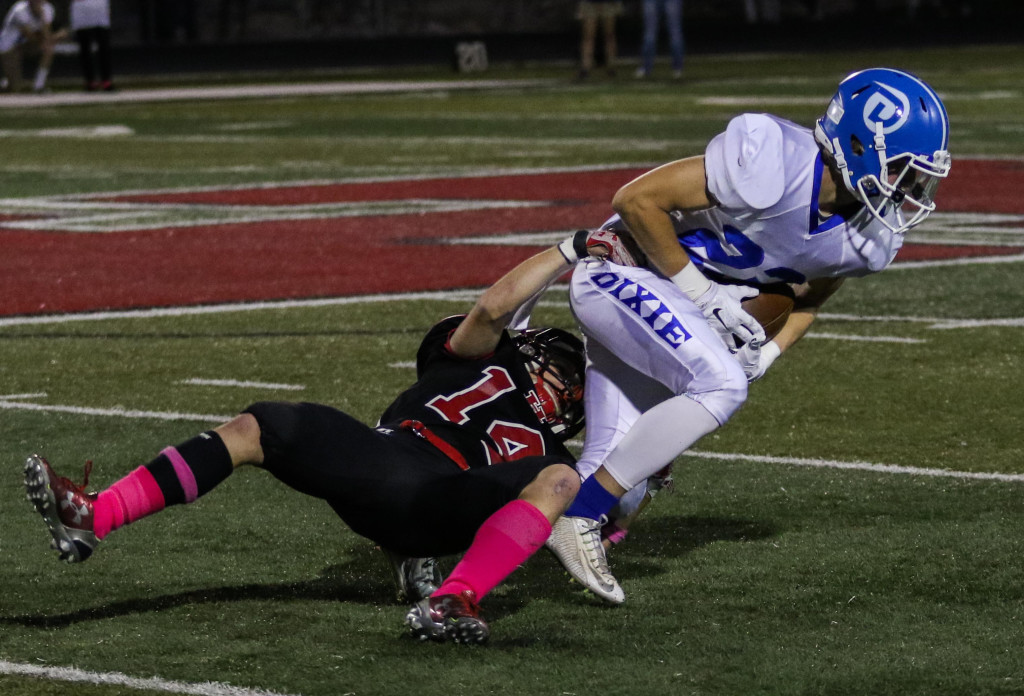 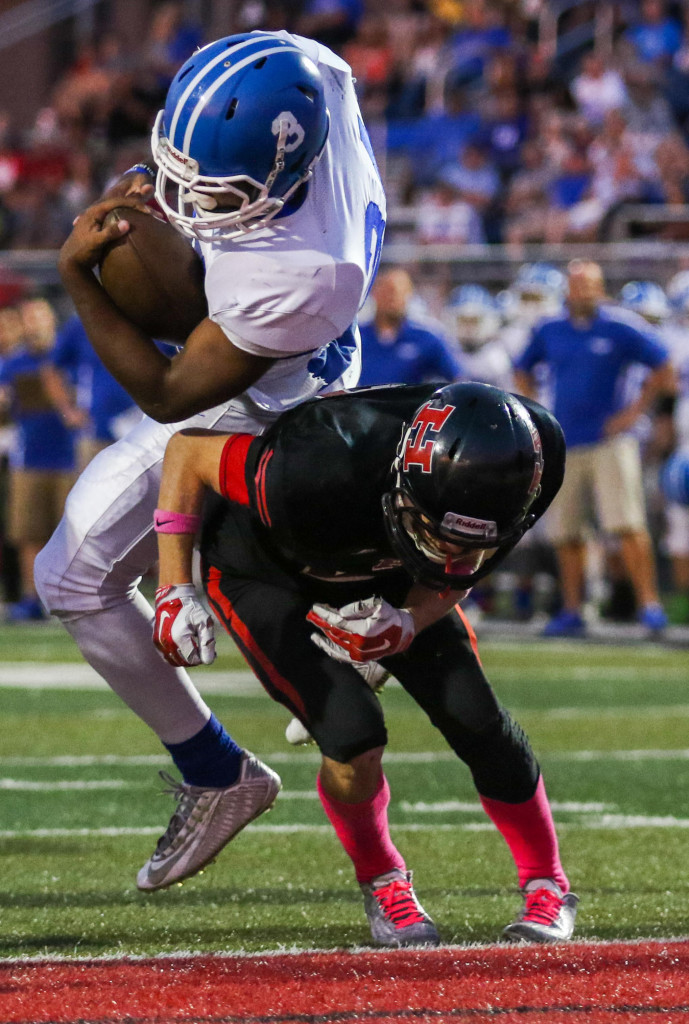 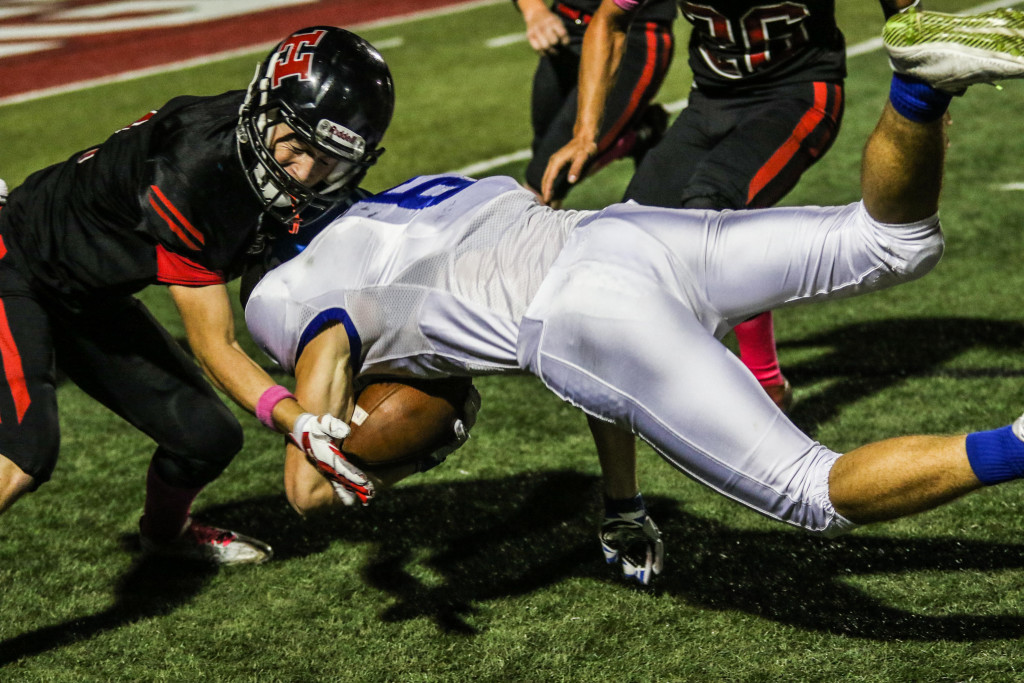 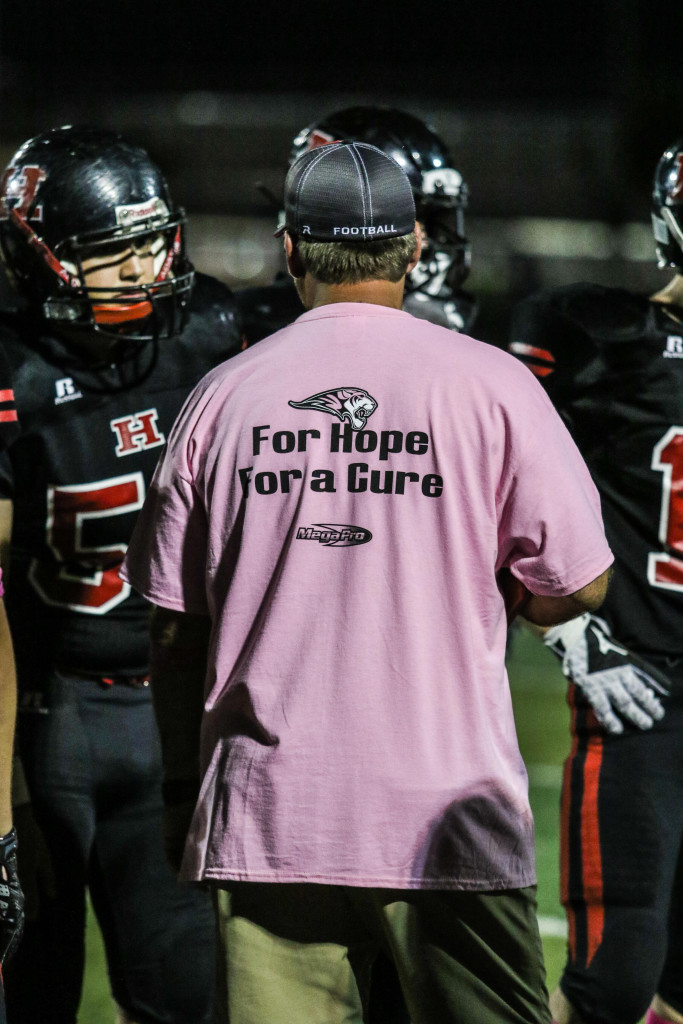 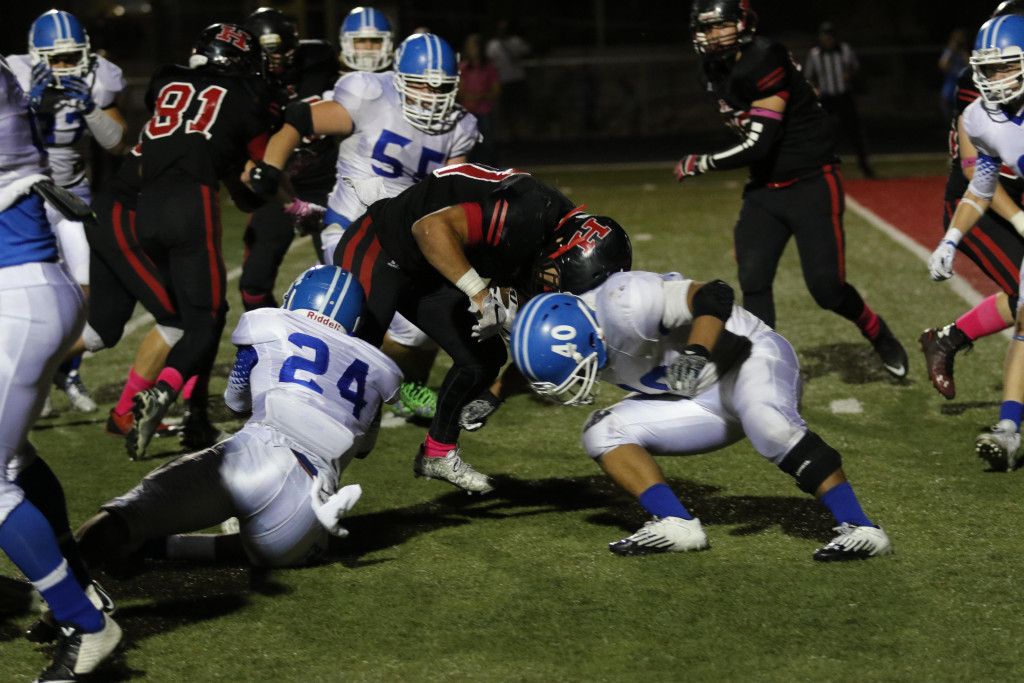 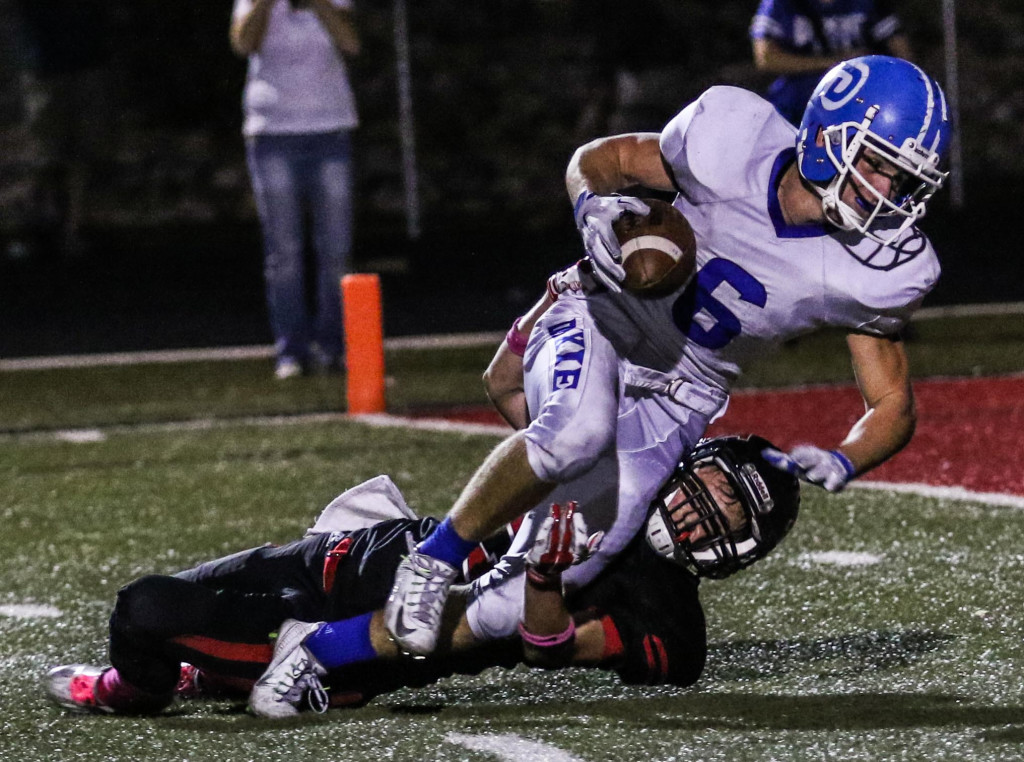 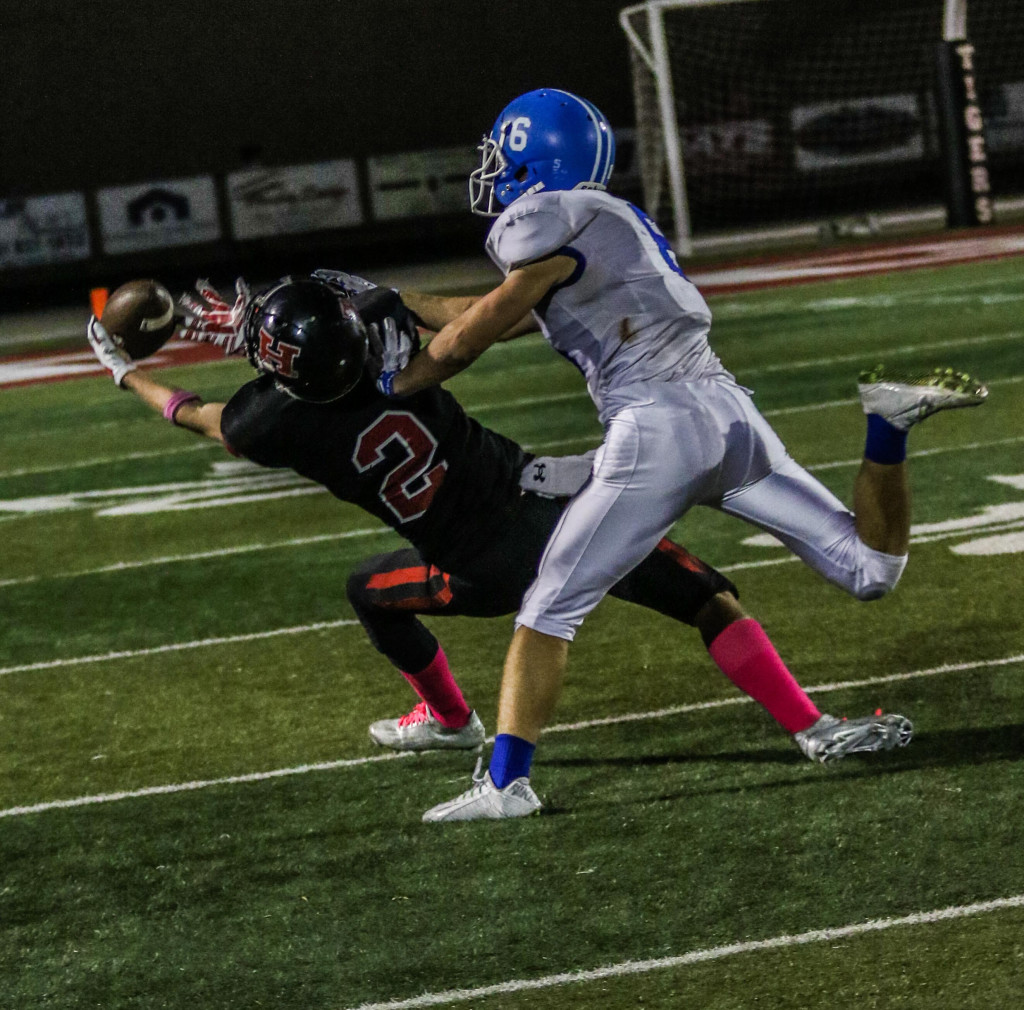