HURRICANE — The Hurricane Tigers dominated Cedar for three quarters Friday night — but almost let the game get away in the fourth.

Angel Bulloch rushed for 118 yards and three touchdowns in helping the Tigers build a 35-7 lead over the Redmen. But Cedar scored on two quick drives in the fourth quarter before defensive lineman Quando Ieremia’s interception finally ended the Cedar comeback with two minutes to play.

“Momentum is a funny thing and once you lose it, well it can be hard to get it back,” Hurricane coach Steve Pearson said. “You’re up big and you want to get some of the younger guys some playing time and not run up the score, then they score a couple of times and we can’t get the momentum back. Fortunately, things worked out all right.”

Most of the night, ol’ Mo was on the Tigers sideline. Starting fullback Jake Carr left in the first quarter with a leg injury, pressing Bulloch, who starts at linebacker on defense, into offensive duties as well. The 5-foot-9, 210-pound senior was up to the task, carrying the ball six times on his first series in the game. He netted 27 yards on those carries, with the last one a 3-yarder into the end zone that pushed the lead to 14-0 early in the second quarter.

“I haven’t played this much offense in a long time,” Bulloch said. “I wasn’t even paying attention, really. I was just kind of looking around and then, all of a sudden, someone says, ‘You’re in, Angel.’ I looked over and Jake was on the ground and I was like, ‘Oh no! I wasn’t thinking about me. I was worried about Jake.”

After a Cedar punt, Hurricane scored quickly to make it 21-0 on a nice play-action pass that the Redmen bit hard on. That left Kyler Blackmore wide open and he caught a 55-yard TD pass from Josh Parker.

Cedar made it 21-7 midway through the second quarter on a Drake Lewis 9-yard run, but the lead went back to 21 when Bulloch scored his second TD just before halftime. The 2-yard dive came after Bulloch had already rushed on six straight carries for 42 yards.

“We try to build our offense around tough kids at fullback,” Pearson said. “When one’s having trouble or is a little chipped up, then it’s time for the next guy. Here’s Angel and it was his turn tonight. He ran inspired. He has a really good forward lean and he gets out of the blocks really fast. The holes were there for him. Our offensive line did a great job.”

The Tigers seemingly put the game away with an 85-yard drive to start the second half. It took 15 plays and consumed nearly six minutes of clock time and Bulloch’s third TD, a 15-yard run, made it 35-7.

But give Cedar credit as the Redmen rallied. Mason Fakahua hit Drake Lewis on a short pass, but the Cedar junior wideout turned it into a 35-yard TD by breaking six tackles en route to the end zone. That made it 35-13 as the extra point doinked off the upright with 6:22 left in the game.

After a Hurricane punt, CHS cut it to 35-19 moments later as Fakahua found Lewis again, this time from 44-yards out with 4:52 left in the game.

Again, Hurricane was forced to punt, giving Cedar the ball back with 3:40 left in the game. The Redmen drove into Hurricane territory, but a halfback pass from Bodrey Allred was intercepted by Ieremia in the right flat to finally seal the win for the Tigers.

Hurricane now finds itself in a tie for first place (2-1 in region) with Dixie’s surprising loss at home to Snow Canyon Thursday night. The Tigers (4-2 overall) gained 410 yards in the game. Cedar, which had just over 200 late in the third quarter, exploded for nearly 200 yards in the final period and finished with 404 yards of total offense.

The Redmen are 3-4 overall and 1-2 in region play, tied with Pine View and Snow Canyon for fourth place.

Hurricane hosts Dixie next Friday night, while Cedar returns home for a date with the Pine View Panthers. 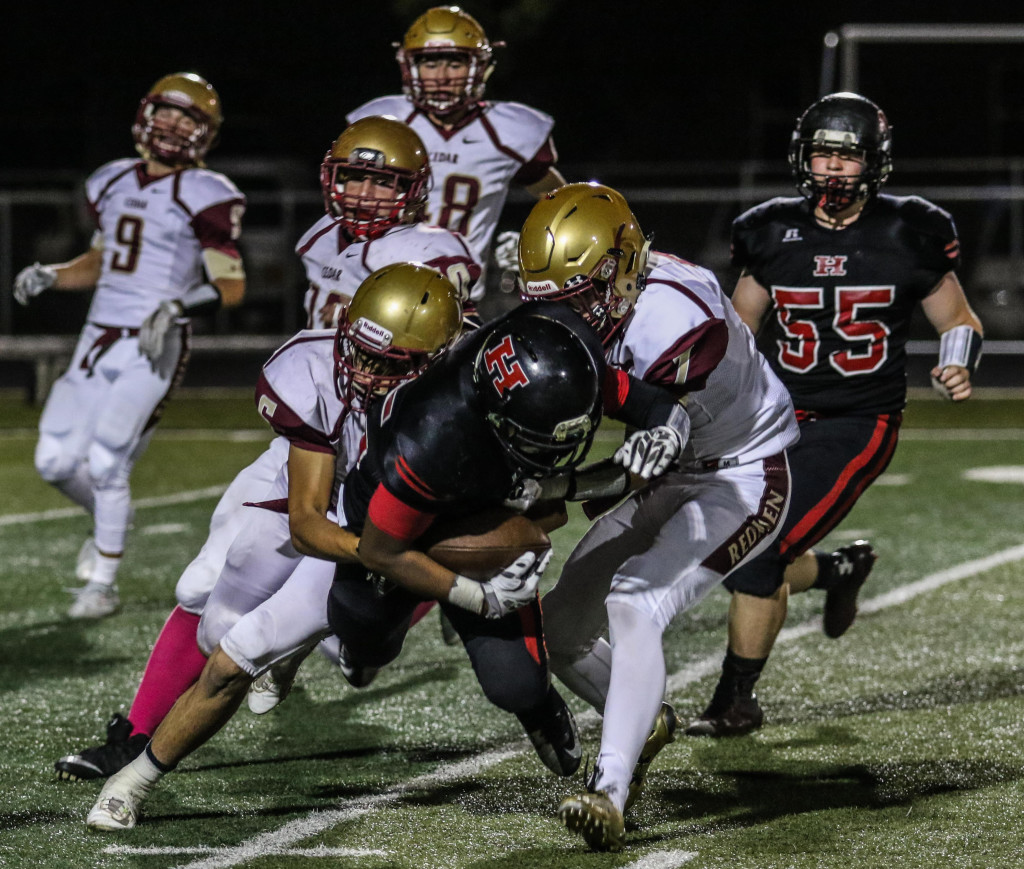 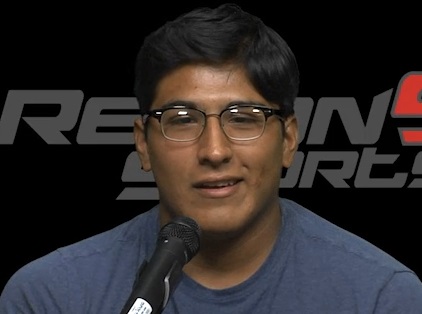 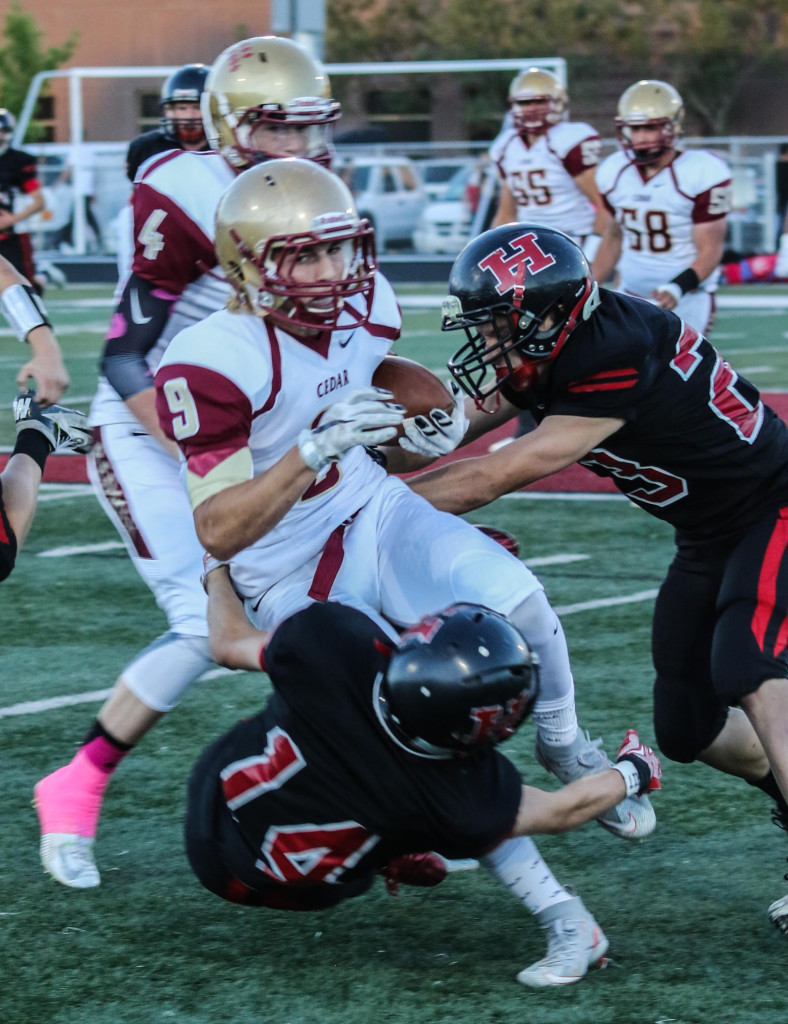 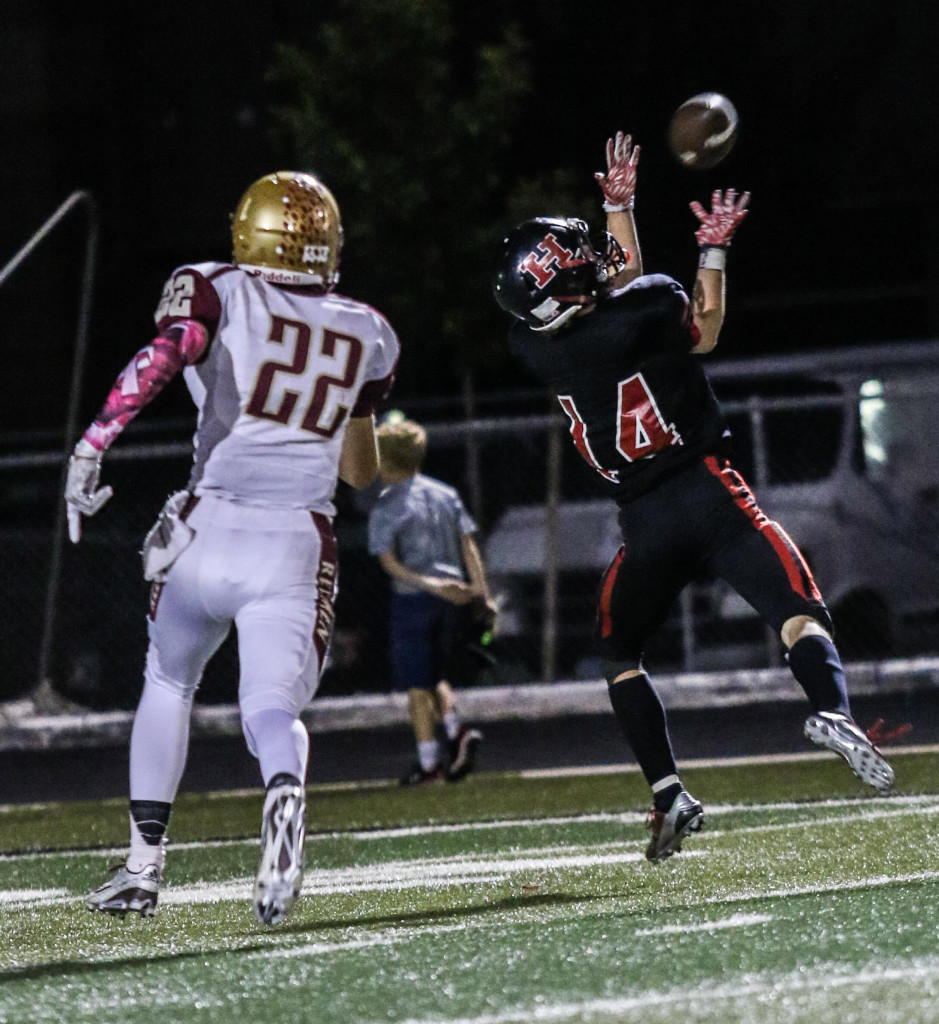 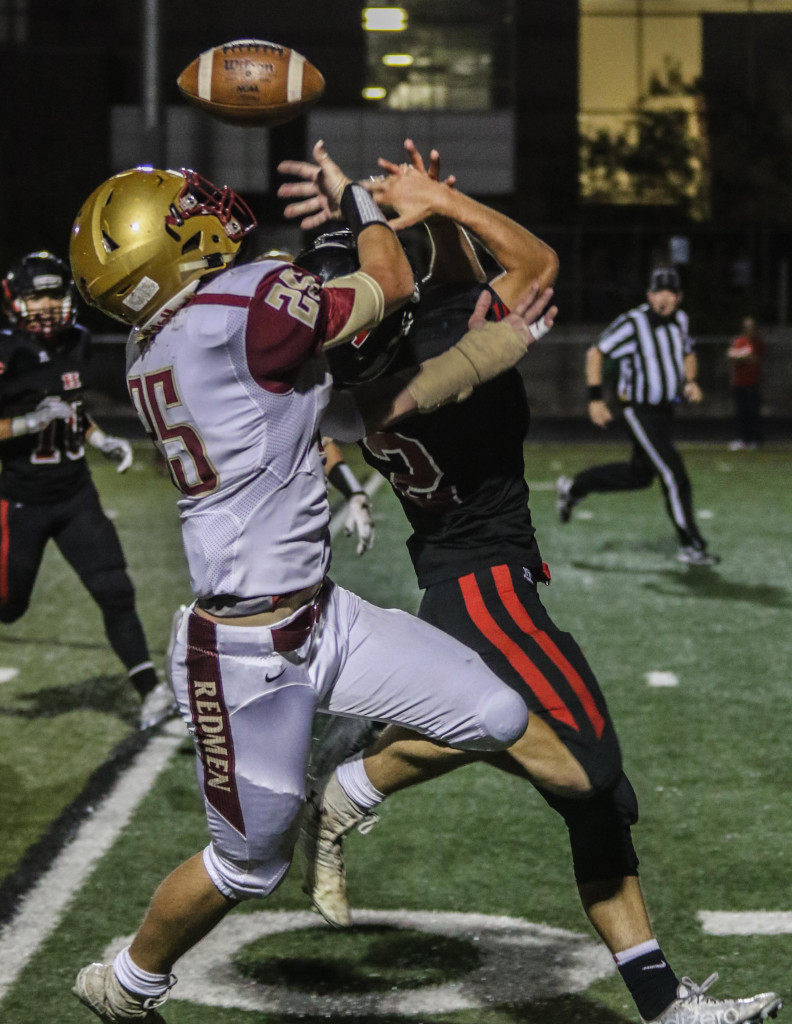 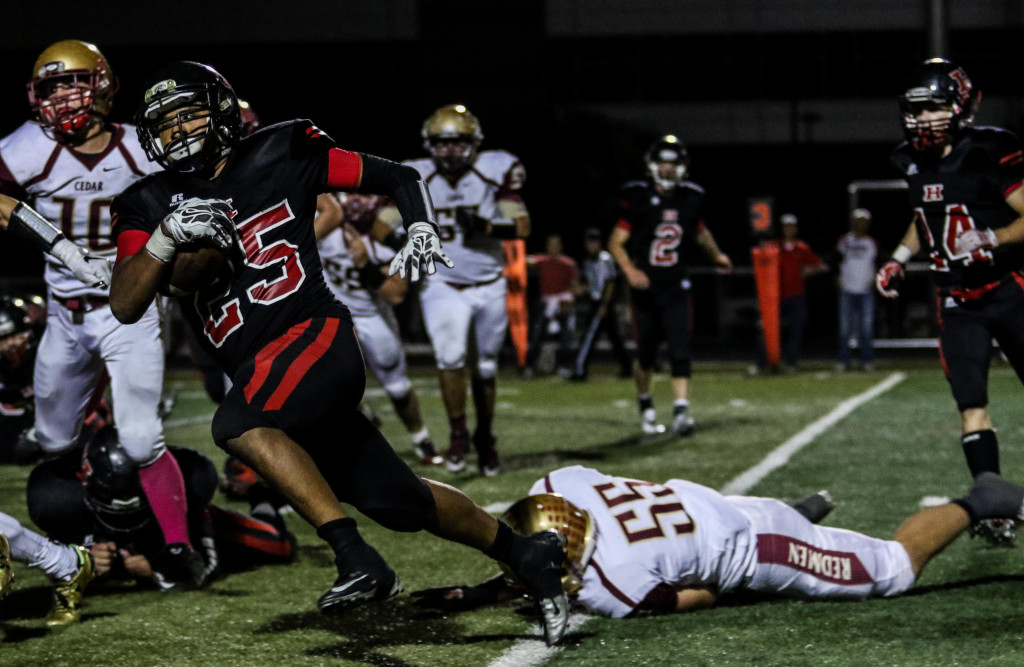 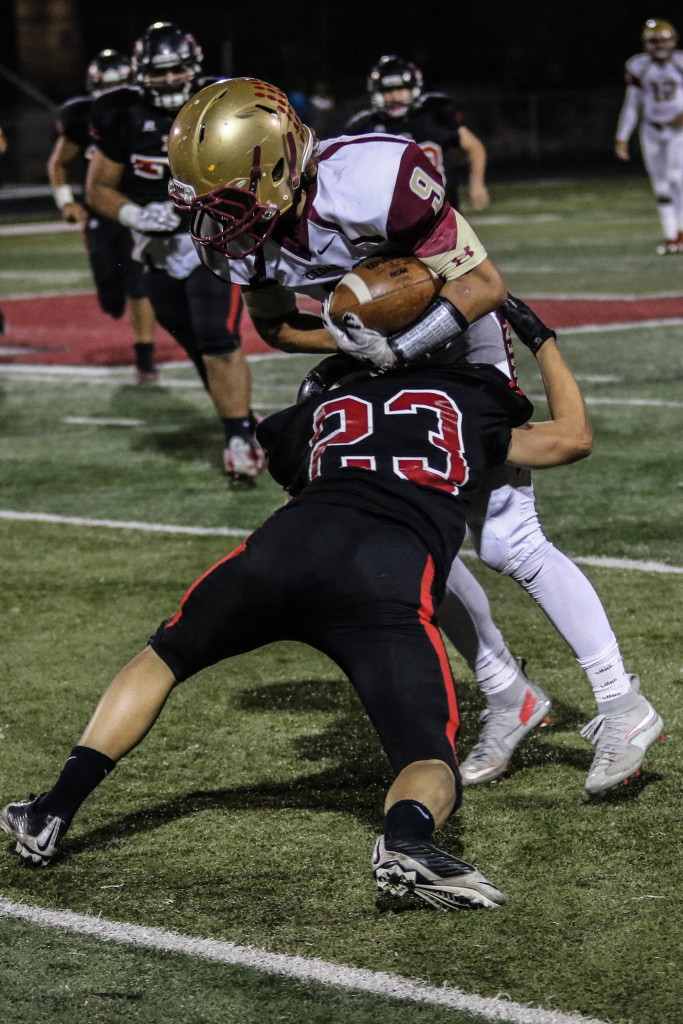 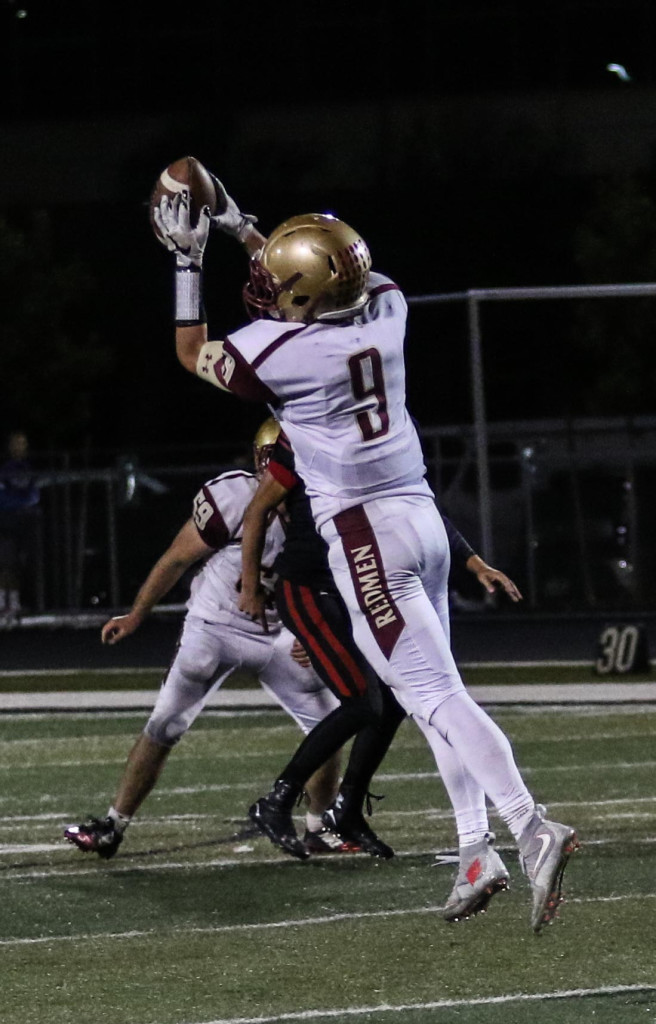