ST. GEORGE — Checking the Region 9 Twitter feed at about 8 p.m. Wednesday night would have led to the conclusion that all three home teams were going to pull out wins.

Checking it again an hour later would lead Twitter followers to a different result altogether.

While Dixie was able to maintain its lead and beat Canyon View, Desert Hills and Pine View had huge second halves to escape hostile gyms with wins. That leaves those teams at 1-2-3 in region play halfway through the Region 9 regular season. Desert Hills leads the league at 6-0, with Dixie sitting second at 5-1 and Pine View coming in at 4-2. There are six region games left for each team in the season.

The Tigers are winless in region, but they put a scare into the undefeated Thunder.

Hurricane played well early with the shooting of James Bennion leading to an 18-11 first quarter lead. The Tigers opened up the second quarter with a 7-2 spurt to seize their biggest lead if the game at 25-13.

Desert Hills chipped away at the lead a little in the second quarter. An Austin Adams jumper just before halftime cut the Hurricane lead to 32-25 at intermission.

In the third quarter, the sleeping giant woke up. Bennion’s 3-pointer made it 37-30 with 5:28 to go in the third, but the Thunder responded by scoring the next 12 points to go ahead 42-37 with 57 seconds left in the third as Quincy Mathews capped the run with a mid-range jump shot.

Tyson Yardley trimmed it to 42-39 on a 10-footer just before the third quarter buzzer, but D-Hills had outscored Hurricane 17-7 in the third.

The Thunder then took over the game, opening the fourth with five quick points, four of those by Mathews. Within moments, the lead was double-digits and it was clear the Thunder were headed for their sixth win in six region tries.

The Thunder, 13-3 overall and 6-0 in region, start the second half of region play Friday night with a road game at Cedar.

The Falcons pulled to within seven a couple of times in the second half after trailing by as many as 18. But in the end, the Flyers just had too much firepower for Canyon View.

Jake Hawes, who had 25 points, said his team was challenged by a scrappy Canyon View team.

“They’ve lost to every team by very little, like taking Pine View to overtime,” Hawes said. “They’re good. We couldn’t overlook them.”

Dixie started hot, scoring 25 points in the first quarter and leading by a dozen. By late in the second quarter, the lead had ballooned to 18 at 39-21 and Hawes had already racked 17 points of his own.

But Canyon View didn’t fold. Behind the shooting of Sterling Barnes and Derek Dunnell, the Falcons trimmed it to 41-29 at the half.

After intermission, CV continued to claw and fight and got all the way to within 43-36 after a jumper by Barnes. But less than five seconds later, Hawes snared a long pass and layed the ball in behind the defense to make it 45-36. Malachi Otis and RJ Wilgar followed for a 6-0 run to push the lead back to 13 at 49-36 midway through the third quarter.

The Falcons had one more run in them and pulled to with in 60-53 early in the fourth quarter. But Dixie quickly responded with consecutive baskets by Tyler Bennett and went on for the win.

“A win is a win and we’ll take a win, but give a lot of credit to Canyon View, Dixie coach Ryan Cuff said. “They came out and played extremely hard and played well. We knew they would.”

Turnovers were huge in the game, with Canyon View handing the ball over 13 times in the first half and 19 in the game, leading to 20 points off turnovers for the Flyers. The Falcons actually won the battle of the boards, out-rebounding Dixie 31-28.

But Dixie had a lot of easy shots against the porous Canyon View defense and was 30 for 56 in the game (55 percent). CV’s 3-point shooting helped keep the Falcons close as they made 7 of 14 deep balls. Dunnell had three of those and Barnes knocked down a pair.

Dixie, which got 25 from Hawes and 20 from Bennett, improves to 13-3 overall and 5-1 in region, the lone loss coming on a buzzer-beater to league-leading Desert Hills.

“We’re just really hungry,” Otis said. “We want a state championship and that’s all we’re settling for, that’s all we want. So every team is just another team in the road.”

The Flyers host Hurricane Friday night and then get that rematch with D-Hills next Wednesday.

The Panthers are the best defensive team in the region and it showed in the second half as PV allowed just 11 points after intermission in pulling away for the win.

It was neck-and-neck the first 16 minutes, with Mason Fakahua’s bucket in the lane giving the Redmen a 25-23 halftime lead. The Panthers went inside to open the second half and six quick points gave Pine View a lead it would never surrender. Kody Wilstead had two baskets and Jed Newby hit one in the run.

Cedar got within 33-30 later in the quarter on a basket by sophomore Keenen Nielson near the four-minute mark, but the Panthers defense wouldn’t allow another point in the third. Kendrick Spencer made it 35-30 and WIlstead completed an impressive sequence with a blocked shot and layup to make it 37-30 at then end of three.

As it turns out, Pine View was just getting warmed up. The fourth quarter opened with more defense, plus some outside shooting. Chaz Peterson nailed a 3-pointer to make it 40-30, then Wilstead, Peterson and Cody Ruesch all scored to make it 46-30. Peterson struck again from deep to make it 49-30 and the Panthers added three more points to the gargantuan run to make it 52-30. All totaled, Pine View scored 19 straight points and held Cedar scoreless for nearly six minutes of game time.

Kyle Wood hit a free throw to finally break the cold spell, but by then the Panthers were well on their way to a road win.

Wilstead had 15 points, 10 rebounds and 3 blocks, while Peterson added 13 points and 5 assists for Pine View, which improved to 13-2 overall and 4-2 in region play. The Panthers host Snow Canyon Friday night — sort of. The game will be played at Burns Arena as PV’s Pit Gymnasium will host a 33-team wrestling invitational this weekend. 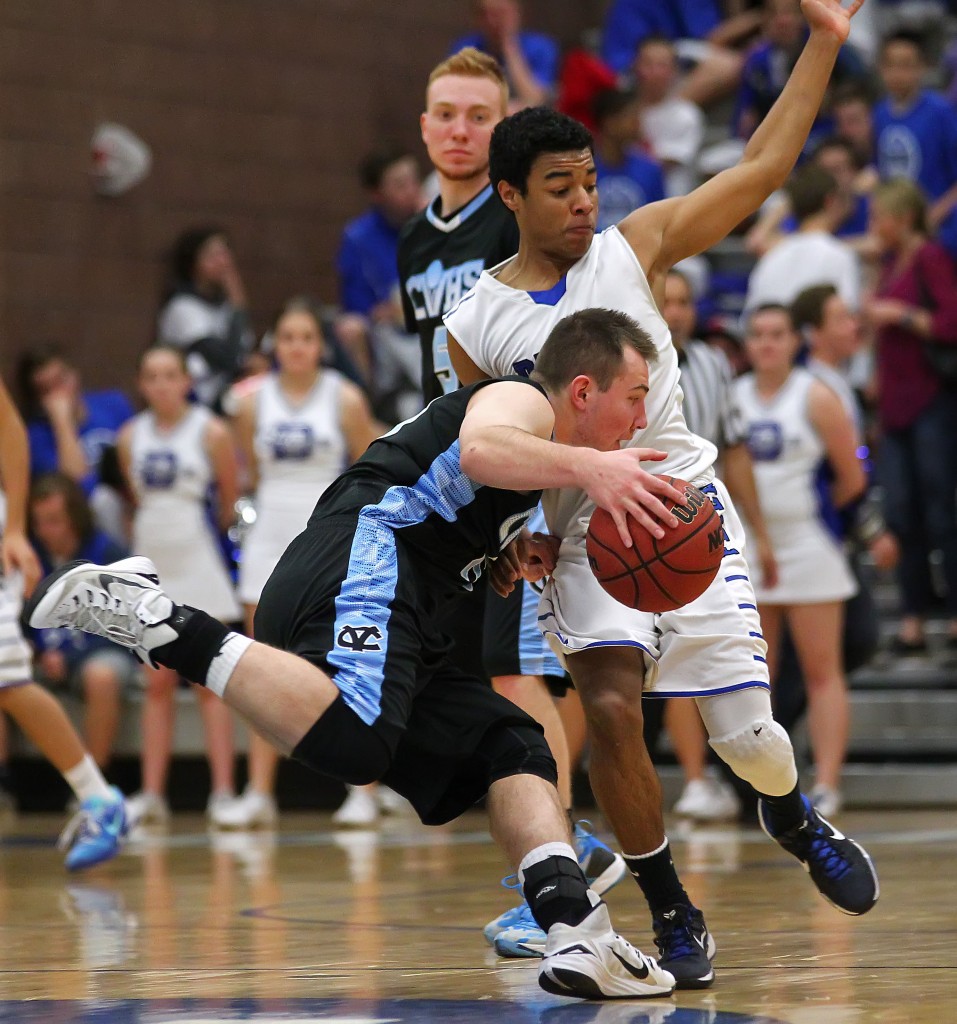 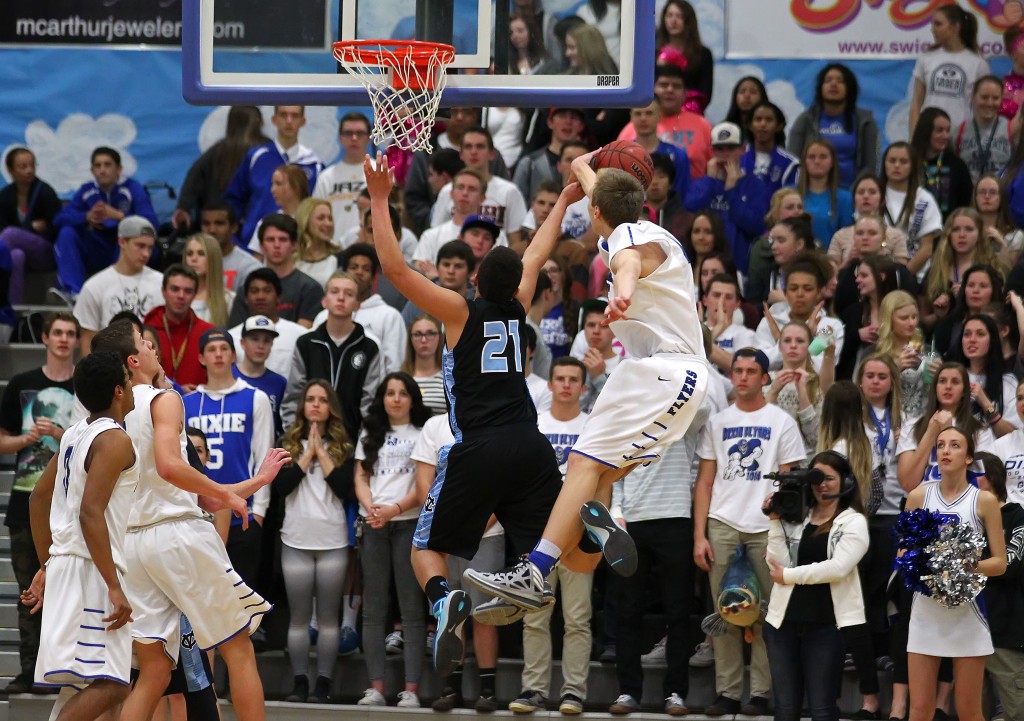 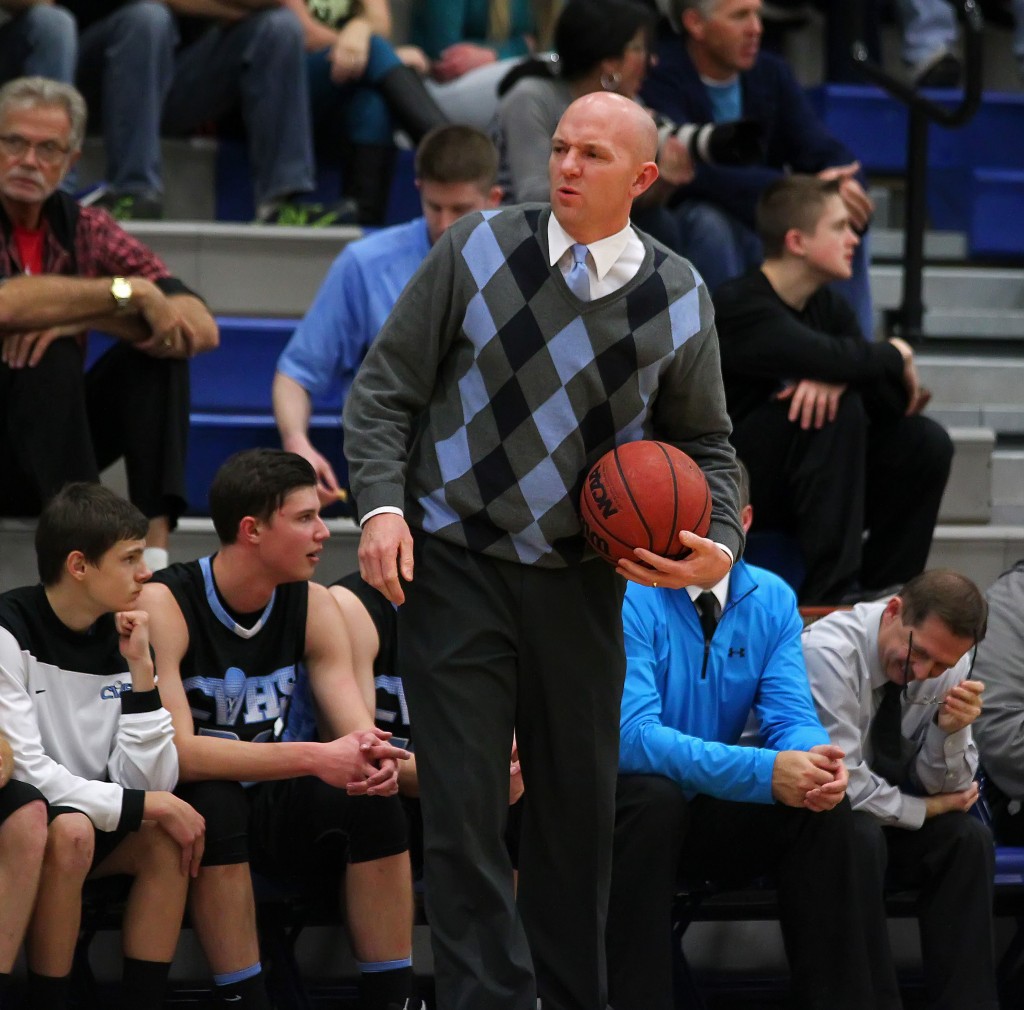 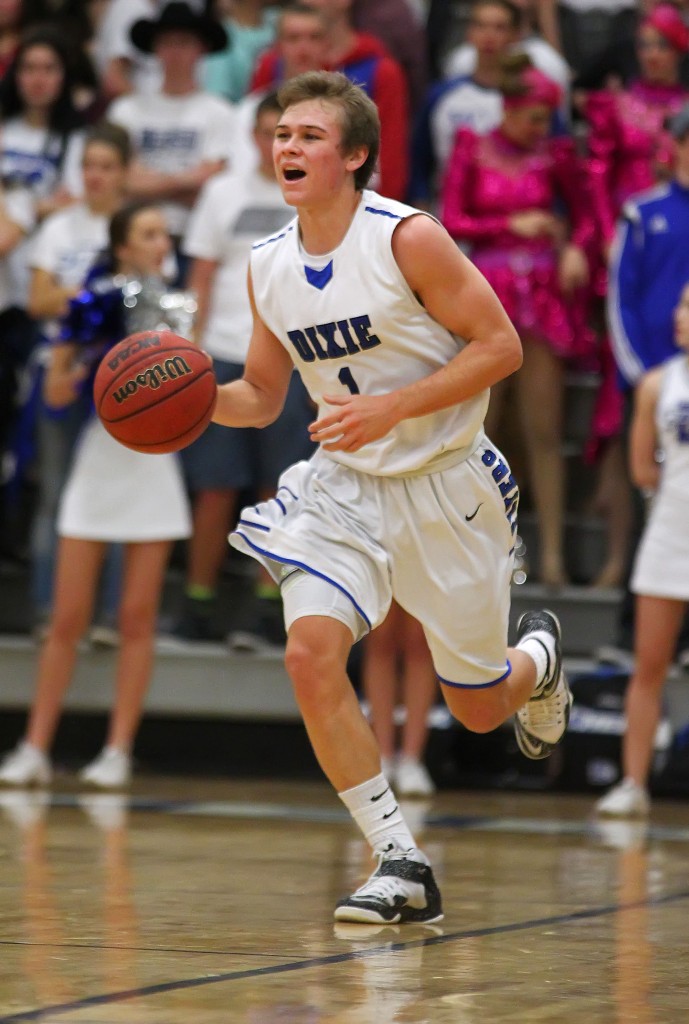 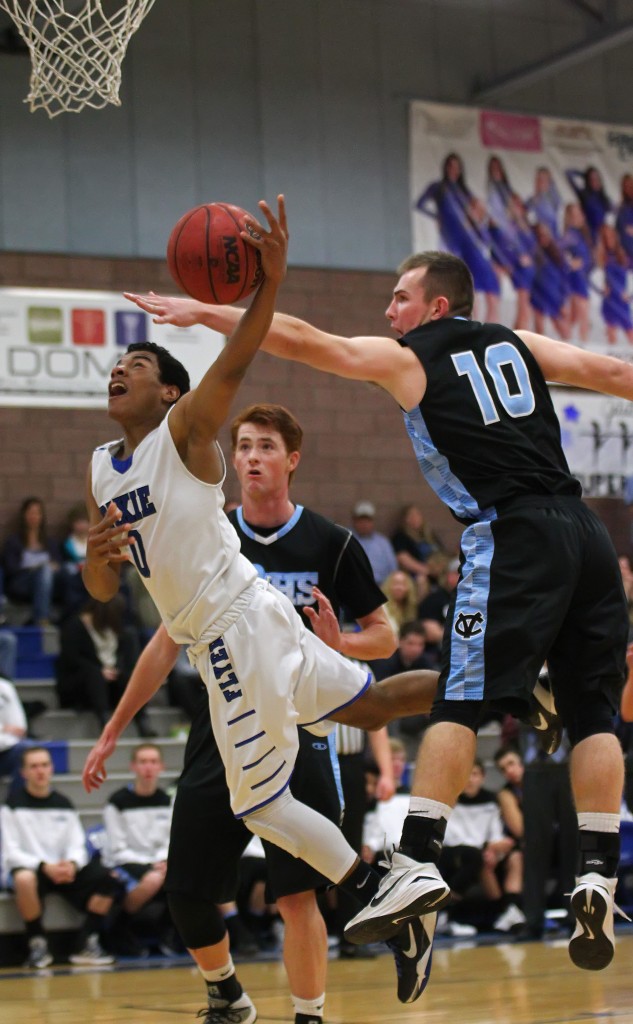 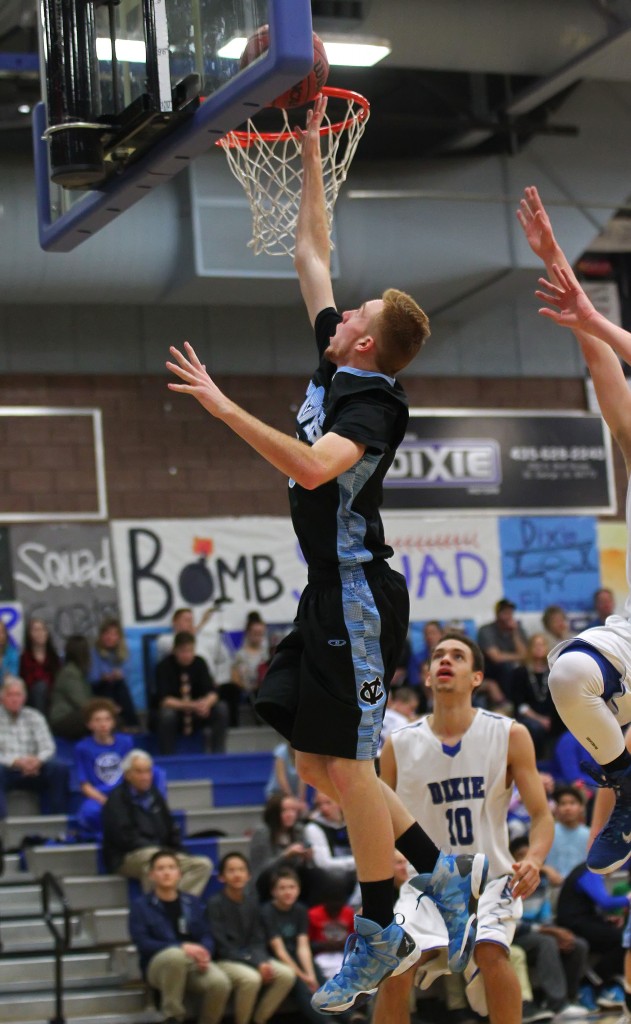 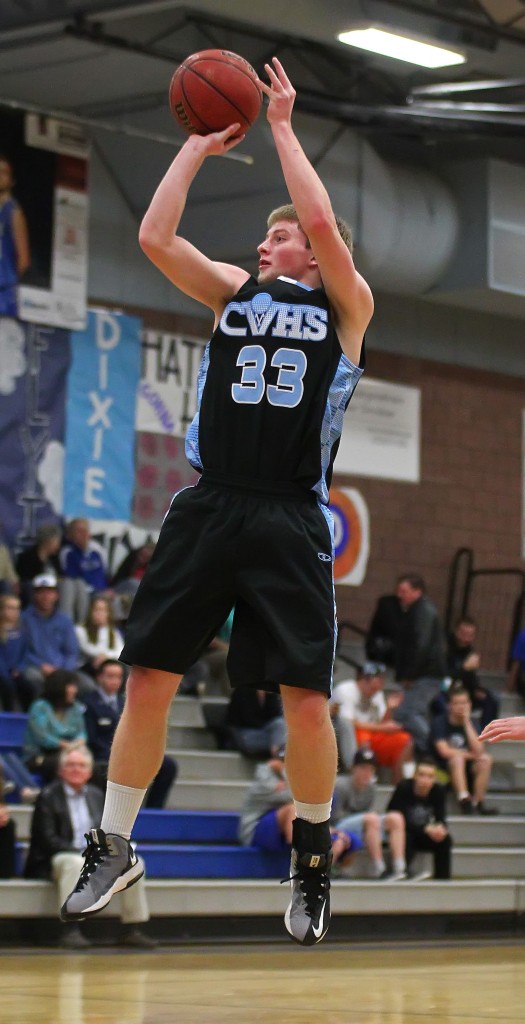