ST. GEORGE — Pine View and Desert Hills both captured their second wins in as many days at the Coach Walker Classic at Dixie State University Friday evening, taking down schools from bigger Utah classifications.

Snow Canyon, playing at home in a CWC Tourney game also grabbed a win, dropping 4A Mountain View in a barnburner at The Jungle. Meanwhile, Hurricane dropped a game against 2A Manti and Cedar and Canyon View both lost non-tournament games.

Players occasionally get in a shooting zone and get hot for a quarter or maybe even a half. But Austin Adams, Desert Hills’ 6-foot-5 center, was hot for an entire game. The senior post practically couldn’t miss in racking up 34 points Friday night as the Thunder pulled away from the scrappy Wildcats.

“Austin just had a game of a lifetime,” DH coach Wade Turley said. “There were times when I thought he could have gone in for a layup, but he was settling for those jump shots and man, they were going in. We did a smart thing in that the very first thing we did to start the game was get him the ball inside. Sometimes when you get a good offensive player started early, they kind of get in a comfort zone. He had a special, special night.”

Quincy Mathews had 16 of his own, including buzzer beaters at the end of the second and third quarters. Still, even with all the fireworks, Woods Cross hung in the game. Desert Hills was up 44-28 at halftime, but the Wildcats started the second half on an 8-0 tear to cut it to 44-36.

Mathews’ trey at the end of the third made it 61-49, but WCHS again trimmed the lead under 10 behind the sharpshooting of Zach Parrish. Eventually though, there was just too much Adams as he hit basket after basket from mid-range. The Wildcats finally broke midway through the fourth quarter.

“We wanted to win that first four minutes of the second half and kind of put them away, but just the opposite happened,” Turley said. “Give Woods Cross a lot of credit. Their two or three guards up there are very competitive and very good players.”

Garret Grant was hot from outside for Woods Cross, hitting four 3-pointers and finishing with a team-high 17 points. Parrish had 16, though the Cats fell to 1-6 on the season.

The Thunder, now 7-2, have won four straight games. DH hosts Viewmont at the Thunderdome Saturday at 1:30 p.m. The game will be on SportsRadio 106.1 FM.

Against the 5A Vikings, PV prevailed behind a strong second half from powerful post presence Kody Wilstead. The 6-foot-6 senior had 20 points and 11 rebounds in the game, most of the success coming in the second half. He had just two points and three turnovers before intermission.

Down 24-20 at half, Wilstead helped Pine View regain the lead by scoring 7 of the Panthers first 9 points in the third quarter. He sat down with his third foul with 4:25 to go in the third and Pine View leading 31-29.

The game stayed close the entire second half with PV’s biggest lead at 34-29 after a Garrett Bowker 3-pointer. Viewmont went on a 10-2 run and led at 39-36 with a couple of minutes left in the game. Cody Ruesch scored and WIlstead hit two free throws as PV’s 4-1 run tied it at 40-40.

Viewmont’s last lead was at 43-42 with under a minute to play, but Wilstead put Pine View up on an inside bucket with Jed Newby providing the assist. After a Vikings miss, Wilstead cleared the rebound and was fouled. He made two more freebies to make it 46-43 with 10 seconds left and the scenario repeated itself after a trey was missed by VHS. This time, Wilstead made 1 of 2 to make it 47-43.

A technical foul was called on Pine View that helped the Vikings cut it to 47-45 with .2 seconds left, but Wilstead stole the tip-in try at the buzzer to save the win.

Pine View is now 10-0 on the season, with Chaz Peterson chipping in 11 points, including three 3-pointers, in the win. The Panthers will head into hibernation after this W, playing their next game Jan. 2 at Richfield. PV resumes region play Jan. 7 with a home game vs. Dixie. Viewmont drops to 4-5 with the loss and will play Desert Hills Saturday at 1:30 p.m.

Justin Loveless had a career-high 21 points, including the game-winner with under 10 seconds left, as the Warriors edged the Bruins.

Mountain View, 2-4, led by as many as 14 in the second half. But the Warriors rallied behind the junior big man, Loveless. His previous career-high was nine points.

The Bruins led most of the game, holding a 40-32 advantage at halftime and 53-46 after three quarters. Jacob Frei (11 points) and Kade Potter (9) helped the Warriors chip away at the MV lead and the game was tied at 63-63 before Loveless got free inside for the go-ahead basket.

Brigham Bateman had 28 points, including seven 3-pointers, and Roman McKnight tossed in 19 for Mountain View, which fell to 2-4 with the loss. The Bruins play at Hurricane at 3:15 p.m. Saturday to complete their tourney experience.

Snow Canyon, which has won four straight, is now 4-2. The Warriors host <anti at 3:15 p.m. Saturday in the Jungle Gymnasium.

James Bennion hit five 3-pointers and had 21 points, but the Templars pulled out the win in the early game Friday evening.

An 11-2 run in the second quarter helped the Tigers to a 20-16 halftime lead and Hurricane kept the lead up until late in the third. That’s when Connor Bolles got hot. He hit a trey and two runners in the lane to help Manti grab the lead, turning a 27-22 deficit into a 28-27 advantage at the end of the third.

Hurricane was able to stay within 36-35 with 4:40 left in the game after an Austen Beatty power move in the lane. But the Templars got it rolling again, scoring five straight over the next two and a half minutes to make it 41-385 with 2:12 to play.

Four straight free throws by Beatty, along with one by Jayden Long, cut it to 41-40 with 53 seconds left. The Tigers fouled Thomas MacFarlane, who hit a pair with 32.6 to go to make it 43-40. After a Hurricane turnover, Thomas Allred iced the game with two more freebies with 24 seconds to play.

Beatty had 12 points for the Tigers, but no other player (besides Bennion) had more than three points in the game.

Only three Red Devils scored in the game, but it was enough. Kaden Hillstead had 22 points, including four 3-pointers, while Andrew Slack added 15 and Hunter Davis chipped in 9 as Springville got the W.

Jace Wilkerson led Cedar with 10 points. The Redmen led by three in the second quarter and took the lead at 21-20 briefly in the third. But Springville went on a 9-2 run to grab the lead and never surrender it.

Brandon Willardson scored 21 points and had three treys as the Wildcats dominated the Falcons.

The Cats led by 14 at the half and were never challenged the rest of the way. Richfield made eight 3-pointers in the game.

Canyon View, 2-4, was led by Keaton Kringlen with 15 points. Brantszen Blackner added eight. CV next plays on Dec. 29 where it will host Uintah in the Steve Hodson Cancer Classic. Richfield is 3-5 and is now 1-3 against Region 9 schools. 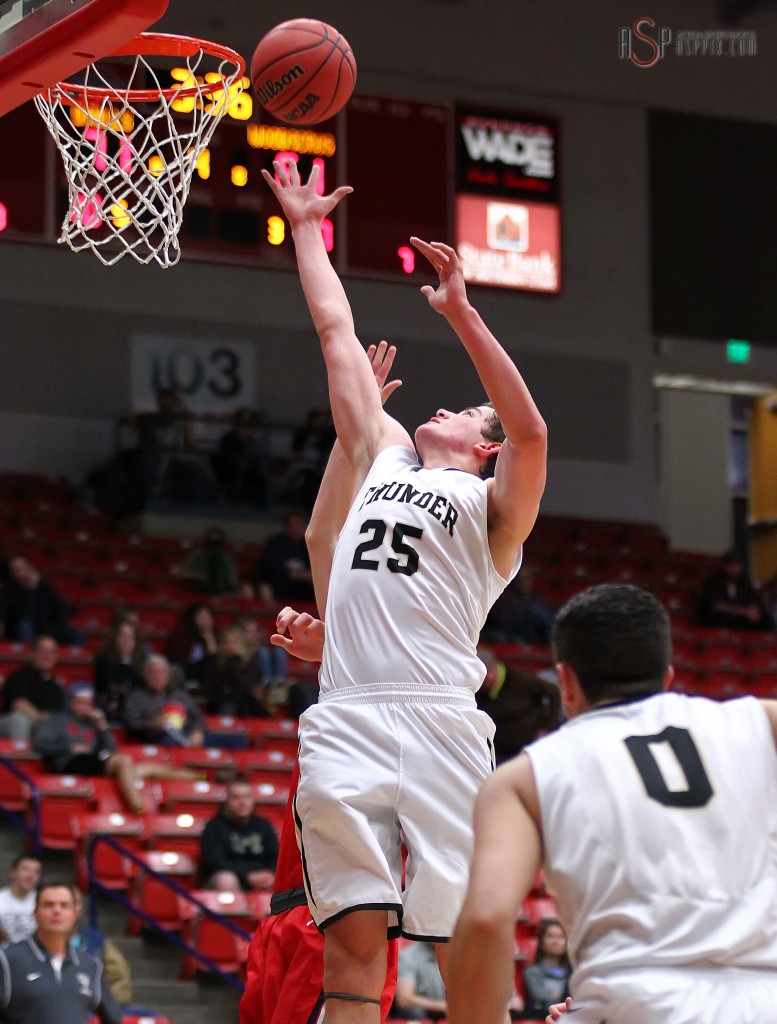 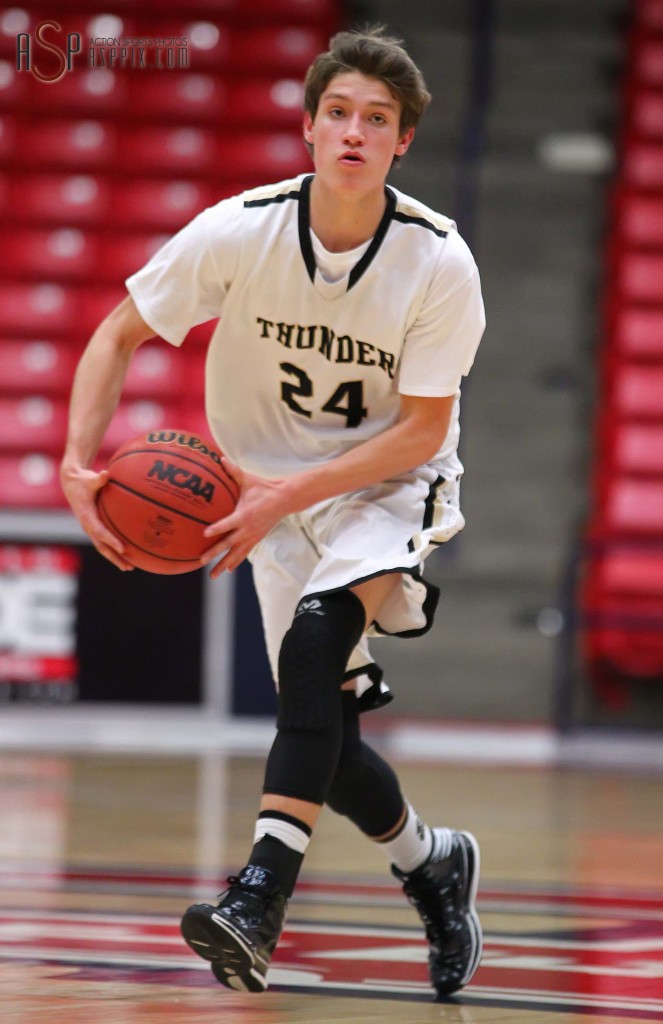 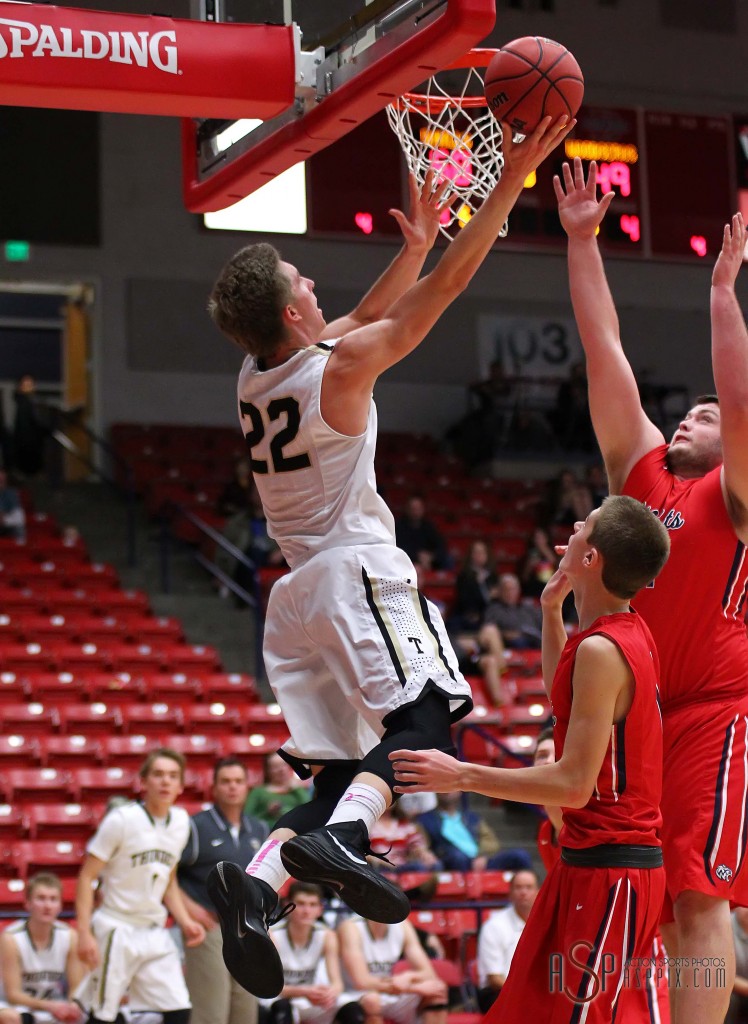 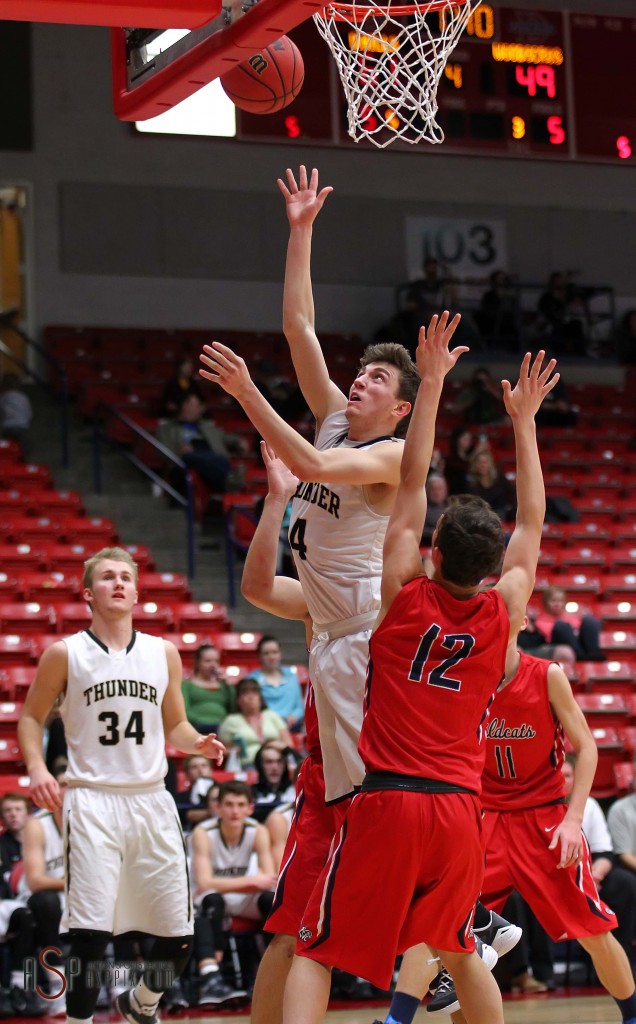 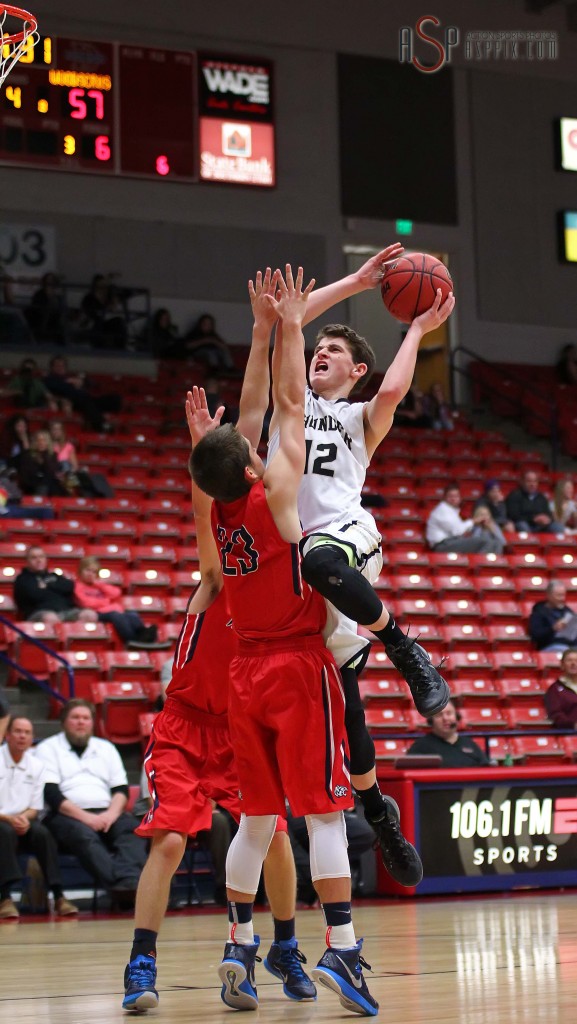 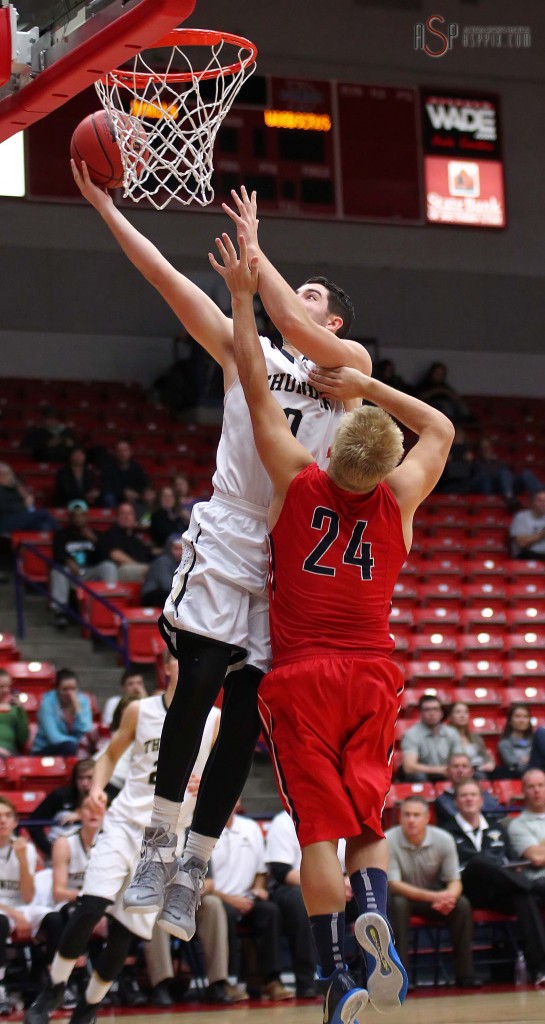 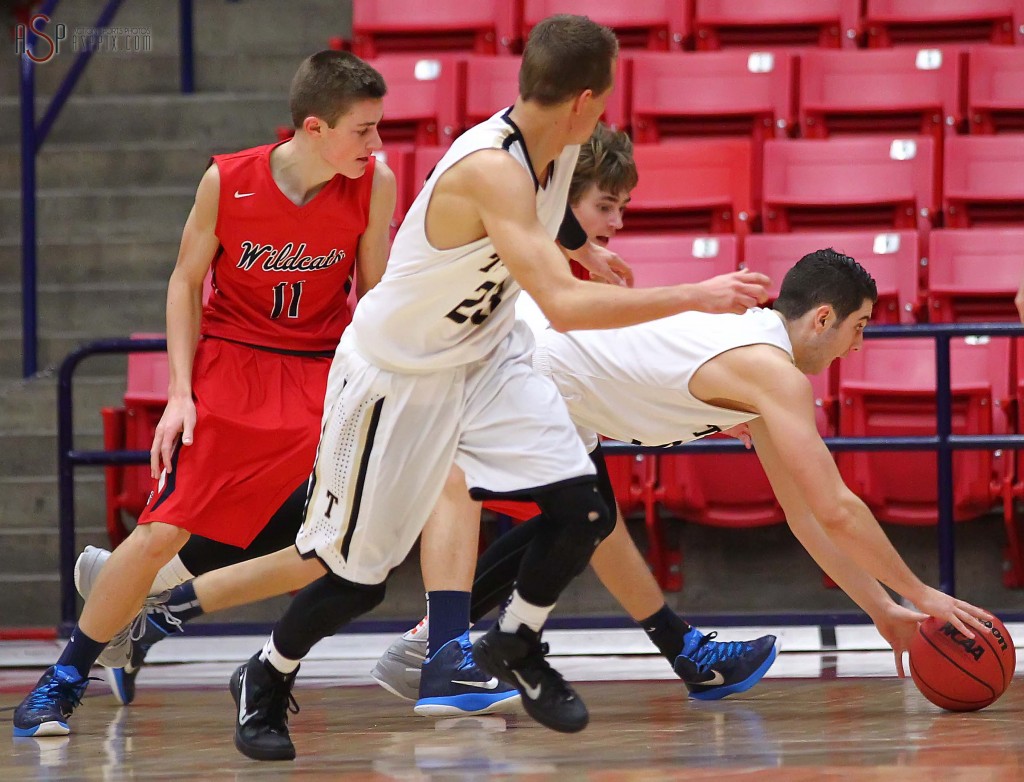