Hall ignited a first-quarter barrage that looked to be ominous for the Panthers. The Golden Eagles would score the first seven points, five from Hall.

“This team is resilient,” said Panther head coach Darrell Larsen. “We played a great team on the second night of a back-to-back-to-back. This was a good win tonight.”

The Panthers finally got on the board halfway through the first when point guard Carter Milne found Jed Newby in the lane. Cody Ruesch followed that up with two baskets to close the quarter but after one the Golden Eagles had a 11-6 advantage.

The lead would grow to nine with less than a minute gone on two buckets by Maple Mountain’s Garrett Griffin and Dawson Beutler. After a Panther timeout, wing Kendrick Spencer snapped the Golden Eagle run with a trey from the left side. That ignited a 20-2 run by the Panthers over the next six minutes. Most of the damage came from the postmen. Ruesch, Wilstead, and Newby combined for 11 points. With just over one minute left in the half, the Panther lead was 26-17.

“Our interior passing has been good all year,” said Ruesch. “When Kody draws the double-team we can usually get an open shot in the high post.”

The Golden Eagles amped up the pressure in the waning seconds. Maple Mountain would score the last seven points of the half with three coming on a last-second shot by Hall. Pine View still held a 26-24 lead at the half.

A three-point play by Maple Mountain’s Bryson Anderson to start the second half allowed the Golden Eagles to reclaim the lead. The teams traded buckets over the next two minutes and with 5:45 left in the third, MMHS’s Kade Poulson knotted the game at 31 with a trey from the right side.

Pine View then lit up the Golden Eagles from the outside. Garrett Bowker, Chaz Peterson and Milne all hit from distance during an 11-0 run to put the Panthers up 42-31 with 3:25 remaining in the third. Maple Mountain closed the quarter 6-2 to pull within seven going into the fourth.

The Panthers put the game away at the beginning of the fourth quarter. The inside-outside combination of Wilstead and the Panther wings proved to be too much for the Golden Eagles defense.

“Most people think of Kody (Wilstead) as a good scorer and defender,” said Larsen. “But he is actually a great passer.”

The final basket of the game came on a pass to Wilstead in the high post. The defensive player went for the steal. Wilstead gathered the pass, spun towards the basket and emphatically dunked the ball to get the score to its final margin, 64-49.

“The coach told me to flash to the ball,” said Wilstead. “When I turned, there was no one between me and the basket.”

“We are really happy with this win,” said Newby. “But tomorrow is our third game in three nights. Against a tough Viewmont team that beat Dixie tonight. So our focus now is on the next game.”

Jaren Hall is the son of Kalin Hall, former NJCAA All-American running back at Dixie Junior College and at BYU. “It is always good to be back in St. George,” said Hall. “My brother still lives here and we have a lot of friends still here from my college days.”

With the win, Pine View stays undefeated at 8-0. The Panthers will face Viewmont Friday night at 8:30 p.m. at Burns Arena. Maple Mountain suffers its second defeat after opening the season 5-0.

TJ Taimi is starting to get into a groove as the SC junior followed up Wednesday’s 17-point game with a 14-point outing Thursday vs. the Wildcats.

“I’m excited for this tournament to help us get some things down, like rotations and substitutions,” Snow Canyon coach James Brown said. “We’re happy to be a part of the Coach Walker Classic.”

The game, played at Snow Canyon High School, was close most of the way. The Warriors led by six early in the fourth quarter, but Woods Cross rallied and kept it interesting until the very end.

Taimi, who had scored just 13 points total in three games this season before Wednesday, upped his season average to 8.8 ppg. It had previously been 4.3. He hit a pair of 3-pointers in Thursday’s win.

Jacob Frei chipped in 12 points and Brad Grisenti added 11 for Snow Canyon, which is 3-2 and battles Mountain View at 8:30 p.m. at the Jungle Gymnasium at SCHS.

Jordan Lewis had 20 points and garret Grant had 16 to pace the Wildcats, who fell to 1-5 on the season. The 4A ‘Cats play Desert Hills at 6:45 Friday night at Dixie State’s Burns Arena.

Once again the Desert Hills defense was stellar in holding the Templars to 38 points and 38 percent shooting. DH also dominated the glass, winning that stat 42-20.

Quincy Mathews continues his stellar senior season as he had 17 points and 8 rebounds. The Thunder forward is averaging 18.5 points and 8.1 rebounds a game.

Manti could manage just 15 points in the first half as Desert Hills opened up a 29-15 lead after 16 minutes. Tanner Leishman, playing in his second game since moving in from Las Vegas and Bishop Gorman High School, had 8 points and 8 rebounds for DH, which improved to 6-2 on the season.

The Templars were led by Trevor Alder, who had 13 points and 3 boards. Manti is 4-2 on the season.

The Thunder continue their Coach Walker Classic play Friday against Woods Cross at 6:45 p.m. Manti will battle Hurricane at 5 p.m. Both games are at DSU’s Burns Arena.

Nate Crockett had a shot from the left baseline for the win as time expired, but it was a bit short and caromed off the iron to seal the Vikings win.

The Flyers trailed most of the game after a slow start saw them get behind 17-10 in the first quarter. Viewmont led by as many as 12 in the first half and held a 38-28 lead early in the third quarter when Dixie went on a huge run. Jake Hawes and RJ Wilgar hit back to back 3-pointers to start the run and Izaic Blazzard’s free throw tied the game at 42-42 with 3:10 left in the third.

The Vikings countered with a 10-0 run of their own and held the momentum deep into the fourth quarter. With 1:08 left in the game, Jake Walker’s free throws made it 68-59.

After a missed VHS free throw, Malachi Otis did his own 360 in the lane and laid it in to make it 68-66 with eight seconds left.

Again Dixie fouled and when Jamison Smith missed the free throw with 4.1 seconds left, the Flyers had a chance. Otis dribbled to the top of the key and found Crockett in the corner. The rushed shot got away cleanly, but was a bit short as the buzzer sounded.

“We got what we wanted at the end, a chance to win it,” Dixie coach Ryan Cuff said. “We didn’t have time to set a screen or anything. But our guys didn’t quit. We all hate losing, but there are some lessons we can learn about bouncing back and keeping battling all the way to the end. We understand where we need to get work done.”

Bennett and Wilgar had 20 points each on identical 8 of 13 shooting in the game to lead Dixie and Bennett had 7 rebounds. Jake Hawes added 18.

Viewmont was phenomenal from deep, making 11 of 18 3-pointers. Walker was the main sharpshooter, hitting 6 of 7 en route to a 26-point outing. Austin Johnson had 19 points and 11 rebounds. The Vikings out-rebounded Dixie 29-19 and made all five trey attempts in the second half. 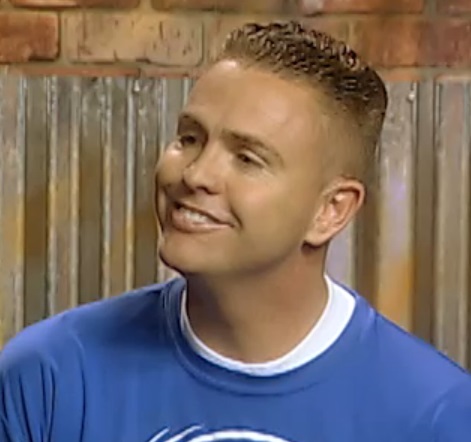 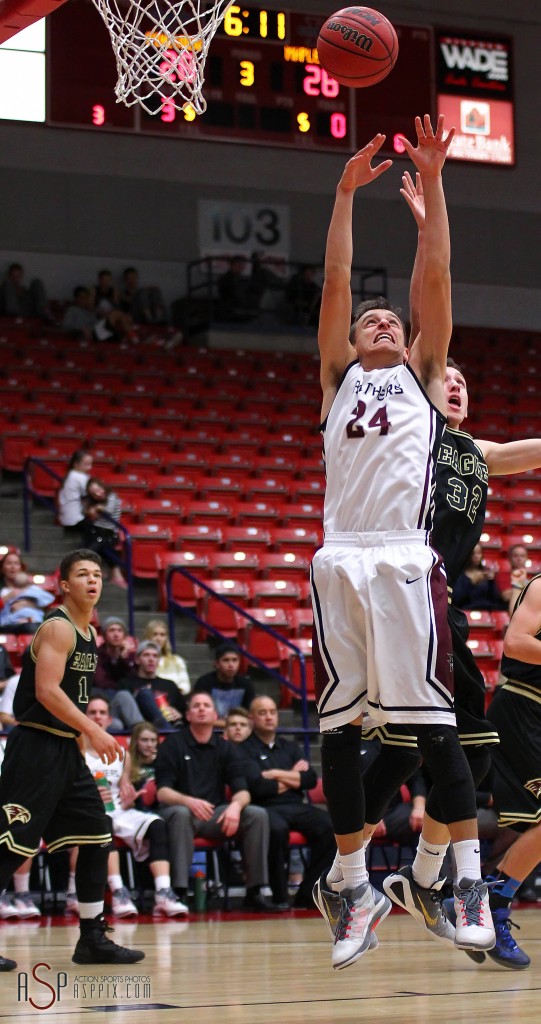 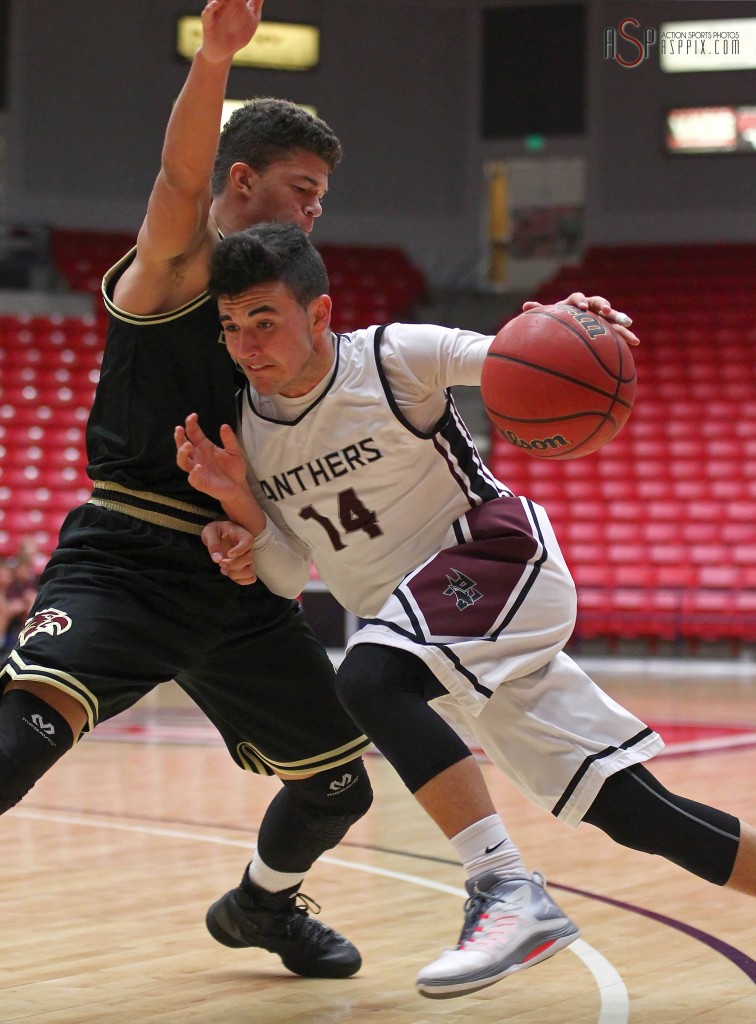 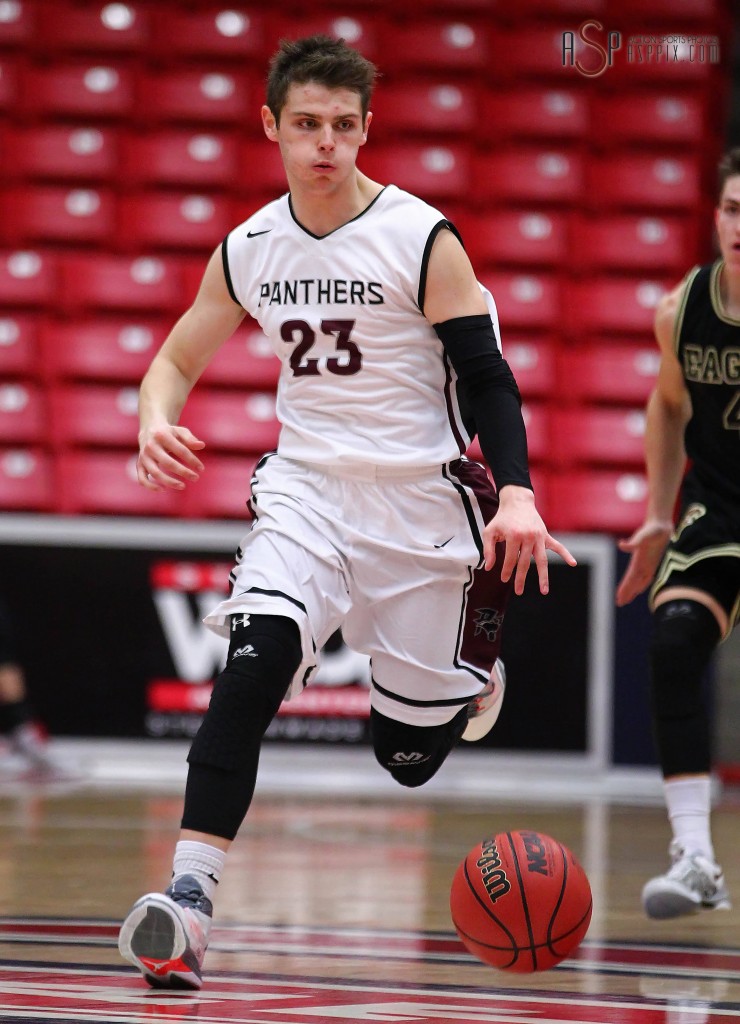 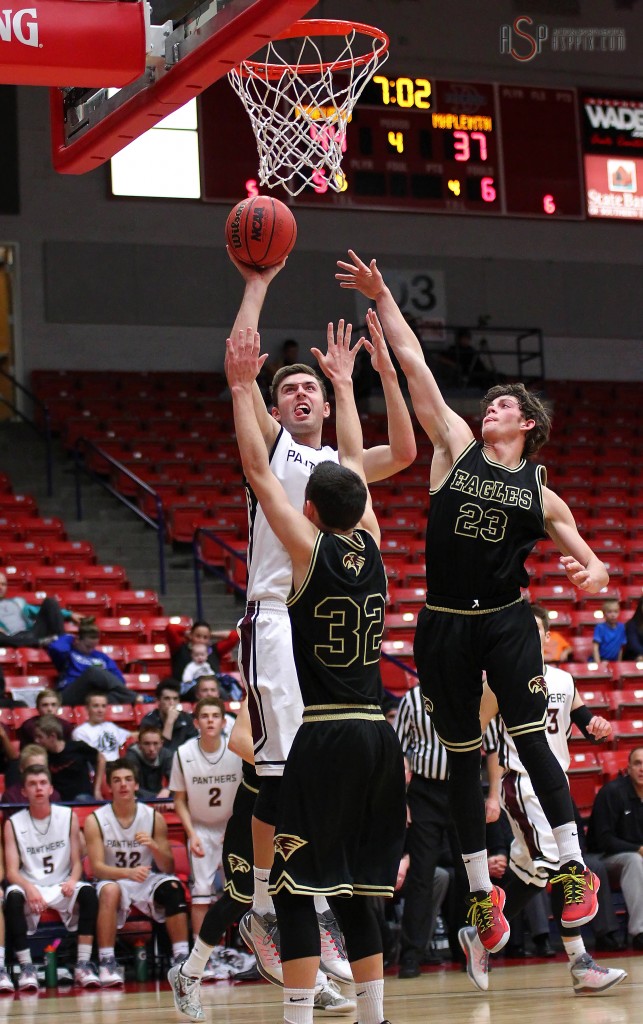 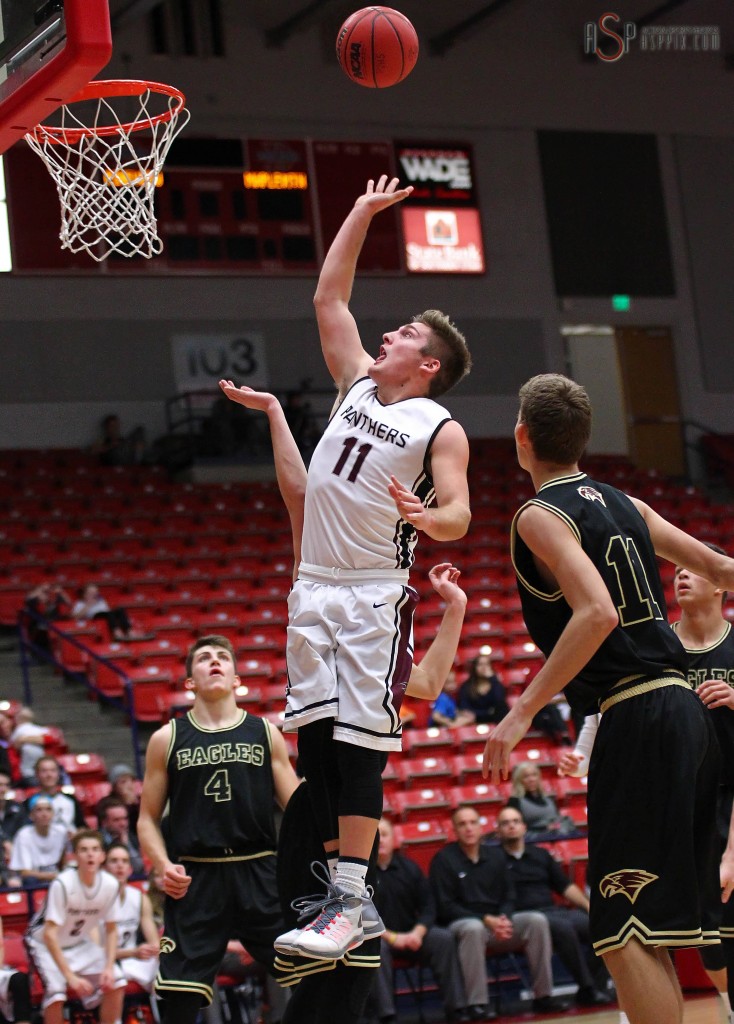 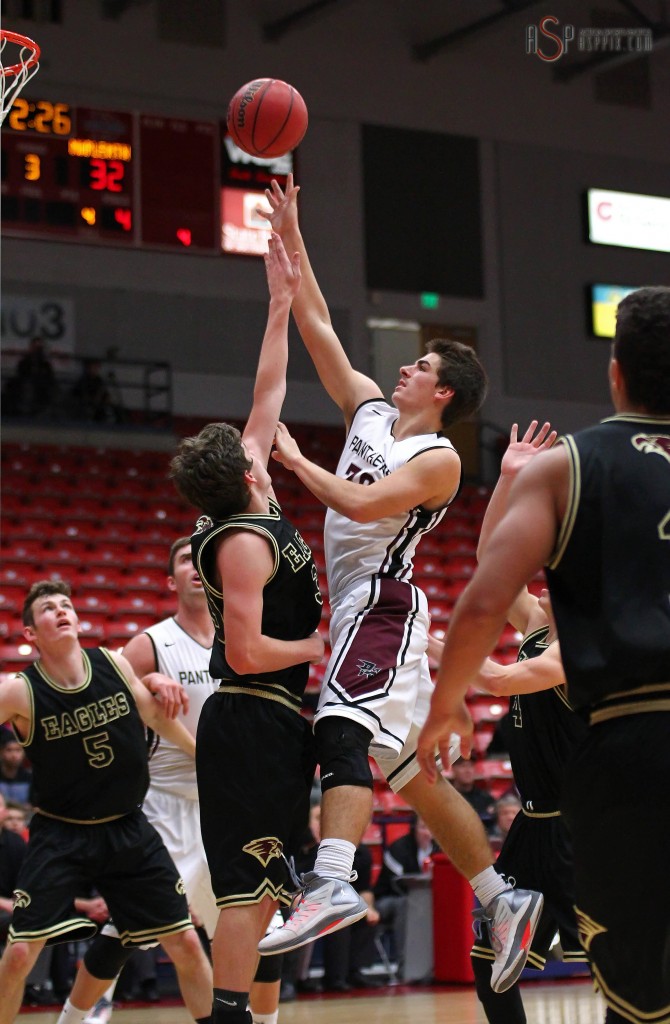 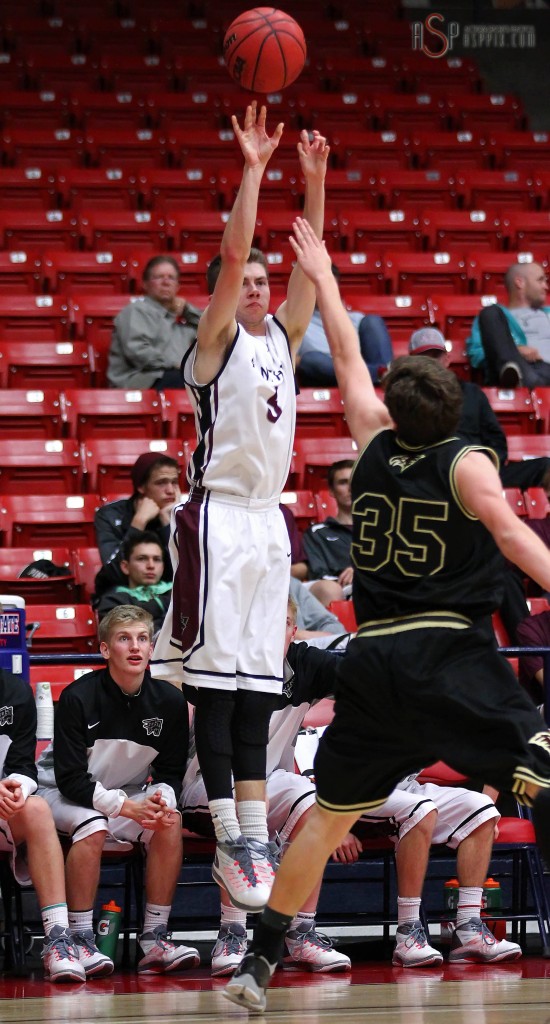