At approximately 8:07 a.m., the St. George Communications Center received a suspicious person call from a person in the Desert Hills area that had seen a vehicle that seemed odd, parked in front of a residence, St. George Police Captain Michael Giles said.

The witness went out to check on the vehicle and the driver hunched down like he was trying to hide from the witness and then drove away, he said. The witness was able to get a license plate number from the vehicle and called into the Police Department to report the suspicious circumstances.

The citizen followed the vehicle on South River Road through the Industrial area.

“He was able to give us a registration number from the license plate and NCIC (the National Crime Information Center database) hit as a stolen vehicle,” Giles said.

The citizen stopped following due to the speed that the Jetta was traveling.

“Officers were in the area of Interstate 15 and Southern Parkway and located the vehicle,” Giles said. “They attempted to make a traffic stop, but I’m not certain if they actually stopped, or if the suspect fled the instant that the lights went on, but the suspect in the vehicle did flee from the officer.”

When it became clear that the driver wasn’t going to stop, the officer discontinued his attempt to make the stop and didn’t engage in a pursuit beyond that point.

“The vehicle was seen on I-15 traveling at a high rate of speed so we moved to various off-ramps to block the freeway so that he wouldn’t come into town driving that way,” Giles said. “It seemed like he tried to get off at Exit 6 and saw an officer and diverted back onto the freeway, headed to about mile post 7, did a U-turn and was traveling southbound on the northbound shoulder in the dirt.”

Traveling at a high-rate of speed, the suspect moved further off the shoulder of the roadway, hit uneven terrain, lost control just before reaching Exit 6, and crashed into the barrier fence between I-15 and Sunland Drive. The suspect fled the vehicle and began running on foot towards Findlay Hyundai.

By that time, several officers had set up a perimeter in the area and were receiving assistance from a variety of citizens who had witnessed the suspect running through the area on foot.

“We even had a hot air balloon pilot or passenger calling in a report from their vantage point in the air above the scene, pointing out a possible suspect,” Giles said.

The suspect was seen walking through the area of the parking lot of the Bureau of Land Management office on Riverside Drive.

There was a brief foot pursuit before officers ended up catching up to the suspect behind the BLM offices in a dumpster alcove. He was taken into custody without any additional force being used.

The suspect was taken to Dixie Regional Medical Center in St. George by ambulance.

“He had fled on foot but he wasn’t wearing any shoes,” Giles said, “so he had some injuries to his feet, and as a precautionary issue for the accident, he was taken to DRMC for medical clearance.”

Officers were still cleaning up the scene of the crashed Jetta and surveying the contents of the vehicle at 9:30 a.m.

“I can’t tell you exactly what the charges are at this point until he’s booked,” Giles said. “I don’t know what the officer is going to charge, but I anticipate felony evasion for the vehicle portion and failing to stop at the command of a police officer which is for the foot pursuit that ensued. I’m not sure what traffic violations will be charged or if any of those will be charged.”

Officers were currently investigating the status of the vehicle which was listed by Weber County as a stolen vehicle.

We’ve confirmed that at least the plate was stolen and we’re looking at the status of the vehicle at this point,” Giles said. “We haven’t confirmed his identity at this point, we’re trying to work on that as well.” 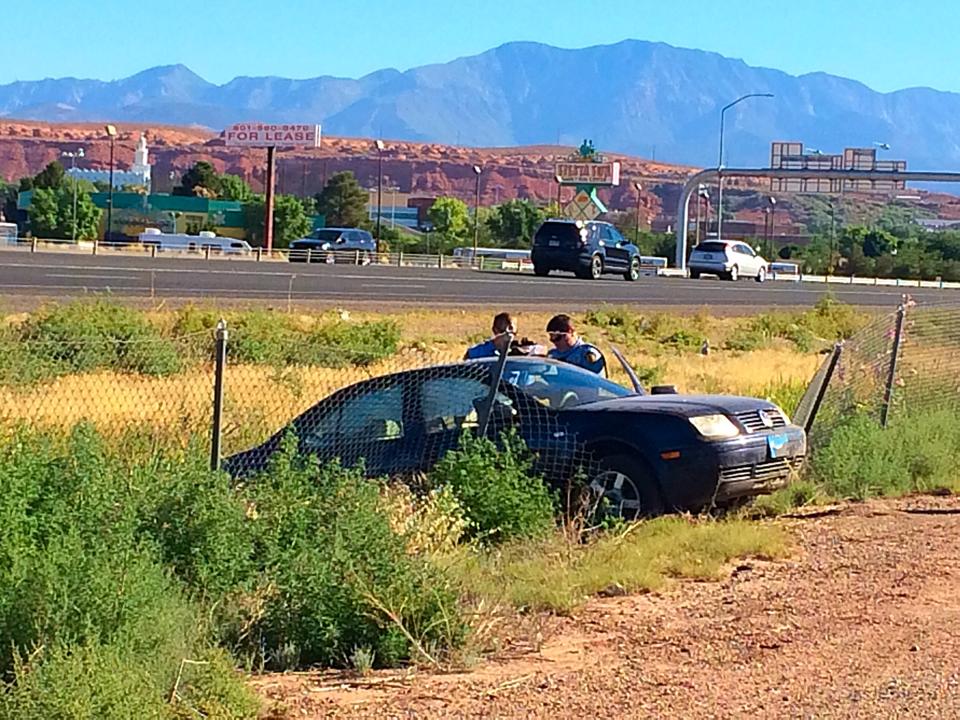 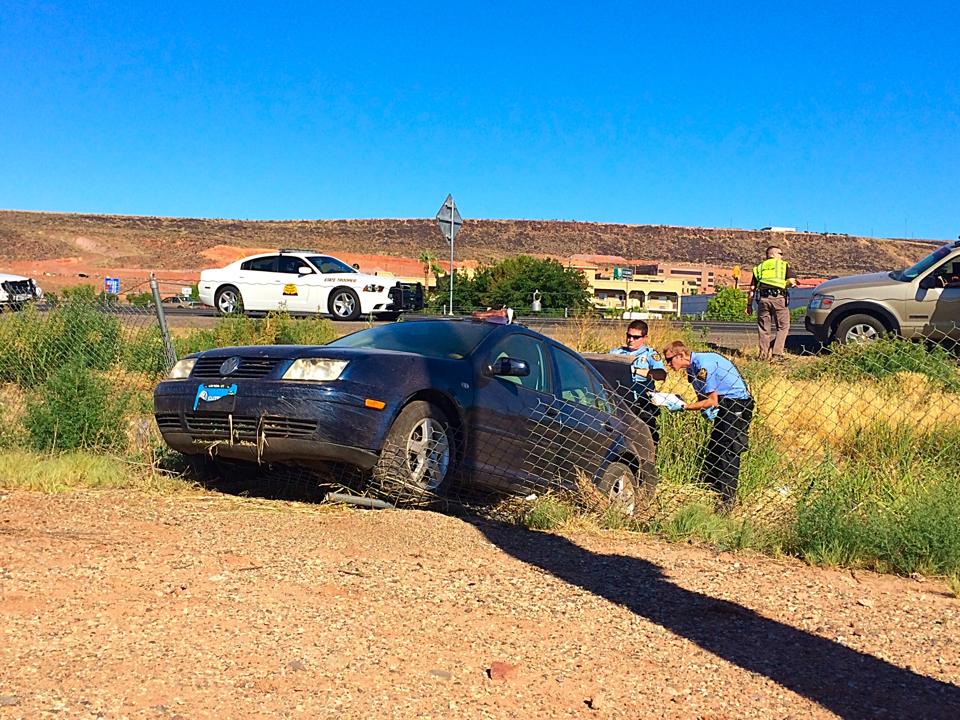 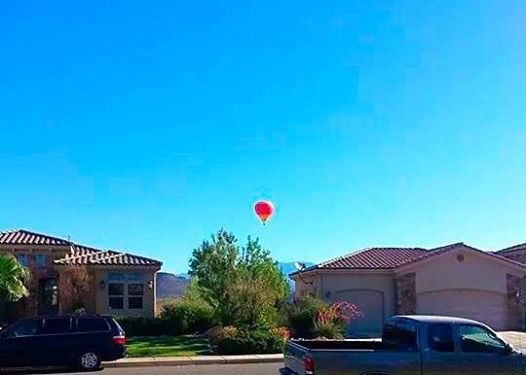 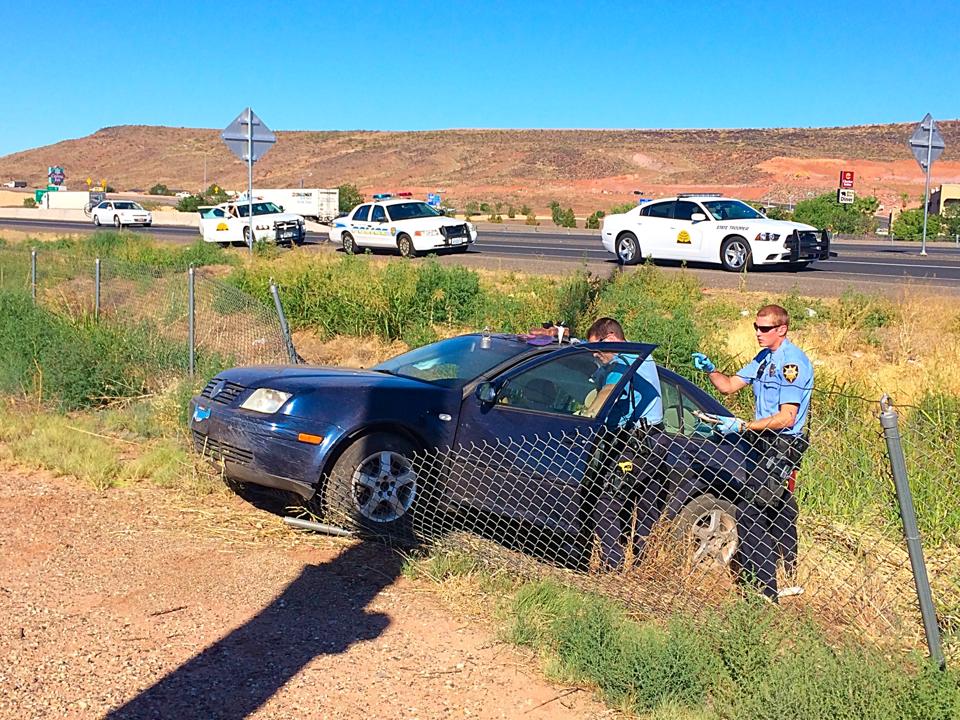 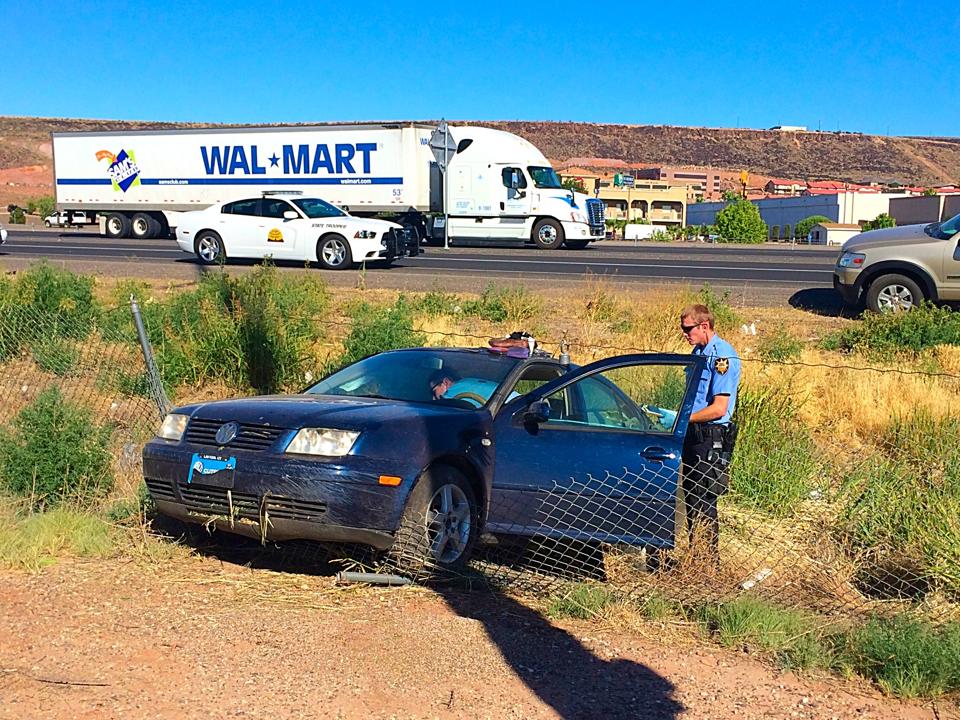 Police: Suspected hit-and-run driver nabbed north of Cedar City after ramming car from behind on I-15