BUNKERVILLE, Nev. – During a press conference held in the aftermath of Saturday’s standoff and the withdrawal of the Bureau of Land Management, Cliven Bundy thanked God and the prayers of supporters for the victory over the BLM. He also said county sheriffs throughout the United States should disarm the federal agencies within their counties.

“I’m going to give all the credit and my ability to my Heavenly Father and your prayers that have come to me and my family,” Cliven Bundy said. “I have, without a doubt, felt his presence in my decisions.”

Just over 20 years ago, Cliven Bundy drew the ire of the BLM for not paying grazing permits that had been modified to restrict how many cattle he could run on public lands. The modifications were made to benefit and protect desert tortoise habitat. The BLM has been trying to get Bundy’s cattle off of the public lands ever since. The agency’s latest attempt didn’t work out too well.

For his part, Cliven Bundy refuses to acknowledge any federal jurisdiction over public lands. He believes the land belongs to Nevada, and Nevada only. BLM need not apply. His view is that the public lands should be turned over to the states and that the federal government is overreaching. This view has resonated with state rights advocates and others.

As the BLM prepared to gather cattle – officially starting the roundup April 7 – the Bundys had already engaged in media warfare as they shared their cause over social media and with news outlets. Altercations between the BLM and Bundys and their supporters went viral online and resulted in a wave of Bundy supporters flooding into Bunkerville, Nev. Among these people were armed civilian militia who made it their job to provide security for the Bundy family. After a tense few days, the BLM withdrew from the area and released the cattle on April 12.

Videocast by Mori “I am not cameraman” Kessler, St George News

During the press conference, Cliven Bundy’s words drew an “amen” from a woman in the crowd as he spoke. With the 67-year-old rancher on the stand were Stewart Rhodes, of Oath Keepers, Richard Mack, of the Constitutional Sheriffs and Peace Officers Association, and Nevada Assemblywoman Michele Fiore who was accompanied by a delegation of other elected officials from Arizona and Washington state.

Cliven Bundy was referring to the demands he made of the sheriff, such as dismantling the National Park Service and disarming BLM rangers. Any collected firearms were to be taken to the Bundy Ranch.

He gave the sheriff an hour to comply and told the media to follow the sheriff and then report back. He said that if the sheriff didn’t deliver, the people were going to decide what to do next.

The nation and beyond witnessed the results of what happened next. Bundy supporters swarmed the area where the cattle were kept near Interstate 15 while cowboys on horseback approached. Militia men also arrived on the scene, though they positioned themselves away from the crowd pressing towards a fence that separated them from the cattle. They were repeatedly warned to leave by BLM rangers, or risk being fired upon.

Eventually Las Vegas Metro Police Deputy Chief Tom Roberts was able to broker a deal the Bundy’s accepted which allowed the cattle to be released, but not before the BLM was told to withdraw. The BLM was escorted out by the LVMPD. No shots were fired and no one was harmed.

“Once he was there, I knew we had won the battle,” Ammon Bundy said as he recalled the event. The deputy chief did the job Sheriff Gillespie didn’t, he said.

“If the sheriff had done his job, you wouldn’t have had to face those guns,” Cliven Bundy said to his family and supporters, many of whom were involved in the standoff.

Gillespie’s work isn’t done, Cliven Bundy said. The sheriff still has to disarm the “federal bureaucracies” within the county. “That’s a mandate for the sheriff,” he said.

The rancher then called upon every sheriff across the nation to do the same. He said the sheriff is the highest law enforcement officer in the county under the Constitution. Even federal agencies have to recognize and respect a sheriff’s authority, he said.

Richard Mack, former sheriff of Graham County, Ariz, also addressed the crowd and said federal bureaucracies, like the BLM, do not supersede the Constitution.

“We the people, with our sheriffs, should take back America.” Mack said

He said every sheriff in the nation should stand up and tell the federal government that what happened in Clark County will not happen again. He also called upon BLM rangers and other federal agents to quit their jobs if they ever face the possibility of pointing a gun at a fellow American.

Mack said many sheriffs are members of Oath Keepers, a group that includes active peace officers, military, first responders, and veterans who have vowed to uphold their oaths to defend the Constitution.

“They are the ultimate protectors of America – the sheriffs,” Mack said.

Michele Foire also shared a few words emphasizing the value of the 2nd Amendment and its relation to Saturday’s standoff.

“It is because of each and everyone of you standing here and each and everyone one of our Americans watching us and protecting us, with our firearms, why this did not turn into another Waco massacre or Ruby Ridge and I have to thank all of you for that,” she said.

Foire was referring to supporters of Bundy, which included Armed civilian militia men, some in groups, some independently, who began to converge on the Bundy Ranch after a recording of an altercation between the BLM and the Bundys last Wednesday went viral online. During the incident, Ammon Bundy was hit three times with a stun gun after kicking a police dog allegedly released on him by a BLM Ranger. During the same altercation, Margaret Houston, Cliven Bundy’s sister, was thrown to the ground by a ranger.

At the time, the Bundys were intentionally blocking a convoy of BLM vehicles, primarily a dump truck. Ammon Bundy said he caught a glimpse of debris in the back of the dump truck that resembled ranch infrastructure, namely water systems used for the cattle on the range.

He said at the press conference the BLM had taken out a watering station while the rest remained untouched.

Rhodes, the founder of Oath Keepers, said the Bundy’s cause, one laced with states’ rights issues, was much bigger than the matter of the BLM trying to remove a rancher’s cattle over unpaid grazing fees or the desert tortoise.

“It’s a western issue,” Rhodes said. “This is an attack on the entire West.”

Rhodes praised the Bundy family for “cowboying up” and taking a stand that others in the region wouldn’t. Their victory, he said, is incredibly important and needs to be spread across the West.

“What has to happen now, is the rise of the West.”

In the aftermath of the standoff between Bundy supporters and the BLM, Ammon Bundy said family and others were taking care of young calves who were born during the BLM’s impound. They were also busy reunited some calves with their mothers. While going through the corrals the BLM had set up, he also said they found a number of animals dead, and an entire corral full of injured animals. Elsewhere, they found a dead bull that had been shot from above, giving the impression it had been shot from a helicopter, he said.

Though the BLM has withdrawn from Clark County for now, officials have stated the agency will pursue the fight with Cliven Bundy “administratively and judicially.”

Ammon Bundy said that if federal agents came back and tried to arrest the Bundys, he predicts the action will only stir more support for their cause.

“If they do (arrest someone), it’s just going to bring three-to-four times as many people as there were this time,” he said, adding supporters may even protest outside any jail a Bundy is taken to. However, they wouldn’t be protesting on behalf of the Bundys as much as they would the idea that their struggle represented.

“It’s not because of us,” he said. “This has become a symbol of freedom against an over-reaching federal government, and the people are done with it.”

Click on any photo to enlarge it, then use your left-right arrow keys to cycle through the gallery. 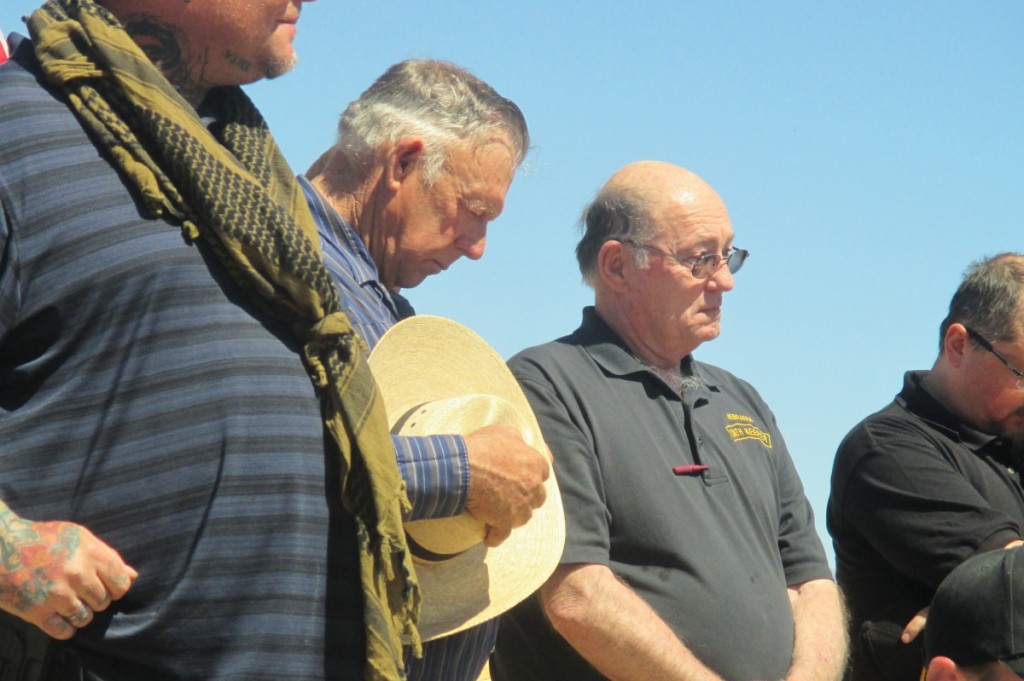 Cliven Bundy with head bowed during the prayer to at the start of the press conference. Bundy has referenced prayer and his belief in God throughout the conflict with the BLM, Bunkerville, Nev., April 2014 | Photo by Mori Kessler, St. George News 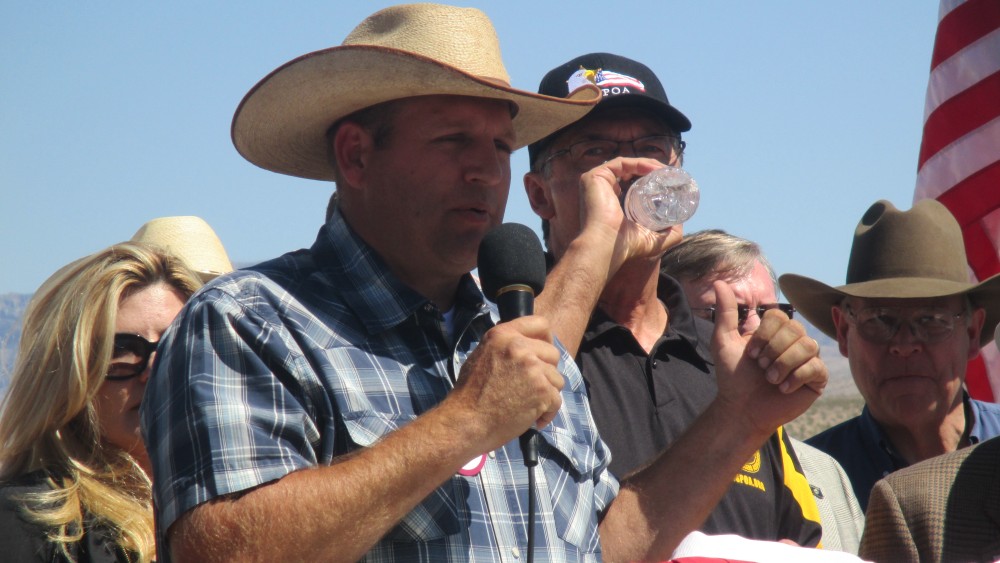 Ammon Bundy addressing the conference as he gave an update of events following the BLM's withdrawal. He also thanked people for their “tremendous outpouring” of support for the Bundy family, Bunkerville, Nev., April 2014 | Photo by Mori Kessler, St. George News 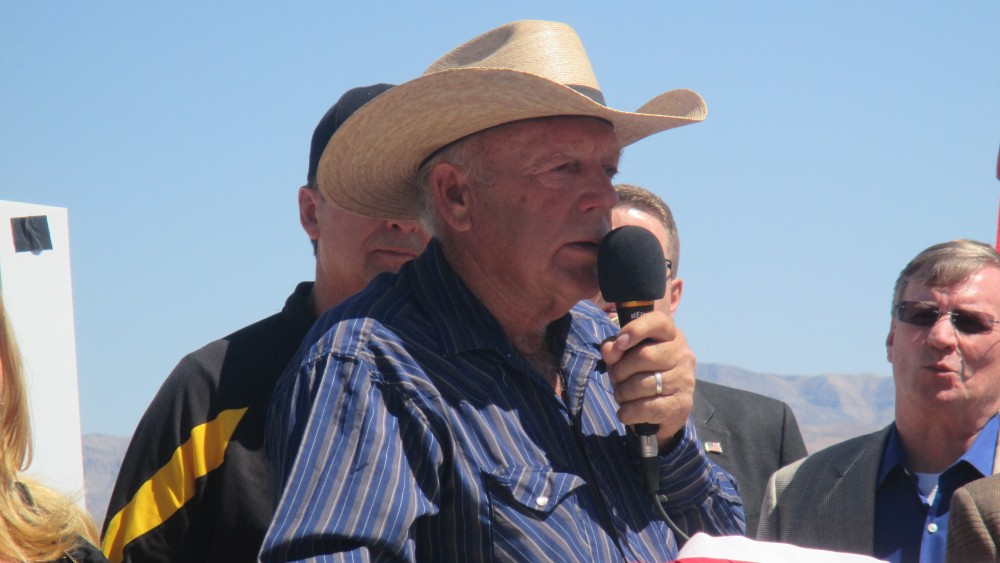 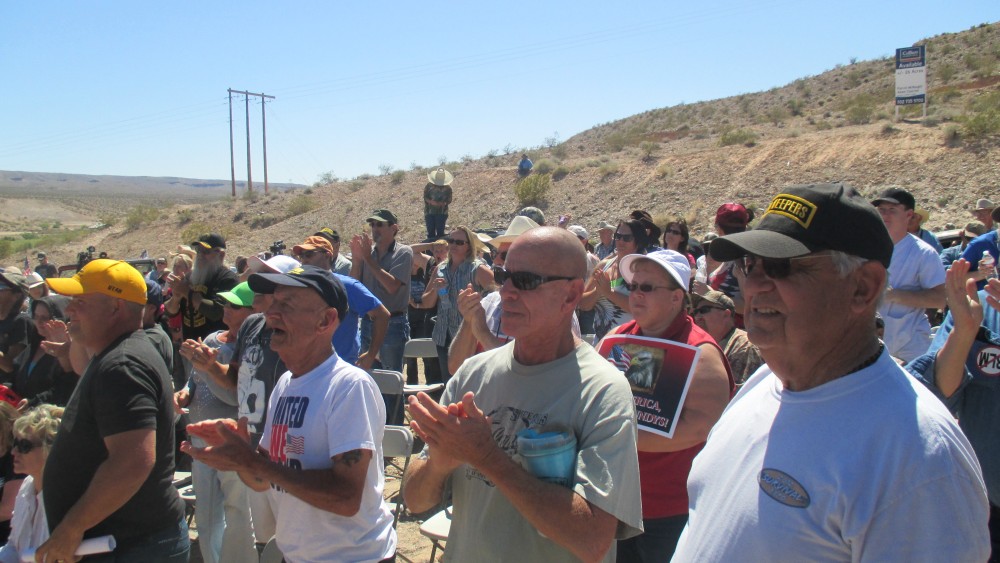 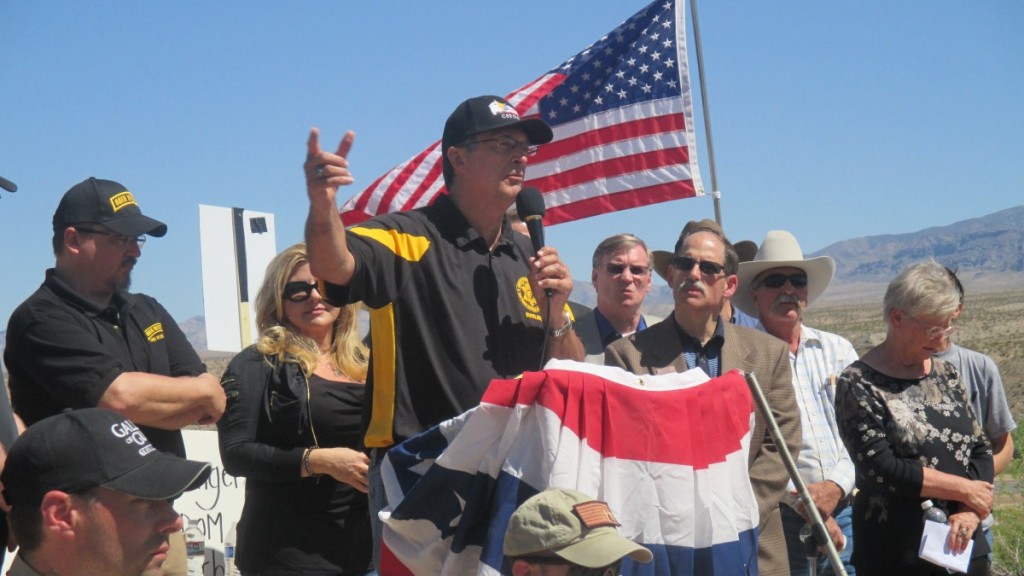 Richard Mack, of the Constitutional Sheriffs and Peace Officers Association, speaks on the importance of sheriffs in defending the Constitution, Bunkerville, Nev., April 2014 | Photo by Mori Kessler, St. George News 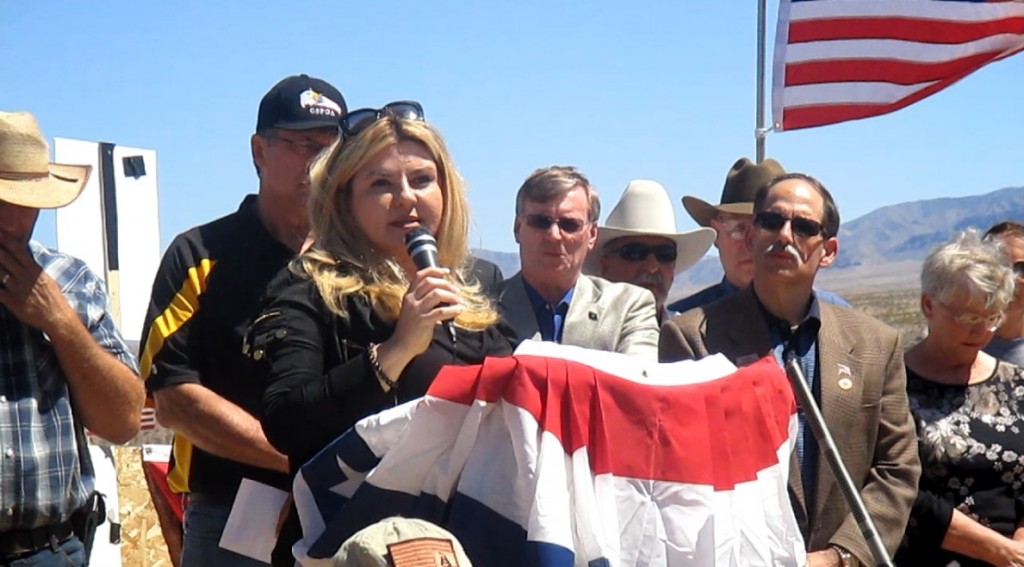 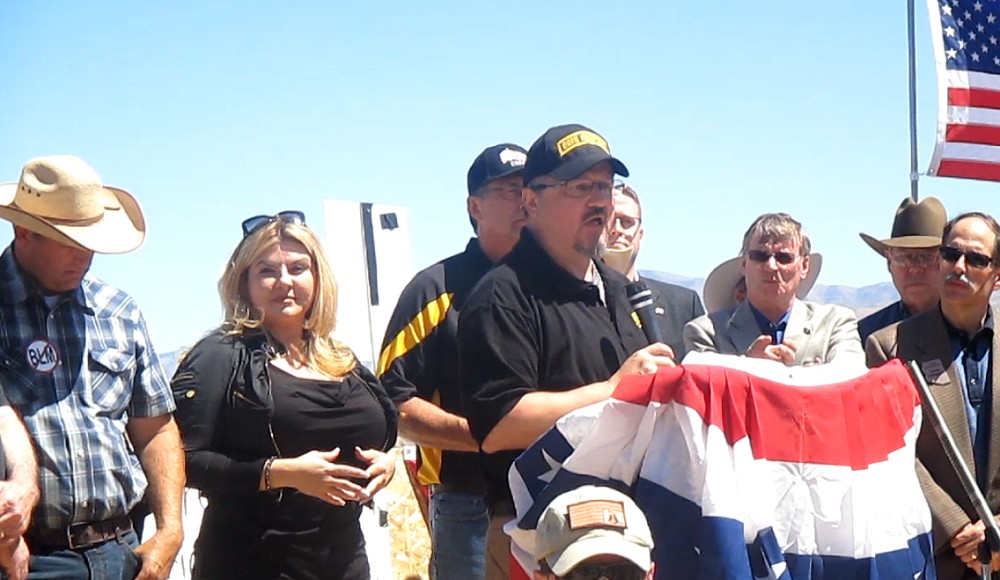 Stewart Rhodes, the founder of Oath Keepers, tells the crowd the Bundy's struggle, and by extension the struggle against overbearing government, isn't over, but just beginning, Bunkerville, Nev., April 2014 | Photo by Mori Kessler, St. George News 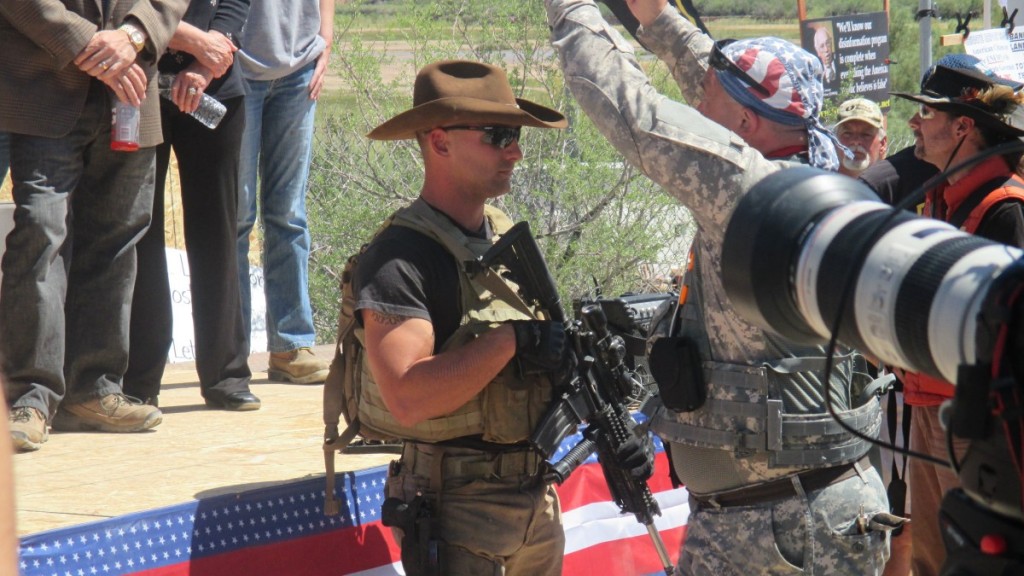 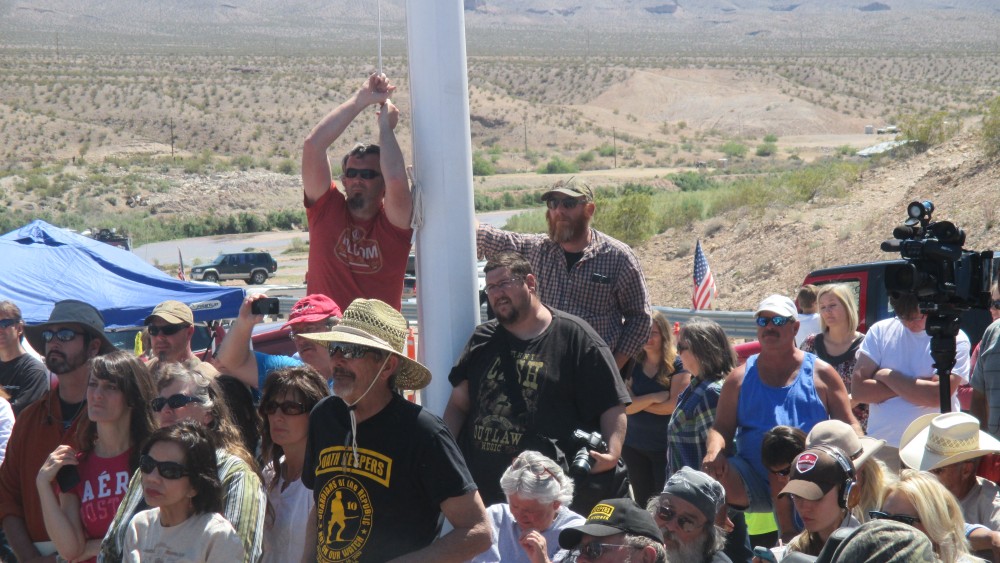 Supporters of the Bundy family gathered at the press conference. Many are from out-of-state and hail from places like Montana, New Hampshire, Connecticut, Washington state, Arizona, Colorado and Utah, Bunkerville, Nev., April 2014 | Photo by Mori Kessler, St. George News 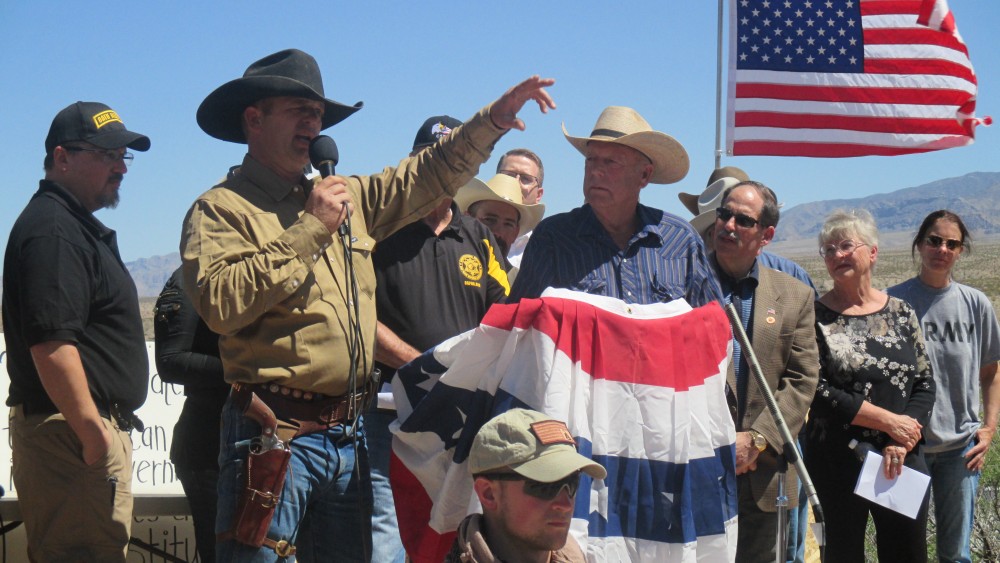 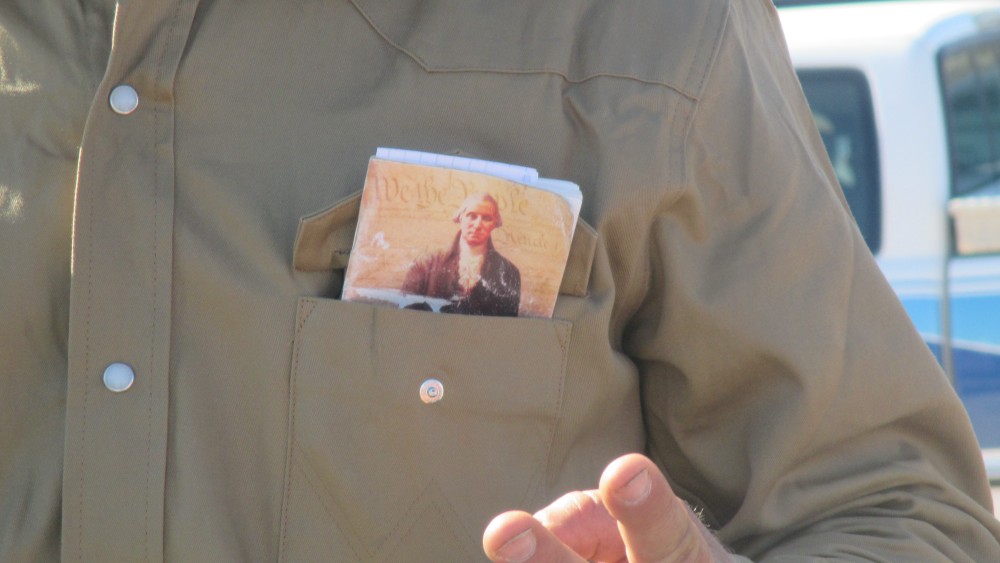 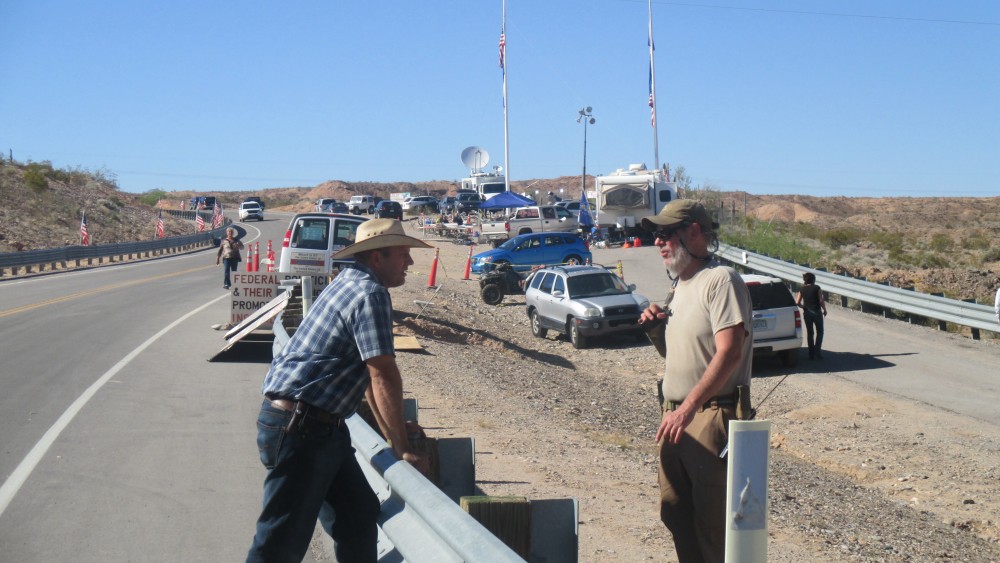 Ammon Bundy speaking with a militia man from New Mexico. The man is acting as security, along with other militia men posted throughout the area, Bunkerville, Nev., April 2014 | Photo by Mori Kessler, St. George News 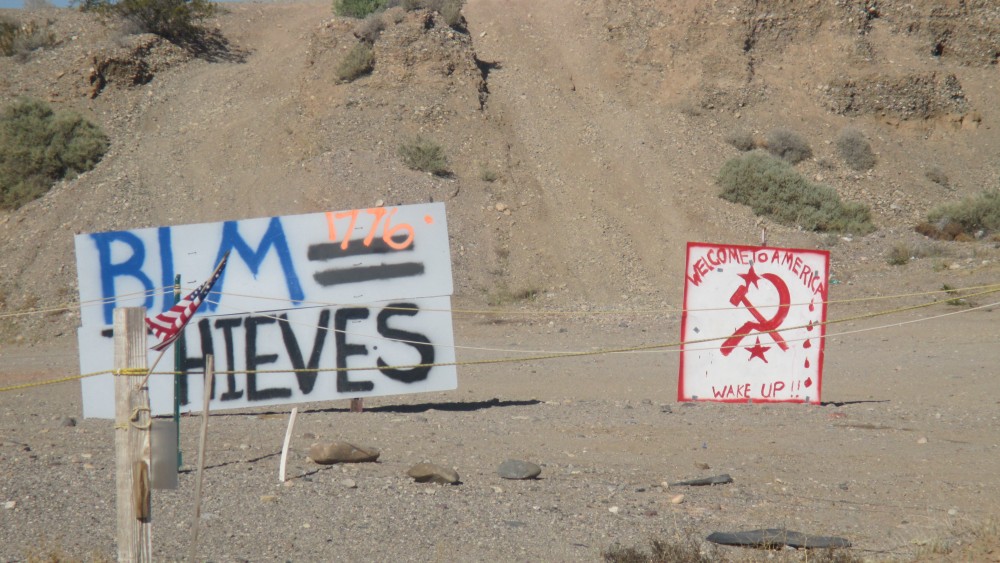 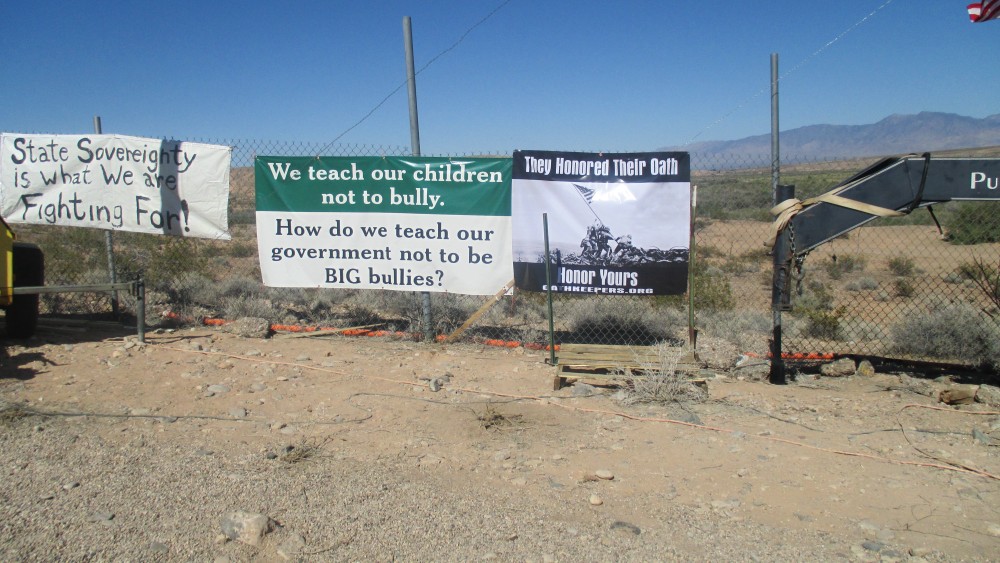 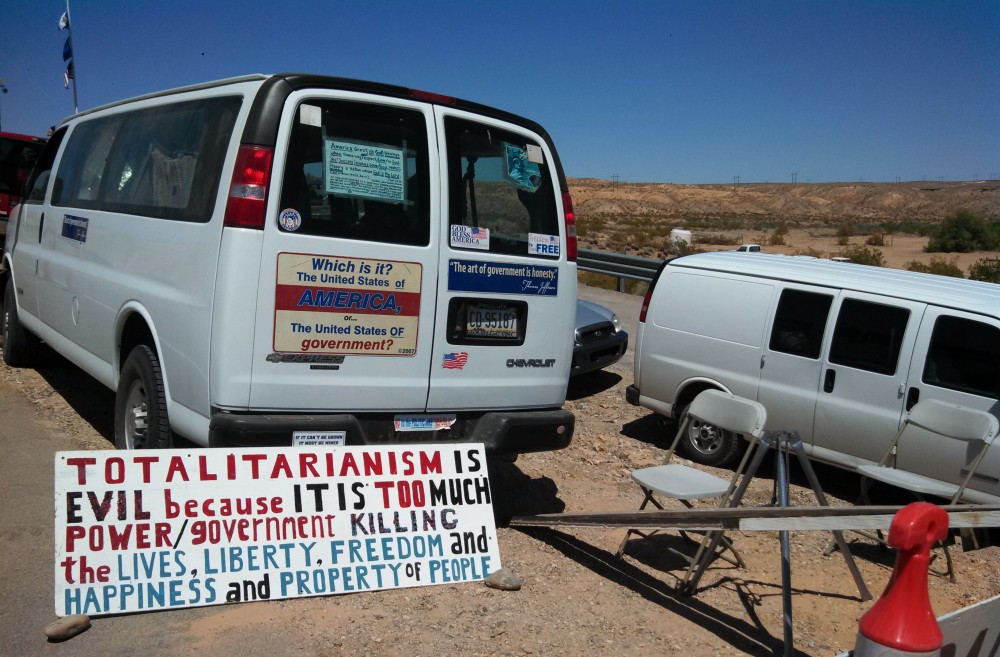 Do you hear what I hear? Sale of holiday tree permits on Utah public lands to begin