ST. GEORGE — A team can’t start much hotter than Chaminade did Saturday night at Burns Arena. It’s just a good thing for Dixie State that basketball games last longer than 10 minutes as the Red Storm overcame the fast start by the Silverswords and won going away 90-77 to improve to 19-4 on the season and grasp a firm hold on second place in the PacWest Conference.

The Chaminade Silverswords did not look like a team that had lost four of its last five games. Buoyed by the return of team leader Lee Bailey from a three-game team suspension, the ‘Swords hit 12 of their first 16 baskets to jump out to a 33-13 lead.

“Give them credit,” said Dixie head coach Jon Judkins. “They came out shooting very well. A lot of times when you get a player back, the team will respond with a great game. We had a couple of rotation problems, but for the most part, they scored against a good defensive effort on our part.”

Kevin Hu and James Harper scored 11 points apiece, including three 3-pointers apiece to fuel the run. The hot shooting would not last as the ‘Swords missed their next six shots.

“We knew that they could not keep shooting at that high percentage,” said Dixie’s Louis Garrett. “Our coaches told us to keep playing tough defense. They would start missing and our fast break would get going.”

The cold spell did allow the Red Storm to chip away at the lead. With 4:08 to play until intermission, DSU had cut the lead in half, 40-30. Garrett and Kimball Payne scored 8 and 6 points respectively, in the run.

“Garrett is a spark off our bench,” Judkins said. “He led our team in scoring at the beginning of the year and then he was setback with the injury. Well now he’s back. And he is stepping up offensively and defensively.”

The teams would trade baskets the remainder of the half and Payne’s layup with four seconds left to go cut the lead to seven, 47-40, going into the half.

Dixie State carried that momentum into the second half. The Red Storm burst out of the gates, outscoring Chaminade 16-8 over the first six minutes. Zach Robbins’ three-point play gave the Red Storm their first lead since early in the game, 56-55.

“Every team plays post defense differently,” Robbins said. “Chaminade did not front us down low, so the entry passes were much easier tonight. Kimball (Payne) especially got the ball to me in good position.”

The lead see-sawed back and forth for the next four minutes. Robbie Nielson’s two free throws at the 9:47 mark gave DSU the lead 64-63, but more importantly, sparked a 12-0 run. Chaminade got into early foul trouble and as a result, a parade of Dixie State players scored at the line. The run was capped by jumpers from Mason Sawyer and Curtis Papenfuss. With 6:46 to play, Dixie State’s lead reached double-digits for the first time, 74-63.

The Storm would maintain a comfortable lead the rest of the game, never letting it get below eight points. Dalton Groskreutz completed a rare four-point play, hitting the 3-pointer and drawing the fifth foul on Kuany Kuany. Groskreutz was also the recipient of Payne’s 12th assist when Payne found him all alone at the offensive end while breaking Chaminade’s full-court press. The resulting dunk gave Dixie State a 14-point lead with less than a minute to go, 89-75.

“Our 11 turnovers hurt us the first half. It resulted in 19 points for them,” Judkins said. “We took care of the ball the second half with only one turnover (resulting in two points).”

While Chaminade started the game hitting 7 of 8 beyond the arc over the first eight minutes, the ‘Swords could only manage 2 of 16 the rest of the way.

Chaminade’s Bailey led all scorers with 25 points. Harper and Hu scored 14 apiece. Tyree Harrison recorded a double-double for the ‘Swords with 11 points and 11 rebounds before fouling out.

With the loss, Chaminade drops its third straight, and five of its last six. CU drops to 13-11 overall, 10-6 in the PacWest Conference, in fourth place, a half-game ahead of BYU-Hawaii. Chaminade will return back to the islands for its last four games, beginning with Notre Dame de Namur Feb. 20.

The victory propels the Red Storm to 19-4, 13-4 in conference play. They remain in second place, two and a half games behind Cal Baptist. They will travel to northern California to take on Dominican Thursday night. The winner of that game will likely get the second seed and accompanying bye in the conference tournament. Dominican has won seven straight, including a win over the Red Storm on Feb. 1.

“It will be a good game,” Judkins said. “They are the hottest team in the league right now. We have been playing better since we last met.”

The Dixie State women’s team won its fourth straight with a win over visiting Chaminade. Haley Holmstead led all scorers with 35 points. Kaylah Miller scored 11. The Red Storm got 11 rebounds from Taylor Maynes as they out-rebounded Chaminade 48-27.

The loss drops Chaminade to 3-19, 3-13 in the Pac West. Dixie improves to 12-11, 10-7 in the PacWest. The Lady Storm sit squarely in the middle of the PacWest standings in seventh place, one game behind Fresno State in the loss column. They will get a rematch against Dominican, who upset the Lady Storm Feb. 1, 64-47. 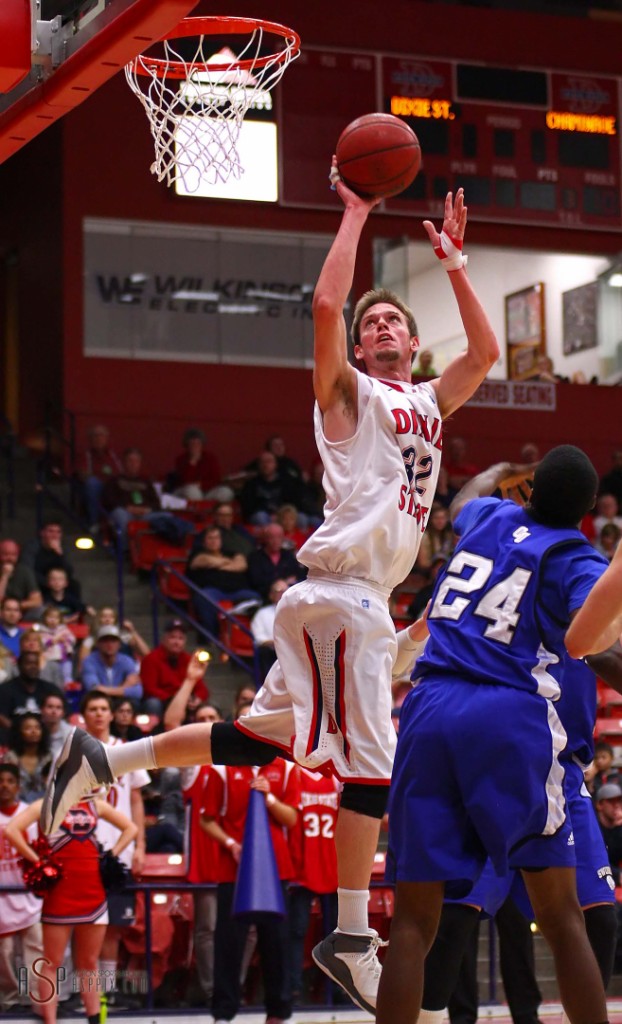 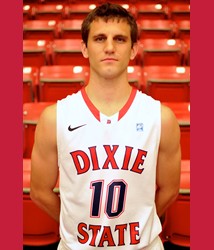 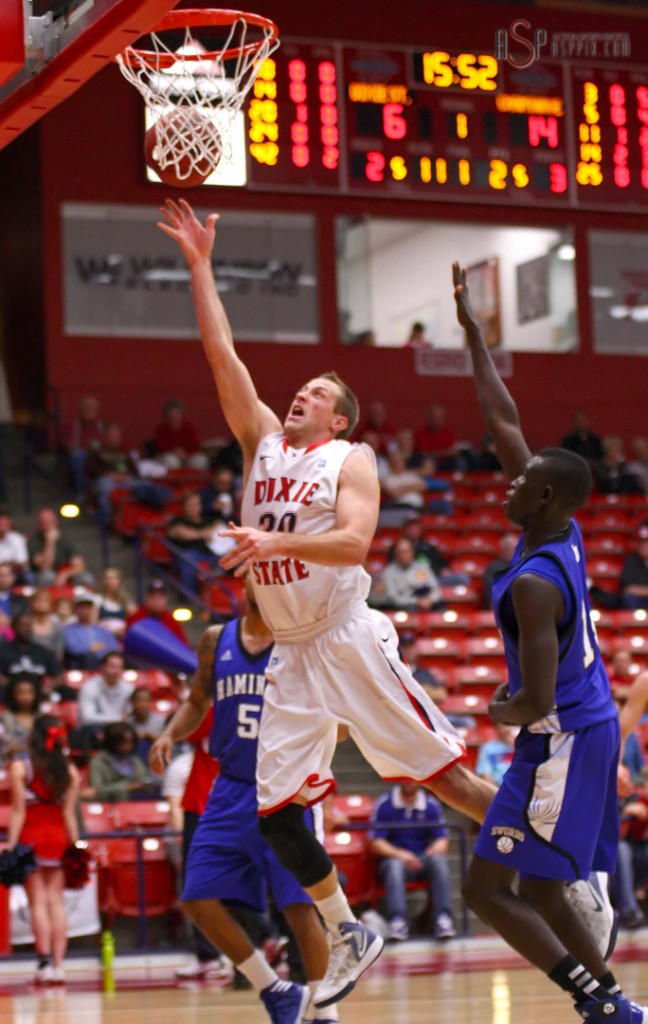 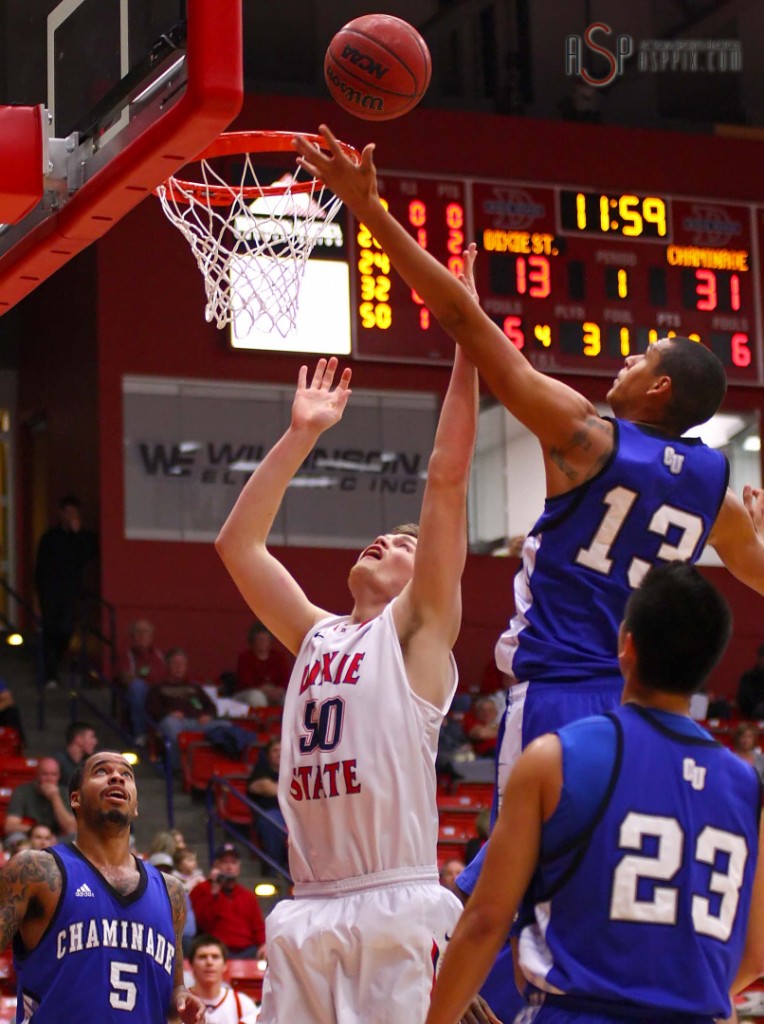 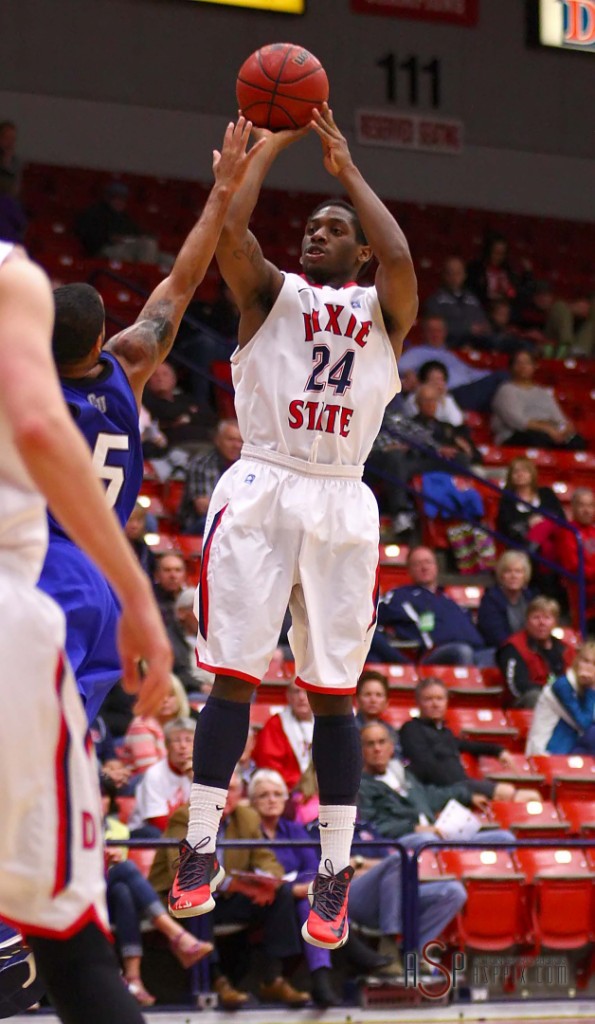 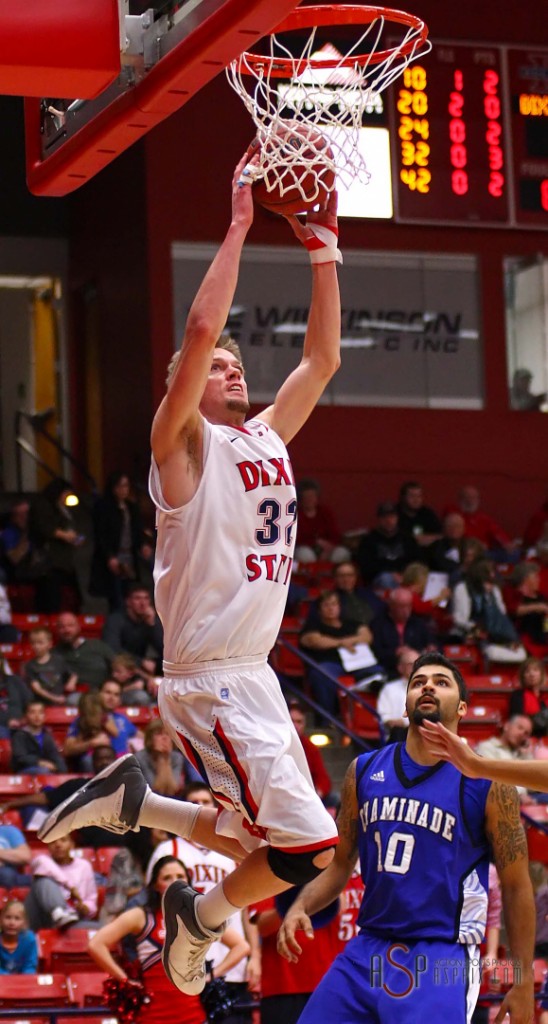 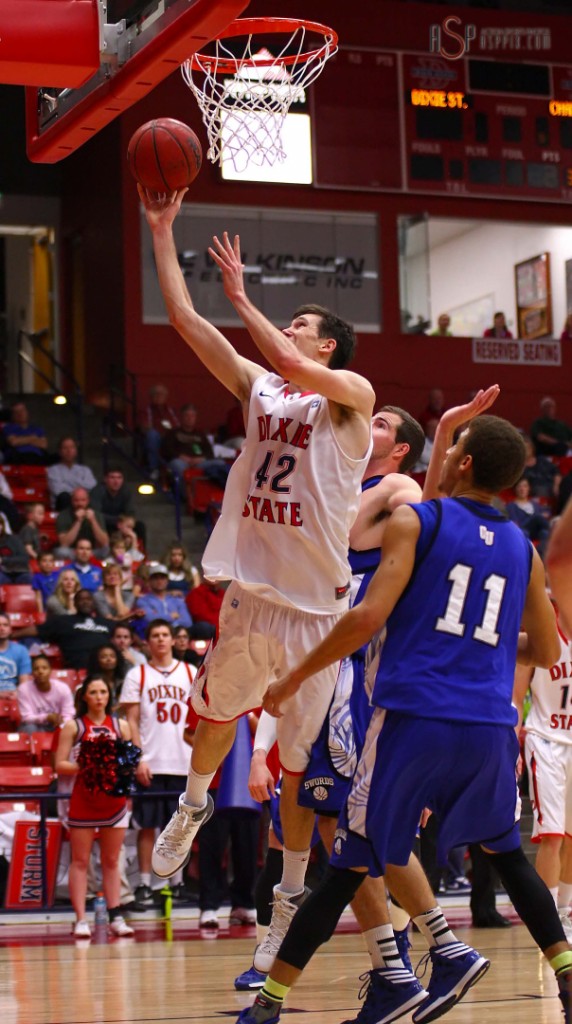