ST. GEORGE – All the emotion, all the noise, all the excitement and all the energy, but it really only came down to one thing: Did the ball get tipped in before the clock read zero-zero? And the answer was clearly no.

Ecstatically no for Snow Canyon. Frustratingly no for Dixie. Despite the valiant upset bid, SC had held on for a 67-66 Region 9 victory on a crazy night at the Jungle.

Snow Canyon and Dixie staged an epic rivalry game Wednesday night and with the game tied at 66-66, it game down to the closing moments. With seven seconds left on the clock, Snow Canyon’s Hayden Anderson went to the free throw line for two shots. With the game in his hands, Anderson’s first high arcing shot clanked off the front iron. Dixie head coach Ryan Cuff called a timeout. After the T.O., Anderson returned to the line and lofted his second shot. It was nothing but net.

With Dixie out of timeouts, the Flyers got the ball immediately to Tyler Bennett, who drove the length of floor, pulled up, looked to Jake Hawes who was covered and then shot an 18-footer from the right side. The ball hit hard and came off the weak side. The Snow Canyon crowd went nuts and the gym exploded. However, the Flyers’ Harrison Labrum had secured the rebound and quickly put the ball back into the hoop over Anderson.

The trail official ran to midcourt and emphatically gestured the basket good. This time, the Dixie fans went nuts as they ran out onto the court. While the pandemonium ensued, the officials conferred and approached the scorers’ table. The announcer then confirmed the reversal of the call, denying Dixie the basket and the victory. Video replay confirmed the call as Labrum still had the ball in his hands as the clock hit :00 and the horn could barely be heard over the Warriors fans, who had already begun their celebration with the Bennett miss.

“I did not even see the putback,” said Warriors coach James Brown. “I saw Bennett’s shot come off and I thought the game was over. I had turned around relieved. Then of course I saw the Dixie fans cheering.”

“I was happy I hit that second free throw, but I knew they still had a chance,” he said. “When Labrum got the putback, all I could think was ‘Dang, I should have hit the first free throw.’ Then they called (Labrum’s putback) no good and then it was at first relief, then back to happy.”

The entirety of the game was filled with fast-paced action and drama with neither team able to pull away. Warriors center Nate Gottfredson scored two baskets early to give Snow Canyon a 6-2 advantage after two minutes. Anderson and Brock Staheli also hit two buckets apiece late in the quarter. But Dixie led after one, 18-17, behind seven points each from Hawes and R.J. Wilgar.

The hot scoring continued in the second quarter with the teams playing to a draw, 20-20. The Warriors got scoring from six different players while Dixie was paced by Bennett, Wilgar and Nate Crockett, scoring 8, 5 and 5 respectively in the quarter.

Coming out from halftime, the Warriors had their two post players, Gottfredson and Anderson, laden with three fouls apiece. It did not take long for Gottfredson to get his fourth. At the 5:59 mark he was replaced by Staheli. Staheli would score the last seven points of the quarter for the Warriors. The Flyers got all of their point production from Wilgar with seven, and Hawes with six. At the end of three, Dixie still held the slimmest of margins, 51-50.

Gottfredson began the fourth quarter on the floor. That paid immediate dividends as he scored the Warriors’ first basket of the quarter. The teams traded baskets over the first four minutes, but a 3-pointer by Labrum at the 3:48 mark gave Dixie a four-point lead, 61-57. After a Warriors turnover, Wilgar drew a fifth foul on Gottfredson with 2:48 to play. Wilgar drained both free throws and Dixie had its biggest lead at six.

On the ensuing possession, Jake Frei came off a double screen and hit a 3-pointer to halve the Flyer lead. Cuff had his back court players pull the ball out and take time off the clock. Snow Canyon fouled Wilgar with 1:38 to go. Wilgar drained both shots and the Dixie lead was five, 65-60.

Dixie held on the next possession, but Tanner Sampson stole the outlet pass and fed Anderson who was immediately fouled. Anderson connected on 1 of 2 and the lead was at four. Dixie again went into a controlled stall and drew another foul. Bennett hit the first free throw. On the second free throw, the ball came off the left side and both teams dove and scrambled for the ball. The ball ended up in the hands of Warriors point guard Chase Jenkins. He immediately found Sampson, who had slipped ahead of the pack during the scramble. His 3-pointer with 1:02 to go narrowed the Flyers lead to two, 66-64.

On Dixie’s next possession, Jenkins stripped the ball from Wilgar and pushed the ball ahead to Sampson who hit the layup. The basket was called off though as a foul had been called against Wilgar prior. It was Wilgar’s fifth and would prove to be costly. Sampson went to the charity stripe and missed both shots. Hawes snatched the rebound, but his outlet pass was intercepted by Sampson, who found Anderson underneath for two and with 48 seconds left the game was knotted at 66.

Dixie ran the ball down to 11 seconds before calling their final timeout. On the inbounds pass, Sampson again came up big with a deflection and steal, his third steal in the last three minutes. He got the ball ahead to Anderson who was fouled, setting up the final seven seconds.

“Tanner (Sampson) has been ill,” Brown said. “So we did not give him his normal allotment of minutes. But the minutes he gave us proved to be the difference. Three big steals and that 3-pointer.”

Setting up the defense during the timeout, Brown put it on his players.

“I told them we were going man to man,” he said. “Fortunately (Wilgar) had fouled out, so their best options narrowed from three to two. I told them to get a stop on (Bennett) and to face guard Hawes. They defended the last play very well.”

Wilgar led all scorers with 26 points. Hawes joined him in double-figures for Dixie with 18. Staheli led the Warriors with 17. Frei and Anderson scored 10 apiece.

The loss drops Dixie to 10-9 overall, 3-7 in region play. The Flyers will be in action again Feb. 12 when they host Canyon View. Snow Canyon elevates to 12-6 overall, 7-2 in region. They will travel to Hurricane on Friday. 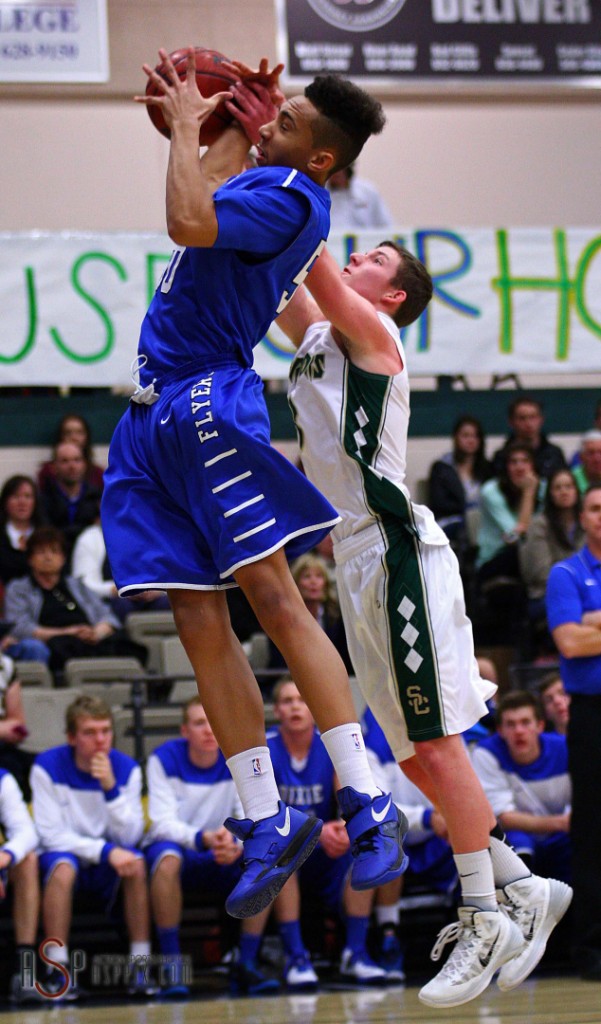 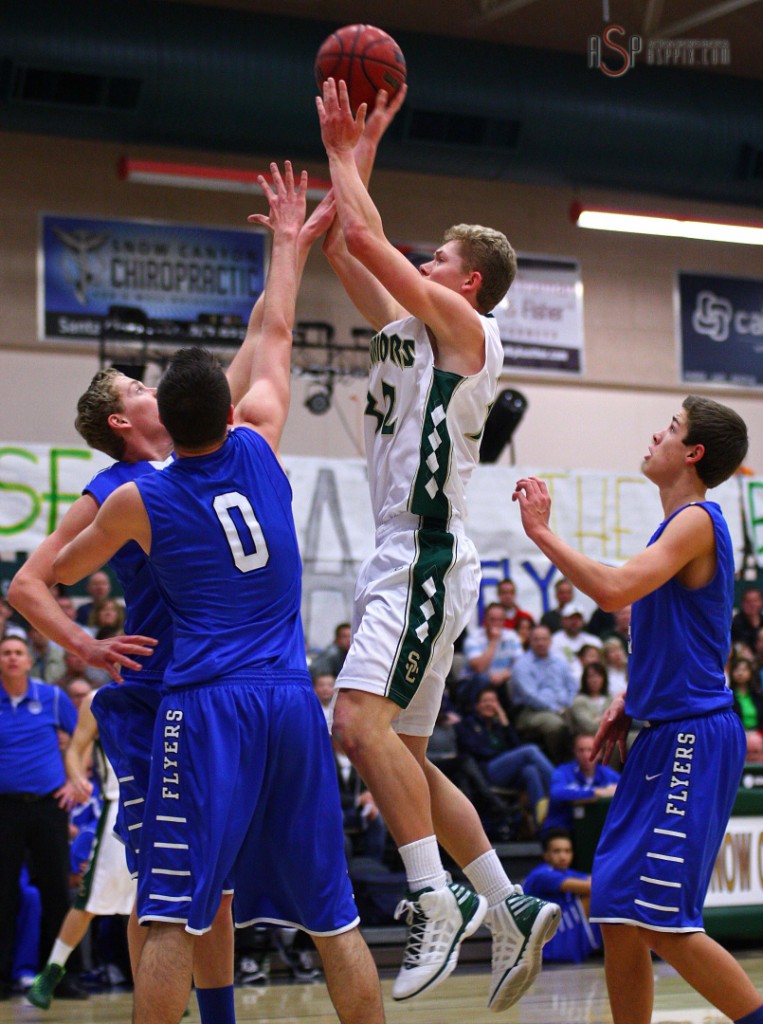 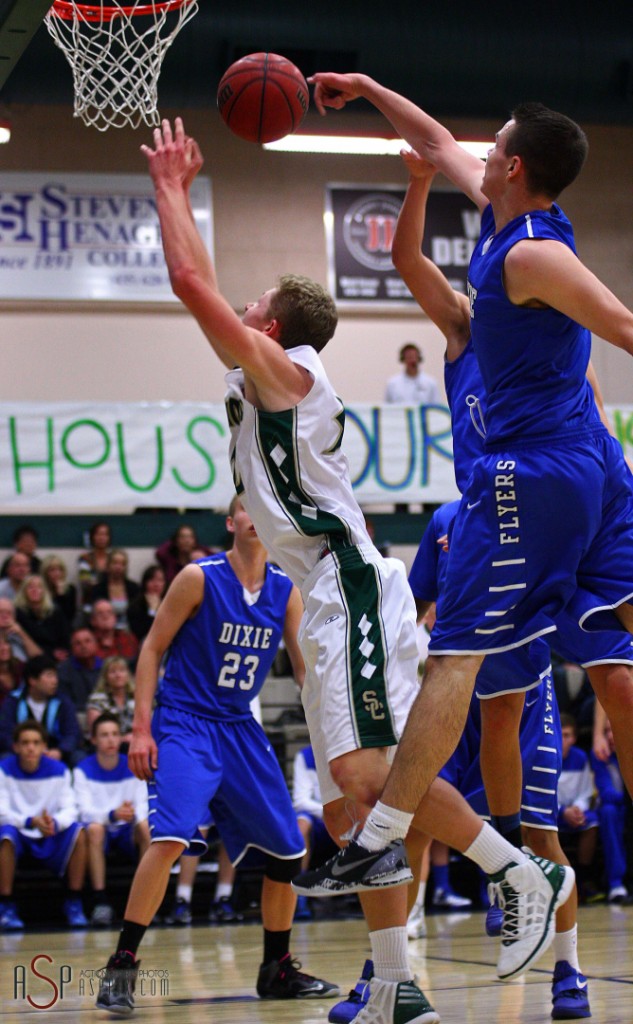 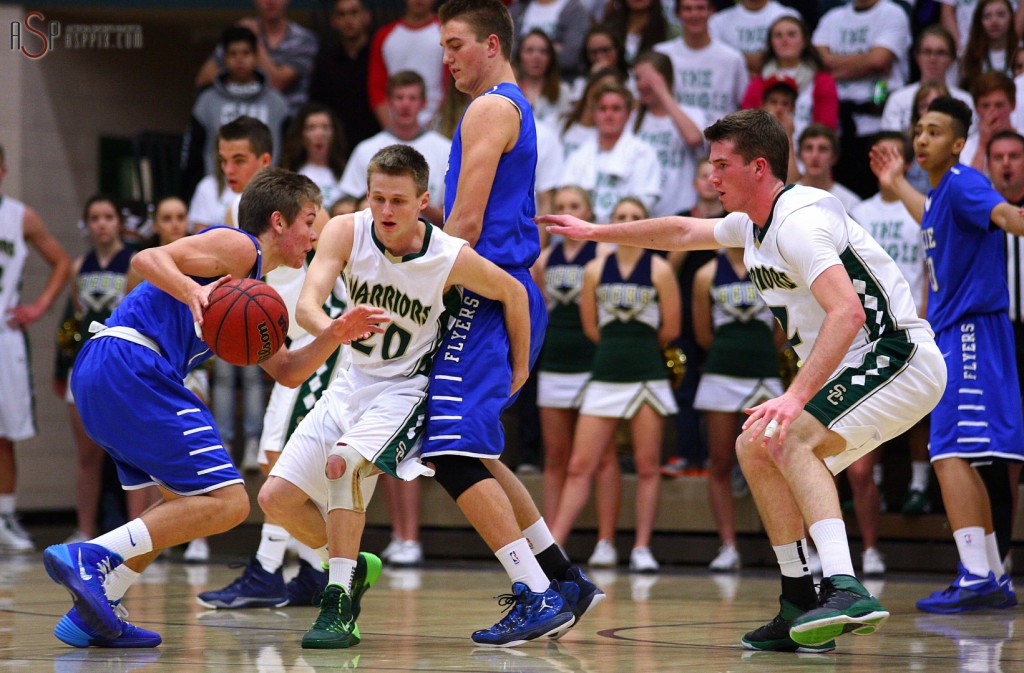 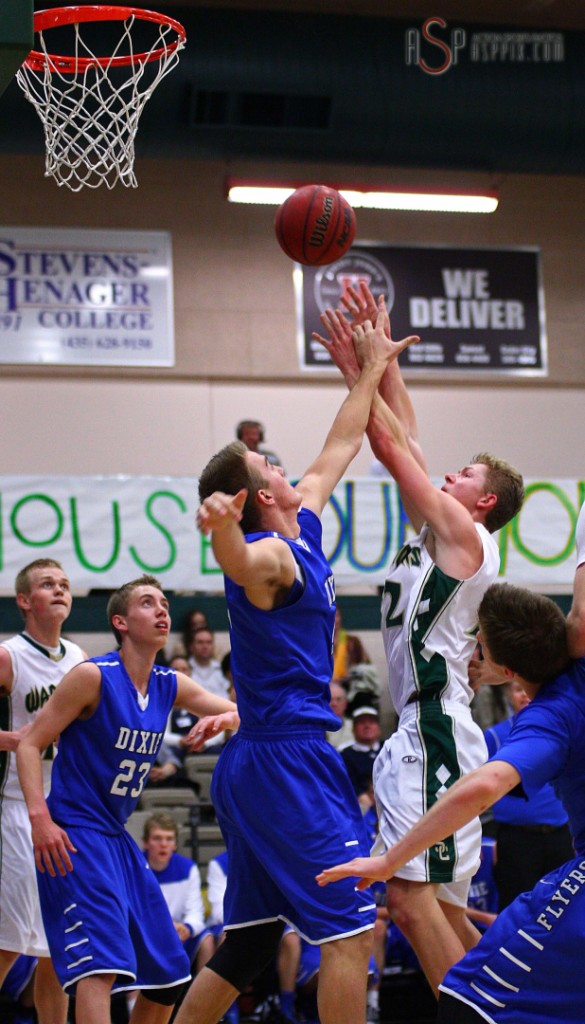 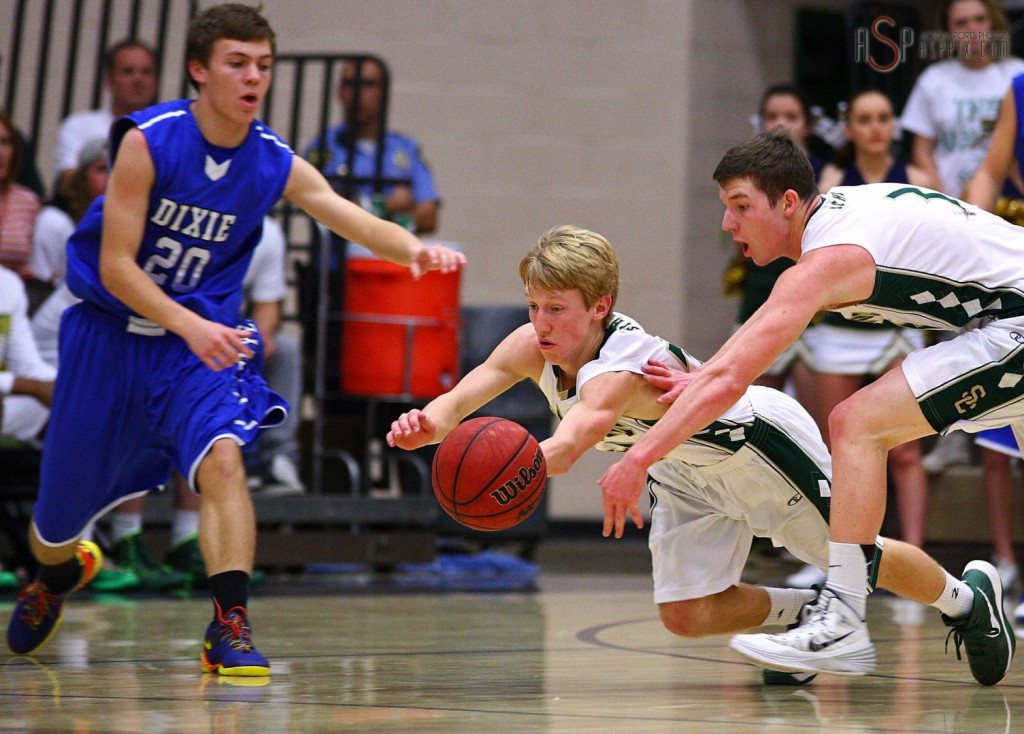 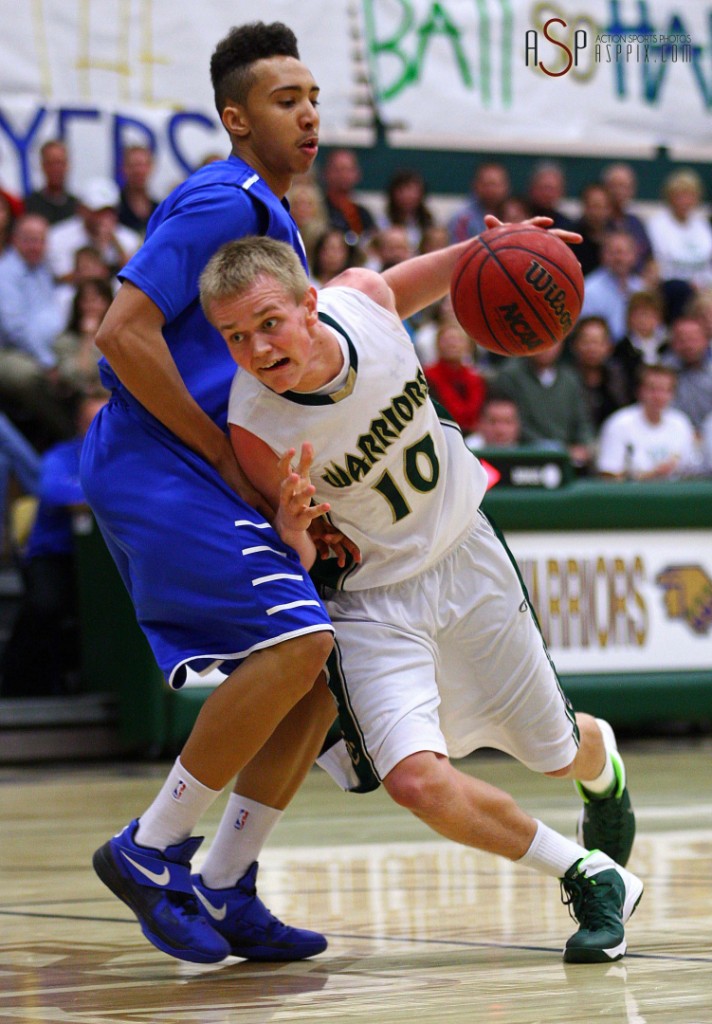 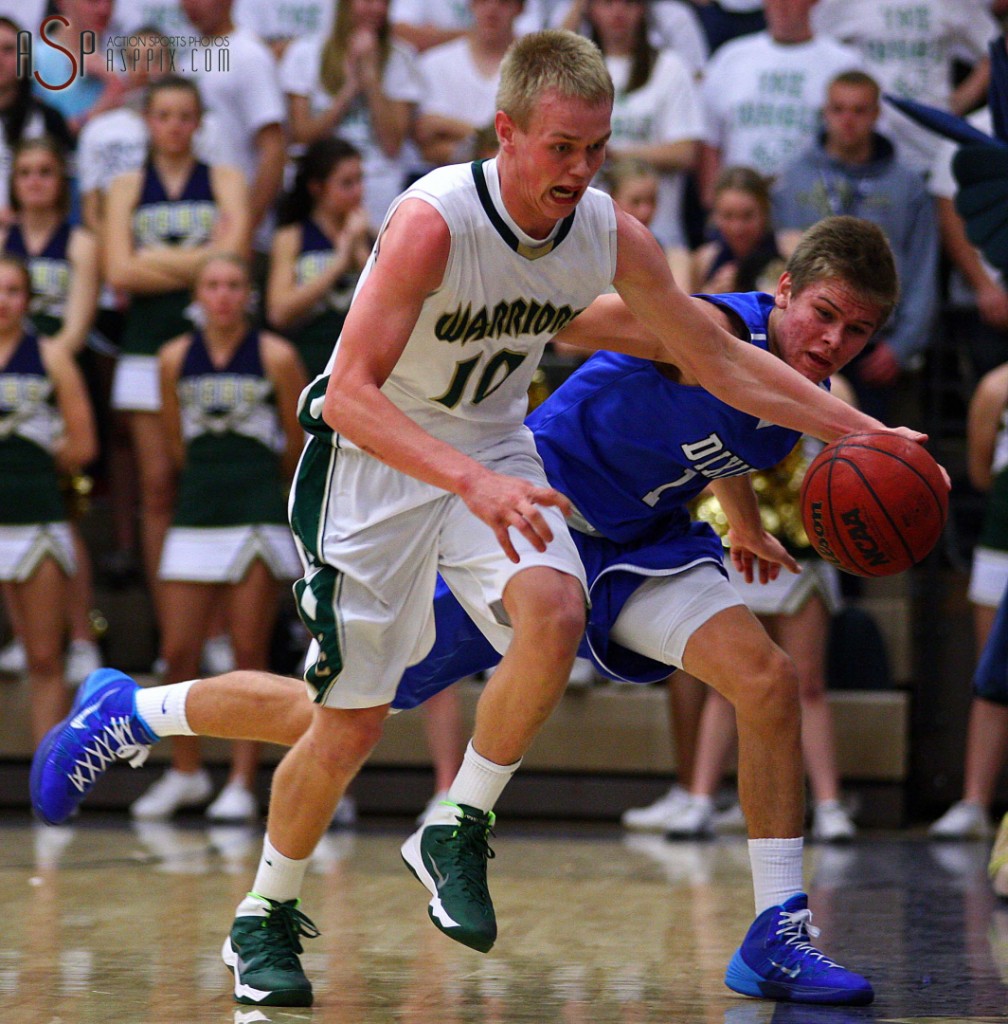 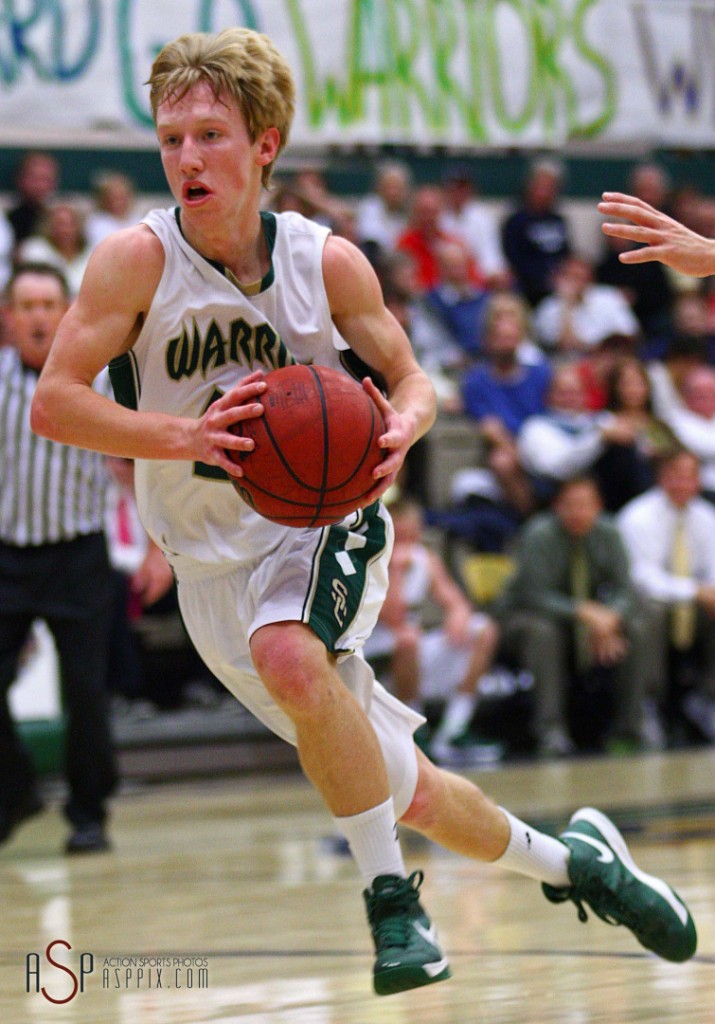 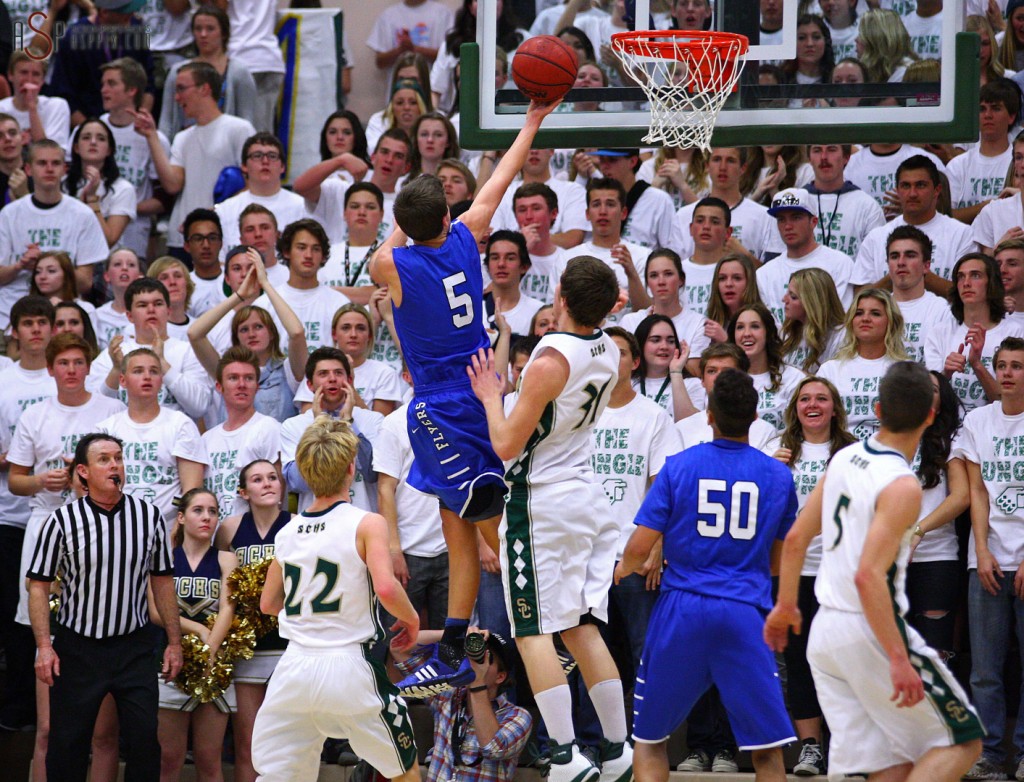