HURRICANE – It was an offensive smorgasbord Thursday night in a game where each team had only one turnover and each team only punted once. The final outcome of the Pine View-Hurricane game came down to which team scored last.

The Panthers, as it turned out, were that team as Kody Wilstead rushed it in from a yard out with 32 seconds left in the game and Pine View escaped Hurricane with a 34-31 victory.

Hurricane took a 31-28 lead on fullback Jeremiah Ieremia’s dive from the 1-yard line. The only problem: Pine View quarterback Kody Wilstead still had 2:46 left on the clock. Nine plays later, Wilstead faked the dive to running back Pano Tiatia, the Tiger defense bit, and Wilstead sauntered unscathed into the end zone for the 34-31 final score.

“It was just an overall great team effort,” PV coach Ray Hosner said. “We knew eventually we’d get the ball where it needed to go and be able to score.”

Jack Bangerter had a phenomenal game for the victorious Panthers, grabbing 17 catches for 268 yards and four touchdowns. All those catches came from sharp passes off the right hand of Wilstead, who had 480 yards through the air in the game. Bangerter also intercepted Hurricane’s last-gasp pass attempt in the game’s closing seconds.

The game started with both sides trading field goals. Pine View kicker Ethan Baer got on the board first with a 20-yarder. Hurricane kicker Ethan Stratton followed suit with a 33-yard field goal. On the Panthers next possession, Wilstead drove the team 80 yards, connecting with Bangerter for the first of four touchdowns. Baer’s PAT was blocked, but the Panthers finished out the quarter up 9-3.

Pine View would threaten again, getting into the Hurricane red zone with 8:30 to play in the second quarter. A Tiger defensive back intercepted Wilstead in the end zone, resulting in a touchback. On the following play, Ieremia found a hole up the middle and rumbled 80 yards for the touchdown. After an unsuccessful PAT, the score was knotted at 9-9.

The Hurricane defense held on Pine View’s next possession. The Tigers offense took over on their own 22. Eight plays later, Ieremia punched it in for a 16-9 lead with 1:45 left in the half. Wilstead took less than a minute to drive the field for the final score of the half, a 30-yard strike to Bangerter to knot the score at 16-16. On the pass, Wilstead was flushed out of the pocket before throwing a pass that traveled 45 yards and found Bangerter in the back of the end zone.

“The play was designed for a double move,” said Bangerter. “Kody and I had been setting them all night with crisp passes on quick outs. It set the play up perfectly for out and up.”

That drive would be a presage for what was to come in the fourth quarter.

After the break, both teams traded drives much of the third quarter without success, until Wilstead found Bangerter for their third touchdown of the night with 14 seconds to go in third. The PAT was unsuccessful and the Panthers led 22-16. On the Tigers first possession of the fourth quarter, Ieremia scored his third touchdown on a 24-yard jaunt. Stratton’s PAT was successful and Hurricane found itself ahead 23-22 with 9:55 to play.

On the ensuing possession, Wilstead hooked up with Bangerter on their fourth touchdown of the game,a 2-yarder. The two-point conversion failed and Pine View led 28-23.

Hurricane would take possession of the ball with 6:33 left in the game and march 68 yards in eight plays. Ieremia would score his fourth rushing touchdown of the game, this time the short dive. After a successful 2-point conversion run by Cody LeBaron, the Tigers led 31-28, setting up Wilstead’s heroics on the final drive.

“Jack normally does not play defense,” Hosner said. “But I told him we needed him and he stepped up. His interception sealed the win.”

The loss dampened the performance of Hurricane’s Ieremia as he ran for 209 yards and four touchdowns on 18 carries, by far his best game rushing the ball. Quarterback Adlai Elison completed 6 of 10 passes for 132 yards. Wide receiver Noah Elison had three receptions for 84 yards.

Tristan Duran stepped in for the injured Bladen Hosner and finished the night with six receptions for 100 yards to go with 31 yards rushing on three carries.

Pine View, which finished the night with 581 yards and 28 first downs, moves to 6-2 overall and 4-1 in region. The Panthers will host Payson next Wednesday to wrap up the regular season. PV has a bye on Oct. 25.

The loss drops Hurricane to 1-7 and 1-4. The Tigers, who had 441 yards of offense including 309 rushing, will host Logan Wednesday in a non-region game. 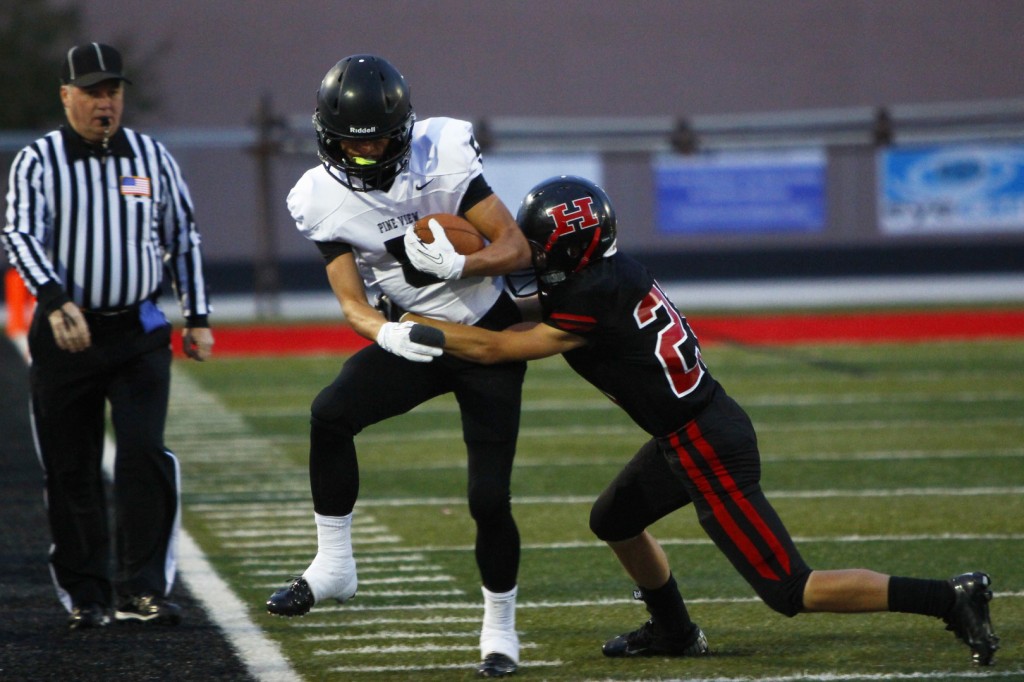 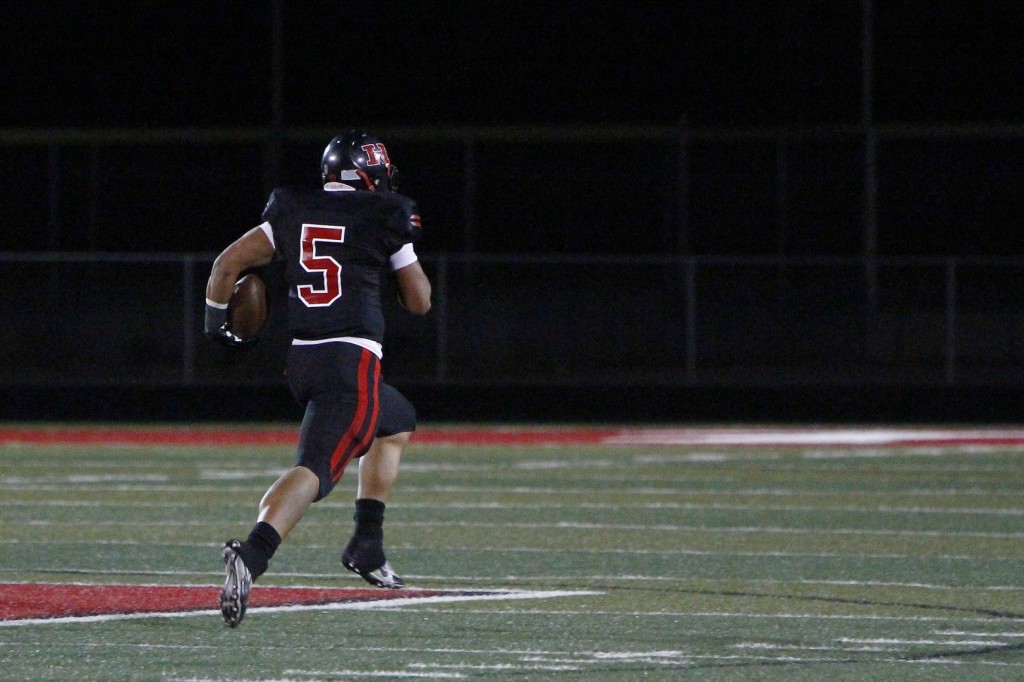 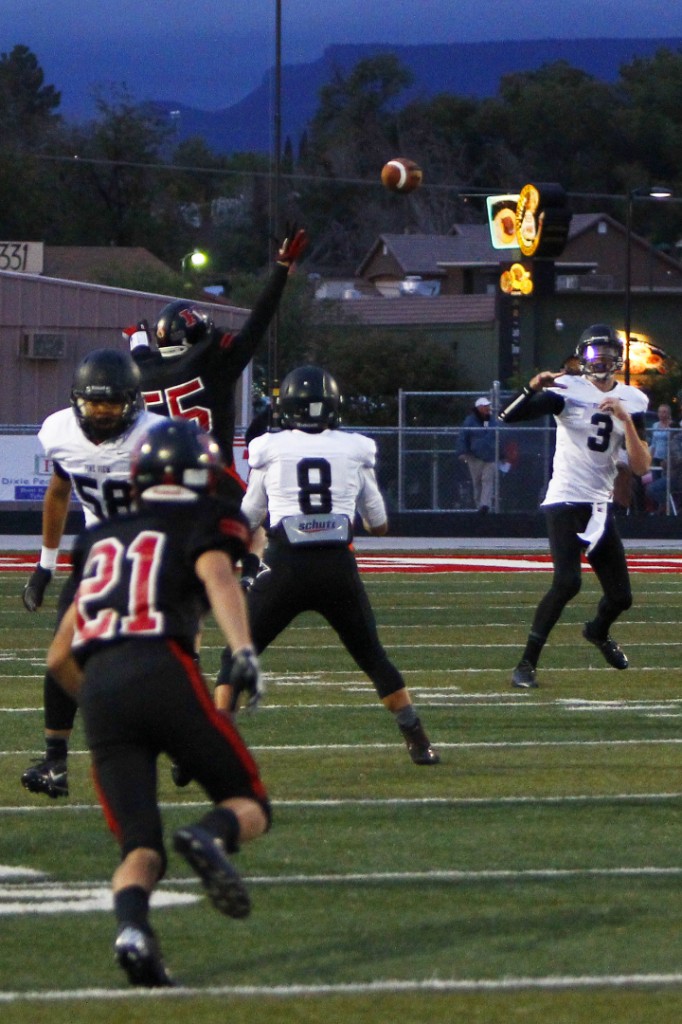 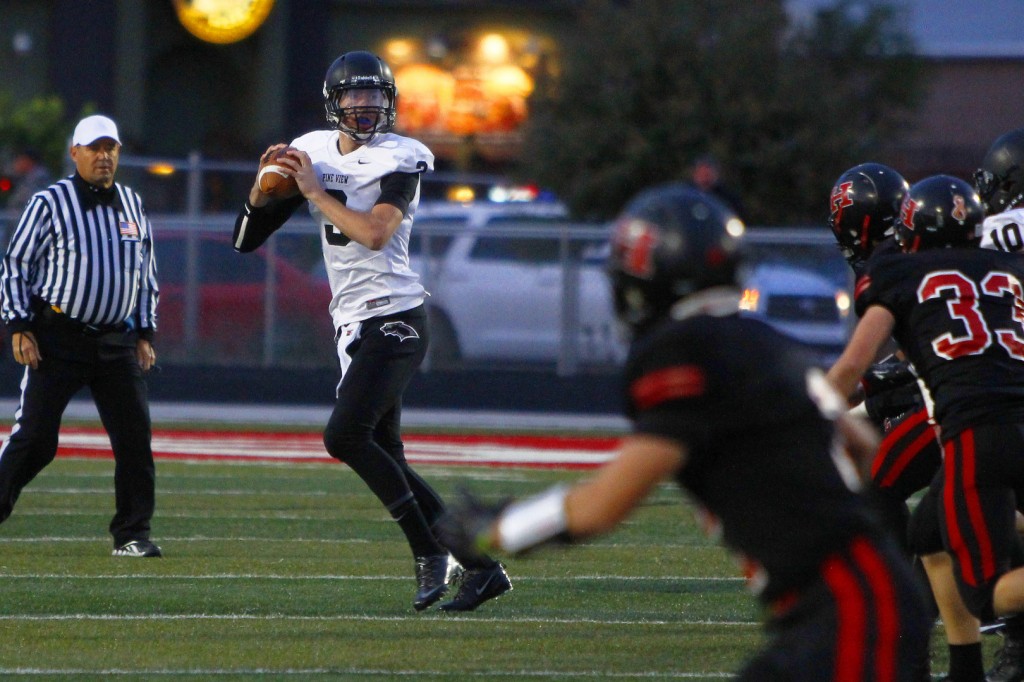 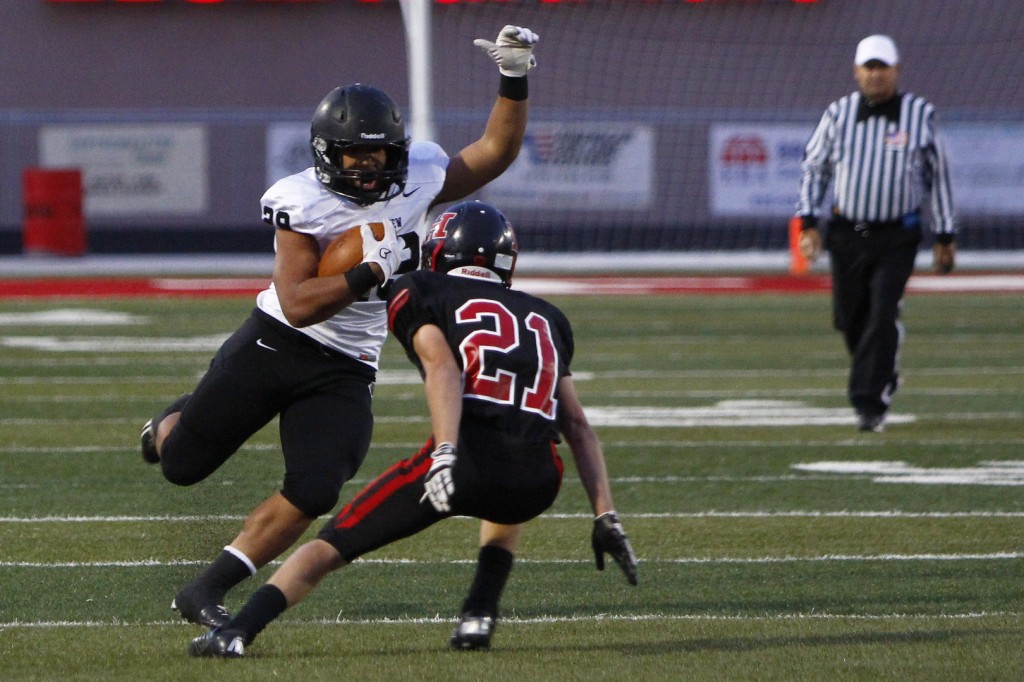 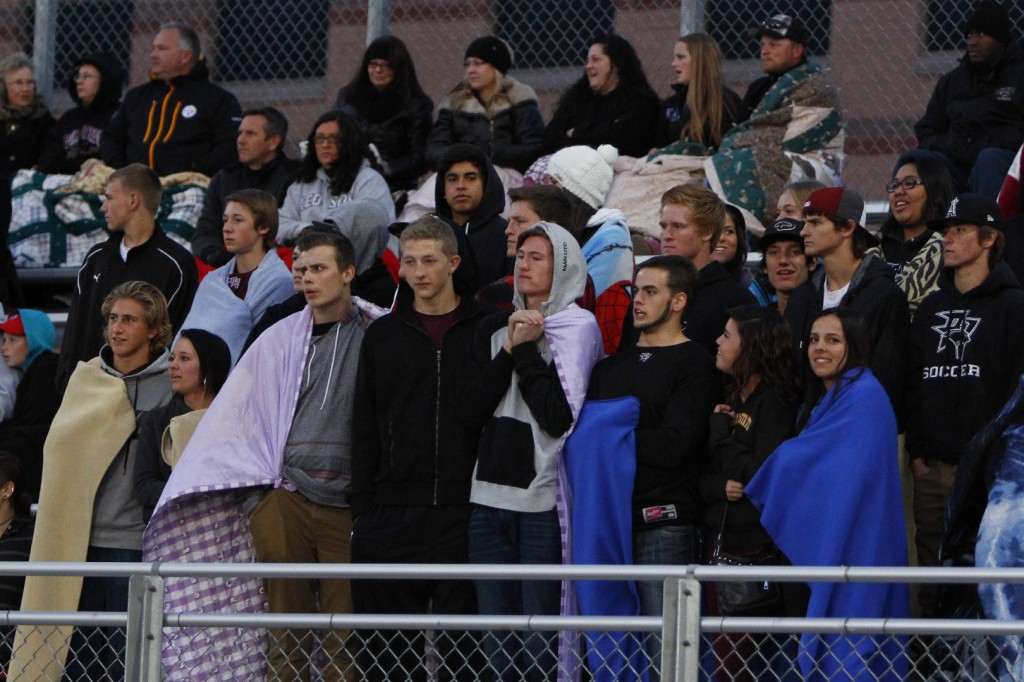 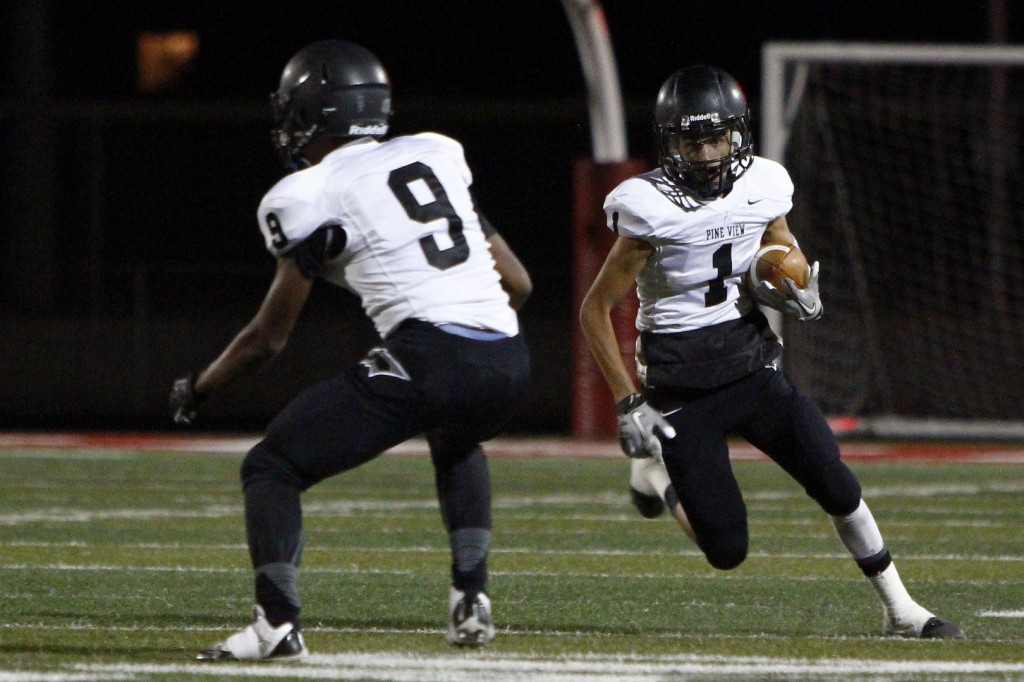 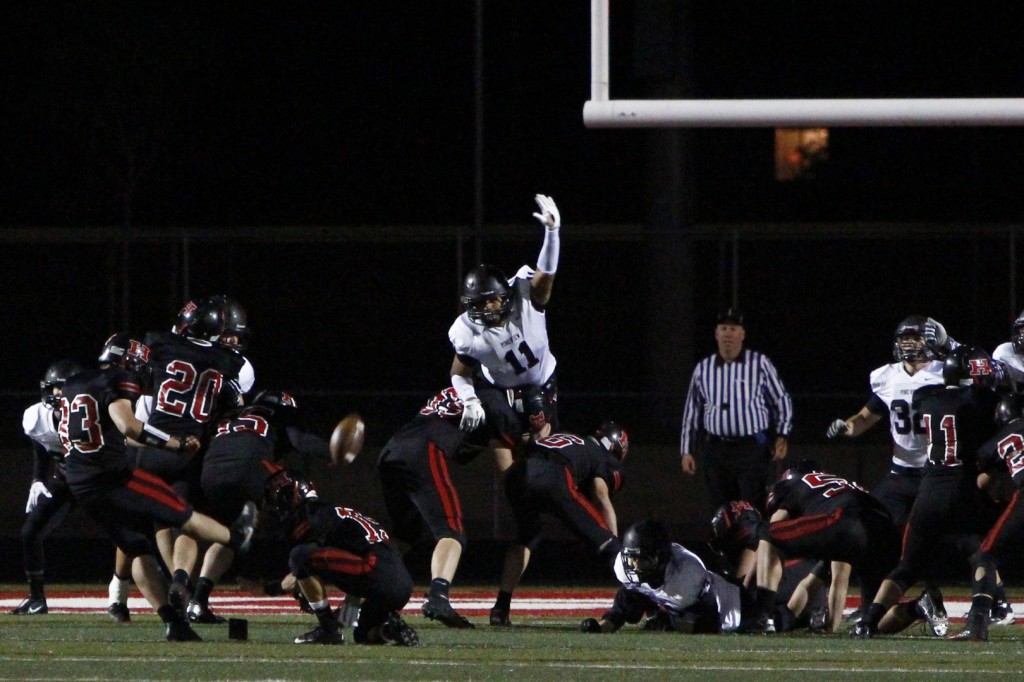 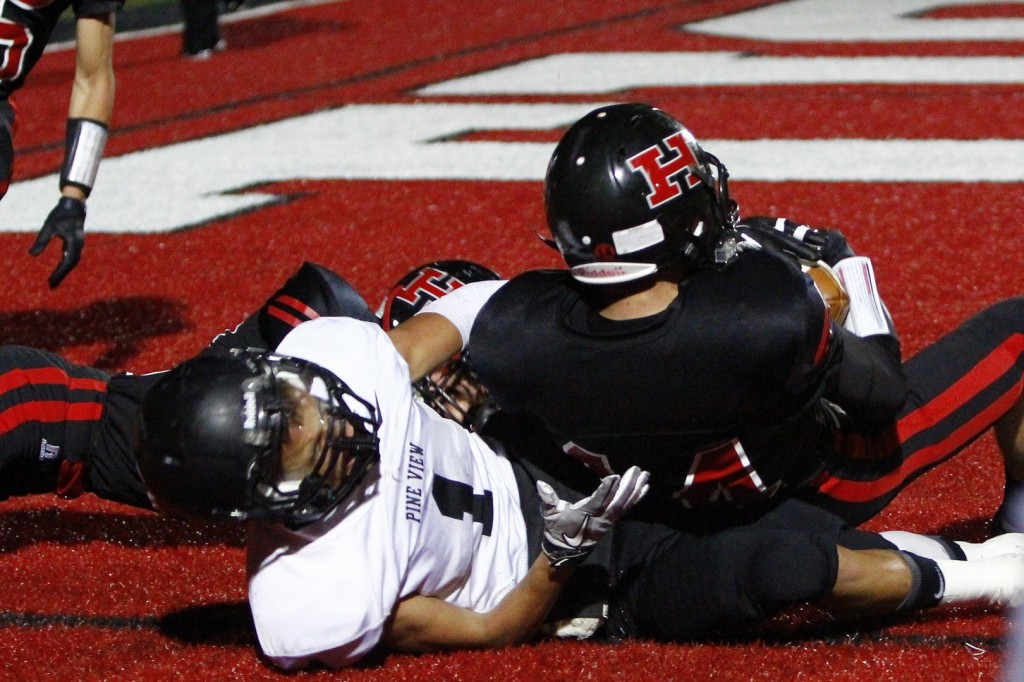