ST. GEORGE – The Utah Stealth repeated as champions of the Rocky Mountain Football League, eking out a narrow victory over the higher-seeded Dixie Rebels 31-28 Saturday night at Walt Brooks Stadium.

Defense ruled the day, despite the relatively high score. The Stealth’s D had the last laugh, stopping Dixie on a fourth-and-one play late in the game. On Dixie’s final drive of the game, the offense took the ball at its own 25-yard line. Two Sione Tapousi runs netted 10 yards and a first down. But Tapousi strained his calf muscle and would not return. The next play, a Chad Draper lateral pass was mishandled and went out of bounds, resulting in a 15-yard loss. Misi Tupe then ran the ball around, through, and over Stealth defenders for a 24-yard gain to the 44-yard line. Loveridge got a first down to midfield with a 6-yard run. After an incomplete pass, Loveridge gained nine more yards on two carries, resulting in a fourth and one at the Stealth 41-yard line with two minutes left to go. With Tapousi out, the Rebels ran a lead play with Tupe leading Loveridge up the middle. However, the Stealth defensive line created a pile and Loveridge was short of the first down.

“Obviously, if Sione (Tapousi) is available, it is a no-brainer,” said Stokes. “We give him the ball and he could fall forward to get a yard. But they made the play and stopped us when they needed to.”

The Stealth took over on downs and ran out the clock to end the game and win their second straight championship.

The game featured the league’s top two offenses, but both were shut down by the opposing defense. The Rebels managed 133 yards on the ground and 133 yards through the air, but gave up four turnovers (all interceptions). The Stealth turned the ball over twice (two interceptions) and could only muster 186 total yards, but it was enough to seal the victory.

Dixie trailed by as many as 14 points (28-14) in the third quarter and the Rebels were down 31-21 in the final minute of the third before a Tupe 5-yard run cut it to 31-28. Neither team could score in the final stanza.

Most of the night, the Rebels won the field position battle with their defense and special teams starting the offense in Stealth territory for six out of their seven first-half drives. The Rebels likely would have started every drive in Stealth territory, but Stealth punter Scott Thompson booted a monster punt from the back end of the end zone that traveled through the air for 80 yards. The Rebels average starting position was the Stealth 37-yard line. The Stealth’s average starting position in the first half was its own 24-yard line.

“Our defense and special teams really put our offense in great position, and we were able to capitalize a couple of times, but for most of the game, the offense could not get a rhythm,” Dixie coach Andy Stokes said.

The Rebels got on the board first. Defensive back Trey Smith intercepted Utah quarterback Steve Vincent in the Stealth’s first series. Unlike last week’s victory against the Revolution, where the Rebels came out passing, the Rebels opened this game with six straight runs, ending with a Chase Loveridge dive from the 2-yard line with 6:58 left to play in the first quarter.

The momentum continued for the Rebels as defensive back Brandon Thompson intercepted Vincent for a second time, giving the Rebel offense the ball at the Stealth 41-yard line. After gaining a first down, the Rebel offense stalled when Stealth linebacker Steve Lucero sacked quarterback Chad Draper. On the following play, Lucero blocked kicker Dillon Bishoff’s 42-yard field goal attempt. The block was scooped up by Stealth defensive back C.J. Ubani, who returned the block 48 yards to tie the score with 42.4 seconds left in the first quarter.

On the ensuing kickoff, Rebels slotback Justin Cummings returned the kick 43 yards. With a penalty for a late hit tacked on, the Rebels began the next drive at the Stealth 37-yard line. Four plays later, Draper hit Brennan Adams in stride for a 33-yard touchdown to go up 14-7 with 10:23 left to play in the half.

The Stealth answered quickly. Defensive back Greg Tichen matched Cummings with a 43-yard return of his own to midfield. Nine plays later, Vincent hit league-leading receiver Sam Thomas with a 3-yard pass in the flats to tie the game.

Once again Dixie’s return game placed the Rebels offense in good position when wide receiver Tarnu Ali took the ball one yard deep in the end zone for 52 yards to the Stealth 49-yard line. Moments later, however, Draper threw his first interception to Ubani.

On the next play, Draper was intercepted for the third time in three throws, this time by Tichen, who returned the pick 45 yards for a touchdown, putting the Stealth in front 21-14 with 1:44 left in the half.

Tupe returned the ensuing kickoff 76 yards to the Stealth 28-yard line, but the Rebels turned the ball over on downs and Vincent ran out the half on a kneel down.

The Stealth attempted an onside kick to start the second half, but Dixie linebacker Mike Vasquez was able to fall on the ball, once again giving the Rebels offense great field position. Another turnover turned the tide though, as Draper’s first pass of the half was tipped at the line and resulted in his fourth interception of the night.

Five plays later, Vincent capitalized on the Rebels misfortune, finding wide receiver Colten Stark for a 61-yard touchdown to stretch the lead to 28-14 with 8:05 left in the third quarter.

The Dixie offense took only five plays to put its next touchdown on the board, with Draper hooking up with tight end Robert Robledo on a 26-yard toss to cut the lead to 28-21 with 6:12 to play in the third.

The Rebels were flagged for unsportsmanlike conduct for celebrating the score too much. That would prove critical on the ensuing kickoff because Bishoff had to kick from his 20, instead of the 35-yard line. Thomas returned the kickoff 28 yards to the Dixie 42. An additional 15 yards were assessed for a facemasking penalty and the Stealth had their lone starting position of the night in Dixie territory at the 27-yard line.

The Dixie defense held again, but Thompson booted a 41-yard field goal to put the Stealth ahead by two scores, 31-21, with 4:22 left to play in the third.

Ali had another good return for 42 yards to the Rebels 40-yard line. Dixie sustained a balanced drive as Tupe scored on a 5-yard run with less than one minute left in the quarter to cut it to 31-28.

The first few drives of the fourth quarter were once again dominated by the two defenses as both teams traded punts. Dixie’s final drive went 34 yards, into Utah Stealth territory, but the big fourth down stand by the defending champs proved to be the difference.

Stealth defensive back Harold Ragin was named the MVP of the game with two interceptions and a tipped ball that resulted in a third interception.

Stokes also announced that he and fellow coach Wayne Alofipo had coached and played in their last game with the Rebels. 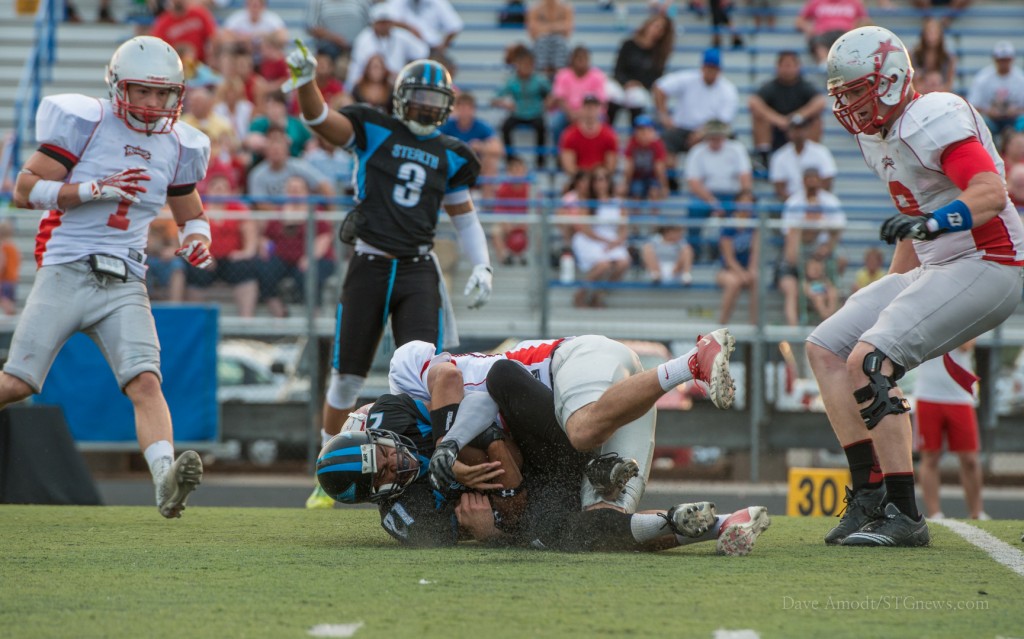 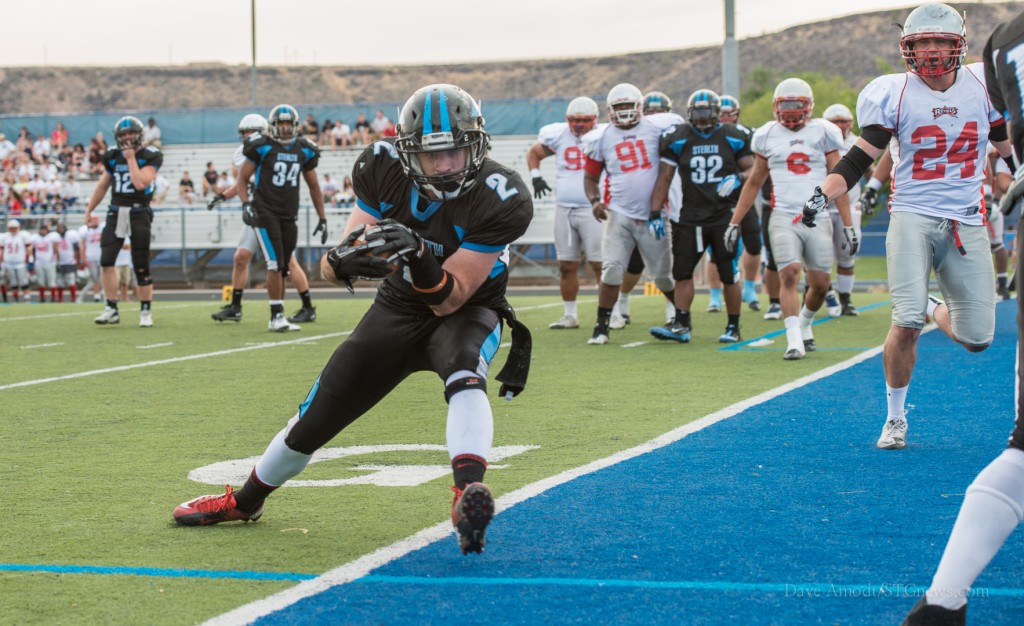 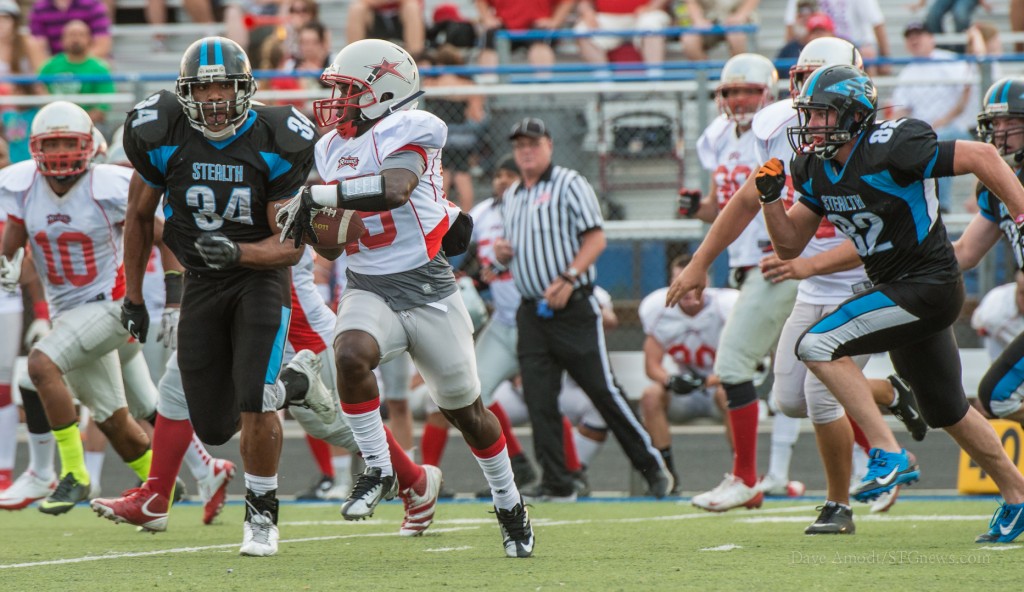 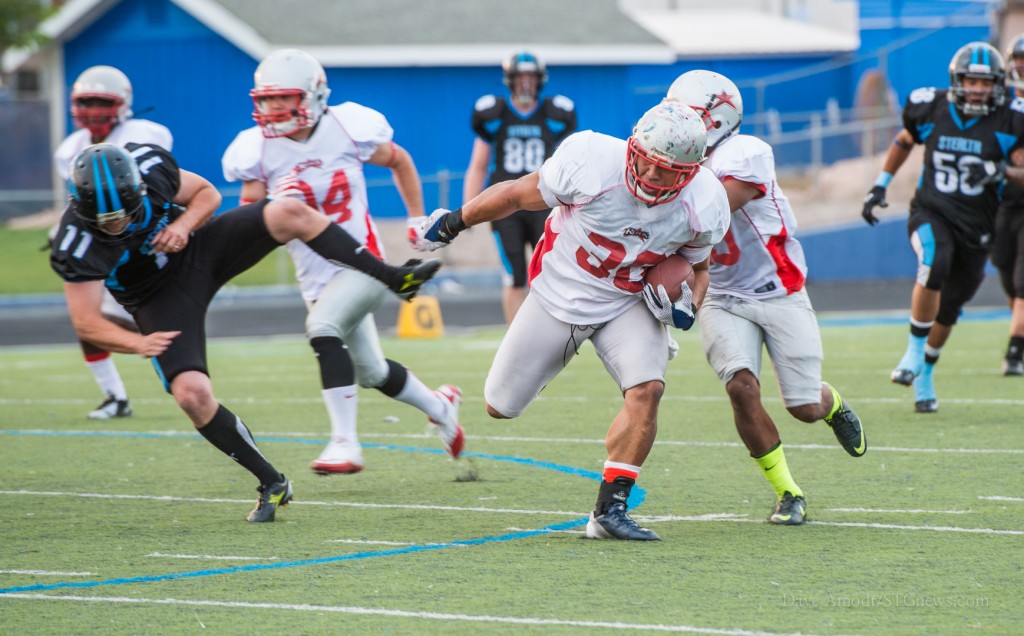 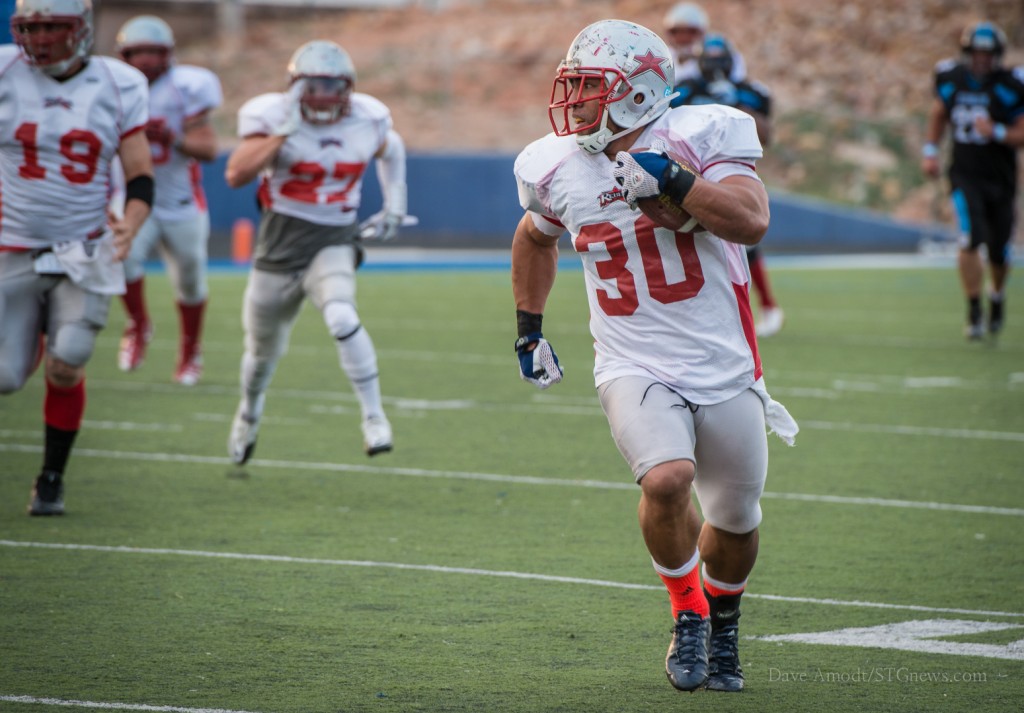 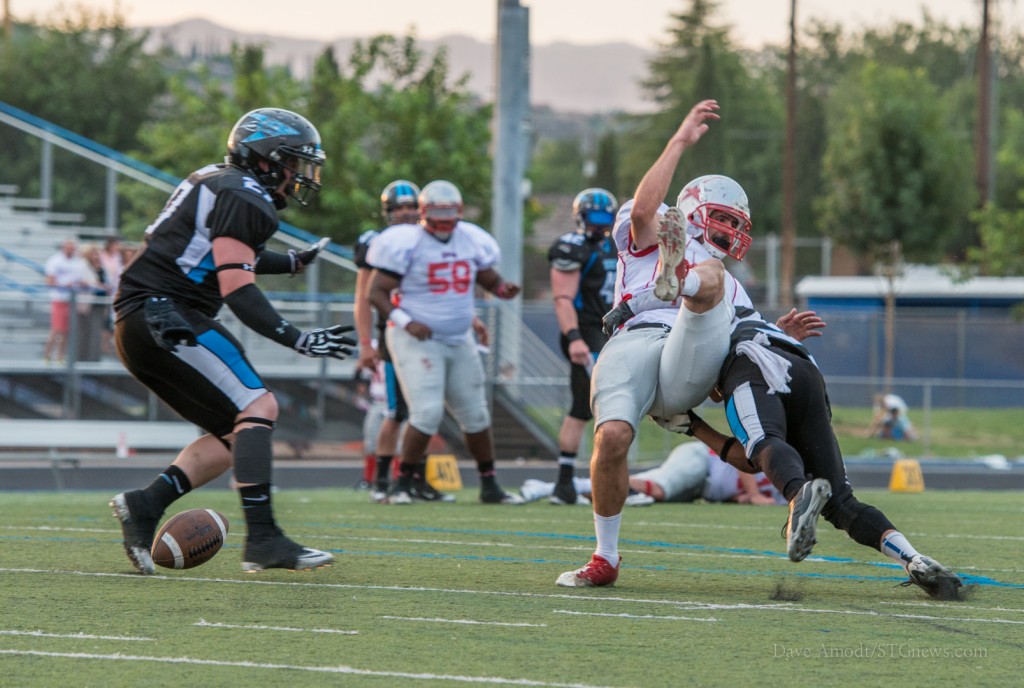 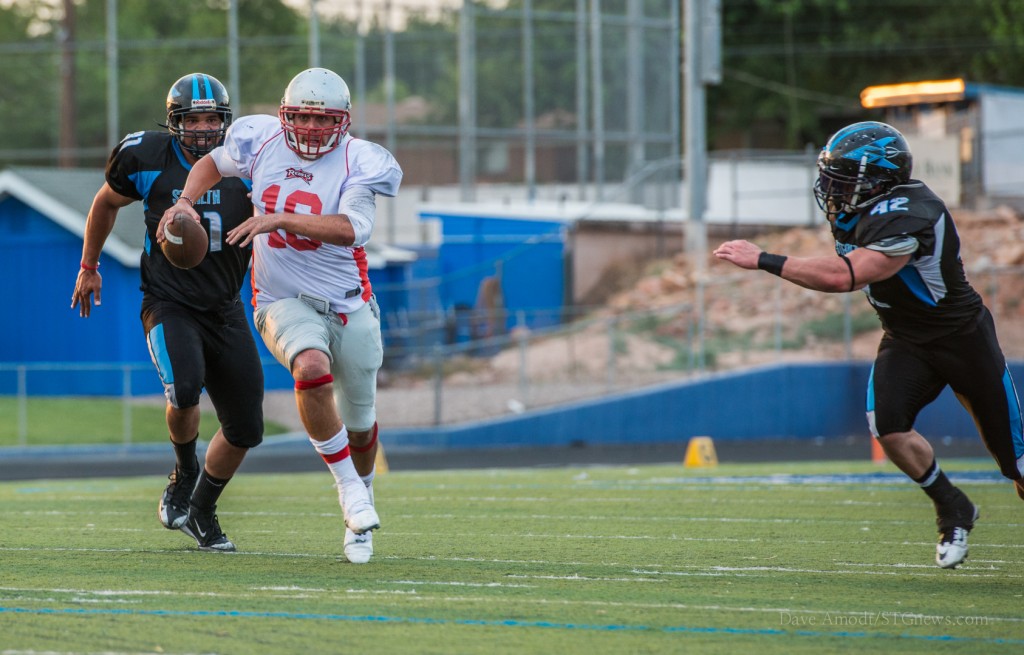 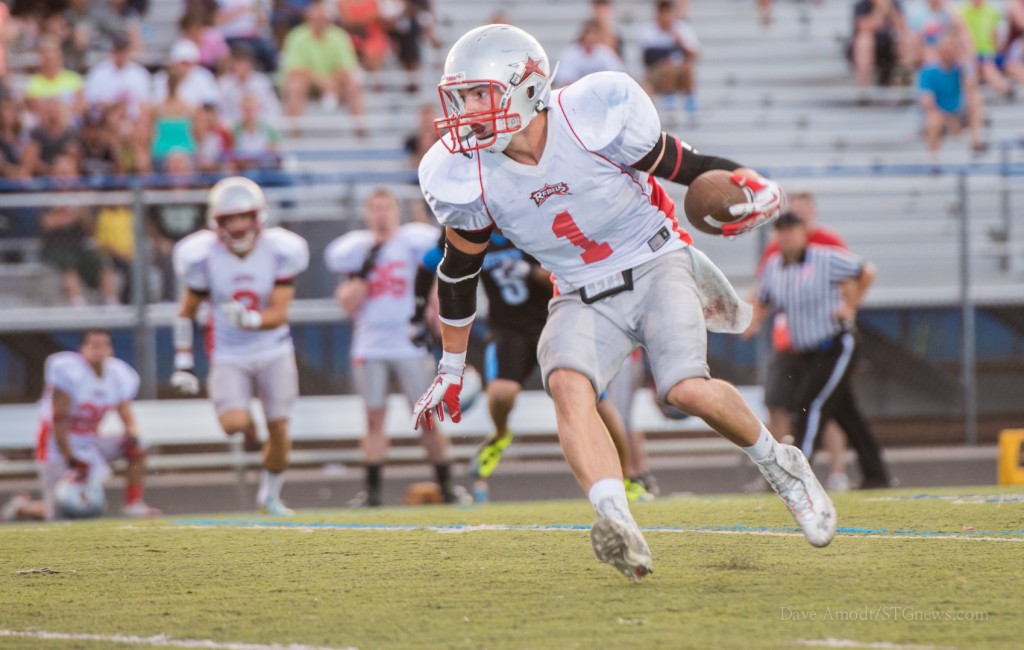 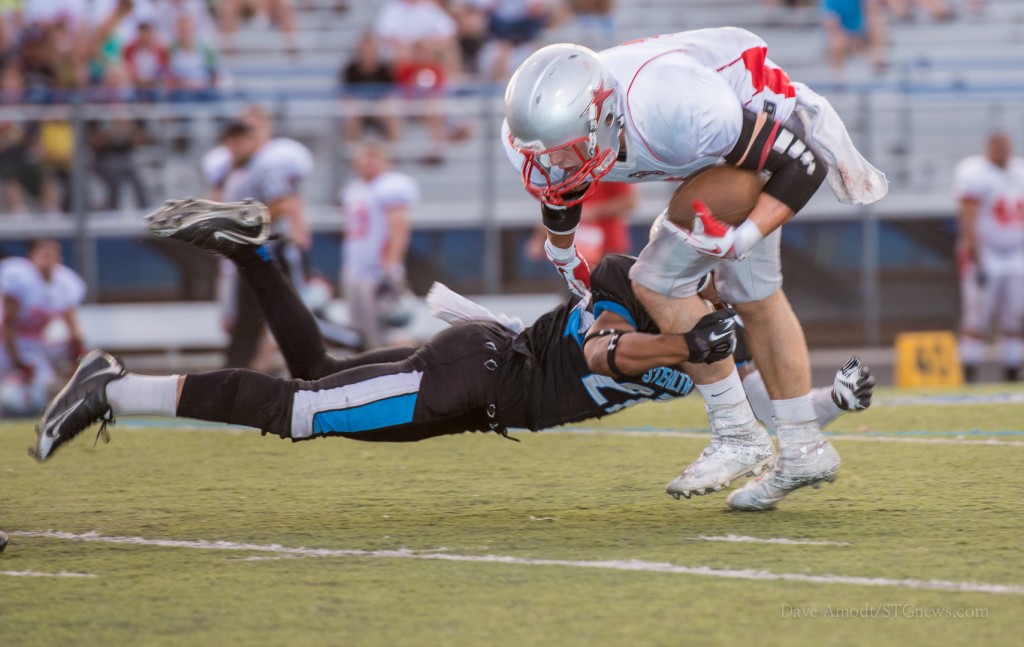 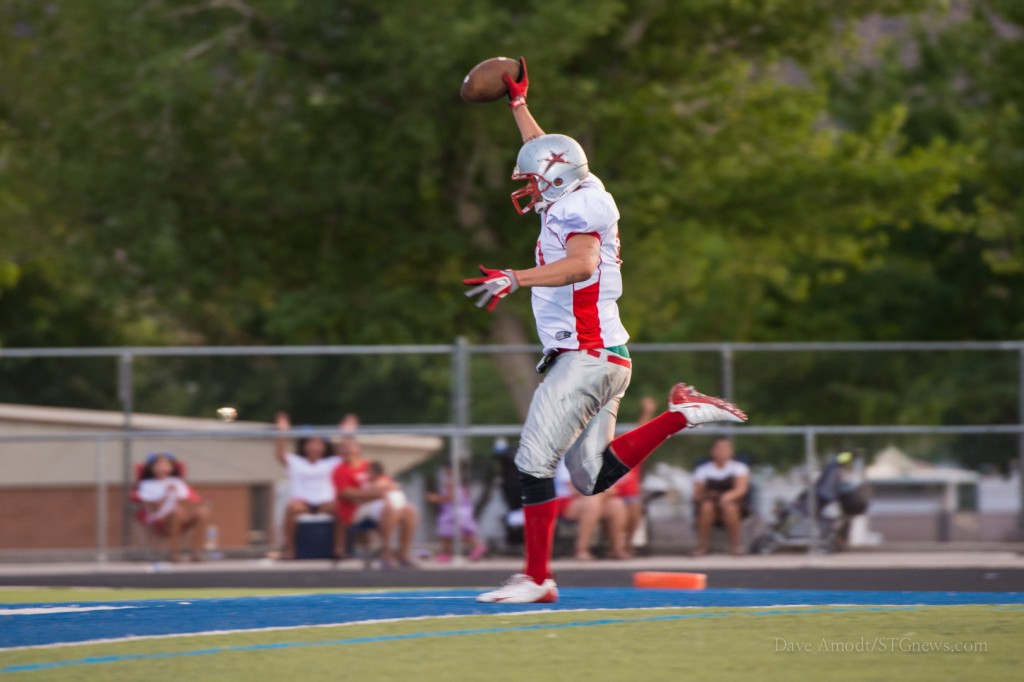 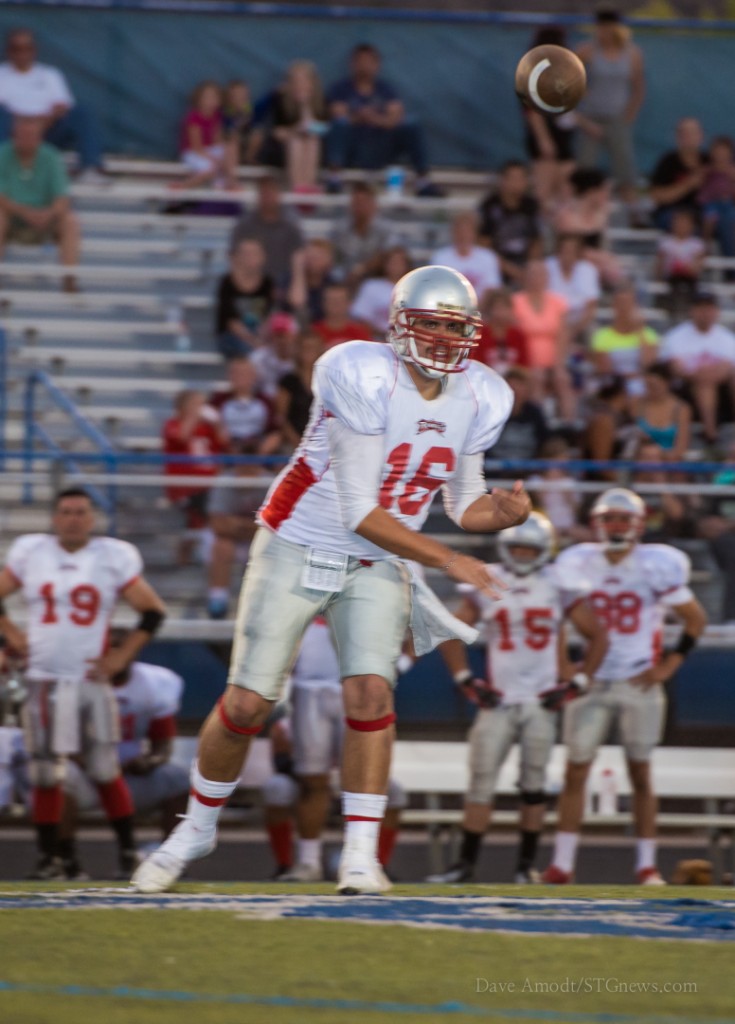 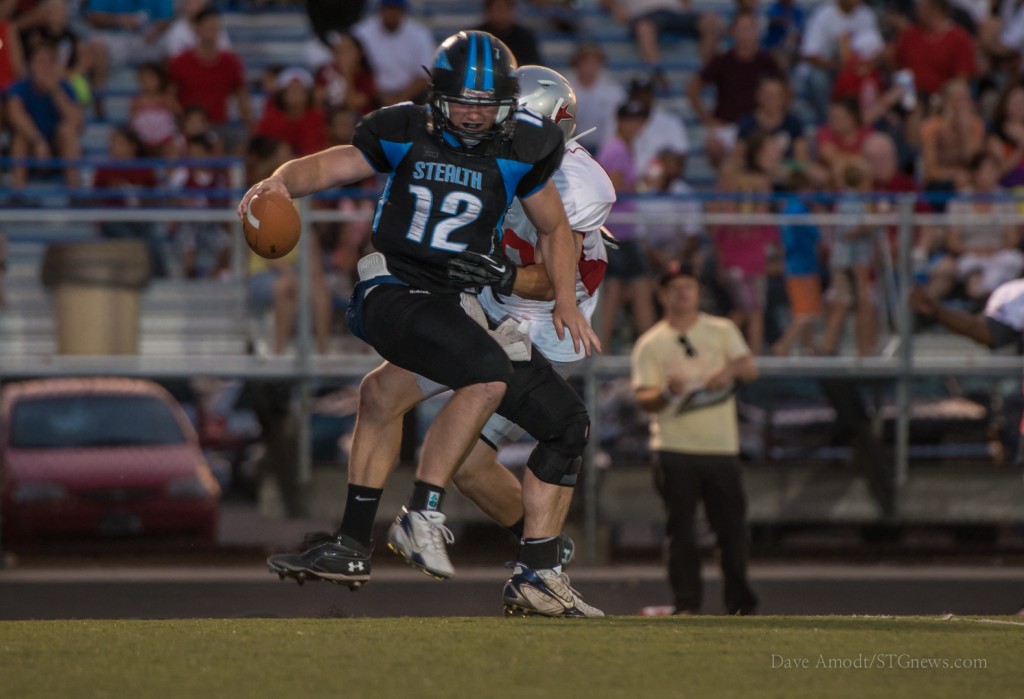 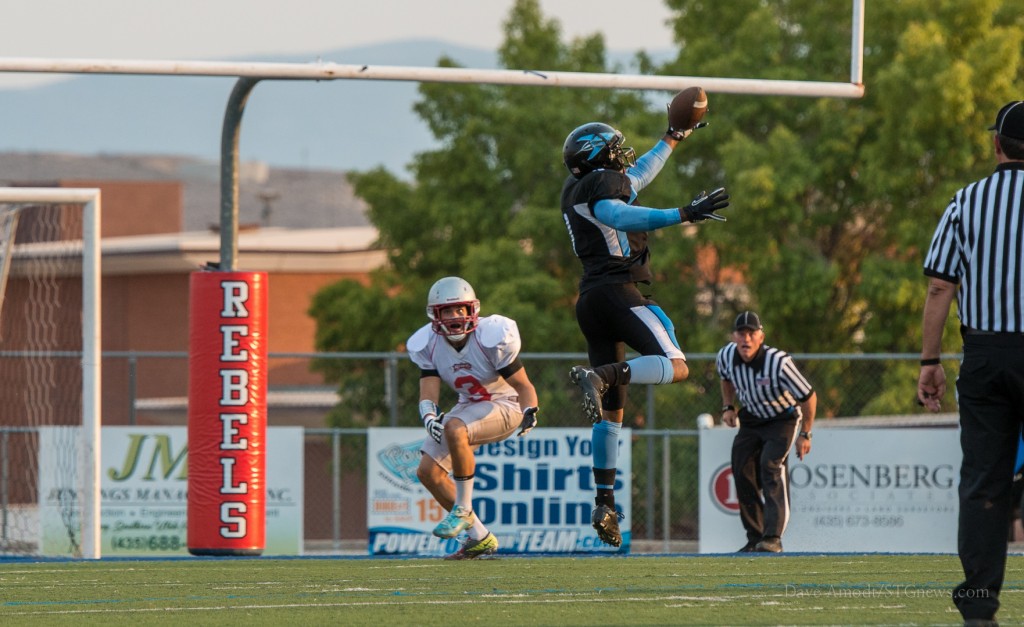