ST. GEORGE – Folk wisdom tells us that if we want to know what a man is really like, ask his wife. The man in question, Merrill Matzinger, will celebrate his 98th birthday on Friday, May 10, but he doesn’t look 98 or even 78.

He works out for two hours a day at Elevation Fitness, a new wellness center in the Sunset Plaza at 1091 North Bluff, and he inspires patrons and staff alike. His biceps are rock-solid, legs muscular, belly flat. Since Merrill Matzinger does 1,500 crunches every day before he arrives at the gym, he undoubtedly sports a six-pack under his coral T-shirt.

He reveals a clear mind, furnished with substantial values and a generous measure of wit. Merrill Matzinger’s eyes twinkle with mischief, yet he is both appreciative and magnanimous. His wife, Mary Lou Matzinger said, “My husband comes from a privileged life, but he is unspoiled.” As she lists his many gifts and abilities it is clear that she is still in love with this man she met at a dinner party engineered by mutual friends nearly 37 years ago.

That Merrill Matzinger can play classical and flamenco guitar as well as paint prolifically enough to have his own exhibit is impressive in its own right. That at 98 his intensity and commitment outstrips younger gym-goers—and everyone is younger than Merrill Matzinger—motivates everyone. That he does all this while being legally blind is mind-boggling.

Merrill Matzinger has struggled against blindness since he was 11 years old, when macular degeneration set in. He refused to learn Braille and to carry a cane. Instead, he used his extraordinary memory and fierce independence to negotiate his way through a prosperous and adventurous life. He could not read, but he memorized what he heard, and can quote long passages of Shakespeare and other bards and philosophers. He remembers people and the details of their lives through their voices. His fight to lead a powerful life, despite encroaching blindness, solidifies to his commitment to health and fitness.

His appreciation for health came from losing it.

“I’m the luckiest person I know,” Merrill Matzinger said. “The key ingredient to my health is in being sick when I was little.”

He survived the Influenza Pandemic of 1918 (which took more than 20 million lives) when he was only 3 years old even though the mortality rate was highest among the very young and the very old. He also survived a ruptured appendix when he was 12, in the days before penicillin or other antibiotics could control sepsis.

Merrill Matzinger credits his parents for encouraging his well-being: “I had three fathers: my real father, my stepfather, and my uncle. And I had a very courageous mother.”

He has lived through interesting times in pivotal places: In Cuba, Merrill Matzinger married a flamenco dancer and studied guitar (under Montoya, one of the greats) during Castro’s rise to power. In northern Utah, he built a cabin at Alta when ski runs were being shaped and skiing emerged as a winter sport. In northern California when transformational consciousness engulfed the Big Sur area and the anti-war movement gathered steam, he took seminars from the likes of Fritz Perls, the founder of Gestalt therapy. He listened to these groundbreaking instructors and to the waves booming against the cliffs of Big Sur.

“It was like a heartbeat,” Merrill Matzinger said of his instruction in Big Sur. “It made you connect with a deeper consciousness of what was being taught.”

This holistic approach to life characterizes Merrill Matzinger today. According to a report at KSL.com in June 2010, the first thing Merrill Matzinger does when he awakens is to get on his knees and thank God he is alive. Then he does his 1,500 crunches and has breakfast. Most days Merrill Matzinger is at the gym before noon, working out on the strength-building machines. As he explores the machines and finds those that interest him, he adds to rather than subtracting from the weight left by the previous user. Merrill Matzinger emphasizes the importance of being “steady and consistent” in working out:

“The key,” he said, “is in wanting to work out. Or, if you don’t want to, the key is in choosing to work out. It needs to be important. Don’t let it be the first thing that drops from your schedule when you’re busy.”

He enjoys the gym itself, the reflection and rigor that is possible with devoted exercise. But Merrill Matzinger also enjoys being an inspiration to others, particularly when people have said, “I hope I can be like you.”

Scott Smith is married to Elevation Fitness owner, Anna Marie Smith, a longtime trainer who has worked with winners at the Big Loser resort. He can’t say enough good about Merrill Matzinger.

“People come here to be well,” Smith said. He cherishes the example, inspiration, and conviviality Merrill Matzinger brings to the gym. “He meets someone and two weeks later remembers their names, their careers, their children. I’m 50 and I have my vision, but I don’t remember details like that.”

Merrill Matzinger regards his struggle with vision as a blessing:

“My handicap with my eyes has become a reason to go beyond. It has also made seeing an increasingly precious remnant. The view through the keyhole is the very best view—if that’s all there is.”

And then, Merrill Matzinger shares one of his many nuggets of wisdom: “If you can see anything, you can see everything.” 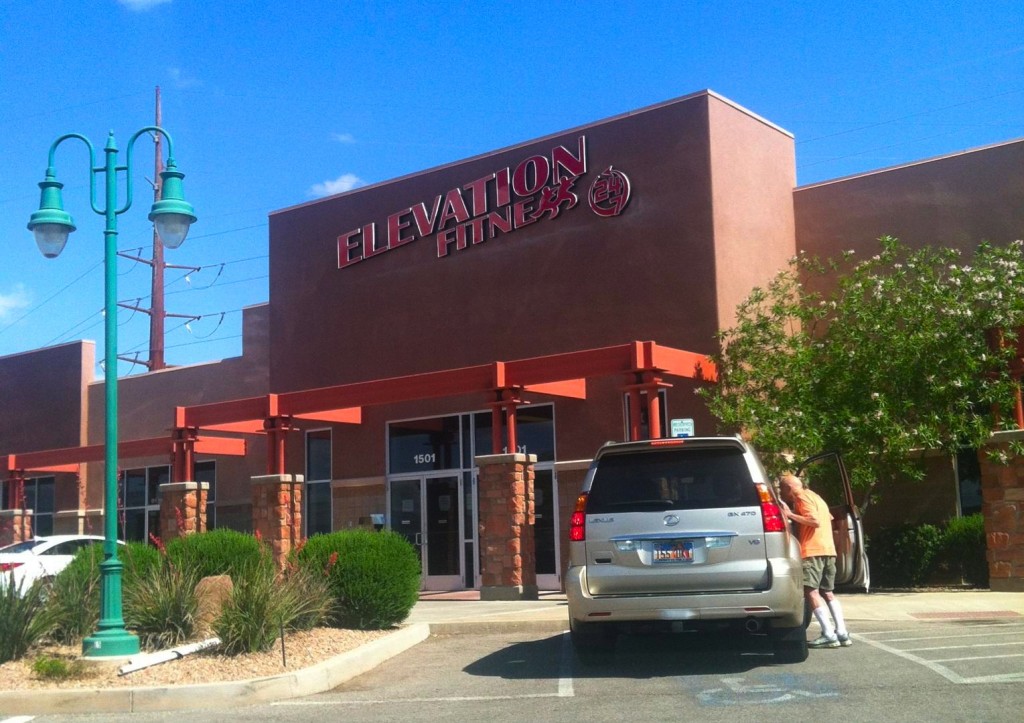 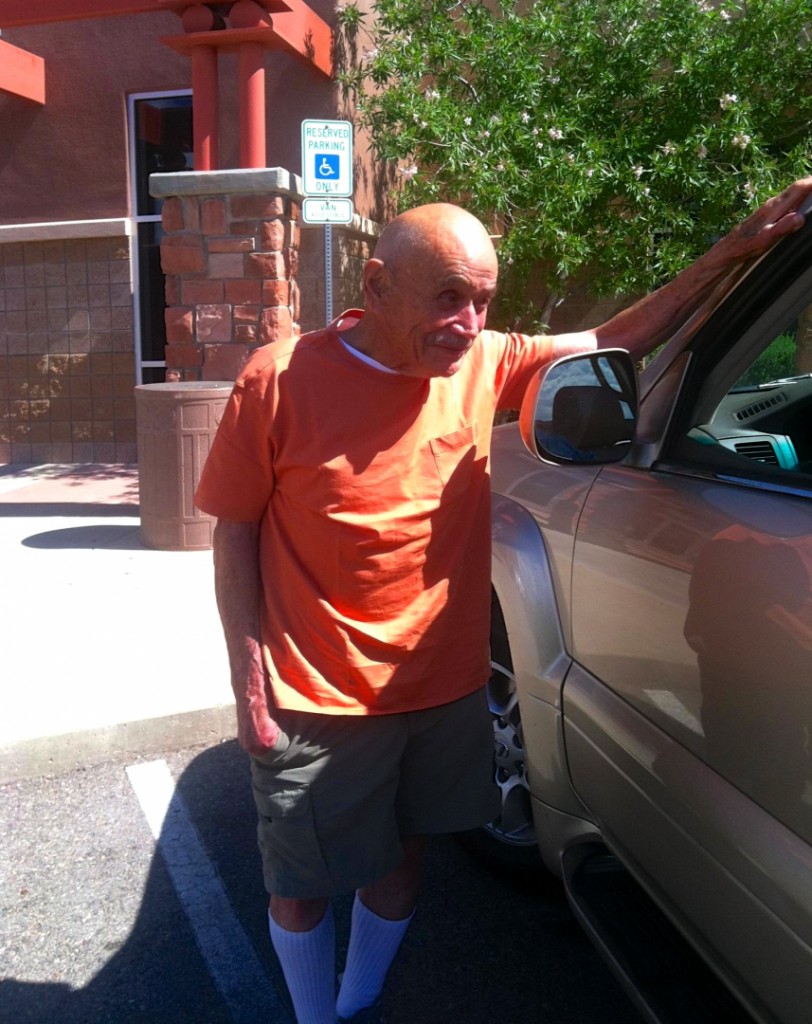 Merrill Matzinger bids adieu to his wife as he arrives at Elevation Fitness for his morning workout. St. George, Utah, May 8, 2013 | Photo by Dorothy Allred Solomon, St. George News 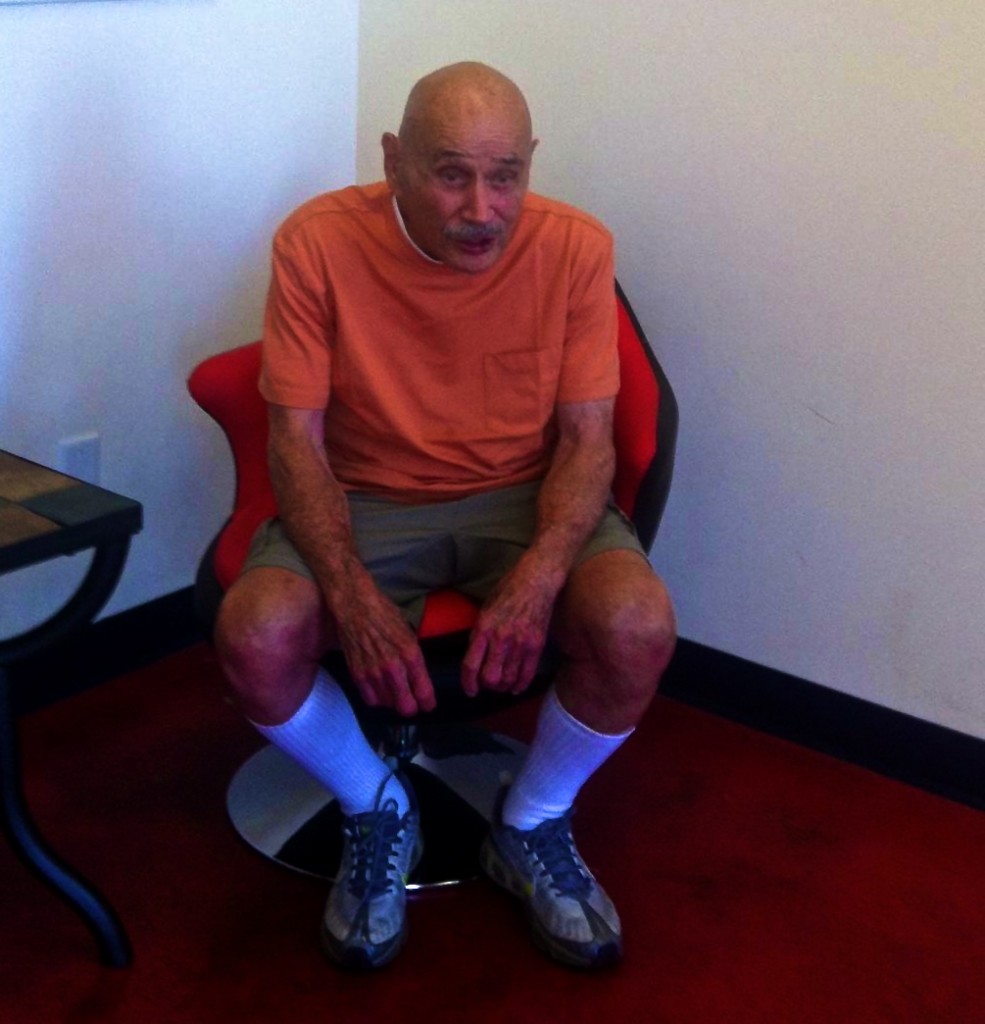 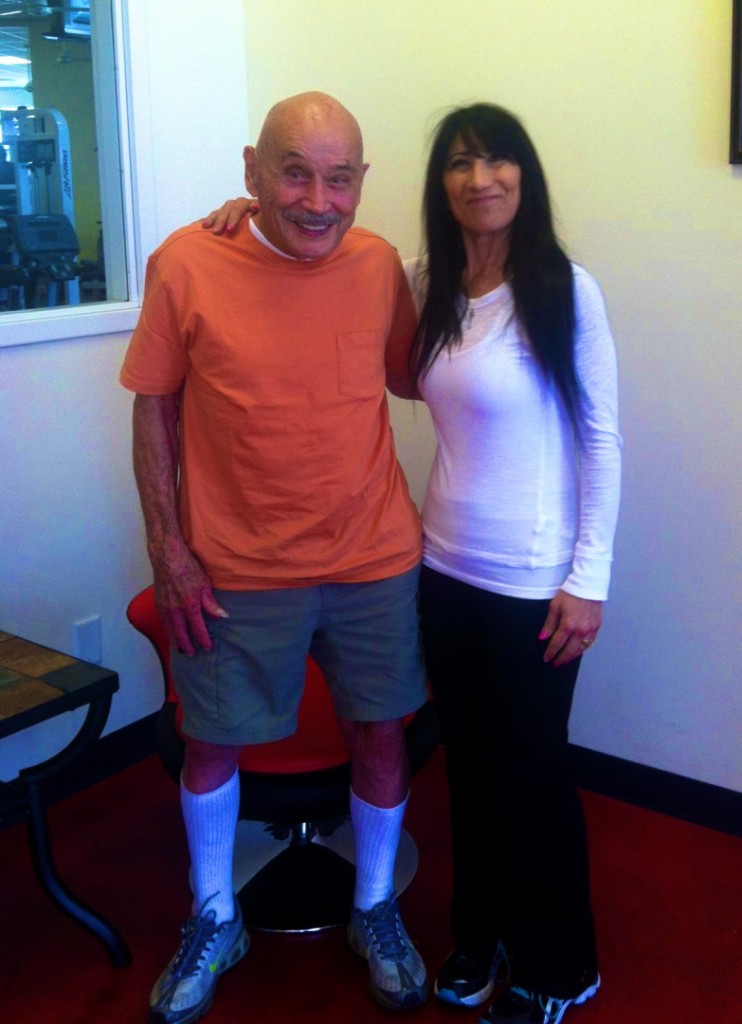 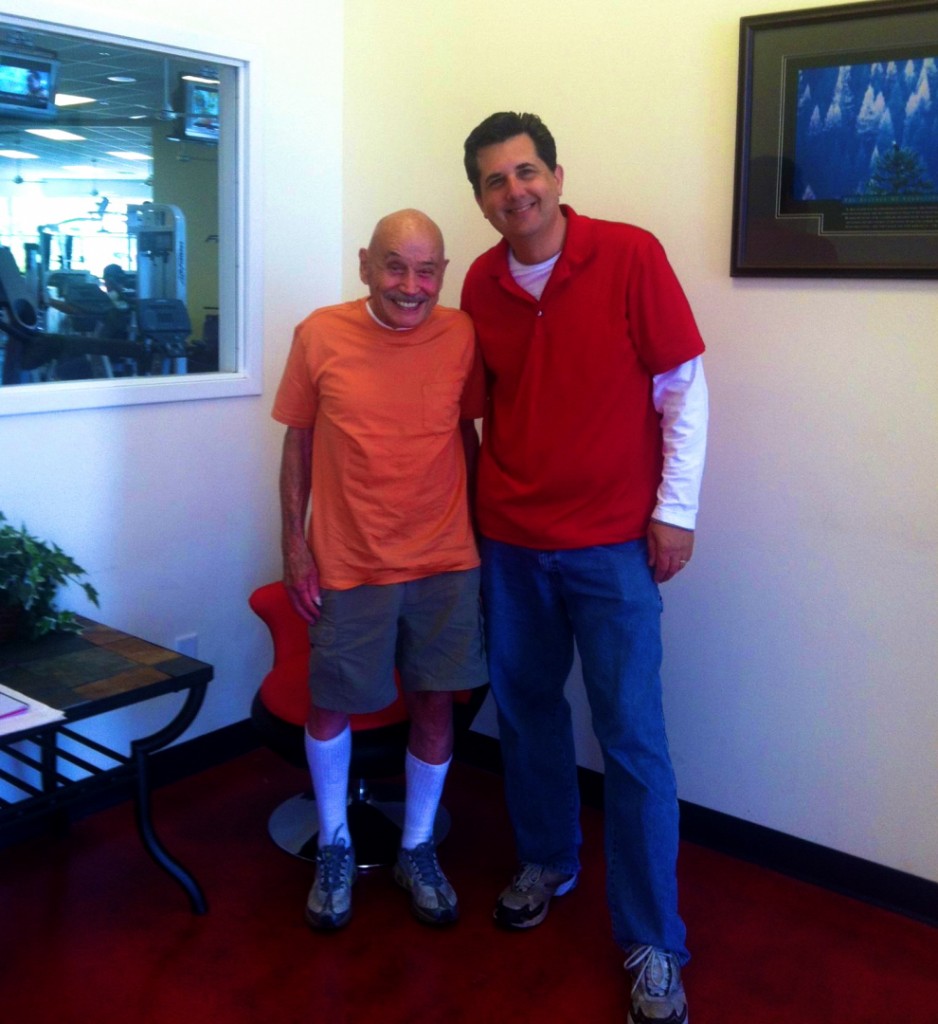 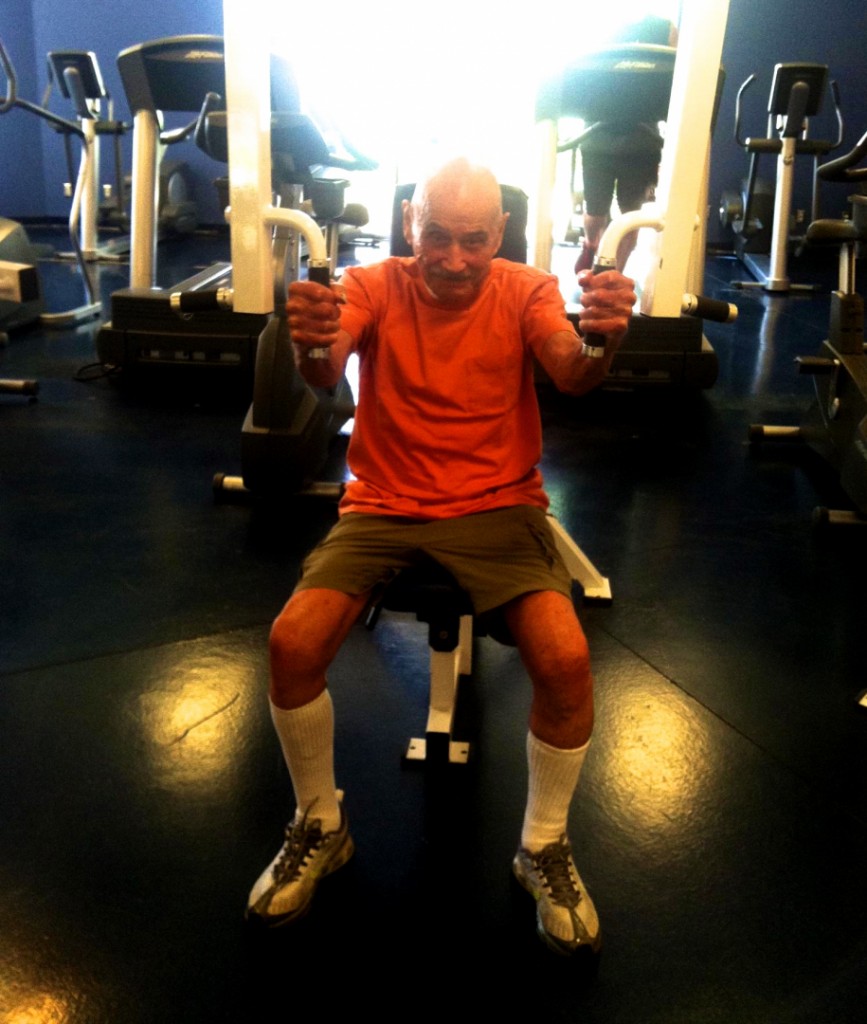